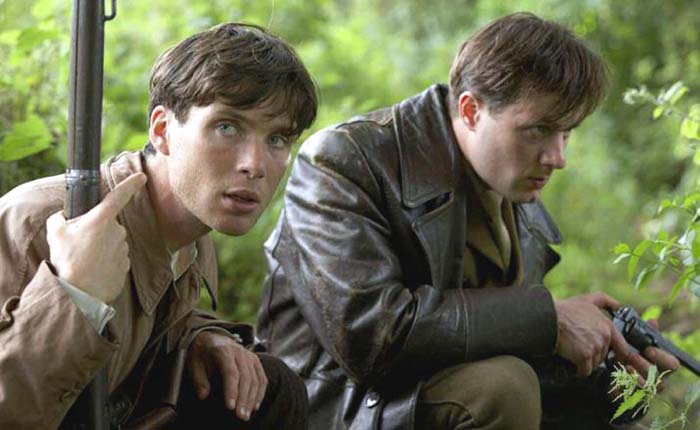 13th-time lucky: Veteran Ken Loach’s British-Irish political drama The Wind That Shakes the Barley, a depiction of the early 20th-century Irish rebellion against British rule, won the Palme d’Or at this year’s edition of the Cannes Film Festival.

Upon accepting his award, the 69-year-old British filmmaker – the oldest director with a film in competition this year, which happens to be his thirteenth time at Cannes – remarked that he hoped his film was “a little step in the British confronting their imperial history,” adding, “Maybe if we tell the truth about the past, we can tell the truth about the present.” Written by Paul Laverty, The Wind That Shakes the Barley stars Cillian Murphy, Padraic Delaney, and Liam Cunningham.

The runner-up was Grand Prix winner Flandres, another war film – in this case about an unnamed modern war that could be seen as an analogy to either Iraq or Afghanistan. Directed by controversial French filmmaker Bruno Dumont, Flandres made some viewers uncomfortable because of its downbeat view of humanity. Dumont had already won the Grand Prix in 1999, when his L’Humanité, which follows the investigation on the rape and murder of an 11-year-old girl in a small French village, created an uproar.

“I think this award really belongs to Pedro. You are the greatest, the greatest. Thank you so much for what you do for women,” remarked Penélope Cruz upon accepting – along with fellow actresses Carmen Maura, Lola Dueñas, Blanca Portillo, Yohana Cobo, Chus Lampreave – the group Best Actress Award for their performances in Pedro Almodóvar’s Volver / Return, the story of a ghostmother who tries to make peace with her two living daughters, and probably the favorite film at the festival. As a consolation prize, Almodóvar took home the Best Screenplay Award.

The Best Director was Alejandro González Iñárritu for Babel, a contemporary tale inspired by the biblical fable, and starring Brad Pitt, Cate Blanchett, and Gael García Bernal, among others, as Earthlings who, despite all the currently available modern technology, can’t find the means to communicate with one another.

The Best Actor Award also went to a group of players: Jamel Debbouze, Samy Nacéri, Roschdy Zem, Sami Bouajila, and Bernard Blancan, the stars of Rachid Bouchareb’s Indigènes / Indigenous, another war movie, this one about North African men who’d never set foot in France but who are called to save the Motherland from the Nazi menace.

Among the other awards were the Jury Prize to Andrea Arnold’s thriller Red Road, the story of a surveillance center worker with voyeuristic tendencies; the Camera d’Or for Best First Film to Corneliu Porumboiu’s A Fost sau na fost? / 12:08, East of Bucharest, described by The New York Times as “a mordant look back at Romania’s 1989 Revolution”; and the Palme d’Or for Best Short Film to Sniffer, by Norwegian director Bobbie Peers.

* Seven of Loach’s films were shown in competition in previous years.

Deepa Mehta’s controversial Indo-Canadian production Water, which depicts the plight of Indian widows during the Gandhi era, has won the Golden Kinnaree for Best Film at the 2006 Bangkok International Film Festival. In 2000, while making the film in India Mehta received death threats from Hindu radicals, and was thus forced to abandon production for several years. Five years later, she resumed working on the film in Sri Lanka. Water, a sizable box office hit in Canada, has been nominated by the Academy of Canadian Cinema & Television for nine Genies, including Best Film and Best Director.

Other winners at the Bangkok Festival were Best Director Park Chan-Wook for Chinjeolhan geumjassi / Lady Vengeance, Best Actor Presley Chweneyagae for his thug with a heart in the Academy Award nominated Tsotsi, and Best Actress Felicity Huffman for her (truly outstanding) performance as a pre-op transsexual in Transamerica.

Honorable Mentions: Ballets Russes, by Dan Geller and Dayna Goldfine (United States), and In the Shadow of the Palms, by Wayne Coles-Janess (Australia)

The 59th Cannes Film Festival will open on May 17. The awards will be announced on May 28.

Other winners include Best Director Goran Dukic for Wristcutters: A Love Story (U.S.), a comedy set in a way station for those who have committed suicide; Best Actor Ryan Gosling for his drug-addicted teacher in Half Nelson (U.S.); and Best Actress Fiona Gordon for her Jacques Tati-esque character in L’iceberg / The Iceberg (Belgium).

The 2006 Seattle International Film Festival was held between May 25-June 18.

The 2006 Shanghai International Film Festival was held between June 17–25.

Chalachithra Ratna Award: Thilakan, for his contributions to the Malayalam film industry

Kerala is a state in southern India. Most of the population speaks the Malayalam language.