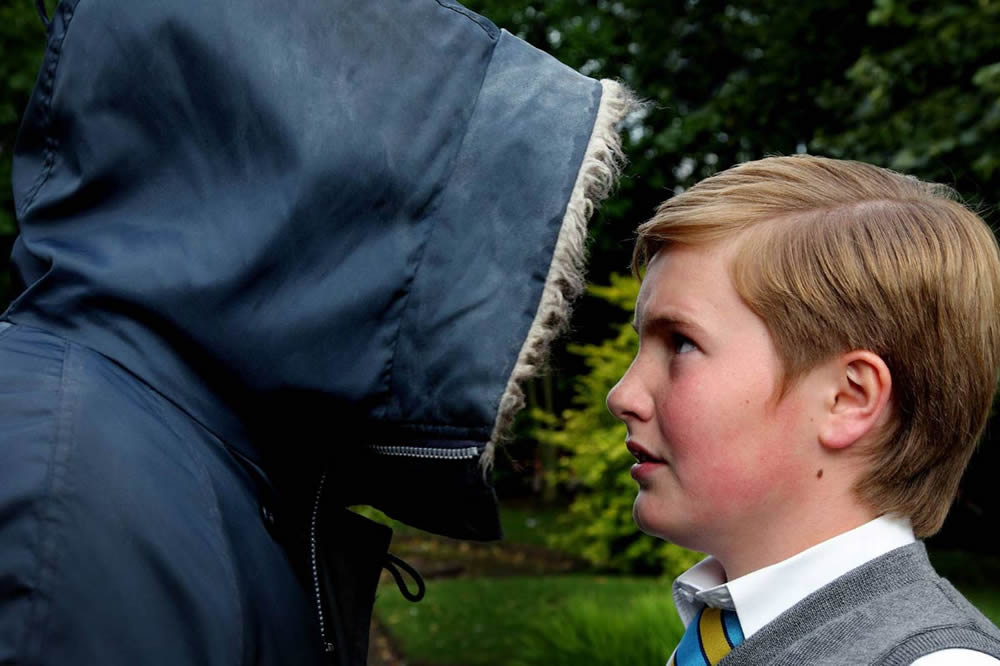 Peter Mullan’s Glasgow-set drama Neds, about a distraught teenager who joins a street gang in the early 1970s, won the Golden Shell for Best Film at the 2010 edition of Spain’s San Sebastian Film Festival, which came to a close this past weekend. As the sensitive teen-turned-gangbanger, newcomer Conor McCarron was given the Silver Shell for Best Actor. (See below list of San Sebastian Film Festival winners.)

Mullan, whose The Magdalene Sisters won the 2002 Venice Film Festival’s Golden Lion (and the Vatican’s wrath), is currently working as an actor on Steven Spielberg’s World War I drama War Horse. Mullan’s acting, in fact, has earned him honors as well, including the Best Actor award at Cannes in 1998 for his performance in Ken Loach’s My Name Is Joe.

Neds is one of the gala events at next month’s London Film Festival.

Raoul Ruiz, currently recovering from cancer, won the Silver Shell for Best Director for the four-hour Misterios de Lisboa / Mysteries of Lisbon, a series of stories about human relationships based on a book by Portuguese author Camilo Castelo Branco.

The Best Actress winner was Nora Navas for Pa Negre / Black Bread, Agusti Villaronga’s Catalan drama set in the aftermath of the Spanish Civil War, while the Best Screenplay trophy went to writer-director Bent Hamer for Home for Christmas, a series of vignettes set in a small Norwegian town and based on author Levi Henriksen’s tales.

SPECIAL MENTION to
“A JAMAÂ” by DAOUD AOULAD-SYAD (Morocco-France) For the complexity achieved by a simple story.

SPECIAL JURY PRIZE to
“ELISA K” by JUDITH COLELL and JORDI CADENA (Spain) For the way it portrays the violence to which innocent people are exposed to in everyday life.

Those semi-finalists, most of which are co-productions hail from 32 countries, chiefly Germany (nine titles), France (seven), the United Kingdom (five), and Italy (five). Titles released in 2009 are included because the European Film Awards – to its detriment – don’t follow the calendar year.

According to EFA rules, “in the 20 countries with the most EFA Members, these members have voted one national film directly into the selection list.” To complete the list of semi-finalists, a Selection Committee consisting of EFA Board Members and “invited experts” Gunnar Bergdahl (Sweden), Pierre-Henri Deleau (France), Stefan Kitanov (Bulgaria), Derek Malcolm (UK), and Nikolaj Nikitin (Germany) added an unspecified number of films.

In the coming weeks, the 2,300 European Film Academy members will vote for the nominations in the various categories.

The Gotham Awards signal the official beginning of awards season in the US. Last year’s Gotham Award winner for Best Film, Kathryn Bigelow’s The Hurt Locker, went on to win the Best Picture Oscar as well.

The Gotham tribute recipients usually consist of talent/executives with a link to a movie with Oscar potential. This year, veteran Robert Duvall is a possible Best Actor contender for Get Low; Hilary Swank could get a Best Actress nod for the upcoming Conviction; the Gothams’ 1998 Breakthrough Director Darren Aronofsky’s Black Swan has already received quite a bit of awards-season buzz; and James Schamus, winner of the Producer Award in 1997, is the CEO of Focus Features’, which distributed likely Best Film contender The Kids Are All Right.

Nominations for the 20th Gotham Independent Film Awards will be announced on October 18.

The information below is from the Independent Filmmaker Project’s press release:

A leading man since the 1960s, ROBERT DUVALL (Felix Bush) has specialized in taciturn cowboys, fierce leaders and driven characters of all types. Respected by his peers and adored by audiences worldwide, he has earned numerous Oscar® nominations for his performances in The Godfather, Apocalypse Now, The Great Santini and The Apostle. Duvall won the Academy Award® as Best Actor for his role in Tender Mercies, and later earned the Golden Globe for his performance in the title role of HBO‘s Stalin. More recently, Duvall was honored with the Golden Globe and Emmy Award for his iconic portrayal of Print Ritter in AMC‘s Broken Trail. Duvall made his big screen debut in 1962, as the creepy Boo Radley in To Kill A Mockingbird. He has gone on to star in such classics as Bullitt, True Grit, M*A*S*H, The Conversation, Network, The Natural, Colors, Days Of Thunder, A Handmaid’s Tale, Rambling Rose, Wrestling Ernest Hemingway, Phenomenon, A Civil Action, Open Range, and Thank You For Smoking, among many others. As a director and producer, Duvall got behind the camera for his labor of love project The Apostle in which he also starred. The film went on to earn many accolades, including being named on over seventy-five film critics and Top 10 Films for 1997 lists. He also wrote, produced and starred in Assassination Tango.  Duvall was most recently seen as the Old Man in The Road, based on the novel by Cormac McCarthy and Get Low.

HILARY SWANK is the third youngest woman in history to win two Academy Awards® for “Best Performance by an Actress in a Leading Role.” In addition to the Oscar for her performance in Boys Don’t Cry, Swank won the Golden Globe Award, The New York Film Critics Circle, The Los Angeles Film Critics Association, The Chicago Film Critics and The Broadcast Film Critics Association awards for Best Actress. Swank then appeared in Sam Raimi’s, The Gift, in Christopher Nolan’s, Insomnia, and in the acclaimed HBO telefilm Iron Jawed Angels for which she was honored with both SAG and Golden Globe nominations for her performance. In 2004, Swank starred opposite Clint Eastwood and Morgan Freeman as the title character in Eastwood’s Million Dollar Baby. For this performance, she was honored with her second Academy Award® for Best Actress and also garnered prizes from the National Society of Film Critics, the Screen Actors Guild, The Broadcast Film Critics, and a Golden Globe for “Best Lead Actress in a Drama.” Swank has since starred in PS I Love You, Freedom Writers and this year’s much anticipated, Conviction, in which she plays Betty Anne Waters, a true life hero and mother who spent 18 years working her way through school to get her brother released from prison for a wrongful murder conviction.

DARREN ARONOFSKY exploded on the independent film scene with his 1998 Sundance Film Festival-winning film, ?, where he received the Best Director award as well as accolades across the independent film world, winning the 1998 Breakthrough Directing Award from the Gotham Independent Film Awards as well as an Independent Spirit Award.  Aronofsky then went on to direct the films Requiem for a Dream, for which Ellen Burstyn received both a Golden Globe and an Academy Award® nomination; The Fountain, starring Hugh Jackman and Rachel Weisz and The Wrestler, which garnered Academy Award® nominations for its stars Mickey Rourke and Marisa Tomei and won Best Picture at the Independent Spirit Awards.   Aronofsky’s upcoming film, Black Swan, which will be released in December, stars Natalie Portman, Vincent Cassell, Mila Kunis, Barbara Hershey and Winona Ryder.  Black Swan opened the 2010 Venice Film Festival and received critical acclaim at this year’s Toronto Film Festival.

An integral contributor to the American independent film business for over two decades, JAMES SCHAMUS has the unique distinction of being an award-winning screenwriter and producer who is also a film executive. Additionally, he is Professor in Columbia University’s School of the Arts, where he teaches film history and theory. His published work in the field includes “Carl Theodor Dreyer’s Gertrud: The Moving Word,” published in 2008. Prior to the formation of Focus Features, Schamus was co-president of the independent film production company Good Machine, which he co-founded in 1991. Schamus and his partners at the company produced over 40 films during an 11-year period, in partnership with filmmakers such as Ang Lee, Todd Solondz, and Nicole Holofcener. Through its financing and distribution arm, Good Machine International, the company represented dozens more filmmakers, among them Pedro Almodóvar and the Coen Brothers. Good Machine was honored with a 10-year retrospective at the Museum of Modern Art in New York City, and Schamus was honored with the 1996 Gotham Award for Producing with his producing partner Ted Hope. Schamus is also a screenwriter, and received Academy Award® nominations in the Best Adapted Screenplay and Best Original Song categories for his work on Ang Lee’s Crouching Tiger Hidden Dragon. The blockbuster film, which Schamus co-wrote and executive-produced, won 4 Academy Awards®.

Schamus has had a long collaboration as writer and producer with Ang Lee on eleven feature films including Focus’ Brokeback Mountain, which won 3 Academy Awards®, 4 Golden Globes, 4 BAFTAs, and the Producers Guild of America’s top prize, the [Darryl F. Zanuck] Producer of the Year Award; Taking Woodstock; Lust, Caution; The Hulk; Ride with the Devil; The Ice Storm; The Wedding Banquet; Eat Drink Man Woman; and Pushing Hands. Schamus executive-produced several Good Machine features that won the Grand Jury Prize at the Sundance Film Festival, including Edward Burns’ The Brothers McMullen, Tom Noonan’s What Happened Was…, and Todd Haynes’ Poison. Schamus was honored with the NBC Screenwriter Tribute at the 2002 Nantucket Film Festival as well as with the Writers Guild of America, East’s 2003 Richard B. Jablow Award for devoted service to the Guild.

It’s Kind of a Funny Story; and Sofia Coppola’s Somewhere, which won the Golden Lion Award for Best Picture at the 2010 Venice International Film Festival.