Additionally, John Rabe, which has been a box office disappointment in Germany, won Lolas for best production design (Tu Ju Hua) and best costume design (Lisy Christl). I believe it’s safe to say that Gallenberger’s film will be Germany’s submission for the 2010 best foreign-language film Academy Award. And that it’ll land an Oscar nomination.

The best director Lola went to Andreas Dresen for the popular Cloud 9, in which veteran actress Ursula Werner plays a sixty-something married woman who rediscovers love and sex outside of home.

The documentary Lola was given to Niko von Glasow’s NoBody’s Perfect, featuring about a dozen people born disabled (including the director) due to side effects from the drug Thalidomide, a medication given to pregnant women in the mid-20th century. The subjects then agree to pose naked for an art calendar.

Uli Edel’s box office hit and Oscar-nominated drama The Baader Meinhof Complex, about the terrorist group of the 1970s, failed to win a single award.

Silver Lola: A Year Ago in Winter

However, the small-scale docudrama The Way We Are (above, bottom image), set in the working-class town of Tin Shui Wai near the border with China, took home most of the top awards, including best director (Ann Hui), actress (Paw Hee-ching), supporting actress (Chan Lai Wun) and screenplay (Lou Shiu Wa).

The Best Actor winner was Nick Cheung, who plays a kidnapper in the action thriller The Beast Stalker, while Liu Kai Chi received the best supporting actor award for his work in the same film. 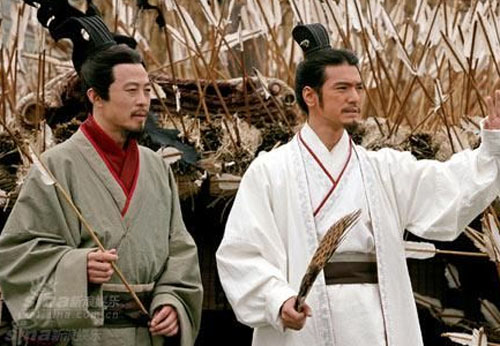 The best Asian film was Feng Xiaogang’s socially conscious war drama Assembly, from China, in which a veteran soldier tries to gain social and political recognition for the efforts of his Chinese Civil War comrades.

Best Asian Film
If You Are The One (China)
Cape No. 7 (Taiwan)
Suspect X (Japan)
Forever Enthralled (China)
* Assembly (China)

Il Divo led the field with 16 nominations, followed by Gomorrah with 11. Both films, which are in the running in the best picture category, have already won several international awards: Il Divo received the Special Jury Award at the 2008 Cannes Film Festival and a European Film Award for best actor Toni Servillo (also for Gomorrah); Gomorrah won Cannes’ Grand Prix and five European Film Awards, including best film and Servillo’s shared best actor prize. Gomorrah was also Italy’s submission for the 2009 Best Foreign Language Film Academy Award, but was surprisingly bypassed at nomination time.

Others vying for the David di Donatello for best film are Fausto Brizzi’s romance Ex, starring Alessandro Gassman; Paolo Virzi’s comedy Tutta la Vita Davanti / Her Whole Life Ahead, about a recent university graduate trying to get work in Italy’s increasingly ruthless job market; and Giulio Manfredonia’s comedy about mental institutions, Si può fare / You Can Do It.

Among the acting nominees in the lead categories are Servillo for Il Divo (but not for Gomorrah); two-time David di Donatello winner Silvio Orlando for Il Papa di Giovanna, for which he received the best actor prize at the 2008 Venice Film Festival; and Valeria Golino as a night teacher with a secret in Giulia non esce la sera (above, with Valerio Mastandrea, nominated for Non pensarci).

Among the nominees for best European Union film are Slumdog Millionaire and Waltz with Bashir, while Milk and WALL-E are among those in the running for the best foreign film David.

The David di Donatello awards ceremony will take place on May 8.

The deadline for the Academy of Motion Picture Arts and Sciences’ 24th annual Don and Gee Nicholl Fellowships in Screenwriting competition is May 1, 2009. Entries must be postmarked by May 1 or submitted online by 11:59 p.m. Pacific Time on May 1.

As per the Academy’s press release, “the program is open to screenwriters who have not earned more than $5,000 writing fictional work for film or television. Entry scripts must be feature length and the original work of a sole author or of exactly two collaborative authors. The scripts must have been written originally in English. Adaptations and translated scripts are not eligible. Up to five $30,000 fellowships are awarded each year.”

Several past Nicholl fellows have gone on to successful screenwriting careers, including Doug Atchison (Akeelah and the Bee), Ehren Kruger (Reindeer Games, Scream 3), and Andrew Marlowe (Air Force One).

Returning as Nicholl Committee Chair is 1992 Nicholl fellow Susannah Grant, who wrote the The Soloist, opening nationwide on Friday. Grant also wrote and directed Catch and Release (2007), shared writing credit on Charlotte’s Web (2006), adapted In Her Shoes (2005), and in 2000 received an Academy Award nomination for Erin Brockovich. Grant’s writing credits also include 28 Days, Ever After and Pocahontas.
Since the program’s inception in 1985, 108 fellowships have been awarded.

Application information is available now on the Academy’s Web site at www.oscars.org/nicholl.

The key deadlines for the 2010 Screen Actors Guild Awards were announced today by SAG Awards Committee Chair JoBeth Williams (best known for her role as the distraught mother in Poltergeist). This will be the 16th edition of the annual event honoring performances in motion pictures and primetime television.

Submissions for the 2010 Screen Actors Guild Awards will open Monday, July 13, 2009, at www.sagawards.org/submissions. The nominations will be announced Thursday, Dec. 17, 2009. On Saturday, Jan. 23, 2010, in the United States, TNT and TBS will simulcast the presentation of the Actor statuettes from the Shrine Exposition Center in Los Angeles at 8 p.m. ET/PT (which unfortunately means tape delay for those on the West Coast), 7 p.m. Central and 6 p.m. MT.

As per SAGs press release, “Actor® nominees are selected by separate film and television nominating committees, each consisting of 2,100 SAG members from around the country, randomly selected anew each year. All active members of SAG will receive ballots to determine who will receive Actors® for the outstanding performances of 2009.”

Among the 2009 SAG Award winners were best actor Sean Penn for Milk, best actress Meryl Streep for Doubt, best supporting actress Kate Winslet for The Reader, best supporting actor Heath Ledger for The Dark Knight, and the cast of Slumdog Millionaire for the best ensemble.