Calista Flockhart and husband Harrison Ford are seen above as they arrive at the 2012 Golden Globes ceremony held at the Beverly Hilton in Beverly Hills on Sunday, Jan. 15. Ford was the presenter of the Best Picture – Drama Golden Globe.

For Ally McBeal, Flockhart was nominated for five consecutive (1998–2002) Golden Globes in the Best Actress in a TV Series – Comedy or Musical category, coming out on top the first time around.

She has also been featured in nearly 15 movies, among them, Mike Nichols’ The Birdcage (1996), with Robin Williams and Nathan Lane; Michael Hoffman’s A Midsummer Night’s Dream (1999), with Kevin Kline and Michelle Pfeiffer;and Jaume Balagueró’s Fragile / Frágiles (2005), her last film to date, with Richard Roxburgh and Elena Anaya.

Harrison Ford has been nominated for four Golden Globes (Witness, The Mosquito Coast, The Fugitive, and Sabrina). In 2002, he was awarded the Cecil B. DeMille Award, which this year went to Morgan Freeman.

More recently, Ford hasn’t been all that lucky at the North American box office, with flops such as Crossing Over (2009), Extraordinary Measures (2010), the romantic comedy-drama Morning Glory (2010), and Cowboys & Aliens (2011).

Somewhat curiously, Calista Flockhart and Harrison Ford have never made a movie (or TV show) together.

Actress Kate Winslet is seen above posing backstage at the 2012 Golden Globe Awards after having won in the category of Best Actress in a Television Movie or Miniseries for her performance in Todd Haynes’ HBO drama Mildred Pierce.

At the 2009 Academy Awards ceremony, Kate Winslet took home the Best Actress Oscar for her work as an illiterate woman with a Nazi past in Stephen Daldry’s The Reader. She had been previously nominated five times: 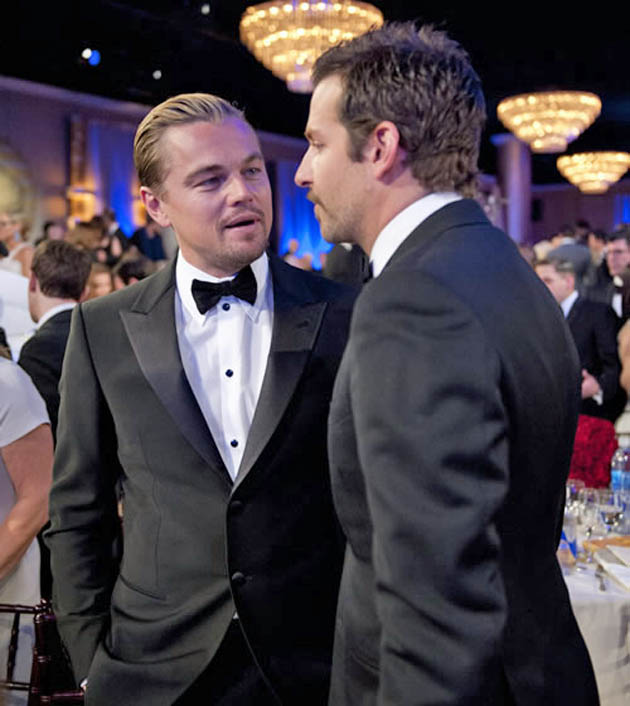 Leonardo DiCaprio and Bradley Cooper are seen above chatting away at the 69th Annual Golden Globes, held on Sunday, Jan. 15, ’12, at the Beverly Hilton in Beverly Hills. DiCaprio was a nominee in the Best Actor in a Motion Picture Drama category for his performance as the FBI’s dangerously powerful top dog J. Edgar Hoover in Clint Eastwood’s J. Edgar, also featuring Armie Hammer and Judi Dench.

Including J. Edgar, Leonardo DiCaprio, 36, has been nominated for eight Golden Globes. At the 2005 ceremony, he won in the Best Actor in a Motion Picture Drama category for his portrayal of bizarre billionaire Howard Hughes in Martin Scorsese’s The Aviator, also featuring Cate Blanchett as Katharine Hepburn and Kate Beckinsale as Ava Gardner.

DiCaprio’s other Golden Globe nominations – all but the first one in the Best Actor in a Motion Picture Drama category – were for the following:

As can be seen in the list above, DiCaprio competed against himself in 2006 (actually, at the 2007 ceremony). The winner that year was Forest Whitaker for Kevin Macdonald’s The Last King of Scotland. 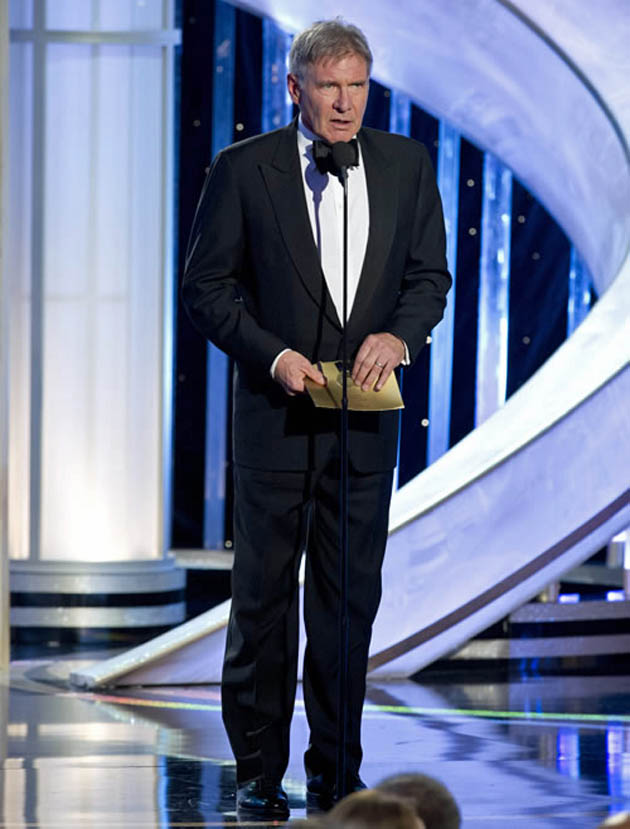 Harrison Ford has been nominated for four Golden Globes – the last time, more than 15 years ago:

Apart from Indiana Jones and the Kingdom of the Crystal Skull, in recent years Ford hasn’t been performing very well at the North American box office, having starred in a string flops, among them: 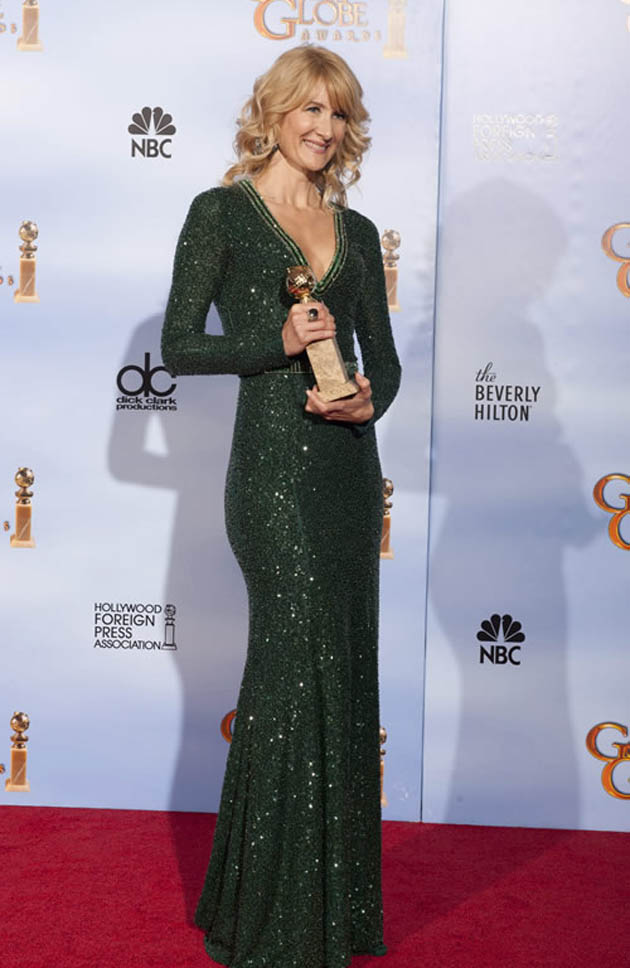 Laura Dern accepts the Golden Globe Award for Best Actress in a Television Series – Comedy or Musical for her performance in Enlightened.

Dern’s competition in her category consisted of:

Among Laura Dern’s film credits are:

Both Dern and Ladd were nominated for Academy Awards for Martha Coolidge’s Rambling Rose (1991); the daughter as Best Actress, the mother as Best Supporting Actress. They lost to, respectively, Jodie Foster for Jonathan Demme’s The Silence of the Lambs and Mercedes Ruehl for Terry Gilliam’s The Fisher King. 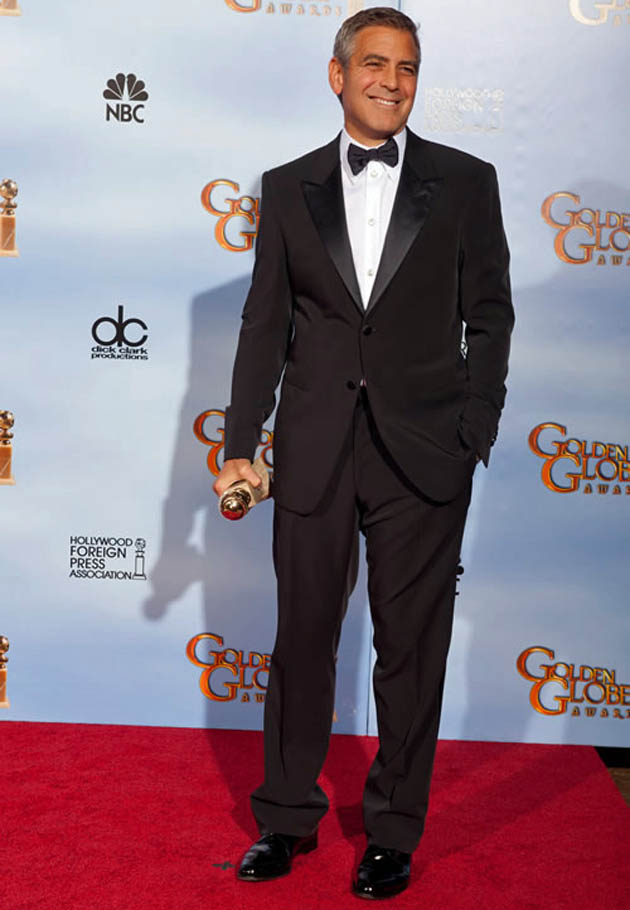 In the above photo, Clooney poses backstage in the press room with his Golden Globe statuette at the 2012 ceremony held at the Beverly Hilton in Beverly Hills on Sunday, Jan. 15.

‘The Ides of March’ shut out

George Clooney has been nominated for a total of 13 Golden Globes in various categories, in both the motion picture and television arenas. Prior to The Descendants, Clooney’s only victory was as a Best Supporting Actor for Stephen Gaghan’s political thriller Syriana, featuring Matt Damon, Chris Cooper, Amanda Peet, and this year’s Best Supporting Actor Golden Globe winner, Christopher Plummer. (Plummer took home the Golden Globe for playing Ewan McGregor’s gay father in Mike Mills’ Beginners).

At this year’s ceremony, Clooney was also in the running in the Best Director and Best Screenplay categories for The Ides of March, a political drama in which he also starred opposite double nominee Ryan Gosling. (Gosling was in contention for The Ides of March and, in the Best Actor – Comedy or Musical category, for Glenn Ficarra and John Requa’s Crazy, Stupid, Love.)*

Additionally, The Ides of March was a Best Picture – Drama nominee. The film, however, ended up not winning a single award. Clooney lost the screenwriting Golden Globe to Woody Allen for Midnight in Paris. Martin Scorsese was voted Best Director for Hugo. And of course, Clooney himself beat The Ides of March star Ryan Gosling in the Best Actor – Drama category.

Besides Gosling, George Clooney’s competition in the Best Actor – Drama category consisted of:

George Clooney was also a presenter at the Golden Globes ceremony. His fellow presenters included:

* A previous version of this post had erroneously stated that Ryan Gosling had been shortlisted in the Best Actor – Drama category for his work in Nicolas Winding Refn’s thriller Drive. 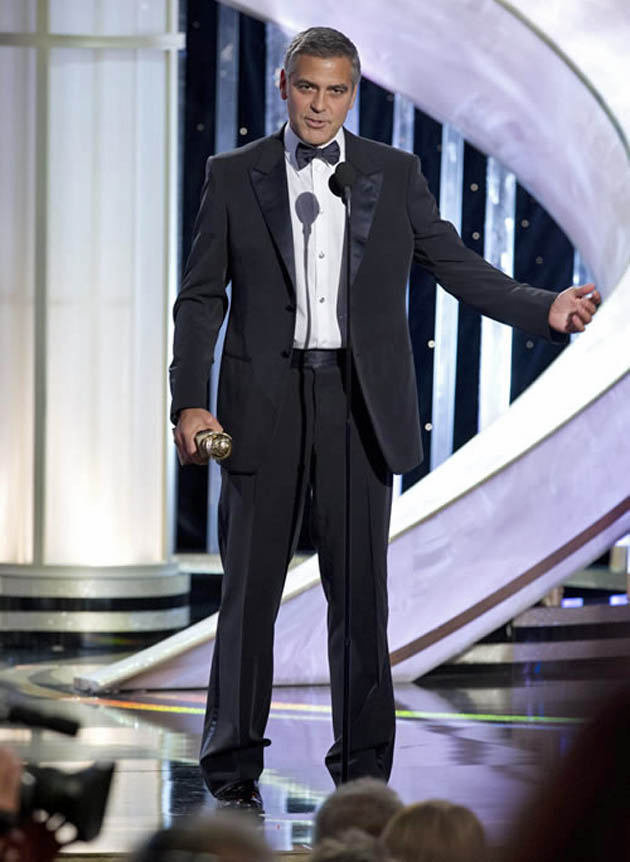 George Clooney is seen above while accepting the Golden Globe for Best Actor in a Motion Picture Drama for his star turn in Alexander Payne’s The Descendants – which, as mentioned elsewhere in this post, also won a Golden Globe statuette in the Best Motion Picture – Drama category.

Clooney has been nominated for a total of 13 Golden Globes, in various categories, in both the motion picture and television subdivisions. In the 1990s, he received three nods for the television series ER.

As a motion picture actor, Clooney had been previously nominated for:

He won as Best Supporting Actor for Syriana, which also earned him an Academy Award.

Clooney also received nods for directing and co-writing Good Night, and Good Luck. (2005), starring David Strathairn, and for directing, co-writing, and producing this year’s The Ides of March, in which he also starred opposite Best Actor in a Motion Picture -Drama nominee Ryan Gosling. 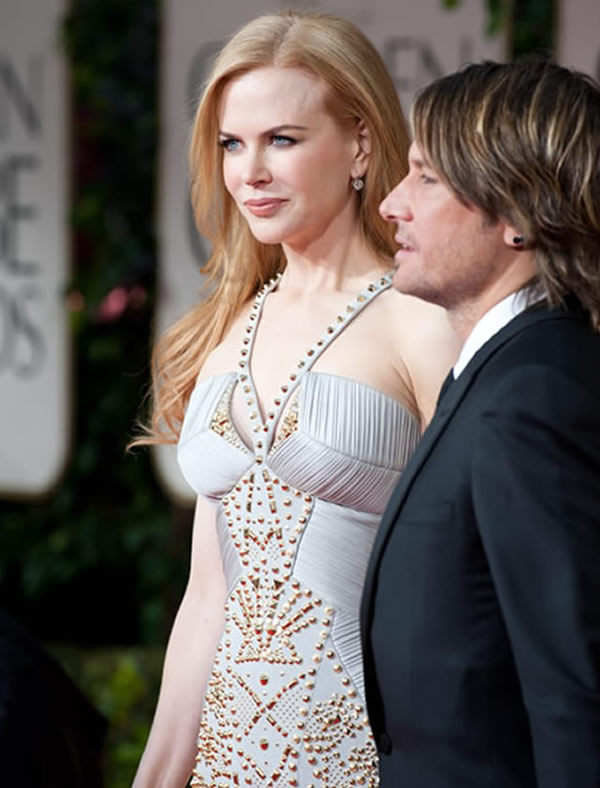 Nicole Kidman and Keith Urban attend the 69th Annual Golden Globes Awards at the Beverly Hilton in Beverly Hills, CA on Sunday, Jan. 15. Kidman was a presenter at the 2012 Golden Globes.

Singer Keith Urban hasn’t been featured in any movies, though Urban’s songs can be heard in a handful of films, such as Kill the Man and How to Lose a Guy in 10 Days. 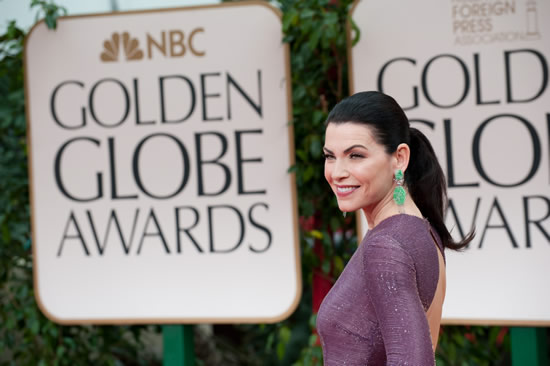 Julianna Margulies, nominated for Best Performance by an Actress in a Television Series – Drama for her role in CBS’ The Good Wife, arrives at the 2012 Golden Globes Awards ceremony, held at the Beverly Hilton in Beverly Hills on Sunday, January 15. Julianna Margulies’ competition consisted of: eventual winner Claire Danes for Homeland; Mireille Enos for The Killing for Madeleine Stowe, Revenge; and Callie Thorne for Necessary Roughness. Dustin Hoffman presented the award.

Hey Jim Carrey should not be there in the list .. and he can act . He proved it in Eternal Sunshine .. The Truman Show.. and recently in Yes Man