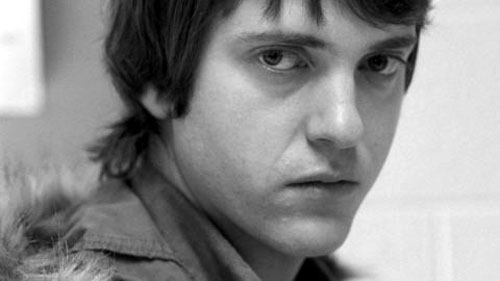 Canada Quebec differences: Polytechnique (above, with Maxim Gaudette) vs. Xavier Dolan’s I Killed My Mother.

According to Peter Howell in the Toronto Star, the controversial production “was kept under tight security to avoid protests or other disruptions.” Although Polytechnique grossed “a respectable” $1.8 million in Quebec, it earned a mere $100,000 elsewhere in Canada.

Karine Vanasse cried while accepting her award, dedicating it to the memory of Lépine’s victims. According to filmmaker Villeneuve, Vanasse and producer Don Carmody were the ones who pushed him into making the film.

Among the other Genie winners were Fifty Dead Men Walking, about the Irish Troubles, which was given Genies for Best Adapted Screenplay (for writer/director Kari Skogland) and Best Production Design (Eve Stewart).

Joshua Jackson was chosen as the Best Actor for Michael McGowan’s One Week, a drama (definitely not a comedy as previously posted) about a man’s cross-country motorcycle ride while in search of meaning for his life. Jackson’s remark upon accepting his trophy was: “I can’t believe I won something!”

At the other extreme, Xavier Dolan probably can’t believe he won nothing. Or almost.

As previously reported, Dolan’s acclaimed J’ai tué ma mère / I Killed My Mother – winner of three of Quebec’s Jutra Awards two weeks ago, including Best Picture (Polytechnique had also been in the running) – was totally shut out of the Genies’ competitive categories.

At the Genies, writer-director-actor Dolan had to content himself with a special Claude Jutra Award for best first feature. Dolan was not present at the ceremony. Kevin Tierney, vice-chairman of cinema for the Academy of Canadian Cinema & Television, accepted the award on Dolan’s behalf.

“Anne Dorval [as the mother “killed” by gay son Dolan] gives one of the best performances I’ve ever seen in Canadian history.

“I think – to be perfectly frank – that [Dolan] was very ambiguous because this award… The fact that he only got this award was sort of like – my reading was – like being sent to the kiddie table. I mean, seriously… There’s something quite preposterous about it.”

At the ceremony, Best Supporting Actress Martha Burns Genie winner (for playing a nun in Love & Savagery) asked, “J’ai tué ma mère – why isn’t that in every category? … It’s too bad we don’t have a more fun, sexier way of showing the world that our films are getting better and more original and bright. … Let’s stop boring each other.”

According to the Toronto Globe and Mail, Canadian films accounted for only $26 million of the $1 billion or so generated at the country’s box office. (Quebec’s films tend to do much better regionally, though not countrywide.)

The Globe and Mail article also provides an interesting insight into the workings of the Academy of Canadian Cinema & Television. In fact, Canadian Academy film-selection set-up reminds me of the Hollywood Academy and its byzantine practices regarding foreign-language films.

With the exception of The Master Key, all of the aforementioned titles are in the running for Best Film.

“I’m an emotional guy,” Charles Officer explained after whoops of joy were followed by profuse tears when he learned that Nurse.Fighter.Boy had received ten nods. “The film itself was an emotional journey for the characters. If you’re a part of that film, it has to be coming from somewhere, which is myself.”

Heavy drama dominated the Genies: The black-and-white Polytechnique, made in both French and English, chronicles the events that led to the massacre of 14 female students in Montreal in 1989; Before Tomorrow features an ill-fated Inuit hunting trip in the mid-19th century; Nurse.Fighter.Boy is a gritty urban drama about a former boxer who becomes attached to a nurse and her son; and the Irish Troubles are the focus of Fifty Dead Men Walking.

Jim Donovan’s 3 Saisons, featuring several intertwined stories a la Babel, is the other Best Film nominee. It’s also the only one in that group without a matching Best Director nod. Instead, Bruce McDonald was shortlisted for the horror thriller Pontypool.

Atom Egoyan’s Adoration received only two nominations, for screenwriting and for best supporting actor Scott Speedman. De Pére en Flic, winner of the Golden Reel Award given to the most successful Canadian film of the year, is up for three Genies: best original screenplay, and best supporting actors Patrick Drolet and Rémy Girard.

“This year’s nominations reflect a national cinema that is courageous in its storytelling,” said Sara Morton, CEO of the Academy of Canadian Cinema & Television, referring to this year’s nominees for the 2010 Genie Awards, the Canadian Oscars. “They are films created from the wealth of cultures, communities, and historical moments that make up the Canadian identity. As the Genie Awards celebrate its 30th anniversary, these nominees will remind us of why it is as important as ever to celebrate and cherish the best of Canadian film.”

One who probably doesn’t feel like either celebrating or cherishing is 20-year-old filmmaker Xavier Dolan, whose I Killed My Mother, Canada’s submission for the Best Foreign Language Film Oscar, was snubbed by the Academy of Canadian Cinema. And not just snubbed for Best Film and Best Director – this story of a gay teen and his warped relationship with his mother, despite three wins at Cannes, successful festival screenings, and numerous good reviews especially for its female star, Anne Dorval, received a total of zero nominations. (The Hollywood Academy also failed to include it among the year’s foreign-language nominees.)

As a sort of consolation prize, Xavier Dolan will be getting the Genies’ non-competitive Claude Jutra Award given to an outstanding first-time filmmaker. Additionally, Dolan’s film is up for five Prix Jutra, Quebec’s own Oscars.

When asked about the I Killed My Mother snub at the Genies, Sara Morton replied: “It definitely was considered in all the categories. There is a significant difference between a film that does well on the festival circuit and one which is in a competition against other films. I don’t think you can generalize from festival success to Genie success.”

Unlike the Hollywood Academy, which allows members to vote on the nominees of their particular branches, the Genies’ nominating jury is composed of film professionals, movie critics and journalists. 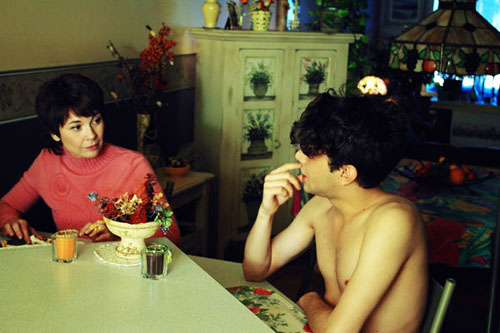 Xavier Dolan and Anne Dorval in I Killed My Mother.

Xavier Dolan’s I Killed My Mother / J’ai tué ma mère may have fared quite poorly at Canada’s Genie Awards – it was totally shut out of the competitive categories – and at the Oscars, having lost out on a Best Foreign Language Film nomination. At the 2010 Prix Jutra ceremony, however, Dolan’s comedy-drama about a gay son and his mother received top honors, taking home the Prix Jutra for best film of 2009 on Wednesday, March 31.

Additionally, I Killed My Mother earned Dolan the Best Screenplay Award and Anne Dorval the Best Actress Jutra. The film was also voted the most popular local production outside Quebec’s borders.

Denis Villeneuve was chosen the Best Director for Polytechnique, the story of the 1989 Montreal massacre of several female engineering students. As the mass murderer, Maxim Gaudette won the Best Supporting Actor Jutra. Polytechnique, in fact, received the highest number of awards: five in all.

Sébastien Ricard was voted Best Actor for Dédé à travers les brumes / Dédé Through the Shadows, a biopic of Quebecois composer-singer André Fortin, who died – officially a suicide – at the age of 37 in 2000.

The Best Supporting Actress was Sandrine Bisson for 1981.

Pete Docter’s Up, a Disney/Pixar release that is the favorite for this year’s Best Animated Feature Oscar, won three awards, including outstanding animation.

Other feature film winners were District 9, for outstanding compositing, and Sherlock Holmes, for supporting visual effects.

I Killed My Mother (Regent Releasing)