Steve Montgomery 11 years ago
Of Gods and Men, directed by Xavier Beauvois.

Apichatpong Weerasethakul’s Uncle Boonmee Who Can Recall His Past Lives, a dreamlike Thai drama about a man dying of kidney failure that left many puzzling over its meaning, won the Palme d’Or at the 2010 Cannes Film Festival.

“I would like to thank my mother and my father, who 30 years ago, they took me to a little cinema in our little town, and I was so young and didn’t know what it was on the screen,” Weerasethakul said upon accepting his award. “I didn’t know the concept of cinema. With this award, I think I know a little more what cinema is, but it still remains a mystery. I think this mystery keeps us coming back here and to share our world.”

Weerasethakul also thanked “all the spirits and ghosts in Thailand,” who made it “possible for me to be here,” and said he liked Official Competition jury president Tim Burton’s hairdo.

Weerasethakul had previously won the Jury Prize (third place) in 2004 for Tropical Malady, and the top prize at the Un Certain Regard sidebar for his Sud sanaeha in 2002.

The Grand Prize (despite its “grand” name, it’s a runner-up award) went to Xavier Beauvois’ Of Gods and Men, starring Lambert Wilson and Michael Lonsdale. The film tells the story of seven French monks beheaded during Algeria’s civil war in 1996, focusing on their inner conflicts instead of the violence around them. Yesterday, Of Gods and Men won the prize from the Ecumenical Jury.

Mahamat-Saleh Haroun’s tragic Un homme qui crie / A Screaming Man, about a father who loses his job as a swimming pool attendant to his son amid the onset of Chad’s civil war, won the Jury Prize.

This year, the Cannes festival has been criticized for the disappointing quality of many of the films in the official competition.

Juliette Binoche and Javier Bardem, both of whom have already received Academy Awards in the past, took home the acting awards for their performances in, respectively, Abbas Kiarostami’s Certified Copy and Alejandro González-Inarritu’s Biutiful. Neither victory came as a surprise. (Binoche was even the festival’s poster girl this year.)

More surprising was that Bardem shared the Best Actor trophy with Elio Germano for his performance as a young widower in Daniele Luchetti’s La nostra vita / Our Life.

In her speech, Binoche, who in Certified Copy plays a woman in a difficult romantic relationship while spending time in Italy, thanked her director – “What a joy, what a joy, what a joy to work with you, Abbas” – and pleaded for the release of Iranian filmmaker Jafar Panahi, who has been incarcerated because he’s considered a threat to Iran’s Islamic regime.

“I hope he will be here himself next year,” Binoche remarked. “It’s hard to be an artist and an intellectual, and the country needs you.”

Bardem, who plays a dying father involved in criminal activities in Biutiful, later explained at a news conference that “I’m very happy that we are sharing the best actor, so less people lose. It’s very hard for people to lose in the sense of, in a festival, you can’t really say what’s best. I mean, it’s nine people’s opinion, and I’ve been on the jury here, and I can assure you that it’s very, very difficult to put nine people in agreement to like anything.”

During his acceptance speech, Bardem thanked his off-screen companion Penélope Cruz, who, according to the New York Times, “promptly began to cry.”

Mathieu Amalric, best known for his work as an actor in films such as The Diving Bell and the Butterfly and A Christmas Tale, won the Cannes Film Festival’s Best Director award for Tournée / On Tour – that in addition to its surprising International Critics’ Prize victory. On Tour received its share of negative reviews when it opened near the beginning of the festival.

In the film, Amalric plays the manager of a troupe of American burlesque strippers touring France.

The screenplay award went to Lee Chang-dong for the South Korean drama Poetry, in which a grandmother (Yun Junghee) facing the onset of Alzheimer’s begins to see life anew after she enrolls in a poetry class.

The Camera d’Or award for a first-time filmmaker went to Michael Rowe’s Año bisiesto / Leap Year. Co-written by Rowe and Lucia Carreras, the Mexico City-set romantic/sex drama stars Monica del Carmen as a lonely woman who has set up a date with fate and Gustavo Sánchez Parra as the man who is willing to help her out.

Finnish filmmaker Juho Kuosmanen’s Taulukauppiaat / The Painting Sellers (above) topped the Cinéfondation Awards at the 2010 edition of the Cannes Film Festival. The Painting Sellers follows a trio of salespeople on the road and out of luck even though it’s Christmastime. Worse yet, they have to come to terms with their budding friendship.

Runners-up were Vincent Cardona’s Coucou-les-nuages / Anywhere Out of the World, followed by Vatche Boulghourjian’s The Fifth Column tied with Dane Komljem’s I Already Am Everything I Want to Have.

Cinéfondation was created in 1998 “to inspire and support the next generation of international filmmakers.”

Surprisingly, Mathieu Amalric’s Tournée / On Tour, the tale of a French manager and his American burlesque performers touring France and one of the least liked films at this year’s Official Competition for the Palme d’Or, bagged the International Federation of Film Critics (FIPRESCI) Prize for best film in the official line-up.

According to a statement made by FIPRESCI jury president Alin Tasciyan, this year the awards were handed out to “the future, new auteurs and masters.” That may explain Amalric’s win, as he’s best known for his work in front of the cameras, e.g., The Diving Bell and the Butterfly, Kings & Queen.

According to the International Critics, the best debut in the Directors’ Fortnight or Critics’ Week was that of Olivier Laxe’s Todos vos sodes capitans. 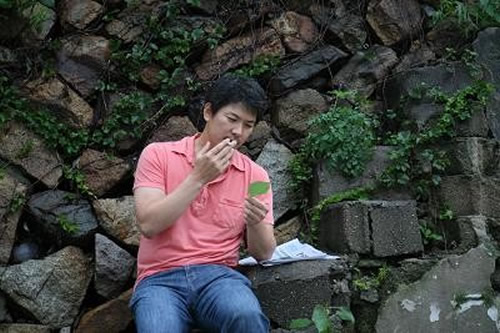 Hong Sangsoo’s HaHaHa, winner of the top prize at the Cannes Film Festival’s Un Certain Regard sidebar, revolves around a conversation between a Korean movie director and his good friend, a movie critic, who had both spent a summer night among the same group people – without knowing they were there at the same time.

The Un Certain Regard Jury Prize went to the Peruvian/Spanish/Venezuelan co-production Octubre / October, written and directed by Diego Vega and Daniel Vega. Octubre tells the story of a withdrawn pawnbroker whose neighbor tries to get him to open up emotionally. A newborn baby – possibly the outcome of a liaison between the pawnbroker and a local prostitute – helps the man’s inner awakening.

Eva Bianco, Victoria Raposo and Adela Sanchez shared the Best Actress award for their work in Santiago Loza and Ivan Fund’s Argentinean drama Los Labios / The Lips, about the complex relationships among three women who travel to a distant place to do welfare work.

No Best Actor winner was announced.

The Ecumenical Jury at the 2010 edition of the Cannes Film Festival – as to be expected – awarded its top prize to Xavier Beauvois’ Des hommes et des Dieux / Of Gods and Men (above).

Starring Lambert Wilson and Michael Lonsdale, Of Gods and Men recounts the events that led to the horrific massacre of a group of Trappist monks in civil war-torn Algeria in the mid-’90s.

Ecumenical Special Mentions went to Mike Leigh’s Another Year, starring Jim BroadBent and Ruth Sheen as an aging couple, and Lee Chang-dong’s Poetry, in which an older woman starts to see life differently after she begins taking a poetry class.

A psychological/supernatural drama, Lovelorn tells the story of a young man who, in his dream world, attempts to prevent death from taking away his comatose sister.

Other winners were Australian actress Natalie Eleftheriadis for her performance in the prostitution drama Birthday, Kenyan filmmaker Wanuri Kahiu for her post-apocalypse short Pumzi, and Cassie Jaye for her documentary Daddy I Do, about the pro-abstinence movement in United States. (Here’s wondering if the documentary features disgraced pro-abstinence Republican congressman Mark Souder, a married man who had an affair with one of his aides.)

The films in the running for Palme d’Or and other awards at the 2010 Cannes Film Festival were announced Thursday morning at a press conference at the Grand Hotel in Paris.

As expected, Alejandro González Iñárritu is back with Biutiful, starring Javier Bardem; and so is veteran Jean-Luc Godard with his documentary Socialisme – but in the Un Certain Regard sidebar.

Mike Leigh, whose Vera Drake was turned down in 2004 (and went on to win the Golden Lion in Venice), has Another Year – which also stars Vera Drake‘s Imelda Staunton – in the line-up, while Mathieu Amalric, the star of Julian Schnabel’s The Diving Bell and the Butterfly, has gone behind the cameras for Tournée. (Curiously, Schnabel’s Miral was not shortlisted.)

Among other film veterans represented at the festival are Abbas Kiarostami, Bertrand Tavernier, Nikita Mikhalkov, and Rachid Bouchareb.

Crowe is no Errol Flynn and I’m not expecting another The Adventures of Robin Hood, but let’s hope this one is at least better than either Kevin Costner’s Robin Hood: Prince of Thieves or Scott’s previous medieval foray, Kingdom of Heaven.

Reuters, Agence France-Presse, Getty, and the Associated Press threatened to boycott today’s announcement because of restrictions imposed on their coverage of this year’s festival. So, Cannes 2010 hasn’t even begun and we already have controversy, even if not exactly of the film kind.

But not to worry. Here’s some film controversy for you: Terrence Malick’s much-anticipated The Tree of Life is not one of the films in competition. Apparently, it wasn’t finished in time for the festival. That will leave a whole lot of people mighty disappointed.

Or perhaps not. A handful more entries for the Palme d’Or are supposed to be announced in the coming days.

And since Jean-Luc Godard is in the running, something will be said and done to keep journalists and bloggers busy throughout the festival.

Burnt by the Sun 2, Nikita Mikhalkov

You My Joy, Sergei Loznitsa

You Will Meet a Tall Dark Stranger, Woody Allen

More from Cannes 2010. The Un Certain Regard sidebar promises to be about as interesting as – if not more interesting than – the main competition. What with Jean-Luc Godard’s documentary Socialisme and Cristi Puiu’s Aurora. Not to mention 101-year-old Manoel de Oliveira (Angelica) competing with 21-year-old Xavier Dolan (Heartbeats).

Skyfall: Most Successful James Bond Movie Ever Made?

That info is available in the film’s synopsis right here:

On one of the most visited sites on the planet.

But I’ll fidget with the description a bit, just in case.

Do you think you could change your comments about the story of ano bisiesto/ Leap Year? Other reviews have alluded to what the main character has planned for Feb 29, but have restisted stating what it is. You give away the realisation/twist that drives the story. For me, the surprise has now gone and i know the end before i see the film.