Screenwriter-director Ruben Östlund’s The Square was the Palme d’Or winner at the 2017 Cannes Film Festival, which wrapped up on May 28.

Clocking in at about 2 hours and 20 minutes, Östlund’s unusual comedy-drama revolving around the chaotic p.r. campaign to promote the opening of the titular installation – a symbolic square of light – at a contemporary art museum in Stockholm has been generally well-received by critics.

In the opinion of The Guardian‘s Peter Bradshaw, for instance, The Square “really brings some gobsmackingly weird and outrageous spectacle, with moments of pure showstopping freakiness” reminiscent of disparate talents like Roy Andersson, Lars von Trier, and Luis Buñuel.

Cannes 2017 official competition jury president Pedro Almodóvar, for his part, appreciated how The Square portrays “the dictatorship of being politically correct,” adding that it “is terrible and awful and more horrifying than any other dictatorship.”

Ruben Östlund’s depiction of the terrible and awful and horrifying p.c. dictatorship was the first (at least nominally) Swedish entry to win the Palme d’Or since Danish filmmaker Bille August’s Swedish-language The Best Intentions, an international co-production released a quarter of a century ago.

In case you’re wondering, no Ingmar Bergman or Jan Troell film has ever taken home the Palme d’Or, though Bergman won Best Director for Brink of Life in 1958.

In the cast of Östlund’s Swedish- and English-language comedy-drama: Danish actor Claes Bang, English actors Elisabeth Moss and Dominic West, and Rise of the Planet of the Apes American actor Terry Notary as a performance artist who takes his “ape act” very seriously.

‘The Square’ for the Oscars?

Three years ago, Ruben Östlund’s psychological comedy-drama Force Majeure / Turist was awarded the Un Certain Regard Jury Prize (the runner-up prize in that particular Cannes sidebar), later going on to receive Best Foreign Language Film nominations at both the Golden Globes and the Baftas.

Force Majeure, however, failed to be shortlisted for that year’s Academy Awards even though it was one of the nine semi-finalists in the Best Foreign Language Film category.

Will The Square have a stronger chance at Oscar 2018?

As a (mostly Swedish-language) Palme d’Or winner, The Square, however long and bizarre, should have an all but guaranteed slot among the nine semi-finalists for the Best Foreign Language Film Academy Award. Whether it will actually receive a nomination is a whole different matter, especially considering that:

a) Palme d’Or or no, The Square isn’t exactly an “Academy-friendly” effort – i.e., linear; emotional/sentimental; at least somewhat commercial; with a clear, preferably uplifting, message.

b) Only a couple of dozen or so Academy members choose the five final contenders, leaving less room for broad consensus choices.

Below: The Square scene with Claes Bang and Elisabeth Moss. Ruben Östlund film became the first – at least part- – Swedish Palme d’Or winner since Bille August’s The Best Intentions a quarter of a century ago.

Besides, out of the 10 (mostly or totally) non-English-language Palme d’Or winners since 2000, a mere three – Laurent Cantet’s The Class (2008) and Michael Haneke’s The White Ribbon (2009) and Amour (2012) – would eventually be shortlisted for the Best Foreign Language Film Academy Award.

Only one, Amour, took home the Oscar statuette in that category, in addition to receiving a Best Picture nod – a rare feat for a non-English-language entry. (Beginning in 2009, the expansion of the Best Picture roster to up to 10 titles undeniably gave a huge boost to Amour‘s Oscar chances.)

Something else: in the last decade or so, among those left out of the invariably surprise-filled Best Foreign Language Film Oscar shortlist were the following notable submissions:

Something else to consider: could The Square have too much English dialogue for a Best Foreign Language Film Oscar entry? (See The Band’s Visit-related to-do a few years ago.)

According to reviews, that doesn’t seem likely. But just in case … what about a Best Picture nomination?

Once again, The Square is hardly what one would call an “Academy-friendly” movie. Its chances of a Best Picture Oscar nomination are – at best – quite slim, especially as Ruben Östlund’s film would be competing against much better-known U.S.-made (or at least co-made) product.

Moreover, since the year 2000 no less than seven English-language films* have been awarded the Palme d’Or at Cannes. Only two – Roman Polanski’s The Pianist (2002) and Terrence Malick’s The Tree of Life (2011) – would be eventually shortlisted for the Best Picture Oscar.

* The other English-language Palme d’Or-winning titles were:

Now, what about a Best Director nomination for Ruben Östlund?

Well, bear in mind that since 2000 the directors of only three Palme d’Or winners have been shortlisted for a matching Academy Award:

Polanski was the only one to take home an Oscar statuette.

Magnolia Pictures, the same company that handled Force Majeure, will release The Square in the U.S.

In case France submits it to the 2018 Best Foreign Language Film Oscar, screenwriter-director Robin Campillo’s AIDS drama 120 Beats per Minute / 120 battements par minute, about the Paris Act Up chapter in the early 1990s, could quite possibly land a nomination.

The Grand Prix (Cannes’ second prize), international film critics’ FIPRESCI prize, and Queer Palm winner offers a couple of key ingredients that, despite its gay sex scenes, should please a not insignificant segment of the Academy membership: emotionalism and a clear sociopolitical message.

When discussing the film after the presentation of the Palme d’Or, Pedro Almodóvar (and, reportedly, jury member Jessica Chastain) broke into tears. Some believed, in fact, that 120 Beats per Minute was going to be the movie to beat (no pun intended) at the Cannes awards ceremony.

Yet praise for the silence = mort drama has not infrequently been diluted by objections to the filmmaker’s approach. “There are numerous effective moments that communicate the anger and frustration that then abounded,” writes Donald Clarke in The Irish Times. “But 120 Beats is a surprisingly conventional, borderline-vanilla piece of work that fails to properly flesh out its romance or explore the intricacies of its social agendas.”

In the 120 Beats per Minute cast: Nahuel Pérez Biscayart, Arnaud Valois, and Adèle Haenel. Robin Campillo co-wrote the screenplay with Philippe Mangeot. The Act Up drama opens in France on Aug. 23, which would make it eligible for submission for the 2018 Best Foreign Language Film Oscar.

Sony Music subsidiary The Orchard will be releasing 120 Beats per Minute in the U.S. Although a relative newcomer to the movie distribution scene, The Orchard has already landed one important Academy Award nomination: for Matthew Heineman’s Cartel Land (2015), shortlisted in the Best Documentary Feature category.

Aleksey Rozin and Maryana Spivak are the concerned parents while Matvey Novikov is the object of their search. Oleg Negin wrote the screenplay. 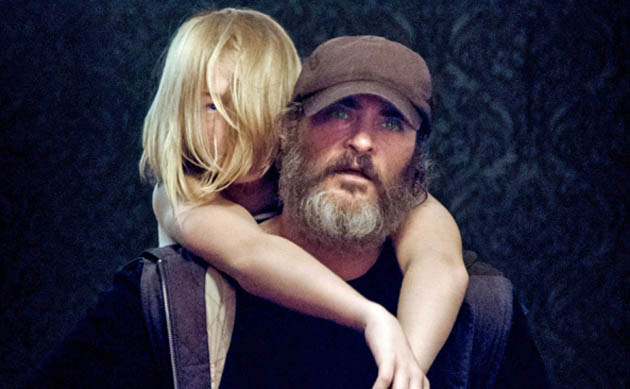 Sex trafficking at the Oscars?

Picked up by Amazon Studios (Manchester by the Sea, The Salesman) for U.S. distribution, screenwriter-director Lynne Ramsay’s sex trafficking thriller You Were Never Really Here shared Cannes’ Best Screenplay Award with Yorgos Lanthimos’ The Killing of a Sacred Deer, in addition to earning Joaquin Phoenix the Best Actor Award.

We Need to Talk About Kevin, in fact, ended up being completely bypassed by the Academy Awards. Unless You Were Never Really Here is prominently listed by U.S. critics groups during awards season, it could run into some Oscar trouble due to its – according to (generally positive) reviews – relentlessly downbeat tone (“nightmarish and humidly absorbing,” in the words of The Guardian‘s Peter Bradshaw).

As a disturbed war veteran/former cop/hitman in You Were Never Really Here – shades of Robert De Niro’s Taxi Driver character (plus a long beard) – leading man Joaquin Phoenix likely has a better Oscar 2018 chance than the film itself. Phoenix, after all, has a showy role and he has already been shortlisted for three Oscars (Best Supporting Actor for Gladiator, 2000; Best Actor for Walk the Line, 2005, and The Master, 2012).

Having said that, competition for the Best Actor Oscar 2018 could turn out to be stiff, ranging from Timothée Chalamet and Armie Hammer in Luca Guadagnino’s gay romance and Sundance hit Call Me by Your Name to Michael Fassbender in The Snowman, Matt Damon in Downsizing, and Robert Pattinson in Good Time.

Since 2000, only four Cannes Best Actor winners have gone on to receive Academy Award nominations:

Christoph Waltz and Jean Dujardin won in their respective categories.

Cannes winners Tommy Lee Jones (The Three Burials of Melquiades Estrada), Benicio Del Toro (Che)†, and Timothy Spall (Mr. Turner) are the three English-language/Hollywood names to have been bypassed during that period.

Lynne Ramsay’s screenplay is based on Jonathan Ames’ novella.

† Directed by Steven Soderbergh, Che was mostly shot in Spanish. Benicio Del Toro, however, is a Hollywood “name,” having won the Best Supporting Actor Oscar for Soderbergh’s Traffic (2010). 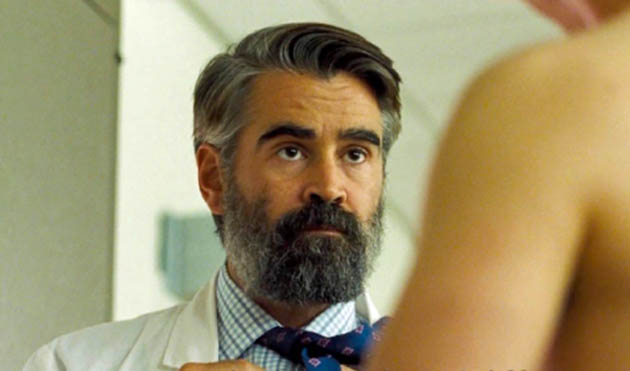 Directed by Yorgos Lanthimos and co-written by Lanthimos and frequent collaborator Efthymis Filippou (Dogtooth, Alps), the Anglo-Irish co-production The Killing of a Sacred Deer chronicles the budding – and disquieting – relationship between a middle-aged surgeon (a bearded Colin Farrell) and a teenager (24-year-old Norfolk actor Barry Keoghan).

Also directed by Lanthimos, co-written by Lanthimos and Filippou, and starring Colin Farrell, the unusual The Lobster – set in a dystopian near future in which people run the risk of being turned into wild beasts – was shortlisted for the 2016 Academy Award in the Best Original Screenplay category. The Lobster had previously won the Jury Prize at the 2015 Cannes Film Festival.

Awards season critical love should help The Killing of a Sacred Deer gain some Oscar traction – for Best Picture, Best Director, and/or Best Original Screenplay – while its mostly well-known, English-speaking leads will surely not hinder matters any in the acting categories.

A24, the U.S. distributor of both The Lobster and this year’s Best Picture Oscar winner, Barry Jenkins’ Moonlight, will release The Killing of a Sacred Deer on Nov. 3.

Image of Colin Farrell in the 2017 Cannes Film Festival Best Screenplay co-winner The Killing of a Sacred Deer: Element Pictures / Film4 Productions / A24.