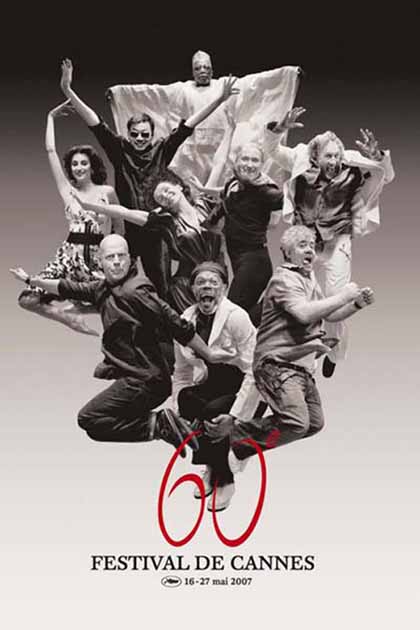 Twenty-two films will be vying for the 2007 Palme d’Or once the 60th Cannes Film Festival gets under way next Wednesday, May 16.

Among the 13 first-timers in the official competition are Fatih Akin, with Auf der Anderen Seite / The Edge of Heaven (Akin’s Gegen die Wand / Head-On won both the 2004 Golden Bear at the Berlin Film Festival and the 2004 European Film Award); David Fincher, with the crime drama Zodiac, starring Jake Gyllenhaal – the film was a major box office disappointment in the U.S.; the sexually provocative Catherine Breillat, with Une vieille maîtresse / An Old Mistress, with Asia Argento; and Vincent Paronnaud and Iranian comic artist Marjane Satrapi (making her film debut), with an animated film version of Satrapi’s graphic novel Persepolis, about her experiences growing up in Iran during that country’s Islamic Revolution.

Among the Cannes veterans are 1994 Palme d’Or winner Quentin Tarantino (for Pulp Fiction), who’ll be around with a reedited version of Death Proof, his half of the box office dud Grindhouse; 1991 Palme d’Or winner (for Barton Fink) Joel Coen, with the thriller No Country for Old Men, starring Tommy Lee Jones and Woody Harrelson; two-time Palme d’Or winner Emir Kusturica (for Otac na sluzbenom putu / When Father Was Away on Business in 1985 and for Underground in 1995), with Zavet / Promise Me This; and 1997 best director winner (for Chun gwong cha sit / Happy Together) Wong Kar-Wai, whose English-language film debut, My Blueberry Nights, starring Jude Law, will open the festival.

The jury of the official competition will be headed by British director Stephen Frears.

Another Cannes vet, 2004 Palme d’Or winner Michael Moore (for Fahrenheit 9/11), will be represented by a special screening of Sicko, Moore’s indictment of the American healthcare system.

Despite reports that Denys Arcand’s L’Âge des ténèbres / The Age of Darkness might not be ready for Cannes, the film has been officially announced as the closing night gala screening on May 27. In L’Âge des ténèbres, Marc Labrèche stars as a bored Quebec civil servant who spends a lot of his time in a fantastical dream world. Also in the cast are Diane Kruger and Rufus Wainwright.

(Considering that Arcand is the man behind that – unfair – indictment of Canada’s socialized healthcare system, Les Invasion barbares / The Barbarian Invasions, which depicts U.S. healthcare as a model of efficiency, it would be interesting to get his reaction to Sicko.)

Other Cannes events include:

A Cinema Masterclass hosted by Martin Scorsese; an Actor’s Masterclass by Sergio Castellitto, a Music Masterclass by Howard Shore, “in the presence of David Cronenberg”; and a tribute to Henry Fonda, with Jane Fonda in attendance.

The third edition of the program Tous les Cinémas du Monde (literally, “All the Cinemas of the World”) will screen films from Lebanon, India, Poland, Colombia, Slovenia, and Africa (Guinea, Angola, and Kenya).

60th anniversary tributes to Jane Birkin, with a screening of Birkin Boxes; Claude Lelouch, with Roman de Gare / Tracks; Ermanno Olmi, with Centochiodi (for which Olmi received a Nastro d’Argento nomination in the best original story category); and Volker Schlöndorff, with Ulzhan.

And finally, more than 3,000 buyers and sellers from 80 different countries are expected to attend the festival’s film market.

About 300 journalists crammed into a 200-seat room to hear director Wong Kar-Wai, actor Jude Law, and singer-turned-actress Norah Jones discuss their film, My Blueberry Nights, a romantic drama that opened the 60th edition of the Cannes Film Festival.

“Sometimes the tangible distance between two persons,” Wong explained, “can be quite small but the emotional one can be miles. My Blueberry Nights is a look at those distances, from various angles. I wanted to explore these expanses, both figuratively and literally, and the lengths it takes to overcome them.”

My Blueberry Nights tells the story of a young woman (Norah Jones) who, following the departure of her boyfriend, spends her nights at a New York diner eating blueberry pie and chatting with the owner of the establishment (Jude Law). Eventually, she decides to leave New York City, ending up on the western half of the U.S.

According to Wong Kar-Wai, this road movie “is not a road movie. What matters isn’t the trip, but the distance. She leaves New York and goes to the other side of the country, as far away as possible from the man that left her.”

Well, she certainly could’ve gone much further – ending up in Wong’s own Hong Kong, for instance, but the acclaimed director of Fa yeung nin wa / In the Mood for Love and 2046 apparently wanted to make an American story.

Wong said that the inspiration for My Blueberry Nights was “the short film that I made, a 6-minute short film, which was supposed to be part of In the Mood for Love. … And one of the reasons I wanted to make the film in the United States at that point is because I wanted to work with Norah, and this is a very good story for Norah. I thought it interesting to do it in English and shoot in New York because she plays in New York, and because of her schedule at that time. So I took it as the starting point and we developed the story, which is quite different, because the short film is basically only the first chapter of the film. … From the diner we go to Memphis, and then across the country. … It’s not a road movie, it’s not about journey; it’s about destiny.”

As per an Associated Press report, My Blueberry Nights received only polite applause at the press screening.

Also in the cast are Natalie Portman, Rachel Weisz, and David Strathairn.

Xan Brooks in The Guardian:

(After reading the paragraph below, all I could think was, Bresson, le pauvre)

“Abel Ferrara makes movies marinated in Catholic guilt, soaked in blood and frequently undulating with semi-naked women. These have sometimes been likened to the work of Martin Scorsese, although Scorsese never went so far as to have Harvey Keitel masturbate in front of a group of schoolgirls, as Ferrara had him do in Bad Lieutenant. Alternatively, several critics have found parallels with the films of the French master Robert Bresson, despite the fact that Bresson, so far as I know, never actually featured a scene in which a pole dancer French-kisses her Doberman Pinscher, as is the case in Go Go Tales. Love him or loathe him, Ferrara is a bit of a one-off.”

The Cannes screening of Ferraras Go Go Tales at Brooks The Guardian blog:

“So far as I could tell, nobody walked out of the [Joel and Ethan] Coen brothers film No Country For Old Men, which must qualify it as an unqualified hit. In stark contrast, about a third of the audience abandoned last nights screening of the new Abel Ferrara drama Go Go Tales. The exodus started at around the half-hour mark and petered out about 20 minutes before the end.”

More from Brooks The Guardian blog “Cannes is full of film-makers without borders”:

“Michael Winterbottom’s A Mighty Heart is referred to as the lone British feature in the selection, even though it is backed by an American company, stars two Hollywood actors (Angelina Jolie, Dan Futterman) and is based on a book by a Parisian of Afro-Cuban descent (Mariane Pearl). By contrast, the Joy Division biopic Control boasts a Mancunian setting and a crop of British players but barely merits a mention because the director (Anton Corbijn) is Dutch.”

“Catherine Breillat [right] has spent more than 30 years showing a knack for directing individuals wearing no costumes at all, so its doubly heartening she knows precisely what to do with lovesick characters in lavish costumes in An Old Mistress. Splendidly cast tale of a handsome young man who intends to stay away from his desire-stoking, long-term mistress after his marriage, brims with pointed dialogue, with the occasional duel or forthright sex scene interspersed to fine effect.”

At the press conference for the film, Catherine Breillat talked about the stroke she suffered in October 2004 that left half of her body paralyzed. Via Allocine:

“Simply put, that makes me laugh because I use numbers as symbols for everything, and 11 represents a body that is hemiplegic. And this happens to be my eleventh film. The courage to make this film stems from [producer] Jean-François Lepetit, for this is the most financially burdensome film Ive ever made. The most burdensome film to carry around, too, since its a costume drama [the pun here is: heavy costumes = heavy film]. But filmmaking is my life, and my life in its plenitude has been invested in this film. I don’t believe its a hemiplegic film.”

Made in Jamaica (2006) directed by Jérôme LAPERROUSAZ (France)

Mikey and Nicky (1976) directed by Elaine MAY (United States)

For the Love of God directed by Joe TUCKER (United Kingdom)

Minus directed by Pavle VUCKOVIC (Serbia-Montenegro)

Jude Law has been called the sexiest man alive

It’s a wonderful romantic drama. Jude Law and Norah Jones are great together, so cute.
The music is soft.
Really, this movie is a little treasure