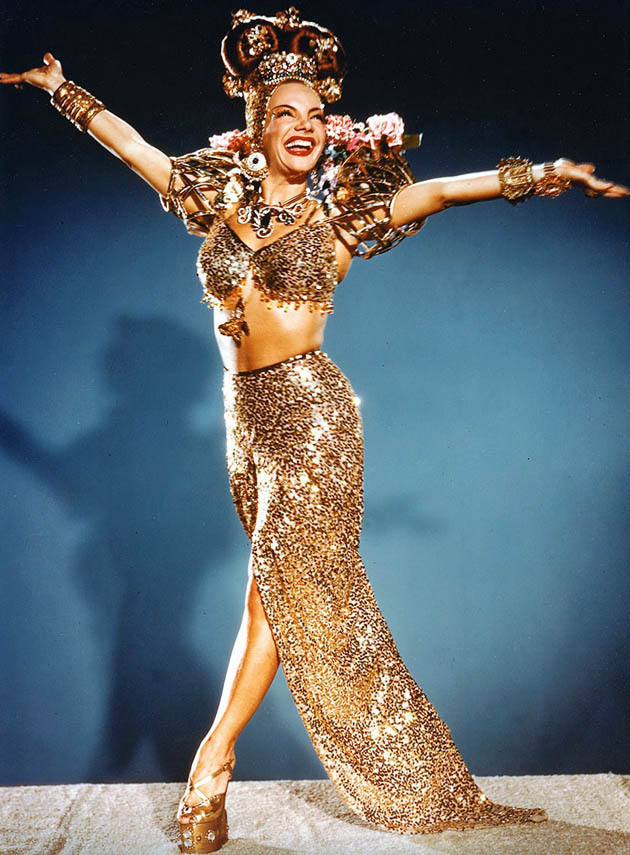 “We want to restore the image of Carmen, who has had an incredible impact on Brazil,” says Fabiano Canosa, the curator of a Carmen Miranda costume and memorabilia exhibition being held this December 2005 at the Museum of Modern Art (MAM) in Rio de Janeiro.

Marking (a little belatedly) the fiftieth anniversary of Miranda’s death in August 1955, “Carmen Miranda Forever” is being billed as the largest Miranda exhibition ever. Included are more than 700 items, from costumes and jewelry to records, magazines, and photographs.

Carmen Miranda became an international screen legend following singing, dancing, and “r”-rolling appearances as various South of the Border Chitas, Rositas, and Queridas in a series of tropical-flavored, enjoyably vapid, Hollywood Technicolor movies of the 1940s, which, on the downside, mostly failed to make full use of Miranda’s warm, exuberant personality and first-rate comic timing.

From Rio to Broadway

Born on Feb. 9, 1909, in a village in the vicinity of the northern Portuguese town of Marco de Canaveses, Carmen Miranda was raised in Rio de Janeiro, to where her family had emigrated while she was still an infant.

She began singing on the radio in the late 1920s, and a few years later was seen – at times accompanied by her younger sister Aurora Miranda – on the Rio stage and in musical numbers in a handful of Brazilian movies (e.g., Alô Alô Brasil, Banana-da-Terra). Next, she performed on Broadway, which led to a 20th Century Fox contract.

Along with her frilly, colorful costumes and the fruit salad she often wore atop her head, Miranda, nicknamed the Brazilian Bombshell, would remain at the studio until 1946. During that time, she was almost invariably seen as generic characters – usually with Hispanicized names – from somewhere south of the Rio Grande.

With the exception of a few elaborate musical numbers, her movies were equally generic. They gave her plenty of opportunities to sing (sometimes in Portuguese) and dance, but little opportunity to act apart from raising her eyebrows before exploding in “Latin” fury or delivering lines in her unique rat-a-tat manner.

If that weren’t all, the actual romantic leads in these star vehicles were Fox’s all-American blondes Alice Faye, Betty Grable, and (strawberry blonde) Vivian Blaine.

Below is a list of Carmen Miranda’s Hollywood movies. All but the last four were 20th Century Fox releases. Every title between 1940 and 1944 was in Technicolor.

Also in color were Miranda’s two Metro-Goldwyn-Mayer films, A Date with Judy and Nancy Goes to Rio.

Carmen Miranda’s last film appearance was what amounted to a cameo in the 1953 Dean Martin-Jerry Lewis comedy Scared Stiff.

She died of a heart attack on Aug. 5, 1955, in Beverly Hills – a day after suffering a minor attack during a taping of The Jimmy Durante Show. She was buried in Rio, where her hearse was accompanied by a crowd of 500,000.

Dec. 30 update: Carmen Miranda’s younger sister, Aurora Miranda, whose handful of film credits include Phantom Lady and The Three Caballeros (in which she wears a more discreet Carmen Miranda costume in the Bahiana style), died at age 90 on Dec. 22.

The Carmen Miranda Museum (Museu Carmen Miranda) in the Flamengo neighborhood in Rio de Janeiro is small but curated with love. Mostly it is a gallery of her costumes. She was such a *giant* of entertainment — it is startling to see that the garments were made for a *tiny* person.

I taught an Art class using my memory of Carmen Miranda and hercostume, as one I always wore as my costume for Halloween. NO one in the class knew who I was talking about ! I need a photo of her to show them , next time , just how beautiful she was ! I can’t seem to download the photo that accompanies this article !…HELP?