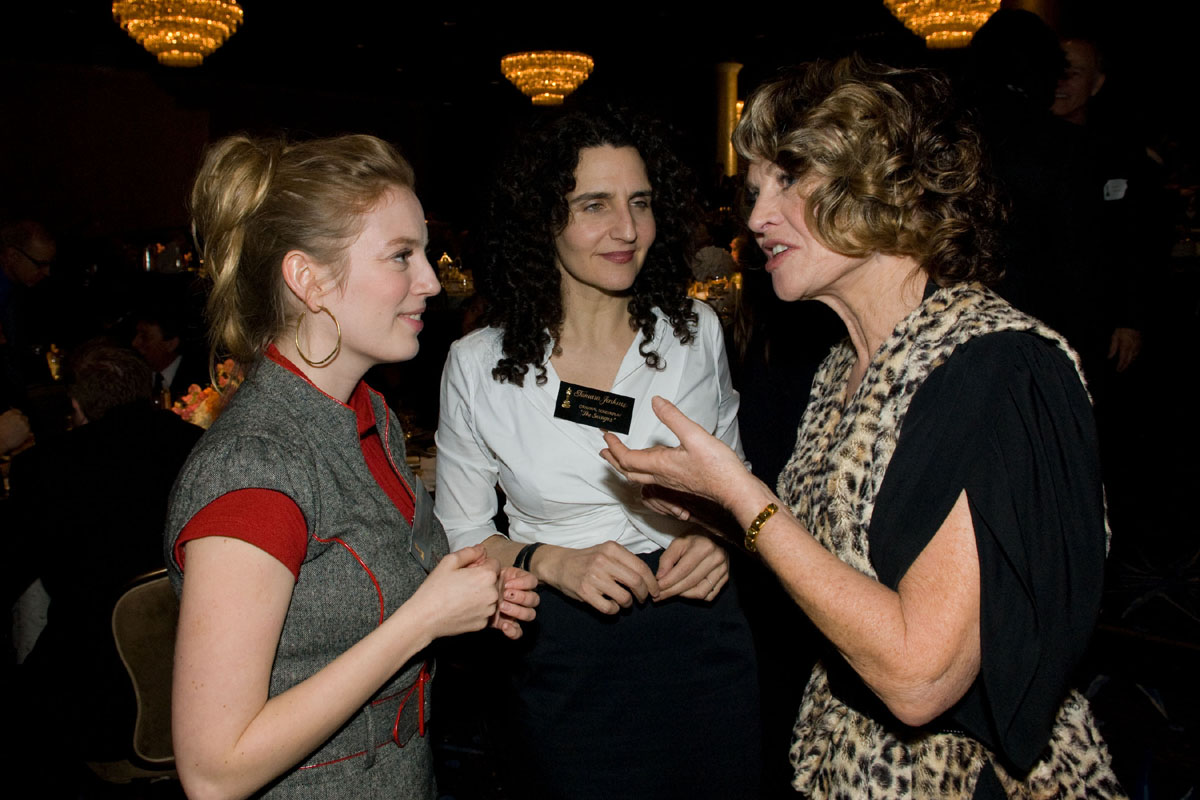 At the 2008 Oscar luncheon at the Beverly Hilton hotel on Monday, Academy president Sid Ganis remarked that “regardless of those circumstances, which are beyond our control, we will be presenting the awards as scheduled.”

Needless to say, “those circumstances” are the Writers Guild strike, which actually may be coming to a close.

Ganis added, “it would be such a terrible shame if, through no fault of yours and no fault of ours, the current conditions prevented us from shining that brightest possible light” on the Academy’s film achievers of 2007.

According to Michael Cieply’s New York Times article on the Oscar luncheon, “within the striking guilds a ferocious debate has divided writers into two groups: those who would grant the Oscars a truce in order to use the ceremony as a bully pulpit, and those who would inflict damage on the studios, and ABC, by chasing celebrities away from the show.”

As an aside: Cieply also states that Ganis’ speech clocked in at 9 minutes.

If all goes Ganis’ way, stars and writers will be present at the 2008 Academy Awards ceremony at the Kodak Theatre on February 24. 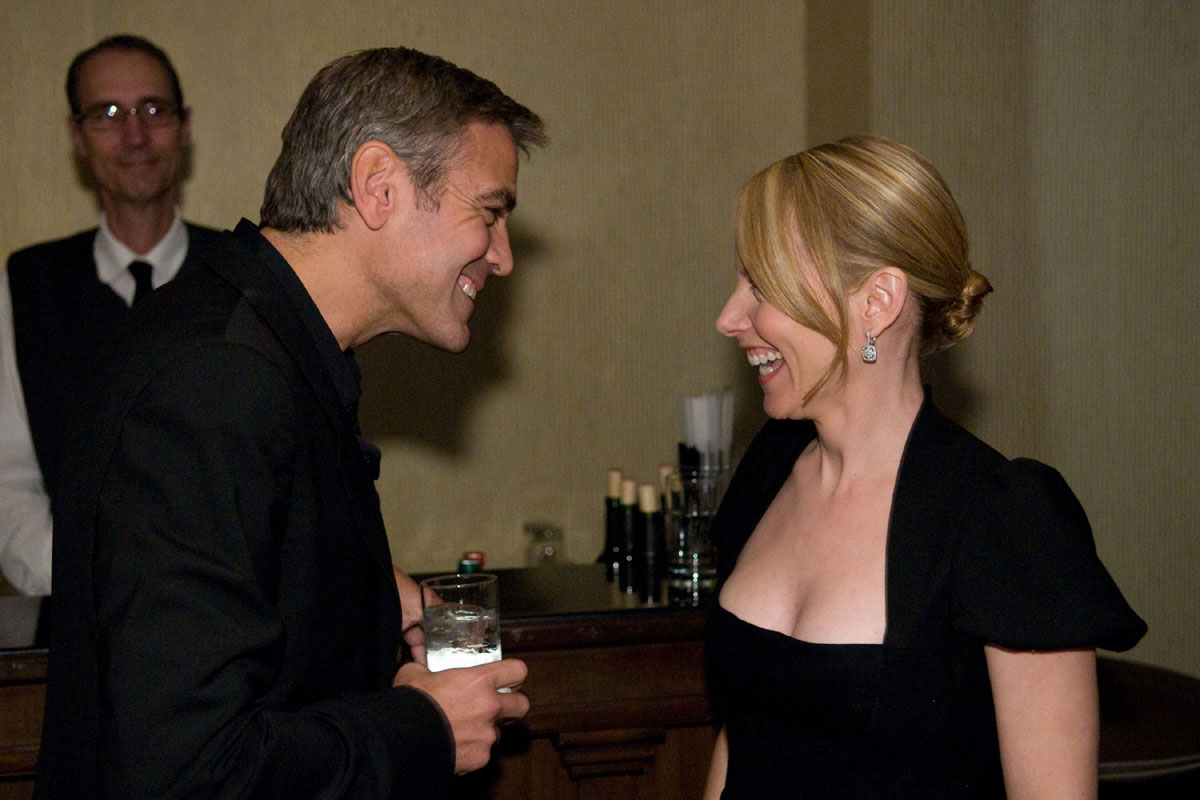 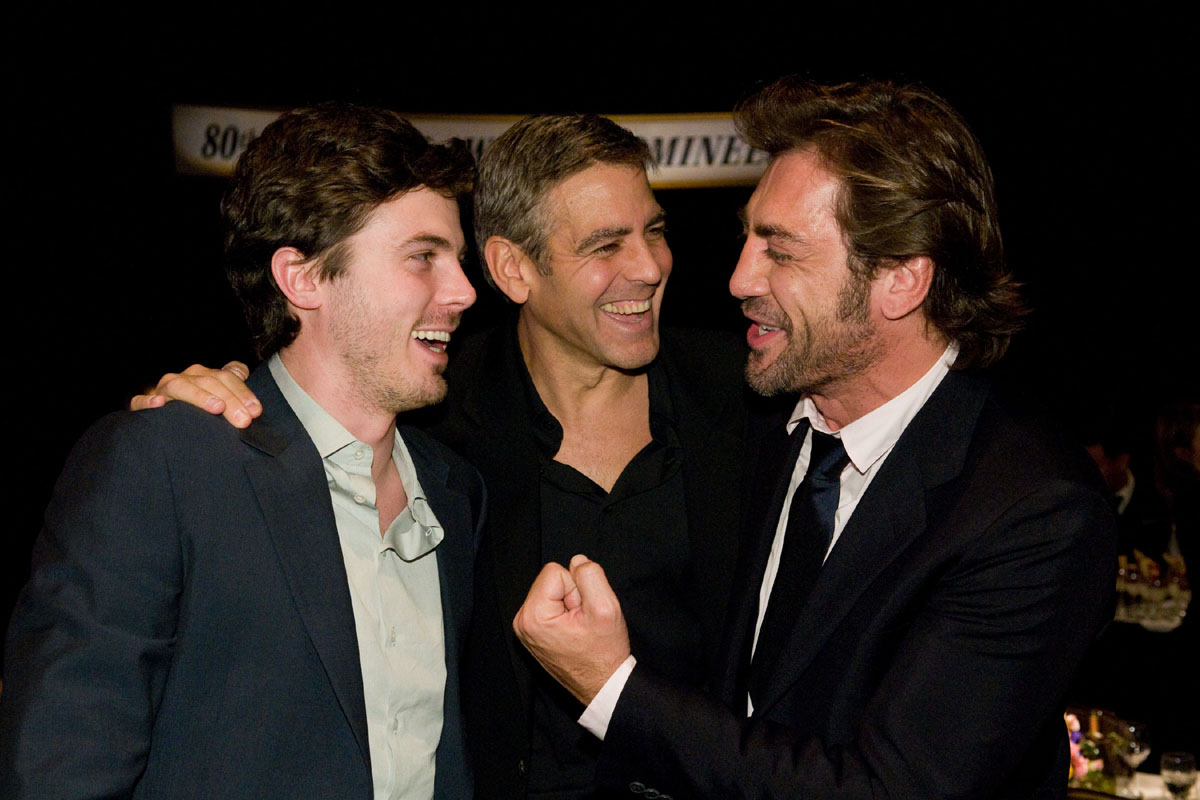 If the Writers Guild of America strike ends by then – and that’s now a possibility – the Academy Awards ceremony will be held in all its 4-hour glory on Sunday, Feb. 24, at the Kodak Theatre at Hollywood & Highland Center in Los Angeles.

Pictured above, seated, left to right:

Click on the image of the Oscar-nominated screenwriters to enlarge it.

The movies nominated in this year’s Best Writing categories are: 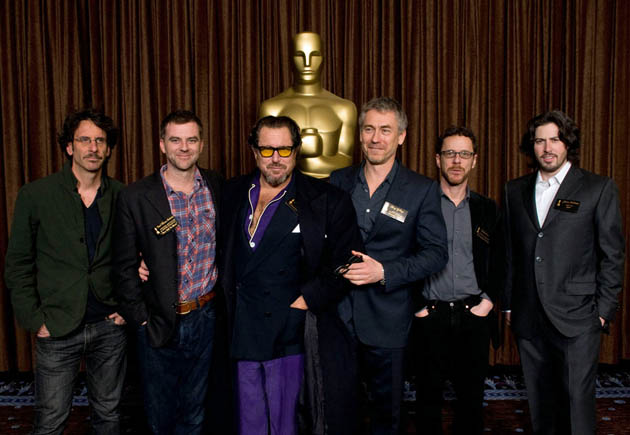 The movies nominated in the Best Director category are the following:

Click on the image of the Oscar-nominated directors to enlarge it.

The younger brother of actor-screenwriter-director Ben Affleck (Good Will Hunting, Gigli), Casey Affleck (born Aug. 12, 1975, in Falmouth, Massachusetts) has been featured in about 20 movies since his debut in Jan Egleson’s Lemon Sky (1988), starring Kevin Bacon. 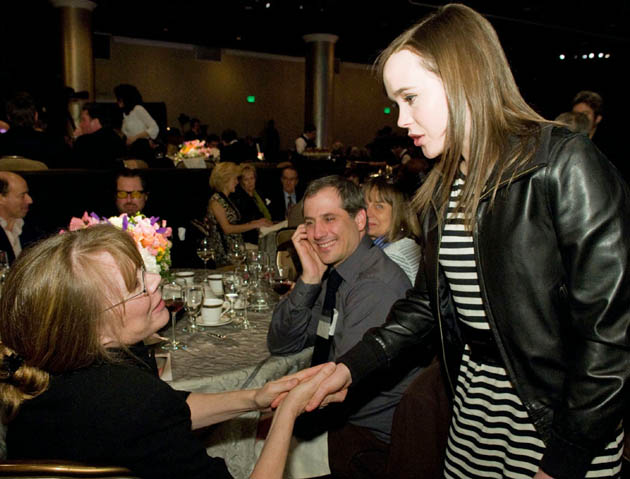 More than 100 2008 Academy Award nominees will get together at noon on Monday, February 4, 2008, at the Beverly Hilton Hotel in Beverly Hills for the Academy of Motion Picture Arts and Sciences annual Oscar Nominees Luncheon.

From the Best Actress and Best Actor categories, Away from Her‘s Julie Christie (who may be shy and reclusive, but who’s all over the map these days), La Vie en Rose‘s Marion Cotillard (who should win an Oscar for Best Accent), Laura Linney (The Savages), Ellen Page (Juno), George Clooney (Michael Clayton), and Viggo Mortensen (Eastern Promises) are expected to attend.

All six nominees from the Best Directing category – Paul Thomas Anderson (There Will Be Blood), Joel and Ethan Coen (No Country for Old Men), Tony Gilroy (Michael Clayton), Jason Reitman (Juno), and Julian Schnabel (The Diving Bell and the Butterfly) – are expected to attend.

Writers Guild of America strike or no, screenwriters to attend 2008 Oscar Nominees Luncheon

Additionally, all of the 13 Oscar-nominated screenwriters are scheduled to be present at the Oscar Nominees Luncheon – unlike at the Oscar ceremony proper, no scripts are necessary for this particular party; in other words, no one will be breaking any Writers Guild strike rules and regulations.

Besides Tony Gilroy, Paul Thomas Anderson, and the Coen brothers, the other Oscar 2008 writing nominees are Brad Bird, Jan Pinkava, and Jim Capobianco (Ratatouille), Diablo Cody (Juno), Christopher Hampton (Atonement), Ronald Harwood (The Diving Bell and the Butterfly), Tamara Jenkins (The Savages), Nancy Oliver (Lars and the Real Girl), and Sarah Polley (Away from Her).

Also expected to attend – but not to eat – are swarms of paparazzi and gawking tourists.

If the nominated writers really like the Oscar Nominees Luncheon’s buffet, then perhaps the 2008 Academy Awards ceremony will be able to proceed as usual on Sunday, Feb. 24, at the Kodak Theatre at Hollywood & Highland Center. Or perhaps not.

Tyler Perry’s Why Did I Get Married? Box Office: Latest Domestic Moneymaker