Two-time Oscar winner Cate Blanchett is reportedly slated to star in a biopic of former RKO and MGM actress and big-time television comedienne Lucille Ball. Aaron Sorkin, Oscar winner for David Fincher’s The Social Network, will be responsible for the screenplay.

According to Entertainment Weekly, the Lucille Ball film biopic will focus on Ball’s two-decade marriage to her I Love Lucy co-star Desi Arnaz. In 1960, the couple had an acrimonious divorce that supposedly “shocked” clueless fans unable to tell the difference between TV reality and real-life reality.

Their children, Desi Arnaz Jr. and Lucie Arnaz, had modest acting careers in film and on TV in the ’70s and ’80s. As per the EW.com report, they’re both producing the planned Lucille Ball biopic. No word yet on a director or other cast members.

Aaron Sorkin has become a sort of biopic writer emeritus of the early 21st century. Besides The Social Network, which revolves around Mark Zuckerberg (Jesse Eisenberg) and the creation of the mammoth social media website Facebook, Sorkin also wrote Steve Jobs, the Danny Boyle-directed, Oscar bait movie scheduled to come out in October. Michael Fassbender has the title role (played by Ashton Kutcher in Joshua Michael Stern’s critical and box office bomb Jobs in 2013).*

To date, there have been two made-for-TV Lucille Ball biopics: 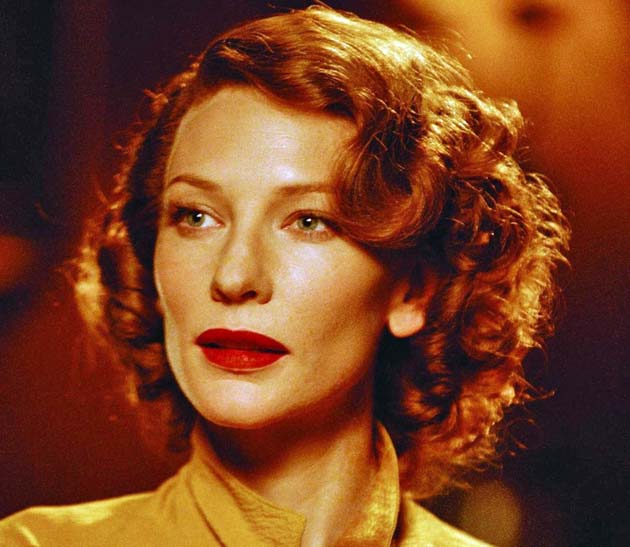 Cate Blanchett as Katharine Hepburn in ‘The Aviator.’

Cate Blanchett, for her part, has already portrayed a red-headed RKO actress: Katharine Hepburn, in Martin Scorsese’s Oscar-nominated Howard Hughes biopic The Aviator (2004). Blanchett was the year’s Best Supporting Actress according to Academy of Motion Picture Arts and Sciences voters, who would honor her again, as Best Actress, for Woody Allen’s Blue Jasmine (2013).

Although best known for her television work – besides I Love Lucy, there were The Lucy-Desi Comedy Hour, The Lucy Show, Here’s Lucy, and the 1986 comeback flop Life with Lucy – Lucille Ball was seen in more than 90 movies, from her days as a chorus girl in the early 1930s (Roman Scandals, Nana) to Gene Saks’ box office flop Mame (1974).

An RKO contract player in the ’30s – most notably in Gregory La Cava’s 1937 classic Stage Door, starring Katharine Hepburn and Ginger Rogers, and as a ditzy Hollywood actress in The Affairs of Annabel and its sequel, Annabel Takes a Tour – Ball went from minor leading lady to mid-level star in the ’40s, when as a Metro-Goldwyn-Mayer contract player, she became a more glamorized, Ann Sheridan-ized version of her RKO self.

Her best-known MGM efforts are probably Roy Del Ruth’s Du Barry Was a Lady (1943), with Red Skelton and Gene Kelly, and Irving Reis’ The Big Street (1942), in which she had a rare dramatic role. Henry Fonda co-starred. Ball also supported Katharine Hebpurn and Spencer Tracy in the 1945 melo Without Love.

In the ’50s, there were two movies with Desi Arnaz:

Image of Cate Blanchett as Katharine Hepburn in The Aviator: Warner Bros., via movpins.com.