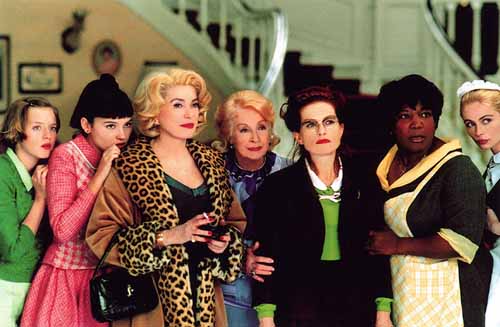 Laura Linney is a likable actress who has appeared in 30 or so films in the last 15 years. Does she deserve a tribute? Why not? Any performer who gets run over by a senile old man in drag – one wearing Linney’s own dress, to boot – merits recognition. Also, she was remarkably good in Kinsey, and held her own in Primal Fear, The Truman Show, The Exorcism of Emily Rose, and Driving Lessons (that is, until the auto mishap).

Her two Oscar nods were for You Can Count on Me (which I haven’t seen, yet) and – in the supporting category – for Kinsey.

Tamara Jenkins’ The Savages, in which Linney co-stars with Philip Seymour Hoffman, will follow the tribute at the ArcLight Hollywood on Friday, November 9.

Now, Catherine Deneuve. I don’t think anyone in his/her right mind would even think of asking if Deneuve deserves a tribute. After all, in the last half century the actress has appeared in about 100 motion pictures, many of which are international screen classics.

She has won 2 French Academy Awards, an Italian Academy Award, a (shared) European Film Award, a (also shared) best actress Silver Bear at the Berlin Film Festival, and a best actress Volpi Cup at the Venice Film Festival, along with career awards at festivals in San Sebastian, Moscow, and Bangkok. In addition, she was nominated for an Oscar for her role as a plantation owner in Southeast Asia in Régis Wargnier’s 1992 melodrama Indochine.

Catherine Deneuve is a perfect example of a performer who got better – much better, in fact – as she grew older. After playing numerous ice-cold princesses with, generally speaking, little underneath their creamy white complexion, Deneuve matured into an actress of unsuspected depth.

Actually, I should have said somewhat unsuspected depth. Deneuve, after all, had been perfectly cast as the housewife who enjoys kinky extra-marital romps in Luis Buñuel’s majestically perverse Belle de jour (left, 1967), and had been quite touching – even if dubbed – in Jacques Demy’s all-singing masterpiece The Umbrellas of Cherbourg (1964).

But her work in those two 1960s films, however effective, pale in comparison to her sexy vampire in Tony Scott’s stylish 1983 horror flick The Hunger (in which Deneuve’s sex scene with Susan Sarandon remains one of the highlights of 1980s cinema); her heartbreaking lesbian, in love with a younger woman and single-handedly bringing to life André Téchiné’s otherwise stilted 1996 drama Les Voleurs; her superb star turn in Nicole Garcia’s intricate 1998 drama Place Vendôme; and her quirky singing and dancing matron in François Ozon’s 2002 musical-cum-melodrama-cum-comedy-cum-murder mystery 8 Women.

Indeed, if it weren’t for the fact that the Academy Board of Governors clearly has an anti-woman bias, Deneuve would be a shoo-in recipient of a much deserved Honorary Oscar in the very near future.

The AFI FEST Deneuve tribute will take place at ArcLight Hollywood on Saturday, November 10, prior to a screening of Marjane Satrapi and Vincent Paronnaud’s acclaimed Persepolis, which features Deneuve’s voice work (and that of her daughter Chiara Mastroianni).

Glad we see eye to eye on Catherine Deneuve.

Now, Diane Keaton did play a different character in at least one film in the last 10-15 years: “Marvin’s Room.” The movie is not all that great — very soap-operaish — but the acting is generally superb.

Having seen much with Michelle Pfeiffer lately. (Though I’ve liked her since I first saw her in “Scarface.”)

Catherine has gotten much better with age whereas so many other performers keep playing the same role. Just look at Diana Keaton, she’s been playing the same part since BABY BOOM. Catherine has really gone out of her way not to look for safe roles, nothing at all safe about her career in general but the variety of her most recent performances is really shocking compared to her contemporaries. The only other person I can think of even remotely close to Catherine in terms of variety and daring is Michelle Pfieffer.

Thanks for the link. Béart is great to look at and she’s a stunning talent.

And yes, do check out “8 Women.” It’s not for everybody, but I hope you’ll find it *at least* amusing.