Channing Tatum and Alex Pettyfer play strippers in Steven Soderbergh’s next, a comedy entitled Magic Mike. Back in 1983, The Blue Lagoon‘s Christopher Atkins played a “sexy” dancer in John G. Avildsen’s drama A Night in Heaven; it flopped. Paul Verhoeven’s Showgirls (1995) was such a critical and box office disaster that it all but ruined the director’s Hollywood career. (True, Starship Troopers and Hollow Man didn’t help matters any.)

Will Soderbergh be able to strip the curse off of movies about strippers? Well, that all depends on how the filmmaker portrays his characters and the subject of sex. A moralizing movie about strippers, one that condescends to its characters, would definitely be a bad approach. That is, unless Soderbergh wants to lure only members of the censorship board of the Motion Picture Association of America. The fact is: prudes won’t bother watching something like Magic Mike, so it’d be useless to make a movie for them. Magic Mike‘s screenplay, by the way, was written by Reid Carolin, whose sole screenplay credit (as per the IMDb) is Deborah Scranton’s Rwanda genocide drama Earth Made of Glass.

Ah, come to think of it, there has been one highly successful movie about a stripper: Natalie Wood played Gypsy Rose Lee in Gypsy, directed by Mervyn LeRoy back in 1962. 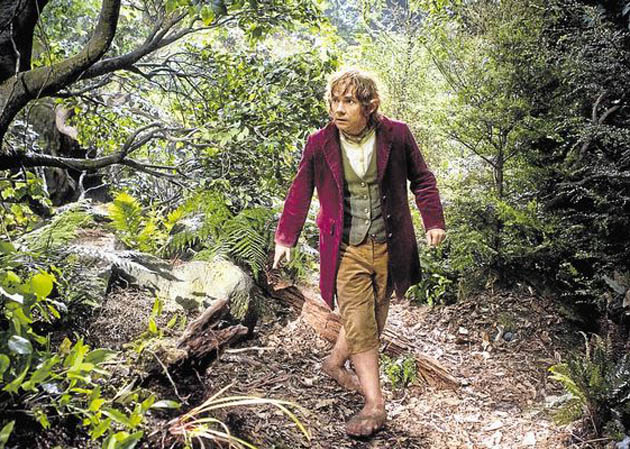 Actor Martin Freeman is seen above as Bilbo Baggins, the hero in Peter Jackson’s upcoming The Hobbit movies. The still was published on USA Today along with several other images from upcoming (potential) blockbusters.

Based on J.R.R. Tolkien’s novel The Hobbit, Jackson’s movie will be split into two box office-friendly parts:

The Lord of the Rings trilogy

Ten years ago, Peter Jackson had three consecutive blockbusters with the Lord of the Rings movies:

Since then, Jackson’s box office performance has been erratic, as King Kong (2005) turned out to be a disappointment – in relation to its $207 million cost and ape-high expectations – while the fantastical crime drama The Lovely Bones (2009), starring Saoirse Ronan, Rachel Weisz, and Mark Wahlberg, was both a critical and box office flop.

We’ll see if Jackson will recover his former box office glory with another Tolkien movie adaptation.

Of interest is that this year’s The Hobbit will be preceded by – at least – two medieval-like fantasy adventures:

In addition to Martin Freeman, the two Hobbit movies feature the following:

‘The Woman in Black’ Poster: Memories of ‘The Orphanage’ & ‘The Piano’

Looking at this gorgeous The Woman in Black poster, three things come to mind: a) where’s Daniel Radcliffe? b) The Orphanage c) The Piano

I’m assuming that the answer to the question is: Radcliffe is featured in the poster – at the very top. At least his name is. That should be enough to remind fans that the star of Harry Potter and the Deathly Hallows: Part 2 and all the other Harry Potter movies still has a film career. The poster image itself, however, is letting us know that this is going to be a creepy horror thriller.

As for thoughts b) and c), well, Juan Antonio Bayona’s The Orphanage is another creepy horror thriller featuring a woman (Belén Rueda, not necessarily dressed in black) and several ghostly children. And in Jane Campion’s The Piano, Holly Hunter wears a hooded cloak very similar to the one the Woman in Black has on in the poster.

In The Woman in Black, Radcliffe plays a young lawyer who is sent to a remote village that just happens to be haunted by a bent-on-revenge ghost. Directed by James Watkins from a screenplay by Jane Goldman (from Susan Hill’s 1983 novel), in addition to Daniel Radcliffe The Woman in Black features Ciarán Hinds, Shaun Dooley, Roger Allam, and potential Best Supporting Actress Oscar nominee Janet McTeer (Albert Nobbs).

The Woman in Black is scheduled to come out February 3. I’ll be very surprised if Daniel Radcliffe doesn’t show up at the Golden Globes to plug his latest picture.

Gene Hackman, Oscar winner for The French Connection and Unforgiven, was hit by a car while bicycling in Florida earlier today. According to TMZ (and TheWrap, quoting a highway patrol officer), Hackman suffered “serious injuries to his head and body,” and was later airlifted to a local hospital. According to Hackman’s rep, the 81-year-old actor (82 next January 30), “is fine, he is on his way home” (via Access Hollywood). Hackman was not wearing a helmet.

The driver, a 60-year-old woman, wasn’t hurt in the accident. The cause of the collision hasn’t been determined.

In addition to his Best Actor win for Franklin J. Schaffner’s thriller The French Connection (1971) and his Best Supporting Actor win for Clint Eastwood’s Western Unforgiven (1992) – both films also won Best Picture Oscars – Hackman has been nominated for three other Academy Awards: in the supporting category for Arthur Penn’s Bonnie and Clyde (1967) and Gilbert Cates’ I Never Sang for My Father (1970), as as a lead in Alan Parker’s Mississippi Burning (1988).

Hackman’s other films include Ronald Neame’s blockbuster The Poseidon Adventure (1972), with Carol Lynley and Shelley Winters; Francis Ford Coppola’s The Conversation (1974); Richard Donner’s Superman (1978), with Christopher Reeve and Margot Kidder; Woody Allen’s Another Woman (1988), with Mia Farrow and Gena Rowlands; Mike Nichols’ Postcards from the Edge (1990), with Meryl Streep and Shirley MacLaine; and Sydney Pollack’s The Firm (1993), with Tom Cruise and Holly Hunter.