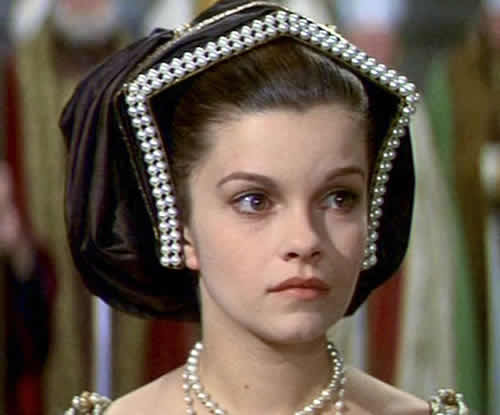 Geneviève Bujold as Anne Boleyn in Charles Jarrott’s Anne of the Thousand Days.

Charles Jarrott, best known for the period dramas Anne of the Thousand Days (1969) and Mary Queen of Scots (1971), and for the disastrous musical Lost Horizon (1973), died Friday, Feb. 4, at the Motion Picture Home in Woodland Hills. Jarrott, who was 83, had been suffering from prostate cancer.

In early 1970, the London-born Jarrott (June 16, 1927) made film history of sorts when his feature debut, Anne of the Thousand Days, was nominated for a total of 10 Academy Awards – more than any other movie that year – including Best Picture (produced by Hal B. Wallis), Best Actor (Richard Burton as Henry VIII), and Best Actress (Geneviève Bujold as Anne Boleyn), whereas Jarrott himself was bypassed by the Academy’s Directors Branch.

The only other comparable instance in the Academy Awards’ 83-year history is the omission of Steven Spielberg from the Best Direction shortlist in early 1986, despite the fact that his The Color Purple (1985) was up for 11 Oscars, including Best Picture. (Note: In 1942, Sam Wood’s Kings Row was nominated for 12 Oscars, but Wood wasn’t; Wood, however, was a Best Director nominee that same year for The Pride of the Yankees.)

Based on Maxwell Anderson’s play, Jarrott’s film had been considered by many an unworthy Best Picture contender. Universal, the studio’s distributor, thought otherwise, investing $20,000 in trade-paper ads for their year-end offering.

Damien Bona and Mason Wiley report in Inside Oscar that following a one-week presentation in Los Angeles for Academy Award consideration, the studio invited Academy members to catch Anne of the Thousand Days at special screenings where filet mignon and champagne were served to attendees.

Perhaps all that promotional effort was necessary to catch the eye and the palate of Academy voters, but personally I find Anne of the Thousand Days has gotten an undeserved bad rap. From Arthur Ibbetson’s discreet cinematography to most of the performances, this old-school Hal B. Wallis production is eons better than the vast majority of historical dramas Hollywood has churned out in the last … well, 100 years.

Even so, Anne of the Thousand Days ended up winning a single Oscar out of its ten nominations – for Margaret Furse’s costumes.

The Ross Hunter-produced Lost Horizon, however, all but did Jarrott in. Adapted by Larry Kramer (of the AIDS drama The Normal Heart), this all-star musicalized version of James Hilton’s Shangri-La-set novel was both extremely expensive and a huge critical and box office bomb. Among those who sank both their teeth and their talents singing and dancing (or just talking) to the sound of Burt Bacharach’s cringe-inducing music were Liv Ullmann, Peter Finch, Sally Kellerman, George Kennedy, Olivia Hussey, Michael York, Charles Boyer, and John Gielgud.

“This Lost Horizon, with Peter Finch at the head of a not-quite-all-star cast, is a big, stale marshmallow, notable, perhaps, in that most of it was filmed in and around Hollywood at what is reported to have been a rather large budget,” wrote Vincent Canby in the New York Times. “Money apparently doesn’t go very far in Hollywood these days, for the film, in addition to packing all of the dramatic punch of a Moral Re-Armament pamphlet, is surprisingly tacky in appearance.”

Jarrott’s 1977 period romance The Other Side of Midnight, starring Marie-France Pisier, John Beck, and Susan Sarandon, wasn’t exactly well-received, either. The film, however, did find a sizable audience among fans of absurd tearjerkers. (Sarandon is actually quite good in this tedious, melodramatic mess.)

Also: The Strange Case of Dr. Jekyll and Mr. Hyde (1968), starring Jack Palance; The Woman He Loved (1988), notable for the presence of veteran Olivia de Havilland; and the fantasy tale The Christmas List (1997), with Mimi Rogers.

Image: Via the Los Angeles Times

Fourth of July Movies: Escapism During a Weird Year

Honor the man, don’t put him down. When was the last time you saw Lost Horizon? Don’t criticize it if you’ve never seen it. Lost Horizon did make a bundle of money overseas. This is something that is never talked about. Why? Because Americans like yourself think that if it doesn’t happen in America, it just doesn’t happen anywhere.

I wrote an obit (with commentary), not an homage.
I have seen “Lost Horizon,” though I admit it’s been a while. Anyhow, the review snippet found in the piece is Vincent Canby’s, not mine.
I don’t know what your source is for the “bundle of money overseas” claim. I’ll see what I can find on that.
And by the way, I’m fully aware I live in a big and diverse world.

You didn’t have to be so mean spirited about LOST HORIZON. It wasnt’ the disaster you claim it was. The film made it’s money back in overseas markets and today has a strong cult following.

“Lost Horizon” WAS a disaster, both critically and commercially. I wasn’t being mean-spirited. I was stating a fact.
What’s your source for the overseas market figures? I certainly haven’t seen those anywhere.