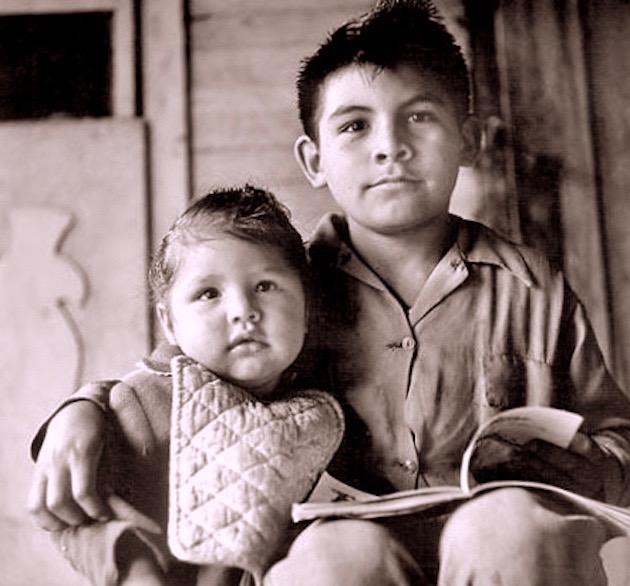 Jan 25 update: As part of the Academy of Motion Picture Arts and Sciences, the Academy Foundation, and the UCLA Film & Television Archive’s “Contemporary Documentary” series, the documentary shorts/featurettes Chávez Ravine: A Los Angeles Story, Autism Is a World, Best Sister, and Hotel City will be screened on Feb. 1 at the James Bridges Theater on the UCLA campus in Los Angeles’ Westwood neighborhood. The screenings will begin at 7:30 p.m.

In the early 1950s, the local government began acquiring properties in the Chávez Ravine area in order to build a low-income public housing project. Instead, after razing homes, a school, and a church, the powers-that-be opted to sell the land to Brooklyn Dodgers baseball owner Walter O’Malley, who proceeded to erect Dodger Stadium, completed in 1962.

On the Public Broadcasting System’s website, Chávez Ravine: A Los Angeles Story is described as a document of “how this Mexican American community was destroyed by greed, political hypocrisy and good intentions gone awry.” In June 2005, the documentary was shown on PBS as part of its “Independent Lens” series.

Up in Smoke and Born in East L.A. actor Cheech Marin narrates Chávez Ravine: A Los Angeles Story, which features music by Ry Cooder with vocals by Lalo Guerrero, who died at age 88 in March last year.

Autism Is a World & ‘pseudoscience’ controversy

Nominated for the 2004 Best Documentary Short Academy Award, Gerardine Wurzburg’s Autism Is a World tells the story of Sue Rubin, who at age 13 began making use of the highly controversial “facilitated communication” techniques – considered “pseudoscience” by the scientific establishment. According to the film, which was written by Rubin herself, she ultimately succeeded in overcoming the obstacles resulting from her autistic condition.

TV’s ER and The Sopranos actress Julianna Margulies narrates Autism Is a World.

Ira Wohl’s Best Sister (2006) focuses on the filmmaker’s elderly cousin, Frances Reiss. In 1979, Wohl won an Oscar for the documentary feature Best Boy, which has as its center Frances’ mentally handicapped brother, Philly. A sequel, Best Man: ‘Best Boy’ and All of Us Twenty Years Later, came out in 1997.

Viola Liuzzo. Murdered at age 39 on March 25, 1965 – the victim of a Ku Klux Klan attack – Viola Liuzzo is the only white woman to have been killed for taking part in the United States’ Civil Rights Movement of the 1950s and 1960s. A Detroit resident and mother of five children, she would posthumously become the victim in a character assassination campaign led by J. Edgar Hoover’s FBI. Liuzzo is the subject of Paola di Florio’s 2004 documentary feature Home of the Brave, to be screened at UCLA in February.

The presentation, part of the Academy of Motion Picture Arts and Sciences, the Academy Foundation, and the UCLA Film & Television Archive’s “Contemporary Documentary” series, is free and open to the public.

Home of the Brave explores the murder of 39-year-old Viola Liuzzo, known as the only white woman deliberately killed because of her participation in the United States’ Civil Rights Movement. Liuzzo was murdered at the hands of Ku Klux Klan members (including one with ties to the FBI) following the Martin Luther King Jr.-led 1965 Selma to Montgomery marches in Alabama.[1]

Despite FBI honcho J. Edgar Hoover’s attempts to besmirch her character, the death of this one white woman has been credited as having given U.S. President Lyndon Johnson the necessary political leverage to have Congress pass the Voting Rights Act, prohibiting racial discrimination in voting. (Update: See CNN article on Liuzzo’s death and the Voting Rights Act.)

Home of the Brave was produced by Nancy Dickenson.

The 40-minute Mighty Times: The Children’s March depicts the Children’s Crusade of 1963 – organized acts of civil disobedience executed by 5,000 black children and adolescents in Birmingham, Alabama.

Despite fierce reprisals from what’s called “law enforcement,” they eventually helped to bring down the white racist establishment that local police and politicians were eager to protect and to serve.

Mighty Times: The Children’s March, which ran into controversy after the (officially) documentary short was “accused” of being a docudrama, was executive-produced by Robert Hudson, who also produced and directed the 2002 documentary Mighty Times: The Legacy of Rosa Parks.

Two other Home of the Brave movies

[1] Home of the Brave is also the title of a 1946 Arthur Laurents play about racial discrimination. Directed by Mark Robson, a film version was released in 1949, with James Edwards, Douglas Dick, Jeff Corey, Lloyd Bridges, Frank Lovejoy, and Steve Brodie in the cast.

The upcoming Iraq War-themed Home of the Brave, directed by Irwin Winkler, and toplining Chad Michael Murray, Jessica Biel, Samuel L. Jackson, 50 Cent, and Christina Ricci, is unrelated to both the Paola di Florio documentary and the 1940s play/feature.

Roger Ebert: Film Critic + Beyond the Valley of the Dolls Screenwriter

Ruth Warrick: From Citizen Kane to All My Children