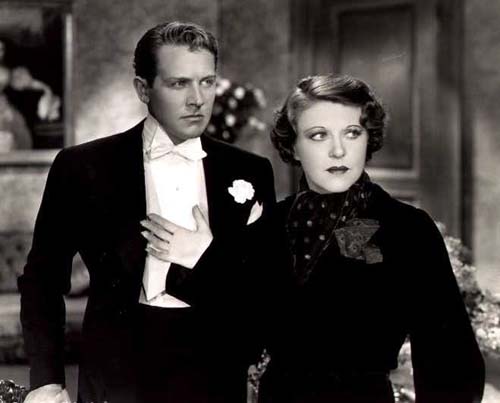 “Chick flick movies” vs. women’s pictures: Ruth Chatterton in The Lady of Secrets with Robert Allen.

Ruth Chatterton knew better than most how to succeed in a man’s world. Robert Allen is the guy in the picture. The film is The Lady of Secrets (1936).

‘Until recently, most American film critics had a cultural bias against “women’s pictures,” seeing them as less serious by definition than films revolving around male preoccupations. The labeling of [George] Cukor as a “woman’s director” – promoted by the MGM publicity department, particularly after he directed an all-female cast in The Women (1939) – also served as thinly veiled code for “gay.” Today, however, thanks to the feminist movement’s influence on film historians, women’s pictures (sometimes colloquially referred to as “chick flicks”) are seen as deeply expressive of social undercurrents and psychological complexities.’

“I differ with McBride on scrunching ‘women’s pictures’ and ‘chick flicks’ together as synonymous, although there is some overlap. The traditional women’s picture was pre-feminist in its attitudes, despite the feisty independence of its leading ladies and their upright carriage and unbowed heads; it was rooted in a world in which poverty, shame, and social ostracism made each step out of bounds, each break with false propriety, more precarious. There was no safety net should one morally fall. The chick flick is a post-feminist construction cushioned by affluence and aired out with sexual liberty. In the contemporary chick flick (not to be confused with the courtship costume drama – all those bodice-y Jane Austen revivals), poverty has been banished to the far, unseen boroughs, puritan ethics are espoused only by hypocrites, and society consists solely of one’s immediate family, circle of friends, and whoever happens to be hanging around the living room.”

Though Wolcott’s lengthy piece is worth a look, I side with McBride here. (Except when it comes to his statement that the moniker “women’s director” was a “thinly veiled code for gay.”)

There were loads of “women’s pictures” from the 1910s to the 1960s that were thoroughly sympathetic to their suffering or determined or liberated or contented women.

Ruth Chatterton, Ann Harding, Barbara Stanwyck, and Norma Shearer (right), to name only four, may have sinned and suffered in many of their films, but our sympathies were always with them. And not because in the last reel they were usually paired up with some conventional all-American moron (often George Brent) much weaker than they were. In fact, even Stanwyck’s latter-day villains were cool enough to merit getting away with murder – if only the Production Code would have allowed.

As for comedies, Katharine Hepburn, Irene Dunne, Jean Arthur, Claudette Colbert, and Rosalind Russell were almost invariably Spencer Tracy’s or Cary Grant’s or James Stewart’s or Fred MacMurray’s equals, if not their superiors. After The End, no matter how pro-status quo that may have been, you just knew those women would end up ruling their households.

And watch the now unfairly forgotten Alice Joyce switch places with husband Clive Brook in The Home Maker (1925) or leave obnoxious husband and daughter (Norman Trevor and Clara Bow) behind to live her own life in Dancing Mothers (1926). You can’t get much more “post-feminist” than that. 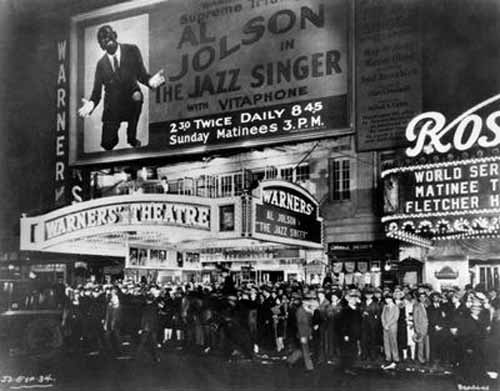 In The Guardian, six film critics and/or historians “boil cinema history down to the story of six years that altered the course of the movies.” The article is titled “The difference a year makes.” The years and authors in question are 1927 (Michael Hann), 1947 (David Thomson), 1959 (Steve Rose), 1967 (Mark Harris), 1975 (Peter Bradshaw), and 1994 (Andrew Pulver).

A couple of sample paragraphs, from David Thomson’s take on the year 1947:

“It was the best of times and the worst of times. In 1947, carrying on the surge in attendance that marked the war years, the American box office reached sales of 100 million tickets a week. It has never again come near that number. And it was in 1947 that the Supreme Court judgment (long feared, long resisted) was being formulated that would compel the major studios to sell off the theatres they had owned. The golden age of the movies, it was decided, was founded on an un-American monopoly. In the same space of time, the craven studio system agreed to participate with the House Un-American Activities Committee. In just two years, the euphoria of victory and peace had given way to the paranoia of the cold war and the decision of Huac to make Hollywood a focus of its activities rooted the age of anxiety in Beverly Hills.

“You could feel it in the best American films, not just Crossfire (a study of anti-Semitism), but in Frank Capra’s It’s a Wonderful Life, in which the Jimmy Stewart character, close to despair and suicide, has a vision of what his town might be like without him. That film ended cheerfully, but no one could forget its dark dream. In France, some critics saw the new brand of film from America – suspicious, shadowy, fatalistic – and they called the trend “film noir”. In fact 1947 is a vintage year for the new genre, with Crossfire, Desperate, Out of the Past, Dark Passage, Gilda, Scarlet Street, Body and Soul, Kiss of Death.”

I’m no fan of reductionism, though, of course, I’m fully aware that one is not supposed to take literally the authors’ simplification of film history. In any case, each of them makes some perfectly valid points in their essays, all of which are worth reading.

For instance, Michael Hann explains the importance of The Jazz Singer and the year 1927, when sound and Al Jolson’s hamminess put a stake through the heart of silent movies (and most silent movie performers and directors as well), while Andrew Pulver discusses Pulp Fiction‘s and Four Weddings and a Funeral‘s undeniable – and, in my view, disgraceful – effect on, respectively, post-1994 American and British films. (Pulver, however, fails to mention that European gangster movies and Eurotrash fare have inspired Quentin Tarantino’s work – and, by extension, the work of his countless imitators.)

(And personally, I found Stewart’s “dark dream” in It’s a Wonderful Life infinitely rosier than that film’s conformist, boxed-in conclusion. Now, that was trauma-inducing.)

Nor did the New Wave suddenly make “Hollywood movies stiff.” For that, one can go as far back as, say, Marcel Carné’s and Jean Renoir’s work in the 1930s and 1940s, or Vittorio De Sica’s and Luchino Visconti’s neo-realist efforts of the 1940s and 1950s.

Although it’s true that John Cassavetes’ Shadows is a sort of landmark in American film history (simply because it was Cassavetes’ first film), the 1959 talent that proved “that young audiences wanted to see a world they could relate to on their screens” was not Cassavetes (above, left) but Sandra Dee (above, right) in Gidget.

As for the demise of the Production Code, that all began in 1953, not 1967 (as Mark Harris’ text implies), when Otto Preminger (via United Artists) released The Moon Is Blue (in which, gasp!, the word “virgin” is mentioned) without the Production Code Administration’s seal of approval. By the mid-1960s, as attested by The Pawnbroker (1965) and Who’s Afraid of Virginia Woolf? (1966), the moribund Code was already on its way out. (For cracks in the Code, one may actually go as far back as Howard Hughes’ The Outlaw, originally – albeit briefly – released in 1943, and then rereleased to hungry audiences in 1946/47/50.)

(As an aside … And to think that Krzysztof Kieslowski’s Three Colors: Red could have been the Cannes festival’s Palme d’Or winner in 1994 [instead of Pulp Fiction]. But then again, it’d have mattered little in terms of cinematic influence – just like it doesn’t matter that won the Palme d’Or in 2007. Indeed, you can bet your Carl Theodor Dreyer Special Edition Box Set that for years to come, imitators will follow the Coen Bros. – whose No Country for Old Men received no top awards at the festival – not the Cristian Mungiu route.)

What about 1912, when the feature-length film – e.g., Enrico Guazzoni’s Quo Vadis? in Italy, Sidney Olcott’s From the Manger to the Cross in the United States – proved itself a viable enterprise? Talk about revolutionizing the industry.

Or 1939, the official apogee of the studio era, when released titles included Gone with the Wind (right), Gunga Din, Mr. Smith Goes to Washington, The Wizard of Oz, Wuthering Heights, The Roaring Twenties, and Ninotchka? That same year, Jean Renoir’s The Rules of the Game caused a sensation in France, while director Marcel Carné and screenwriter Jacques Prévert’s moody 1939 release, Le Jour se lève, would (along with Renoir’s 1938 drama La Bête humaine) end up influencing Hollywood’s own film noir.

Or 1948, the year movie theaters began losing millions of paying customers to television; Vittorio De Sica released the acclaimed and highly influential neo-realist drama Bicycle Thieves; Jules Dassin and crew left the Hollywood soundstages for the streets of New York City to create The Naked City; and the film world lost two of its most innovative talents, Sergei Eisenstein and D.W. Griffith? And by the way, 1948 was the actual year the United States v. Paramount Pictures, Inc., anti-monopoly lawsuit reached the Supreme Court.

Or 1977, the year of Star Wars and Close Encounters of the Third Kind, two sci-fi flicks that spawned a seemingly infinite number of sequels, prequels, and imitators, many of which continue to plague movie screens and DVD shelves to this very day. That was also the year that Woody Allen went (somewhat) serious with Annie Hall, John Travolta shook his tush in Saturday Night Fever, and Luis Buñuel, alas, made his last film, That Obscure Object of Desire. And I’m assuming that the epoch-making Debbie Does Dallas, released in 1978, was filmed (or at least planned) in ’77.

You have a point there.
And let’s not forget Erich von Stroheim’s “The Merry Widow,” which, along with “Ben-Hur” and “The Big Parade,” solidified the position of the newly founded Metro-Goldwyn-Mayer as one of Hollywood’s top studios.
Ah, and that was also the year Greta Garbo was lured to Hollywood, after appearing in G. W. Pabst’s “Street of Sorrows” in Germany.