Tina Mascara and Guido Santi’s Chris & Don. A Love Story opened today in New York City and will be opening in Los Angeles at the Nuart in West LA on July 4.

Chris & Don chronicles the relationship between British writer Christopher Isherwood, whose The Berlin Stories inspired the musical Cabaret, and his American companion, Don Bachardy, who, during the course of their lives together, developed into a respected portrait artist.

In 1953, on Malibu beach, Isherwood, then 49 years old, met Bachardy, who had just turned 18. Despite some difficult times, the couple would remain together until Isherwood’s death in 1986. As Bachardy himself wryly explains in the documentary, Isherwood taught him “all kinds of wicked things” – and “it was exactly what the boy wanted.”

In addition to Bachardy’s narration and on-camera appearances, the documentary features home movies (some featuring the likes of Tennessee Williams, Igor Stravinsky, and W. H. Auden), Michael York (who played the Isherwood-like character in Bob Fosse’s 1972 film version of Cabaret) reading passages from Isherwood’s novels, letters, and diaries; and interviews with, among others, Leslie Caron, John Boorman, and Liza Minnelli.

“Of all the people I came to know in Los Angeles,” said Boorman, “their marriage was the only one that endured.”

Reviews have been highly positive. In the LA Weekly, Chuck Wilson talks about “a genuine love story grounded in the artistic inspiration the two men found in each other,” while in The Hollywood Reporter Kirk Honeycutt calls Mascara and Santi “superb filmmakers, fully alive in their terrific film … to all the undercurrents of art, social class, sexual orientation, challenging relationships and, most especially, the touching love story at the heart of their film.” 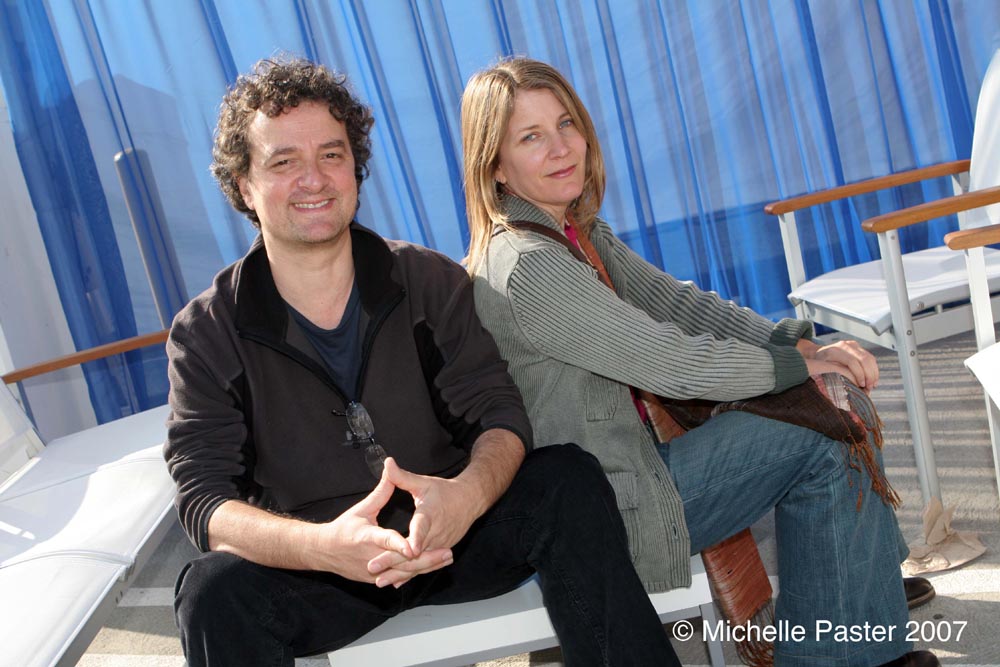 Directors Mascara and Santi (right) have kindly agreed to take part in a brief q&a (via e-mail) for Alt Film Guide. See below.

For more information on playdates in the United States, go here.

Don Bachardy and Christopher Isherwood in front of David Hockney’s 1968 portrait of themselves. 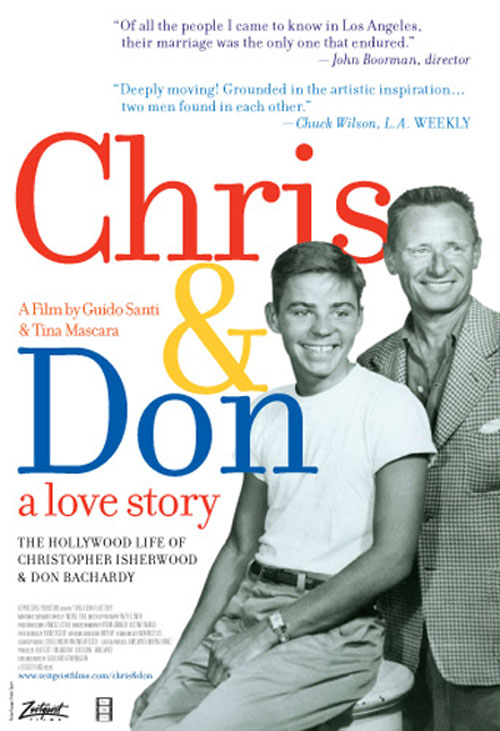 How did you get the idea to direct Chris & Don? What attracted you to the project?

The idea to make a documentary about Chris and Don was first suggested by Julia Scott, one of our producers, but it wasn’t until four years ago that Guido and I decided to fully commit and make it happen. What convinced us to go ahead with the project was the fact that Chris and Don had a very unique and extraordinary relationship. They were openly gay in the fifties, they were 30 years apart in age, and they were both artists. We wanted to understand how they made it last for a lifetime. For us, their love transcends gender and time, and everyone can relate to it.

Some people would be repelled by two men sharing a “love story,” let alone – in these hypersensitive politically correct times – when, initially, one man was 49 and the other 18. Did you feel the need to make your characters – especially Christopher Isherwood – sympathetic?

No, we did not. Although the age difference is a big part of their story – because Don was so young when they met – we think that Chris was exactly the right person for Don and vice versa. In fact, we believe that their relationship can inspire other people facing similar challenges. We never thought that either one was ever a predator or a victim.

How difficult (or easy) was it to get Don Bachardy to open up for the camera – and for you as the filmmakers? The documentary includes several interviews with Isherwood’s friends. Were there any who refused to collaborate?

Trust grew over time even if we have known each other for years. It was important for us to build this trust because we wanted the film to be a personal and intimate portrait of their relationship. Don opened up his heart, and gave us all the insights that we needed to tell our story. He never deflected a question, and he was always utterly honest. The same honesty that he and Isherwood shared in their relationship. They never hid anything from each other, even if it was unpleasant. And this honesty, as recorded in their diaries, may have hurt a few people who did not want to talk to us – only a couple.

How did you split the directorial duties?

We shared all responsibilities from production to post – we never had a problem with each other. We share similar aesthetics, and know when to give the other creative space. Most of all, we like to tell stories and enjoy every step of the process.

Christopher Isherwood and Don Bachardy as a sort of Pygmalion and Galatea or Henry Higgins and Eliza Doolittle. Would that be a fair assessment of their relationship or a total misreading of it? Or something in-between?

Actually, Don says in the film that he is an unconscious impersonator, and certainly he modeled himself after Chris, but, on the other hand, what a fine role model he had! Isherwood was a witty, well-traveled, successful writer with many talents and certainly he would have been irresistible.