Chris Colfer, who became known as one of stars of the television series Glee – he won a Golden Globe last year for his performance as Kurt Hummel – and one of the relatively rare openly gay actors in Hollywood, is seen above on the 2012 Golden Globes’ Red Carpet just outside the Beverly Hilton Hotel in Beverly Hills, on Sunday, Jan. 15.

No Glee cast member was nominated for a Golden Globe this year. The series itself, however, was up for Best Television Series – Comedy or Musical.

Additionally, Glee star Jane Lynch was one of the presenters at the ceremony.

The number of Chris Colfer movies is quite small. In fact, Colfer’s sole listed film credits on the IMDb are:

There’s also the upcoming Struck by Lightning, written by Colfer himself and directed by Brian Dannelly. The comedy-drama about a high school student who blackmails his classmates into contributing to his literary magazine features the following:

Chris Colfer’s television career has been basically restricted to his appearances in Glee and related shows.

Not only does he play a gay character in Glee – the countertenor Kurt Hummel – but Chris Colfer is openly gay in real life as well, having publicly come out in late 2009.

Back then, Colfer stated that prior to coming out his answer to questions about his sexual orientation usually was “that I was straight as every other actor in Hollywood.”

In March 2012, he will be featured in a special Los Angeles stage production of Dustin Lance Black’s play 8, described as a reenactment of the federal trial that overturned California’s infamous Proposition 8, which (temporarily) banned same-sex marriage in that state.

The 2012 Golden Globes’ other television winners were: 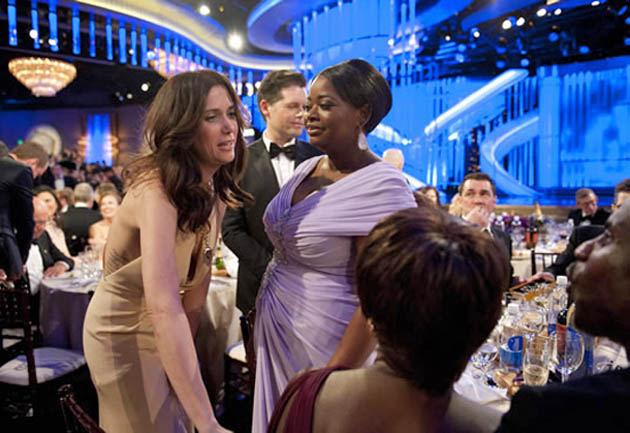 Kristen Wiig and Octavia Spencer are pictured above at the 69th Annual Golden Globe Awards at the Beverly Hilton hotel.

Kristen Wiig’s competition for Best Actress in a Motion Picture Comedy or Musical consisted of:

As mentioned earlier in this post, Kate Winslet came out victorious in the Best Actress in a Television Movie or Miniseries for playing the titular character in Todd Haynes’ Mildred Pierce.

Jodie Foster, for her part, didn’t win anything, but she was the butt of Golden Globes ceremony host Ricky Gervais’ “beaver” jokes, referring to female genitalia, Foster’s sexual orientation, and her little-seen movie starring Mel Gibson (that’s The Beaver). Funny?

Spencer is currently the favorite to take home the Best Supporting Actress Oscar. 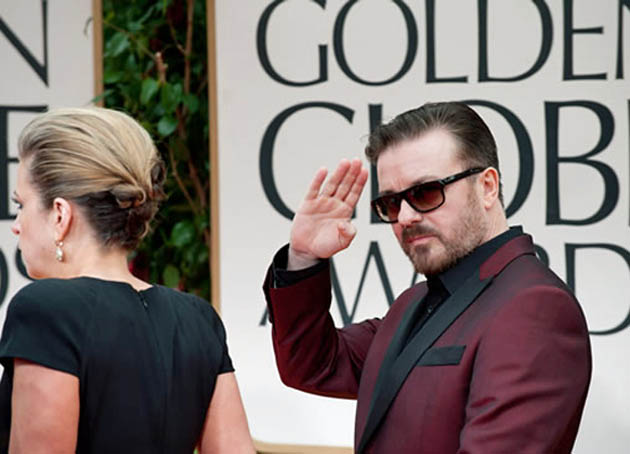 Ricky Gervais, sporting a Ted Baker aubergine tux, is seen above while arriving at the Beverly Hilton hotel in Beverly Hills on Sunday, Jan. 15, ’12. Gervais was this year’s host of the Golden Globes ceremony, where he was expected to roast a selected elite among the Hollywood celebrities in attendance (and elsewhere), thus generating more media buzz for his himself and his barbs than for the nominees/winners.

Last year, Ricky Gervais’ hosting duties led to a series of both positive and negative comments after he made fun of, among others, Golden Globe nominee The Tourist and its two nominated stars, Johnny Depp and Angelina Jolie; and (allegedly) gay Scientologists (no names were named, but Tom Cruise and John Travolta are two famous Scientologists who have been persistently followed by gay rumors).

Some found Gervais hilarious; others found him mean-spirited and vulgar. Whatever your take, television ratings were up. Unsurprisingly, Gervais was brought back this year.

As the Golden Globes host, Ricky Gervais presented some of the awards presenters. The extensive list included:

Best known for the television series The Office, Ricky Gervais has also been featured in several movies, usually in supporting roles. These include the following: 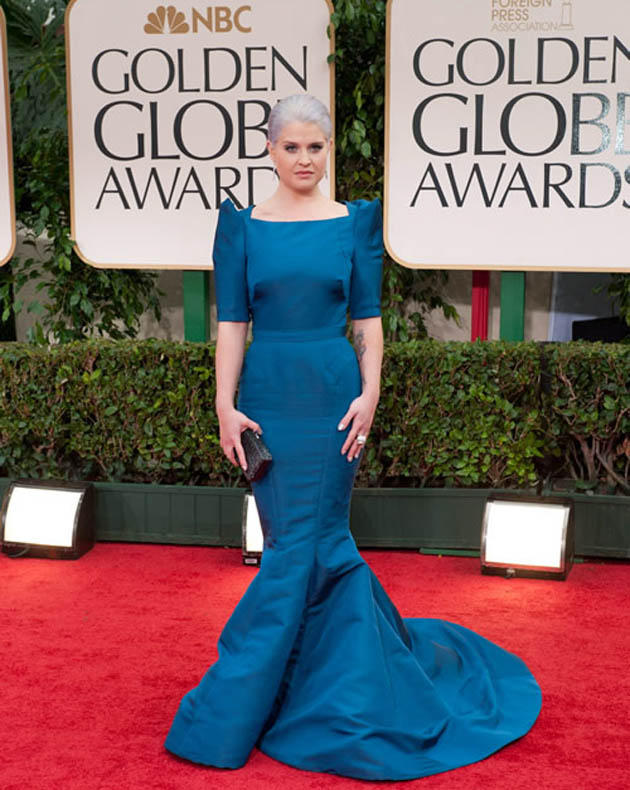 Pictured above is Kelly Osbourne on the 2012 Golden Globes’ Red Carpet outside the Beverly Hilton in Beverly Hills.

The daughter of Ozzy Osbourne and Sharon Osbourne, Kelly Osbourne is best known for her appearance in a number of TV reality shows.

On the big screen, her voice can be heard in John Roecker’s Live Freaky Die Freaky (2006), also featuring the voices of Henry Rollins, Asia Argento, Travis Barker, Joel Madden, Benji Madden, and others. 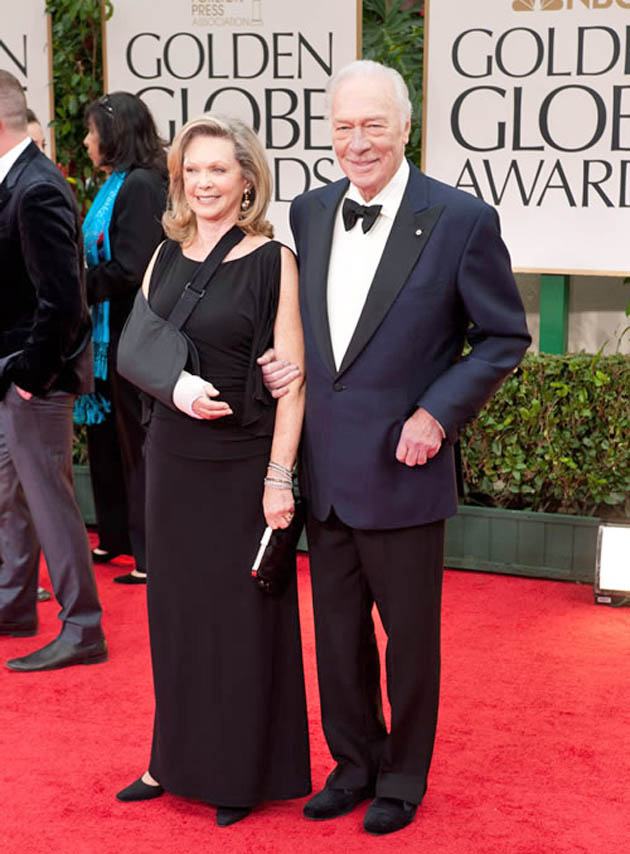 Christopher Plummer and wife Elaine Taylor are seen above on the Golden Globes’ Red Carpet. A Golden Globe nominee as Best Supporting Actor in a Motion Picture for his performance as Ewan McGregor’s gay father in Mike Mills’ Beginners, Plummer turned out to be the (expected) winner in his category.

His competition consisted of:

Christopher Plummer’s wife since 1974, Elaine Taylor was featured in a handful of movies in the late 1960s. Here are a couple of titles:

Katharine McPhee’s film credits are few. According to the IMDb, McPhee has been featured in only five movies to date.

Among Katharine McPhee’s television credits is the series Smash. 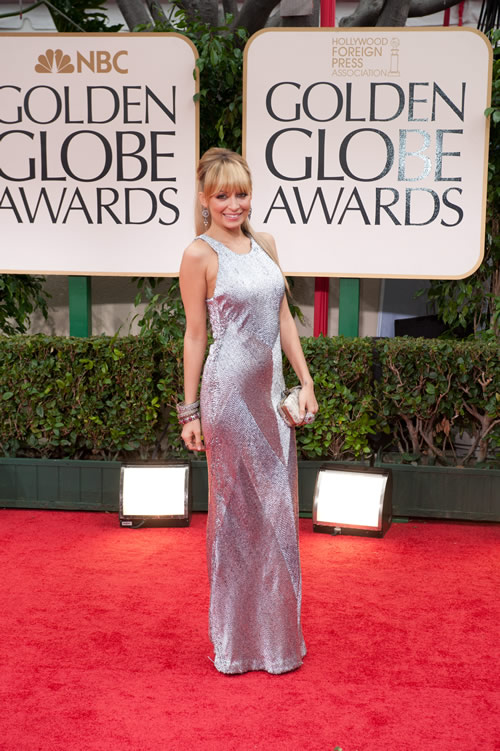 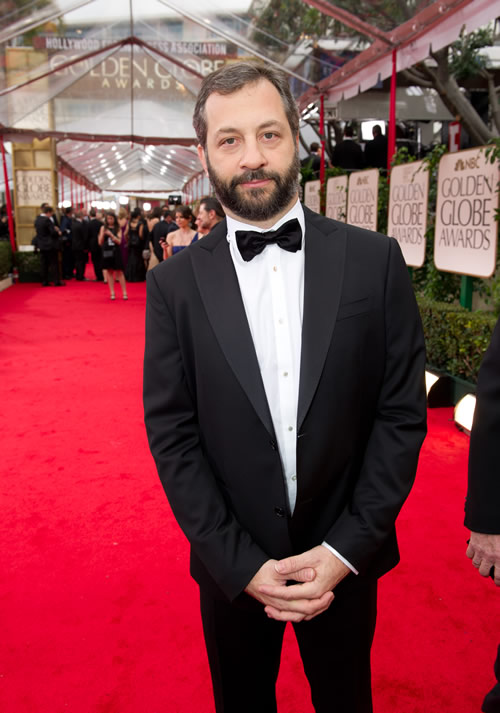 Judd Apatow, one of the producers of Best Picture – Comedy or Musical nominee Bridesmaids, attends the 69th Annual Golden Globes Awards at the Beverly Hilton in Beverly Hills, CA on Sunday, Jan. 15, 2012. Bridesmaids, starring Kristen Wiig and Maya Rudolph, was one of the year’s biggest hits.

Apatow recently made headlines because of his telling off Jerry Lewis at the Critics’ Choice Awards ceremony last week. Bridesmaids failed to win any Golden Globes, though presenters talked a lot about the film’s scene featuring defecation in a sink. Among Apatow’s movies as a producer are the Apatow-directed Knocked Up, with Paul Rudd, Katherine Heigl, Seth Rogen, and Leslie Mann; Nicholas Stoller’s Forgetting Sarah Marshall, with Kristen Bell, Jason Segel, and Mila Kunis; and the Apatow-directed Funny People, with Seth Rogen, Leslie Mann, Adam Sandler, and Eric Bana.