A low-budget release that seems to have been set in an alternate universe, Love Finds Andy Hardy – toplining youthful, All-American lovebirds-to-be Mickey Rooney and Judy Garland – helped to solidify the popularity of the Andy Hardy series, which had begun the previous year with Seitz’s A Family Affair.

Less prone to give you nightmares is TCM’s Christmas Night Sherlock Holmes series, including A Study in Terror (1965) with John Neville, and the little-seen (and for a while considered lost) Sherlock Holmes’ Fatal Hour (1931) with Arthur Wontner.

Never heard of Arthur Wontner? Me neither. But perhaps it’s time we did. 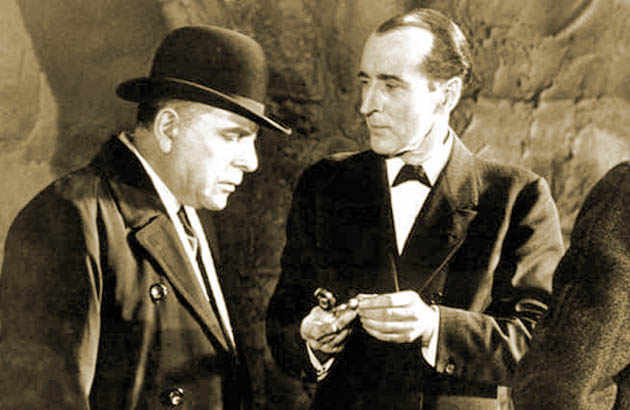 After playing Harry Blyth’s pipe-smoking detective Sexton Blake in London in 1930, veteran British stage and film actor Arthur Wontner (1875–1960) was cast in no less than five British-made Sherlock Holmes movies between 1931 and 1937:

In 1933, Vincent Starrett wrote the following in his book The Private Life of Sherlock Holmes:

“[Arthur Wontner] has been seen in two pictures, at this writing, in America – The Sleeping Cardinal and The Missing Rembrandt – but presumably there are others in the making. Since [William] Gillette there has been no such Sherlock on the stage or screen. For two hours, in a darkened theater, one almost wavered in one’s allegiance to Gillette.

“Surely no better Sherlock Holmes than Arthur Wontner is likely to be seen and heard in pictures, in our time. Sentimentalized, as is imperative, his detective is the veritable fathomer of Baker Street, in person. The keen, worn, kindly face and quiet, prescient smile are out of the very pages of the book. And the direction of [The Sleeping Cardinal and The Missing Rembrandt filmmaker] Mr. Leslie [S.] Hiscott is notably intelligent. In spite of modernization, the tales ring true – so deft, so unobtrusive are the inevitable symbols of immediacy.”

Once again, whether as entertainment or historical curiosity, The Sleeping Cardinal is not to be missed.

And finally, Christmas cheer or no, here are a couple of early December goodies on TCM: 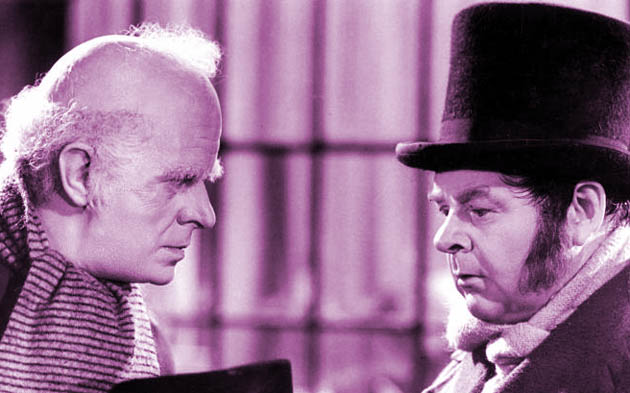 Christmas Cheer? A Christmas Carol with Reginald Owen as Ebenezer Scrooge and Gene Lockhart as Bob Cratchit. Based on Charles Dickens’ 1843 novella about a cheerless miser who discovers the meaning of Christmas Cheer after being visited by three righteous ghosts, MGM’s Edwin L. Marin-directed, Joseph L. Mankiewicz-produced A Christmas Carol (1938) was meant for the studio’s in-house curmudgeon, Lionel Barrymore. Health issues, however, prevented the Best Actor Academy Award winner (A Free Soul, 1930–1931) from taking on the role, which went instead to film and stage veteran Reginald Owen (the 1929 version of The Letter, Queen Christina).

Below is TCM’s classic Christmas Cheer schedule this December 2009. It includes their Yuletide-focused Thursday primetime (up to Dec. 24) and Dec. 25 programming.

Dec. 25 – Christmas Cheer with Sherlock Holmes: “Holmes for the Holidays”

Below are a few other Alt Film Guide articles about movies offering Christmas cheer for all occasions.

Christmas cheer image of Reginald Owen as Ebenezer Scrooge and Gene Lockhart as Bob Cratchit in A Christmas Carol: Metro-Goldwyn-Mayer.

That is a great list. It is still amazing the movies I find on other sites I haven’t seen.

Arthur Wontner has long been the connoisseurs’ Sherlock Holmes, partly because he looked so much like the Sidney Paget drawings in the Strand Magazine. He’s a rather more cuddly personality than the high-strung Holmes of Rathbone and Brett (that i tend to prefer), but he is very good, and even rewrote dialogue to be more true to the character. He also lived long enough and was fan-friendly enough to be honored by the London Sherlock Holmes society late in his life, where he recounted his affection for Holmes.