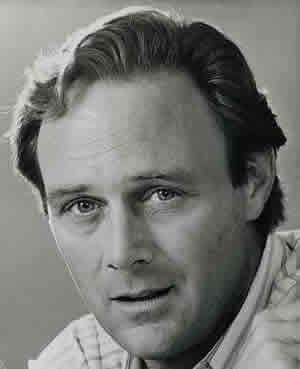 Christopher Cazenove, best remembered for playing Ben Carrington in the television series Dynasty, has died. The 64-year-old actor (66 according to some sources) had fallen ill from septicemia in February.

Cazenove (born Dec. 17, 1943 or 1945, depending on the source, in Winchester, Hampshire) began his acting career – against the wishes of his military father who wanted his son to follow on his footsteps – at the Bristol Old Vic Theatre School. He made his stage debut in Man and Superman at the Phoenix Theatre, Leicester, in 1967.

Among his other stage appearances were those in Hamlet, The Winslow Boy, and Goodbye Fidel.

Cazenove’s first major assignment on British television was that of the clean-cut Lt. Richard Gaunt in the series The Regiment (1972-73), set at the turn of the 19th century.

Other British TV roles, which usually had Cazenove playing aristocrats, included those in Jennie, Lady Randolph Churchill (1974) and The Duchess of Duke Street (1976-77).

He was excellent as Kate Nelligan’s invalid husband in Richard Marquand’s Eye of the Needle (1981), and delivered a flawless performance as a colonialist in 1920s India in James Ivory’s underrated Heat and Dust (1983), co-starring Greta Scacchi as his free-spirited wife and Julie Christie in a parallel story as an Englishwoman in modern India.

As quoted in The Guardian, Cazenove once remarked, “I’m really an awfully uptight sort of person, partly a result of my upbringing. I think I worry terribly about things and I wish I could feel more relaxed socially - and in my work. Which is why I’d really prefer to play character parts. You acquire another personality when you put on false noses or beards.”

It was rather interesting for me to read the post. Thanx for it.