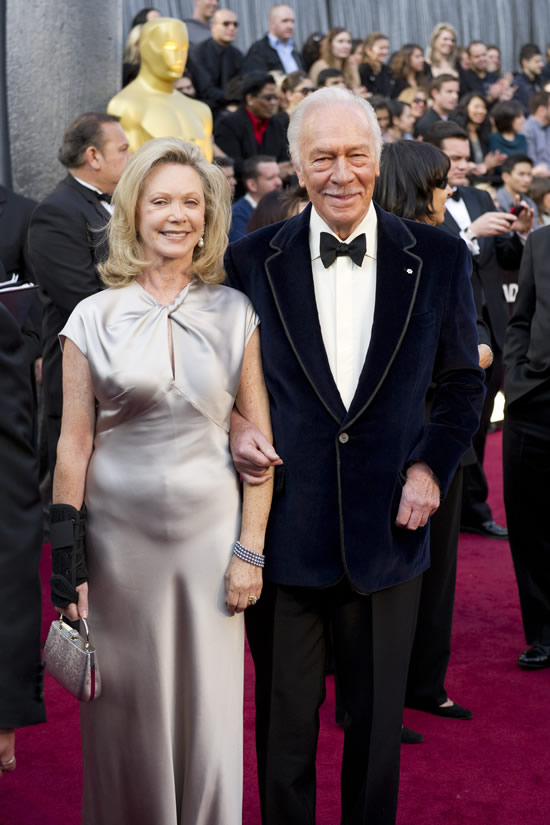 Below is Christopher Plummer’s backstage q&a. The transcript comes courtesy of the Academy of Motion Picture Arts and Sciences:

Q. The obvious question: How does it feel to be the oldest Oscar winner ever?

A. I don’t believe that for a second. I think that Charlie Chaplin, even though it was an honorary Oscar, wasn’t he 83? [Chaplin was a few days short of 83.] I mean, an Honorary Oscar after all is an Oscar, we hope. I’m not sure, but it feels pretty good anyway.

Q. I’m getting married soon, so I would love to talk about your wife. You’re so romantic when you thanked her for rescuing you. What does that mean and tell me about your wife?

A. What do you think it means? I thought it was abundantly clear. Of course, I’m a naughty boy. I’ve been bad all my life, and she always puts me in line. I think it’s great what she’s done. It’s extraordinary. But it doesn’t strike you when you hear the phrase, “She rescues me every day of my life”? What could be clearer?

Q. Good evening. Congratulations, and I’m curious how you look back at awards of any kind, specifically, the two nominations [Plummer’s previous nomination was for The Last Station two years ago] and now the first Oscar win. In terms of a measure of a career, because it’s, obviously, not the reason you do things, but what kind of dessert topping does it put on a distinguished career?

A. That’s absolutely a wonderful phrase. It is a la creme on top, and it’s lovely to be sort of accepted, because you know that beyond the pleasure of working in front of a live audience, particularly, it’s a general acceptance of your work. So it’s thrilling, and I don’t pretend not to poo poo awards, although there’s so many of them, I can’t keep up. I mean, they’re inventing a new one every day.

Q. Mr. Plummer, congratulations. Congratulations, on your role, it was very charming and lovely. And the Academy has a long history of awarding straight actors for gay roles. Do you think there’s a double standard for the public supporting gay actors in real life as opposed to on film?

A. Well, I think of actors as being universally the same, gay or straight. We’re all actors, and a gay actor can play a straight guy beautifully and vice versa. It’s wonderful, because it cancels out all of the sexual differences and all the sort of preconceived misunderstandings of a sexual existence.

Q. Hello, Mr. Plummer, congratulations. I just wanted to ask you, for you, is this a beginning for you tonight and what do you think it’s the beginning of?

A. Well, it is sort of a renewal. It’s not a beginning exactly, but it has recharged me and I hope I can do it for another ten years at least. I’m going to drop dead wherever I am, on stage or on the set. We don’t retire in our profession, thank God.

[Continues on next page. See link below.] 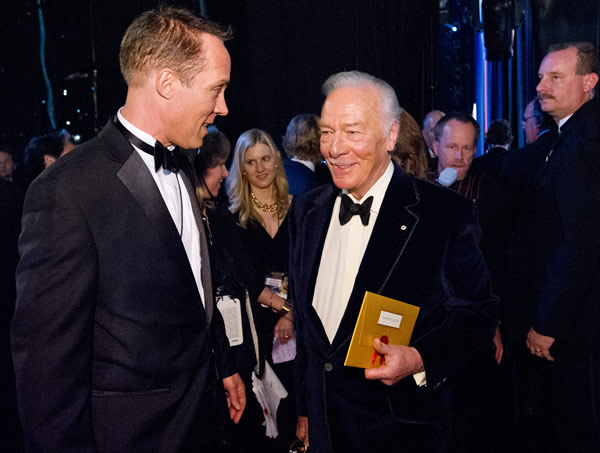 Q. You always do a good job. In your long and illustrious career, who stands out as your favorite actor besides yourself? Who did you look up to?

A. No, not myself. Tons of actors for different reasons. In the French cinema we had when I grew up, I saw a lot of French film because I lived in Quebec. From France, great actors [such as] Pierre Brasseur, Lewis Gilbert [probably a misunderstanding on the part of the transcriber: Plummer was likely referring to Louis Jouvet], and people who are just extraordinary – stage actors, particularly although they did do film. And the great classical actors that inspired me when I was quite young [inaudible], and then later the whole new school of Marlon Brando. I lived through all of those various changes, and they all made their mark upon me, thanks.

Q. I’m so excited. I see you’re wearing your Order of Canada pin. I wanted to know why you decided to wear that tonight?

A. I do because I sort of feel that I’m in a way representing my country here tonight, just as Max [von Sydow] was representing Sweden. And I feel that my country gave me the highest – this is the highest civil honor that a Canadian can get and I’m very proud of it and I think an evening like this deserves to have all the medals and awards showing, so that’s why I did it.

Q. The same year as the Oscar?

A. Yes. [Actually, the same year as the first Oscar ceremony.]

Q. And you won the award for being an old man, at the age of 70. So I wondered if it mattered to have a naked man in your own hands. Are you brave enough to say that you love him?

Q. Can you bring back anything during the war, growing up during the war that gave you so much strength? Canada is so much a part of your life and it was such a strength, you know, [inaudible].

A. Yeah, it was great to grow up in Quebec, particularly, because Quebec never closed. Montreal stayed open 24 hours a day, even jaded New Yorkers would come up and enjoy the night life in Montreal. I’m glad I grew up in a really racy town, and it was marvelous and the cabaret was so important. [Edith] Piaf, [Maurice] Chevalier, we had a young Judy Garland, Frank Sinatra, and you can see these people for nothing, just sitting at a bar and having a beer.

It was a glorious time in Montreal and I was lucky enough to be there. The courage that you talk about was from my mother who was in the first Great War as a nurse, and … she lived through a pretty horrific time. I don’t know if that’s funny to some of you. Oh, there’s two things going on here, all right. Does that answer your question a little bit? 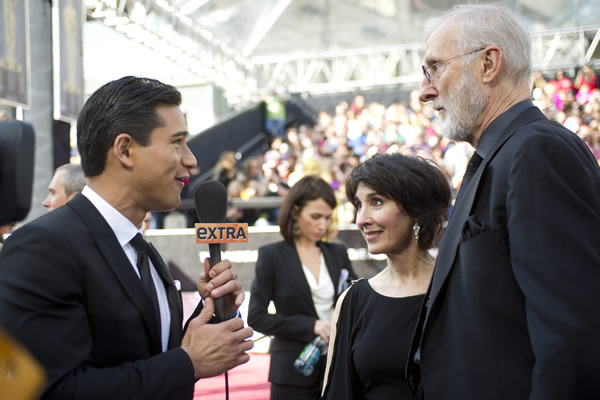 Mario Lopez interviews James Cromwell and guest Anna Stuart at the 84th Academy Awards from Hollywood, on Feb. 26. Cromwell wasn’t nominated for anything this year, but he is one of the featured players in Michel Hazanavicius’ The Artist, which won five Oscars, including Best Picture. Thus, Cromwell got the chance to hop onstage with his fellow cast members, among them Penelope Ann Miller, Bérénice Bejo, and Best Actor winner Jean Dujardin. (Matt Brown / © A.M.P.A.S.)

An animals rights advocate and a Best Supporting Actor Oscar nominee for Chris Noonan’s Babe, Cromwell is also the son of filmmaker John Cromwell and actress Kay Johnson, both of whom were kept quite busy at the dawn of the sound era – the time period in which The Artist is set.

John Cromwell directed three 1929 releases, including two Nancy Carroll musicals, The Dance of Life and Close Harmony. (Much like Bérénice Bejo in The Artist, Carroll became a major star after appearing in light musicals of the late ’20s and early ’30s.) Also at that time, Kay Johnson was starring in two Cecil B. DeMille melodramas, Dynamite in 1929 and the bizarre Madam Satan the following year.

Michelle Williams and Busy Philipps arrive at the 84th Academy Awards from Hollywood, on Feb. 26. Williams was a Best Actress nominee for her portrayal of Marilyn Monroe in Simon Curtis’ My Week with Marilyn. She lost the Oscar to Meryl Streep for her performance as another real-life figure, former British prime minister Margaret Thatcher, in Phyllida Lloyd’s The Iron Lady. (Richard Harbaugh / © A.M.P.A.S.)

Additionally, videos, photos, and interviews will be posted at the 2012 Oscars’ official website. Those usually feature red-carpet, behind-the-scenes, and/or post-Oscarcast interviews. Dave Karger will once again act as the Oscar ceremony 2012’s official red-carpet greeter. (Oscar iPad/iPhone apps can be downloaded here.) More red-carpet videos can be found here.

Now, how to watch the Oscar 2012 ceremony live-streaming online? There’s no Academy-sanctioned live-stream, though several sites such as ustream.tv, tv.com, livestream.com, rentadrone.tv, and Justin.tv may offer user-generated live-streams of the 2012 Oscar ceremony. Bear in mind that those will be of poor quality. You’ll be watching someone else’s TV through a video camera. 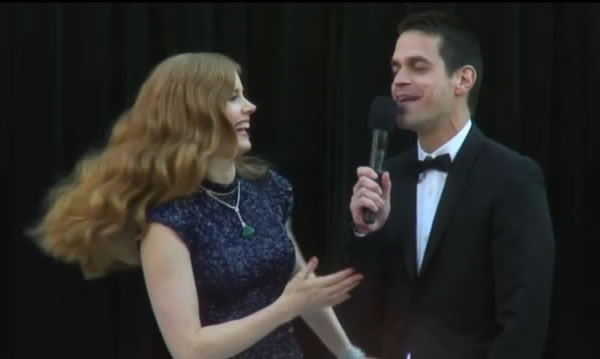 Amy Adams (not about to slap) Dave Karger

Dave Karger will once again be the Oscar ceremony 2012’s official red-carpet greeter. Beginning at 5:30 ET / 2:30 PT, Ryan Seacrest and Giuliana Rancic will be hosting a three-hour Oscar marathon featuring the nominated movies, red-carpet arrivals and perhaps some departures as well. Additionally, E! will have an Oscar Red Carpet Online Livestream in a “companion show” hosted by Ross Matthews and Kristina Guerrero starting at 5:15 p.m. ET / 2:15 PT.

Now, several sites such as ustream.tv, tv.com, livestream.com, rentadrone.tv, and Justin.tv may offer user-generated live-streams of the 2012 Oscar ceremony. Bear in mind that those will be of poor quality. You’ll be watching someone else’s TV through a video camera.