Formerly known as Padre Nuestro (not to be confused with Rodrigo Sepúlveda’s Chilean drama of the same name), screenwriter-director Christopher Zalla’s debut feature Sangre de Mi Sangre (“Blood of My Blood”) received the Grand Jury prize for best narrative feature at the 2007 Sundance Film Festival. More than a year after its win, the Spanish-language drama is finally opening in Los Angeles today.

Set in Brooklyn, Sangre de Mi Sangre follows two young Mexican men who arrive illegally in the United States: one, a con man (Armando Hernández), is fleeing pursuers in a Mexican slum; the other (Jorge Adrián Espíndola) is looking for his long-lost father, the owner of a New York restaurant.

Things, however don’t go quite as planned. The con man steals his pal’s identity, only to discover that the father (Jesús Ochoa) is a mere dishwasher, living in a shabby flat in a downtrodden part of the borough. In the meantime, the real son keeps looking for his father (hence the original title, “Our Father”), relying on the assistance of an untrustworthy American-born junkie (Paola Mendoza).

What follows works on three levels: Sangre de Mi Sangre is thriller, psychological drama, and social commentary all rolled into one. At the core of this scathing look at the ever-elusive American Dream, Zalla offers a study of loss and identity as the undocumented immigrants struggle – often without success – to forge new inner and outer lives for themselves.

Zalla has agreed to answer a few questions (via e-mail) for Alt Film Guide. See below.

Where did you get the idea for the screenplay of Sangre de Mi Sangre?

Little green men dropped through my chimney one night and whispered the whole thing into my ear. No. But really, this is the most difficult question to answer, because it’s so hard how to quantify something as ineffable as the creative process. An experience with Mexican kitchen worker friends here, an image of a pile of money saved there, a desire to make a movie about my City… The creative process for me is just that – a process, or a practice, that you have to cultivate. And then you explore. Really, I think things start to get interesting in narrative once you have a good sense of [the] characters. Then you just throw them in a pot, stir, and see what cooks up. 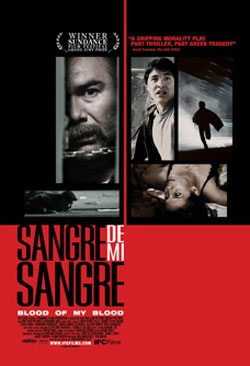 How difficult was it to raise money for the production of Sangre de Mi Sangre, which is hardly like your average feel-good Hollywood movie? Was U.S. distribution a consequence of the Sundance win?

Well, we didn’t get bought during the festival, but we did after, so I suppose you could say the Sundance win had something to do with it. Or the fact that it’s a movie that really seems to stick in people’s minds and affect them. I’ve been amazed at the total range of reactions people have had to the film. It makes you realize that your job is just to create something, and then put it out there in the world – and then let go of it.

Finding money is never easy in the film business, and when you do find it, it has a habit of disappearing when it comes time for people to write the checks. There are so many people along the way who glom onto the project, and tell you they want to be involved, help you make the movie. But there are precious few who have the balls to put their money where their mouths are. Especially when you are talking about putting it in something that is challenging.

By “challenging” I mean a movie without recognizable faces (for an American audience at least), [in a] foreign language, and “dark.” I didn’t know dark was problematic until we tried to sell the movie. I guess the audiences in the States have been so conditioned by the Hollywood opium that they really do believe now that the function of every movie is to make you feel better about your life, to satisfy you. And then there’s this perfectly American trend of judging a movie based on how much money it makes. I love that. But it is a business, and I do feel good about making money back for my investors, for rewarding them for their risk.

But when you consider the fact that there are so many thousands of scripts out there that never get produced, I guess the process wasn’t so tough.

All four principals – Jorge Adrián Espíndola, Jesús Ochoa (above), Paola Mendoza, Armando Hernández – deliver first-rate performances. How did you go about casting them? What was it like working with them – when the film’s dialogue is almost all in Spanish?

We cast the three Mexican actors [Mendoza was born in Colombia] in Mexico City. For the two boys, especially, I wanted to take people who’d never been in New York, plop them into the city, and then start filming to catch that initial shock I think everyone gets from the city for the first time. So I couldn’t cast them here. The Casting Director in Mexico City (Manuel Teil), is the guy who discovered Diego Luna and Gael García Bernal – and had an amazing body of great actors to put in front of me. There’s a lot of talent down there, which is one of the things that drew me to making the film.

Paola, on the other hand, we found here in the City after looking at about 400 girls. It’s funny, but with all four of the actors, I knew as soon as I saw them. Originally I had wanted to cast non-actors, but I realized very quickly in my search that they just didn’t have the acting chops the material required.

Working with the actors was phenomenal, a dream experience. Even though a couple of them are A-list stars in Mexico, there was no ego, no interest in anything other than diving into the complexity and humanity of their characters – flaws and all. They were also very open to the collorative environment I like to foster. I gave each of them total freedom to change their dialogue so that it would be more natural and comfortable – and I think that’s one reason the film has a real air of authenticity to it, from a performance and language perspective. Some of the best lines in the script weren’t even mine!

Lastly, I can’t talk about the actors without mentioning Jesús Ochoa. I think he gives a truly masterful performance. He has so much gravitas and is truly the anchor of the film. There were so many times where I would forget to even call cut because I would be just sitting there with my mouth open, lost in his reality. 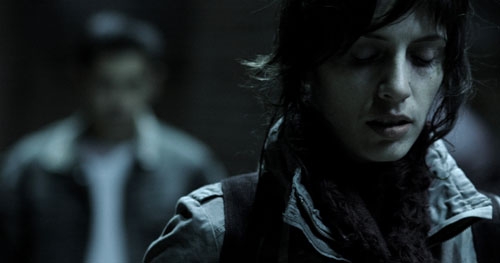 The vision of the American Nightmare depicted in Sangre de Mi Sangre immediately reminded me of Midnight Cowboy – instead of, say, El Norte or Maria Full of Grace. Was I way off the mark?

That’s funny. Midnight Cowboy was one of my central inspirations for the story and I find it really interesting that people basically haven’t seen it. It’s been mentioned here or there, but I guess the fact that the characters are Mexican immediately blind some people to the connection.

I think you are right to draw the distinction on a couple of levels. One, we had no intention of creating a kind of strict realism. Instead, we really wanted to characterize the world, especially New York. I have this kind of fundamental fear of cities (and yet I’ve been living here for 11 years!), and I suppose that really comes out in the film. I think the scariest thing about a place like this is its utter indifference to the individual. How many times do you see someone crying and bleeding on the sidewalk, and yet everyone just walks by?

Juan, the false son, is shown as a highly sexual character. Pedro, on the other hand, is revolted by the kinkiness he finds in the big city – he even bathes and sleeps next to Magda without any hint of sexual yearning. Was that a deliberate choice, to sexualize the “bad” character while desexualizing the “good” one?

No, not deliberate. One of the most amazing things about the process of making a movie is that there are so many variables, so many ways in which life is just going to come in and affect what you are doing. For example, what’s the essence of one actor – as a person – versus another, and how does that translate on screen? But there are so many ways in which things take on a life of their own as the script turns to reality – at every step of the moviemaking process. Rather than impose my iron will on everything, I prefer to be open to whatever these often unexpected influences have. I still get to decide whether or not to include something, but I find the whole process so much more exhilarating when you are willing to listen to what the universe has to offer. That way, I think, the movie really becomes a living thing.

I’ve been to New York City several times, and I’ve visited some dingy parts of town. That said, the Brooklyn captured by Igor Martinovic’s lenses couldn’t have looked either grittier or uglier. What were your and Martinovic’s choices while shooting Sangre de Mi Sangre?

Well, I guess beauty is in the eye of the beholder. I think the filmic look Igor achieved is startlingly beautiful. We talked a lot about Film Noir, not just in the way that it played with shadow and light, but in the way that it really made setting another character. We also talked a lot about creating visual motifs, especially the idea of using obstacles. This is a movie – in a way – about crossing boundaries (geographic, moral, emotional), and so we tried to constantly create visual obstructions for the viewer. Can you enter this space, personally, morally, or does it make you too uncomfortable – will you keep it at arm’s length?

Igor is an incredible talent, and to be able to have the kind of conversations with a collaborator like we had was phenomenal. What he was able to pull off with such a limited budget is mind-blowing. Well, I guess the look of the film speaks for itself.

Sure, lots of new opportunities.