At the end of Giuseppe Tornatore’s Best Foreign Language Film Oscar winner Cinema Paradiso, small-town projectionist Philippe Noiret has died and the Nuovo Cinema Paradiso has become a pile of rubble. The bratty Italian boy Salvatore Cascio has grown into the classy Frenchman Jacques Perrin (like Noiret, dubbed in Italian), a filmmaker who sits to watch a mysterious reel of film the deceased projectionist had left him.

It turns out the reel contains clips from films censored by the prudish local parish priest, whose family values found kisses, embraces, and bare breasts and legs a danger to society. Now, who’s doing all that kissing, embracing, and breast/leg-displaying in that film reel? (Please scroll down for the Cinema Paradiso clip.)

Here are the ones I (more or less) recognize:

(Sorry, the video has been removed.)

The Criterion Collection has posted (via dizzydentfilms) a May 12, 1960, letter in which Ingmar Bergman scolded the Academy of Motion Picture Arts and Sciences for nominating his 1957 drama Wild Strawberries for a Best Original Screenplay Academy Award in 1960. (Wild Strawberries was shown in Los Angeles in 1959.)

Here’s the text of Bergman’s letter, which was displayed at the 2010 Academy exhibit “Ingmar Bergman: Truth and Lies”:

As Smultronstället (Wild Strawberries) didn’t compete for “OSCAR” I think it is wrong to nominate the picture and therefor [sic] I want to return the “CERTIFICATE OF NOMINATION”.

I have found that the “OSCAR” nomination is one for the motion picture art humiliating institution and ask you to be released from the attention of the jury in the future.

It’s unclear why exactly Bergman found the Oscar “for the motion picture art humiliating institution.” Perhaps because he knew – and was none too pleased? – that at the April 4, 1960, ceremony Wild Strawberries had lost the Best Original Screenplay Academy Award to the fluffy Doris Day-Rock Hudson comedy Pillow Talk?

Or perhaps because he felt that any institution that hands out 11 awards, including Best Picture, to something like William Wyler’s Ben-Hur was not to be taken at all seriously?

Either way, Bergman would personally be nominated for eight more Oscars in various categories (Best Picture producer, director, screenplay), and was named the recipient of the Irving G. Thalberg Award in 1971. Additionally, the very year after Bergman wrote his letter, the Academy not only nominated but chose his stark drama The Virgin Spring as the Best Foreign Language Film of 1960. The same would happen the following year, when Through a Glass Darkly won in that same category. The third and last nomination/victory for a Bergman effort in the Best Foreign Language Film category would come 21 years later, when Fanny and Alexander won in early 1983.

For the record: The other Best Original Screenplay nominees of 1959 (at the 1960 ceremony) were the Cary Grant comedy Operation Petticoat, François Truffaut’s The 400 Blows, and Ernest Lehman’s screenplay – a rehash of The 39 Steps – for Alfred Hitchcock’s North by Northwest.)

Also for the record: I’m an admirer of many William Wyler films – e.g., The Letter, The Little Foxes, The Heiress – and I appreciate even his lesser ones. But Ben-Hur, which stars a wooden Charlton Heston in the title role, is his very worst effort that I’ve seen. As far as I’m concerned, despite its wide screen and Technicolor cinematography, it pales in comparison to Fred Niblo’s 1925 silent version starring Ramon Novarro.

I haven’t watched either movie, but the Los Angeles Times’ Kenneth Turan’s warns: The Big Combo‘s “big, dark shadows … will eat you alive.” Sounds like a must-see. Cornel Wilde stars as a cop in pursuit of crime boss Richard Conte; all the while, both cop and criminal vie for the attention of curvaceous blonde Jean Wallace, Wilde’s then real-life wife. (The couple were married 1951-1981.) Also in the Big Combo cast: Robert Middleton, Brian Donlevy, Lee Van Cleef, Helen Walker, and Earl Holliman. Screenplay by Philip Yordan (House of Strangers, Detective Story, Johnny Guitar).

In Pitfall, former Warner Bros. crooner Dick Powell plays an insurance salesman who falls for sultry Lizabeth Scott, whose criminal boyfriend is behind bars. The problems are: a) private detective Raymond Burr wants Scott for himself b) Lost Horizon and Father Knows Best‘s Jane Wyatt is the insurance man’s wife.

I remember once chatting with André De Toth at a party. He didn’t say anything about Pitfall, but he did in no way uncertain terms express his disdain for Alfred Hitchcock. In the video below, he does talk about Powell’s character in the film: a cheating weakling who destroys the lives of those around him. De Toth’s take on the character: “The majority of people are like that. So, I just depicted it as I saw it in the life happening.” (De Toth was Hungarian.)

This film series is presented in collaboration with the UCLA Film & Television Archive and is partly supported by funds from the Hugh M. Hefner Classic American Film Program. Here’s wondering when Hefner will get an Honorary Oscar for his contributions to film preservation. 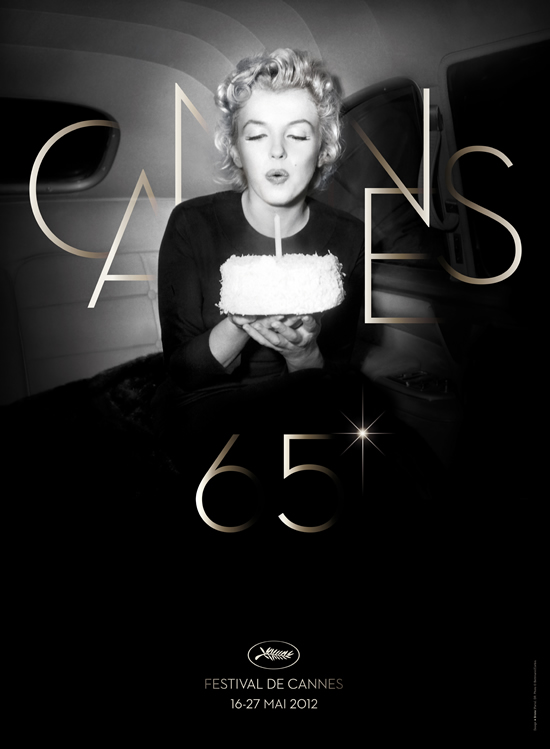 So, on the occasion of their 65th year on this planet, instead of cashing social security checks the Cannes Film Festival is having a youthful Marilyn Monroe blow a candle in their honor. If only other 65-year-olds, regardless of gender, were that lucky. The text below is from the festival’s website.

“Fifty years after her death, Marilyn is still a major figure in world cinema, an eternal icon, whose grace, mystery and power of seduction remain resolutely contemporary.

“Each of her screen appearances sparks the imagination. The Festival poster captures Marilyn by surprise in an intimate moment where myth meets reality – a moving tribute to the anniversary of her passing, which coincides with the Festival anniversary.

“She enchants us with this promising gesture: a seductively blown kiss.

“The Festival is a temple of glamour and Marilyn is its perfect incarnation. Their coming together symbolizes the ideal of simplicity and elegance.”

The 2012 Cannes Film Festival runs May 16-27. Marilyn Monroe, who was – sort of – nominated for an Academy Award this year by way of Michelle Williams in My Week with Marilyn, died on Aug. 5, 1962.

Hugh Martin: ‘Have Yourself a Merry Little Christmas’ Composer