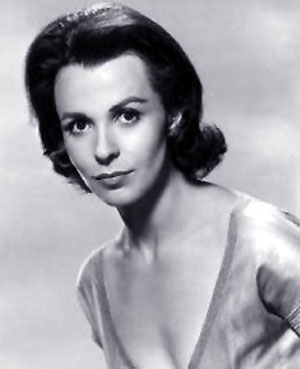 Claire Bloom, one of the most talented and most striking actresses of her generation, will have her “Summer Under the Stars” day on Monday, Aug. 31.

Handpicked by Charles Chaplin to be her young leading lady in the 1952 melodrama Limelight, the British-born Claire Bloom developed into a fantastic actress; one who should have become an international film superstar. That never happened, perhaps because Bloom was more enamored of the stage (A Streetcar Named Desire, The Cherry Orchard, A Doll’s House) than she was of film, and wasn’t as discerning in her film choices as she should have been.

I knew of her, but was mostly unfamiliar with her work until I read her first autobiography, Limelight and After: The Education of an Actress, which candidly discussed her early life in England – including the difficulties faced by a Jewish British family in the ’30s and ’40s – and her working with Chaplin. From there, I made sure I saw every Claire Bloom movie I could get my hands on, from The Man Between and The Brothers Karamazov to Sammy and Rosie Get Laid and Mighty Aphrodite. And while in New York about a decade ago, I got good seats for a restaging of Electra, in which Bloom’s cool and composed Clytemnestra stole the show from Zoë Wanamaker’s fire-spitting fatherless orphan.

Now, having watched a good chunk of Claire Bloom’s films, I can see both why she should have a become a top movie star and why she didn’t. Bloom was (and still is) quite beautiful and she has a strong screen presence, but whoever picked the vast majority of her film roles should be sent to Devil’s Island for all eternity.

Bloom would have been perfect as Maggie the Cat in Cat on a Hot Tin Roof and as the potential lobotomy victim in Suddenly Last Summer, characters that helped to solidify Elizabeth Taylor’s stardom. Bloom would have been just as perfect as Lara in Doctor Zhivago, for she would have brought the sort of maturity and sense of time and place that is sorely lacking from Julie Christie’s much-too-modern performance. (Julie Christie is one of the greatest actresses around, but she was badly miscast in two of her costume forays: Doctor Zhivago and Far from the Madding Crowd.)

Instead of those and other roles for which she was suited, Bloom found herself wasted in the heavy-handed fantasy The Wonderful World of the Brothers Grimm (1962), starring Laurence Harvey and Karl Boehm (above, with Oskar Homolka, Bloom, and Walter Slezak); badly miscast as a tomboyish pirate in Anthony Quinn’s The Buccaneer, opposite Yul Brynner (1958); and once again wasted as Richard Burton’s love interest in Robert Rossen’s dreadful Alexander the Great (1956), an anti-epic whose sole redeeming features are its name cast – in addition to Burton and Bloom, there are Fredric March and Danielle Darrieux – and the fact that as awful as it is, it’s still not as disastrous as Oliver Stone’s Alexander.

On the bright side, Bloom looks incredible – though she has little to do – in Carol Reed’s attempt to reprise his The Third Man success, The Man Between (1952); she is fine in a small role as the Lady Anne in Laurence Olivier’s filmed teleplay Richard III (1956); and she manages to survive along with Maria Schell the acting carnage in Richard Brooks’ misguided adaptation of The Brothers Karamazov (1958), in which Yul Brynner and Lee J. Cobb go on a rampage devouring sets, costumes, props, and even their fellow actors. (See a pre-Star Trek William Shatner being gobbled up whole in a small role.)

Additionally, Bloom is excellent in Robert Wise’s The Haunting (right, 1963), one of the eeriest horror movies ever made. As a lesbian a little infatuated with Julie Harris’ sexually repressed spinster, Bloom would have stolen the show if it weren’t for the fact that Harris is nothing short of superb as the embodiment of that ancient Babylonian equation: Lack of Sex = Madness + Death.

And finally, her performance as Richard Burton’s companion in Martin Ritt’s sober, downbeat The Spy Who Came in from the Cold (1965) is simply masterful. Burton deservedly earned an Academy Award nomination for his anti-Bond spy; Bloom should have gotten a nod as well.

With the exception of Limelight and The Buccaneer, all of the aforementioned films are part of Turner Classic Movies’ Claire Bloom Day, which includes two TCM premieres: 80,000 Suspects (1963) and A Severed Head (1970).

Written and directed by Val Guest, best known for stuff like The Abominable Snowman and When Dinosaurs Ruled the Earth, the obscure 80,000 Suspects is a drama about a doctor (Richard Johnson), his wife (Bloom), and lots of potential smallpox victims in an English town. The film is based on Elleston Trevor’s 1957 novel The Pillars of Midnight, which may owe more than a little something to Albert Camus’ The Plague.

I have high hopes for A Severed Head, which Frederic Raphael adapted from Iris Murdoch and J. B. Priestley’s play (in turn based on Murdoch’s novel) about switching London couples. Dick Clement, best known for his screenplays (among them Flushed Away and Across the Universe) directed. Also in the classy cast: Lee Remick and Richard Attenborough.

By the way, Bloom’s second book of memoirs, Leaving a Doll’s House, in which she bluntly talks about her film career and her relationships with several men – from an adulterous liaison with Richard Burton to her marriages to the likes of Rod Steiger and Philip Roth – is a must-read.

And thus ends the 2009 edition of TCM’s “Summer Under the Stars” series.

7:30 AM The Brothers Karamazov (1958)
In this adaptation of the Dostoevsky classic, four brothers fight to adjust to the death of their domineering father. Cast: Yul Brynner, Maria Schell, William Shatner. Director: Richard Brooks. Color. 146 min.

5:00 PM The  Spy Who Came in from the Cold (1965)
A British agent infiltrates the enemy by allowing himself to be disgraced at home. Cast: Richard Burton, Claire Bloom, Oskar Werner. Director: Martin Ritt. Black and white. 112 min.

7:00 PM The Haunting (1963)
A team of psychic investigators moves into a haunted house that destroys all who live there. Cast: Julie Harris, Claire Bloom, Russ Tamblyn. Director: Robert Wise. Black and white. 112 min.

1:15 AM A Severed Head (1971)
When a woman leaves her husband for his best friend, it triggers a series of romantic unions and breakups. Cast: Lee Remick, Richard Attenborough, Claire Bloom. Director: Dick Clement. Color. 98 min.

I agree that Julie Christie was imperfect as Lara in Doctor Zhivago, a bit too callow at that point in her career and styled and made-up in too modern a fashion - but her absolutely stunningly photographed beauty did go a long way in making up for those factors. Claire Bloom, while a lovely and talented actress, I’m afraid would simply have been too old at that time to be a convincing Lara, who begins the film as a schoolgirl.

Ms. Bloom is one of the best actresses I’ve ever seen.

My favorite (movie w/her starring) is being shown tonight on TCM: The Haunting.

The whole thing hits me so hard every time I see it, and I thank the ladies for that.

The remakes are limpid.

“Look, I know the supernatural is something that’s not supposed to happen, but it does happen.”

And other things that aren’t supposed to happen, happen, as well…

Came across your site and noticed you’re a Katharine H. fan, kindly head over to my site and take part in the polls for best KH films and performances…