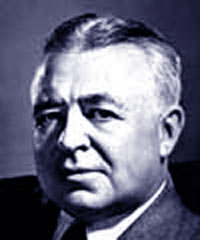 Jack Neely’s “The Forgotten Director: Who was Clarence Brown?” at Metro Pulse:

“Dr. Gwenda Young, a film-studies professor at University College Cork, came across [Clarence] Brown by an unlikely route. Her Ph.D. thesis was about Jacques Tourneur, the French director of cult classics like Cat People and I Walked With a Zombie. ‘My first chapter was an exploration of Jacques’ relationship with his father, Maurice Tourneur,’ one of the early masters of silent film. ‘Brown was Maurice’s editor and protege, and he always said that he viewed Tourneur as his mentor, even his “god”!’ Of Tourneur’s assistants, Clarence Brown was the only one who had a significant career on his own, so Young looked further into his oeuvre. With that came a surprise. ‘I sought out some of his films, and then realized that I had actually seen some of them, and that they’d been childhood favorites. Mainly it was National Velvet and The Yearling … I saw them when I was a horse-mad, animal-mad girl, and just loved them.’

“Those may still be the Clarence Brown films most often seen by audiences in America, big MGM classics of the sound era. But film scholars may be more likely to talk about Brown’s earlier films, especially his silents.

“’The more films I saw by Brown, the more I was impressed with him, especially by his visual style and his subtlety,’ she says. ‘I really do think Brown was one of the great silent film directors, in the sense that he really doesn’t need dialogue. It’s all there in the evocative lighting, the camera work, and the often understated performances of his actors.'”

Gwenda Young is currently (March 2008) working on a biography of Clarence Brown. According to Neely’s article, the University Press of Kentucky will publish the book.

As is the case of most directors of the studio era (e.g., Jack Conway, Edmund Goulding, Michael Curtiz), he lacked a distinctive visual or thematic style. In other words: No auteur; no nothing. Compounding matters (as far as most film historians are concerned), Brown’s films usually focused on women – mainly Greta Garbo, Joan Crawford, and Norma Shearer – and their issues.

That’s unfortunate, as Brown – though not one of my favorite filmmakers – did display a remarkable visual flair and technical virtuosity in most of his films that I’ve seen. (I particularly recall a striking camera slide over a banquet table in The Eagle; also, both The Human Comedy and The Yearling are visually stunning, the former shot in black and white by Harry Stradling, the latter shot in color by Charles Rosher, Leonard Smith, and Arthur E. Arling.)

My problem with Brown’s films is that many of them tend to be heavy-handed and ponderous. Part of reason for that are the stories/screenplays themselves, which are usually overloaded with a Message (e.g., Anna Christie [above], The Gorgeous Hussy, The Human Comedy); the studio for which he worked most frequently, MGM, whose motto was More Bloatedness Than There Is in Heaven; and, quite likely, Brown’s own sense of pacing.

That said, Brown could be a highly effective actors’ director. Say what?

Well, true – Greta Garbo is horrendous in Anna Christie and unintentionally funny in Romance, and both Norma Shearer and Lionel Barrymore deliver godawful performances in A Free Soul. Even the usually great Marie Dressler is embarrassingly bad in Emma.

However, Brown did elicit excellent performances in many of his lesser-known films: Laura La Plante is superb in the ultra-rare Butterfly (1924), as the flapperest of all flappers; Garbo and John Gilbert are quite good in the romantic melodrama A Woman of Affairs (1928); Harry Carey is outstanding as a nasty villain in Trail of ’98 (1928); and Norma Shearer (left, with Clark Gable) is delightful doing her Garbo impersonation in Idiot’s Delight (1939).

Also, Irene Dunne is touching in the all-for-the-war-effort The White Cliffs of Dover (1944); and Gregory Peck, Jane Wyman, and Claude Jarman, Jr. are fully believable in The Yearling (1946).

I always think of Clarence Brown as the romantic image of the innovative director who invented the pull-back shot and in Anna Karenina he tracks back over a dining table.
I should really look at him again for shot structure and how and when he cuts to close ups.

Hello Andre Soares and all contributors,
Interested to read this exchange on Brown. I agree- his work is uneven (as with most Hollywood directors of the studio era) but when he is good, he really IS good. I’ve seen 51 of his 53 films as director (two are ‘lost films’) and there are certainly some ‘dogs’ but there are many, many examples of very fine, imaginative filmmaking even in films that are routine, plot wise. Brown himself is interesting- complex and much more thoughtful, full of contradictions. Hopefully, I will be able to convey this and the power of many of his films, in the book.
Btw, I liked Andre Soares’ book on Novarro…
Regards
Gwenda Young

I too, disagree with your assessment of Clarence Brown as hving no visual style, no auteur, etc…

Actually, there were many times in my studies of classic film where I’d be discovering a “new” old film on TCM or having checked out a half-dozen films starring an actor of interest, and I’d think, “This is a visually extraordinary scene” because of the camera’s virtuosity, or use of visual metaphor to convey the emotions of the scene, and mostly because it is a unique or unusual set-up, and lo, it will be a Clarence Brown film. This occurred while viewing the early “Possessed” with Joan Crawford (you know, the scene in the train-yard as the cars go by, presenting a moving vignette of life in each of the windows), and during Anna Karenina with that incredible shot of the banquet; not to mention moments in “Chained” (the ranch scenes), “The Rains Came” (the raging waters as allegory to Loy’s pull on Power’s good doctor), and “Wife vs Secretary” (besides the beautiful, understated performance of Jean Harlow denying her attraction, yet demonstrating it with every action, take a look at the phone booth scene, the dinners at the young boyfriend’s house, the hotel room in Havana) where the emotions from despair to deep love virtually transcend mere script and screen. Borzage was able to do this, as was McCarey and La Cava.

Maybe it’s a gender thing. Women tend to “feel” and appreciate this sort of magic more than the intended thrill that action and battle scenes offer. Some men often find any classic film’s romance scenes “heavy handed” and sappy. And granted many are. But compare the majority of Brown’s with Wyler’s “Wuthering Heights” or Capra’s “Meet John Doe.” THOSE are heavy-handed and usually without the visual interest and creativity that Clarence Brown gives us.

I almost forgot… How great is the set-up in “They Met in Bombay” with Russell’s “Lady Anya” readying herself for the evening’s con, and Gable having picked up her scent. The first 15 minutes has very little dialogue and is shot with dual POV’s, and very effective.

Thanks for writing, but …

You didn’t see this at the start of my fourth paragraph?

“That’s unfortunate, as Brown — though not one of my favorite filmmakers — did display a remarkable visual flair and technical virtuosity in most of his films that I’ve seen.”

I’m a student of Gwenda Young’s in Final Year Arts, UCC, and in our silent cinema seminar we’ve just started to look at Brown’s films. Watched Smouldering Flowers last week, Flesh and the Devil tomorrow. He’s certainly a fascinating director and I look forward to delving further into his work.
I also look forward to the publication of Gwenda’s book; if it’s anything like her classes it’ll be both entertaining and informative. :)

I came across this article while researching Brown’s film, INTRUDER IN THE DUST.

I found your comments “he lacked a distinctive visual or thematic style. In other words: No auteur; no nothing. Compounding matters, Brown’s films usually focused on women — mainly Greta Garbo, Joan Crawford, and Norma Shearer — and their issues” ignorant, short-sighted and incredibly sexist. There was nothing show-offy about Brown;s style — it served the story, instead of being a showcase for “visual style.” After seeing INTRUDER IN THE DUST, Faulkner himself commented, “I like the way Mr. Brown used bird calls and saddle squeaks and footsteps in place of a lot of loud music telling you what emotion you should be experiencing.”

As for your implication that films about women and their problems are inherently less valuable, that says more about you than about Brown. It also shows your ignorance about Brown’s body of work and his versatility.

But… how could you have gotten it all wrong?

Did you bother reading the follow-up paragraph to the one you quote in your comment? Did you read the previous paragraph?

Wasn’t it obvious that I’m pointing out that *film historians* are the ones who tend to be short-sighted and sexist — and that that’s why Clarence Brown’s work isn’t well-remembered today? Didn’t you read my paragraph praising some of Brown’s work with actors?

By the way, I’ve seen 25 of Clarence Brown’s 50 or so films. That gives me a pretty good idea of the kind of director he was and the types of films he made. I’m hardly “ignorant” when it comes to Brown’s career, even if my assessment of it may not match yours.

His two silents with Garbo “Flesh and the Devil” and “Woman of Affairs” are absolutely remarquable both in terms of cinematic images and unfrogettable performances by the leads. Garbo changes the image of women on films presenting a passionate, strong, independent, intelligent and powerful image and I believe that Brown was a powerful factor in detecting her extraordinary qualities on film. Her performance in “Woman of Affairs” is in my opinion insurpassable especially the scene where she lies ill at the hospital and emerges from her room in a frantic search of the bouquet of roses rent to her by her lover portrayed by Gilbert. I do not share the opinion presented in this article “Garbo horrendous in Anna Christie etc”. I think Brown did more than an honest job in brigning to life O’Neil’s play (almost impossible to adapt for the screen) and Garbo has wonderful moments in that film (we should not forget that this was her first talkie) as well as Marie Dressler. And thanks to Brown’s direction she delivered the definitive Anna Karenina in 1935.

I’m not a big fan of “Flesh and the Devil,” but I did like “The Rains Came.”
I also like the uneven “Idiot’s Delight.” Some moments in the film are excellent.