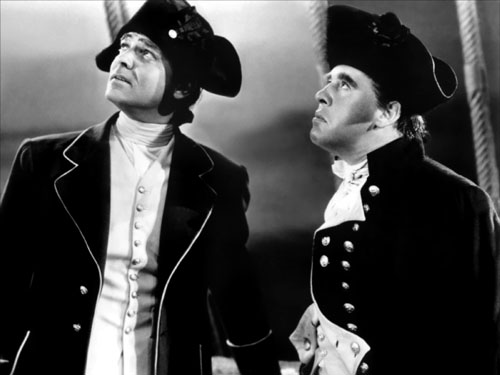 Clark Gable in Mutiny on the Bounty, with Charles Laughton.

Clark Gable has his “Summer Under the Stars” day on Wednesday, Aug. 12.

Turner Classic Movies will present thirteen of the actor’s films, all of which have been shown before. Come to think of it, I’m not even sure what a rare Clark Gable movie would be, unless one includes the pre-1931 films in which Gable was an extra. Else, I believe that just about every single one of those films in which he starred or had supporting roles have been shown either on TCM or elsewhere a number of times – something that’s quite unusual.

Now, the King of Hollywood would never have risen to the throne had I had any say in the matter, but I didn’t. Lots of other people, however, did. Gable was a top box office draw for more than two decades, and remained highly popular until his death in 1960 at age 59. Strangely, unlike other tough male superstars of the era such as Humphrey Bogart and John Wayne, Gable’s wattage has dimmed somewhat with the passing of the years. I can’t quite understand why that’s happened, considering that his cockiness and macho posing remain a fixture of today’s male movie stars, so I won’t even hazard a guess.

Also, check out Gable’s African adventures: Jean Harlow steals the show in Red Dust and so does Ava Gardner (right) in the remake, Mogambo.

After Grand Hotel and Dinner at Eight, movie critics, historians, audiences must have wondered whether MGM would be churning out at least one all-star picture per year. Those hoping for such treats must have been sorely disappointed, even though from the mid-1930s onwards Hollywood studios loosened up their “certified star” rules so that more and more actors found themselves billed above the title. But mostly no more than two or three at a time.

Case in point: Manhattan Melodrama (1934), which, along with The Thin Man (also 1934), helped to turn William Powell and Myrna Loy as first-rank stars and a popular big-screen team.

You forgot to mention his ears. They looked bigger when he didn’t have his mustache on.