Classic Christmas movies on TCM: The return of Barbara Stanwyck & Fred MacMurray in ‘Remember the Night’

As usual, classic Christmas movies hold a prominent place on TCM’s December schedule. What’s unusual this year is that one of them is the digitally restored version of Paramount’s 1940 romantic comedy/drama Remember the Night, directed by Mitchell Leisen, and starring Barbara Stanwyck and Fred MacMurray.

Written by Preston Sturges – who made his directorial debut that same year with The Great McGinty – the story revolves around a New York City assistant D.A. (Fred MacMurray) who falls in love with a shoplifter (Barbara Stanwyck) during the Christmas court recess, which the odd couple spend in the so-called American Heartland (in this particular case, Indiana).

As found in Preston Sturges by Preston Sturges: His Life in His Words, this is what the screenwriter had to say about the relationship between his two disparate lead characters – a dynamic Mitchell Leisen felt the need to alter so as to place a stronger focus on Barbara Stanwyck (the much bigger star and the much superior performer):

“In Rain, for instance, the preacher started to reform [the girl] and ended up laying her like a carpet. In Resurrection, he got the erection first and hit the trail much later. In Remember the Night, love reformed her and corrupted him, which gave us the finely balanced moral that one man’s meat is another man’s poison, or caveat emptor. As it turned out, the picture had quite a lot of schmaltz, a good dose of schmerz and just enough schmutz to make it box office.”

TCM will be offering all that good old-fashioned schmaltz, schmerz, and schmutz several times throughout the month, including Christmas Eve at 8 p.m. EST.

“It’s one of those quirky twists of fate that a film as exceptional as Remember the Night has been so overlooked when it comes to great Christmas movies,” TCM host Robert Osborne is quoted as saying in the press release for the film. “It’s our hope at TCM that our special Christmas Eve showing of this holiday gem, now fully remastered, will help give it a much-deserved new life.”

Prior to this restoration of Remember the Night, which is currently available on DVD, the Mitchell Leisen-Preston Sturges collaboration had received only a brief home video release back in the VHS era.

Of course, if the powers-that-be at Universal made sure that the old movies found in their library (including most Paramount releases from the dawn of the sound era to the late 1940s) were available for viewing, we wouldn’t have as much of a problem when it comes to overlooked “exceptional” Hollywood films. But enough carping.

Remember the Night – which, strangely for a Christmas movie, opened in January 1940 – marked the first of four Barbara Stanwyck and Fred MacMurray pairings. The ensuing three were:

Besides Stanwyck and MacMurray, the Remember the Night cast includes:

A few more credits: cinematography by the underrated Ted Tetzlaff[2], music by Friedrich Hollaender, and editing by Doane Harrison.

And for the record, Henry King’s Remember the Day (1941) is not a Day After sequel to Remember the Night. Instead, the 20th Century Fox romantic drama starring Claudette Colbert and John Payne is based on a play by Phillip Dunning and Philo Higley. 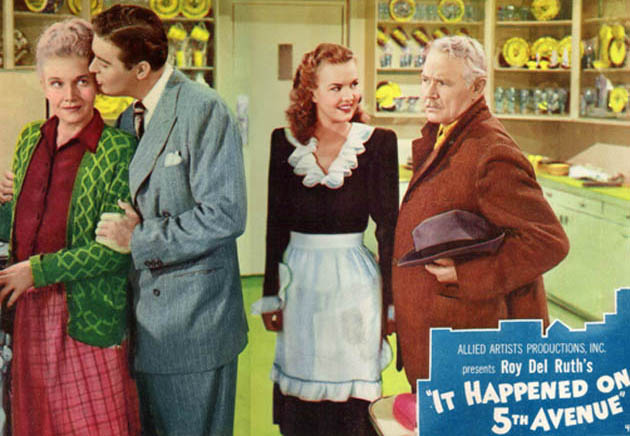 Classic Christmas movies: It Happened on Fifth Avenue with Ann Harding, Don DeFore, Gale Storm, and Victor Moore. This New York-set, feel-good Christmas release about the virtue of charity sounds like the antithesis of Luis Buñuel’s Viridiana, a dark satire that got the filmmaker in serious trouble with the Spanish Catholic Church and its allies in Gen. Francisco Franco’s fascist government. Hardly the sort of movie intent on outraging anyone, It Happened on Fifth Avenue lost the 1947 Best Original Story Oscar to another Christmas-themed tale with a New York City address: George Seaton’s Miracle on 34th Street.

‘It Happened on Fifth Avenue’

Although Remember the Night is TCM’s indisputable highlight among its classic Christmas movies, there are other goodies – and potential goodies – as well.

Is charity a virtue?

Everett Freeman’s screenplay (from an “original story” by Herbert Clyde Lewis and Frederick Stephani, with additional dialogue by Vick Knight), centers on a hobo (Victor Moore) and his buddies (homeless ex-G.I. Don DeFore among them), who take over a New York City mansion while its wealthy owner (Charles Ruggles) is away during the Christmas holiday.

Romance and all-around kindness ensue in this feel-good release that – in terms of tone and messaging – sounds like the polar opposite of Luis Buñuel’s similarly themed Viridiana (1961), a “sacrilegious,” Palme d’Or co-winning[3] dark satire about the virtue of charity that got the filmmaker in some deep trouble with Spain’s Catholic Church and its cohorts in Gen. Francisco Franco’s right-wing regime.

Members of the Academy of Motion Picture Arts and Sciences apparently found no reason to be offended by It Happened on Fifth Avenue, which was shortlisted for the Best Original Story Academy Award.

The Allied Artists release was likely a surprise nominee, as during the studio era relatively few movies not put out by the Hollywood majors and near-majors managed to get included in the Oscars’ top categories.

Curiously, the winner that year was another New York-set Christmas-themed entry, George Seaton’s better-remembered – and more widely available – Miracle on 34th Street, with the original story credit going to Valentine Davies. (Seaton was credited for the final, Oscar-winning screenplay.)

Some prefer it to Metro-Goldwyn-Mayer’s more opulent 1949 version, directed by Mervyn LeRoy and starring June Allyson in the old Hepburn role. In this movie watcher’s view, superior to both is Gillian Armstrong’s 1994 film – Winona Ryder’s central miscasting notwithstanding.

Regarding the 1933 version, in spite of its undeniable Christmasy atmosphere, the film feels a bit too precious and much too sentimental. Never mind the fact that this generally well-regarded box office hit earned Victor Heerman and Sarah Y. Mason the 1932–1933 Academy Award for Best Adapted Screenplay, and Katharine Hepburn the Best Actress award at the 1934 Venice Film Festival. 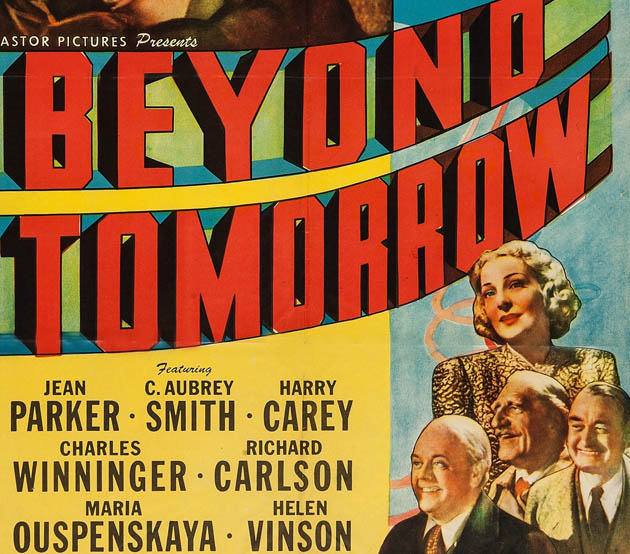 Irrespective of the presence of hard-hitting types such as Remember the Night‘s Barbara Stanwyck and The Maltese Falcon‘s Sydney Greenstreet, Peter Godfrey’s Christmas in Connecticut (1945) is one of those “feel-good” classic Christmas movies that make this viewer despair over the demise of classic Rome’s festive Saturnalia traditions.

On the other hand, A. Edward Sutherland’s little-known Beyond Tomorrow (1940) sounds like it could be interesting, even if only for its cast of scene-stealers. 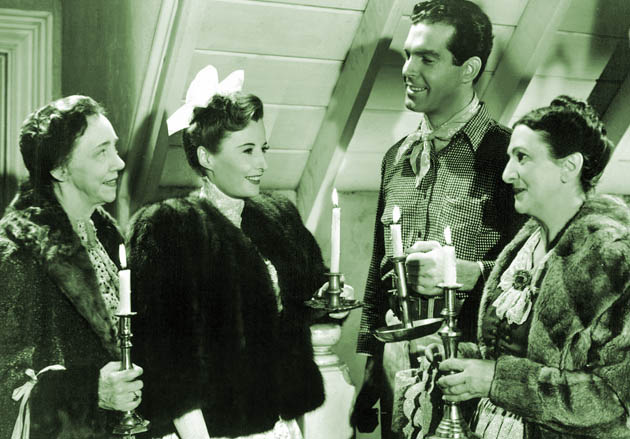 Classic Christmas Movies: Remember the Night with Beulah Bondi, Barbara Stanwyck, Fred MacMurray, and Elizabeth Patterson. Standing next to son MacMurray, stage actress Beulah Bondi came to Hollywood to be featured in Samuel Goldwyn’s 1931 film adaptation of the play Street Scene; she would remain busy in front of the camera well into the 1970s. (Bondi was last seen in the TV series The Waltons.) Elizabeth Patterson, standing next to Stanwyck (dressed just like your average shoplifter) was another stage actress who later in life became a favorite film Mom, Auntie, etc. Remember the Night is one of TCM’s “overlooked” classic Christmas movies.

Until, that is, Mom – like countless other movie Moms before her – realizes that “the girl” may be a danger to her beloved son’s career.

Elsewhere, among Bondi’s numerous movie children, grandchildren, and nephews and nieces are the following:

In addition, Beulah Bondi was “Granny” to Zachary Scott, Betty Field, and their children in Jean Renoir’s The Southerner, while Madeleine Carroll (The Case Against Mrs. Ames), Fay Bainter (Make Way for Tomorrow), and Diana Dors (The Unholy Wife) were three of her daughters-in-law.

[2]The remastered edition of Remember the Night – once again, in Robert Osborne’s words, one of Hollywood’s “overlooked” classic Christmas movies – is supposed to have restored the luster of Ted Tetzlaff’s black-and-white cinematography.

The Los Angeles-born Tetzlaff (1903–1995), for his part, is definitely one of Hollywood’s overlooked classic cinematographers for all occasions. Even among cinema connoisseurs his name doesn’t have nearly as much weight as those of, for instance, Gregg Toland, Stanley Cortez, or James Wong Howe.

Yet Tetzlaff’s cinematography credits over a two-decade period (1926–1946), initially at Columbia and later mostly at Paramount, include:

Surprisingly, Ted Tetzlaff was shortlisted for only one Academy Award, for The Talk of the Town (Best Cinematography – Black and White).

He later became a director, most notably of the classic low-budget noir The Window (1949), in which 9-year-old Bobby Driscoll witnesses a murder, but no one believes him.

Will you please tell me when you will be presenting ” A Star In The Night” this Christmas? I love that film. I believe that it must be a Short subject.