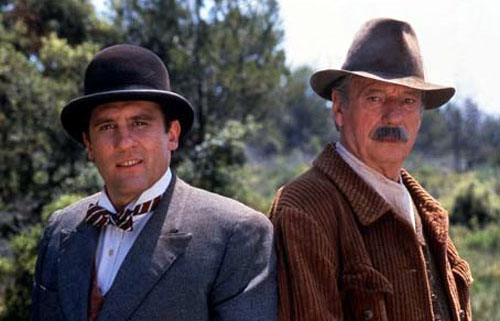 Filmmaker Claude Berri, best known internationally for Jean de Florette (1988) and its sequel, Manon of the Spring (1989), died Jan. 12 after suffering a stroke. Berri was directing his 20th film, Trésor, when he fell ill. He was 74.

Beginning in the early 1950s, Berri worked as an actor, director, writer, and producer. He was never a big name in front of the cameras, but in the other three capacities he became one of the most important and influential figures in French cinema.

Generally speaking, I’m not a fan of film adaptations of Marcel Pagnol’s works as I tend to find them interminable. Pagnol himself, in fact, was guilty of making never-ending films in the 1930s and 1940s – even the good ones like The Well-Digger’s Daughter could have been a good 20 minutes shorter. Unfortunately, as far as I’m concerned both Jean de Florette and Manon of the Spring fit that mold.

Of the few Berri-directed films I’ve seen, my favorite by far is the 1966 drama Le Viel homme et l’enfant / The Two of Us, which stars veteran Michel Simon as an old country grouch who also happens to be an anti-Semitic bigot. So what happens? A little Jewish boy is brought to the family farm to hide from the Nazis. One doesn’t need a crystal ball to know that the old man will be taught a lesson in humanity somewhere along the way.

What’s most remarkable about The Two of Us – next to Michel Simon’s marvelous performance – is that the film is completely devoid of phony sentimentality. Had it been a Hollywood movie, it most likely would have been unwatchable. Instead of the Steven Spielberg approach, however, Berri tells his story quietly and unobtrusively – and it is his story, as the film was inspired by Berri’s own childhood. (Berri was born in Paris on July 1, 1934; his real name was Claude Langmann.)

According to a spokesperson, Trésor will move forward.