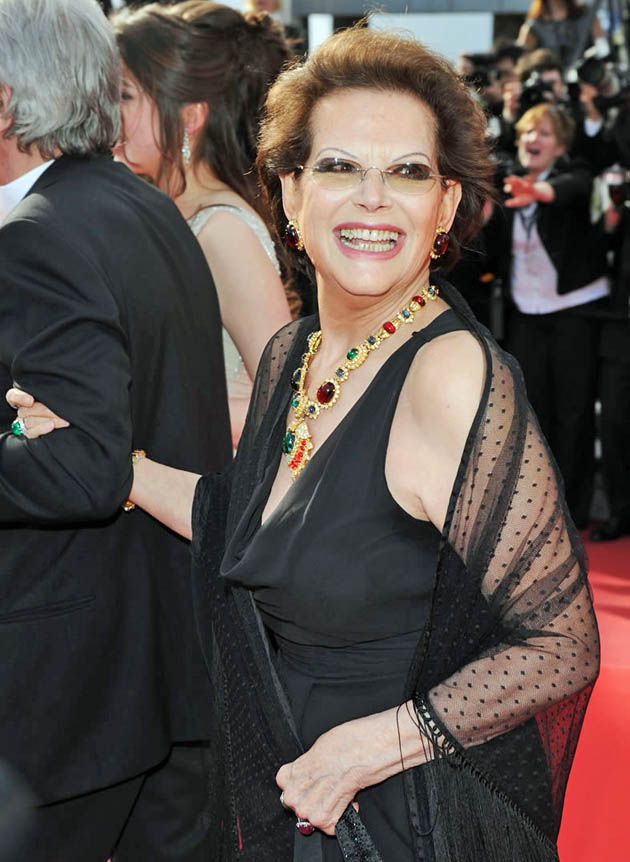 Claudia Cardinale arrives at the premiere of the new restoration of Luchino Visconti’s 1963 Palme d’Or winner The Leopard / Il Gattopardo, held at the Palais des Festivals on May 14, during the 2010 Cannes Film Festival.

Other Luchino Visconti films include:

Besides her collaborations with Luchino Visconti, Claudia Cardinale has been featured in about 90 films. Among them:

According to the IMDb, Claudia Cardinale currently has three films in post-production: 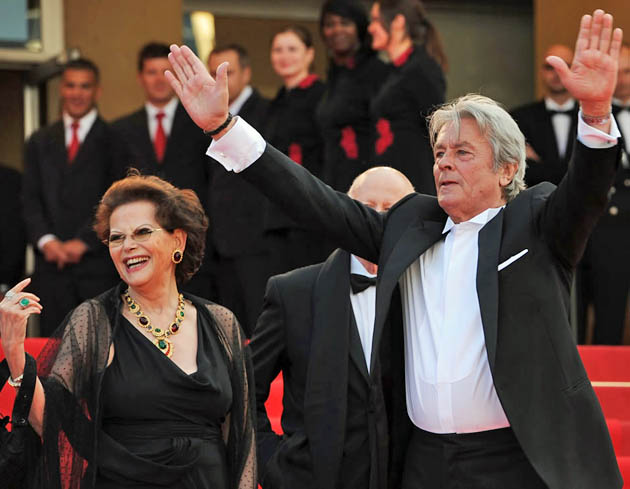 Pictured above are Claudia Cardinale, Alain Delon, and Cannes Film Festival President Gilles Jacob (mostly hidden behind Delon’s outstretched arms) at the premiere of the newly restored The Leopard.

Besides his collaborations with Luchino Visconti, Alain Delon has been featured in more than 80 films since the late ’50s. Among them:

Alain Delon is seen above with his The Leopard co-star Claudia Cardinale and his daughter Anouchka Delon. The 19-year-old Delon has been featured in only one movie to date: José Pinheiro’s made-for-TV production Le lion (2003), based on a novel by Joseph Kessel (Belle de Jour, The Army of Shadows).

Set in Kenya during the Mau-Mau uprising of the 1950s, the TV movie features Anouchka Delon as a young girl who befriends the title character. Ornella Mutti and Alain Delon play, respectively, the girl’s mother and stepfather.

This French television production was a remake (or reboot) of Jack Cardiff’s The Lion (1962), which starred Pamela Franklin as the girl, Capucine as her mother, Trevor Howard as her stepfather, and William Holden as the man whose presence leads to family conflicts. (Heino Ferch apparently plays Holden’s role in the remake.) 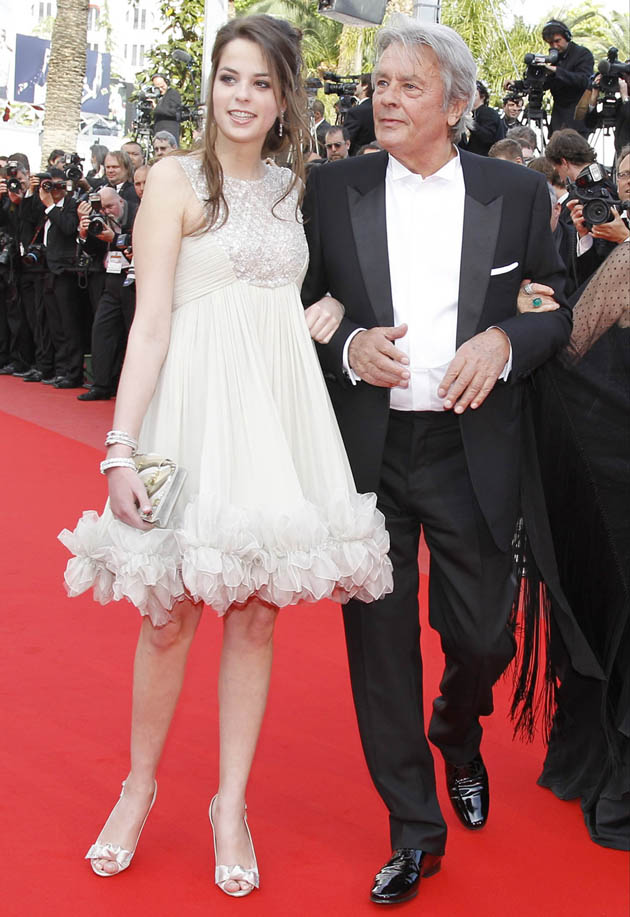 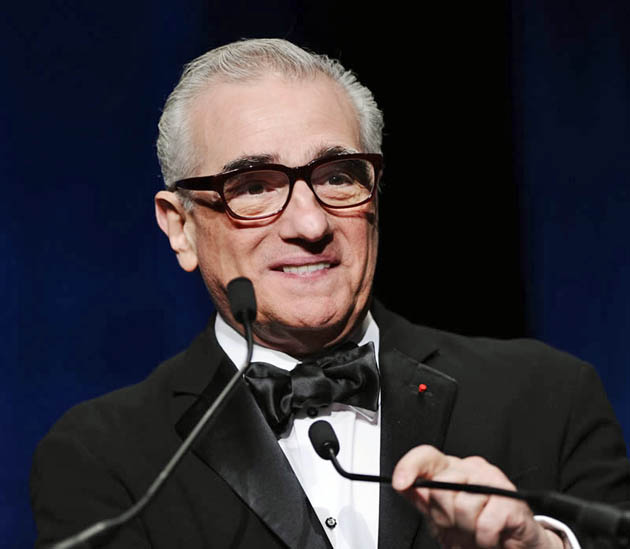 Martin Scorsese, Best Director Oscar winner for The Departed, attends the premiere of the restored Luchino Visconti classic The Leopard.

From the early ’70s to the mid-’90s, Scorsese was frequently associated with Robert De Niro. In recent years, in movies such as Gangs of New York (2002) and The Aviator (2004), he began developing a professional relationship with Leonardo DiCaprio. 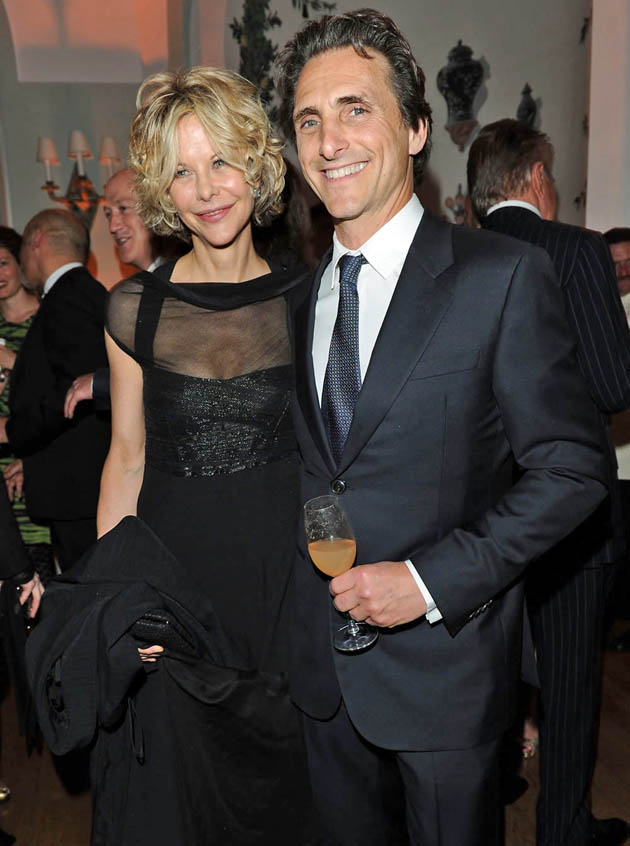 Meg Ryan is reportedly in Cannes to raise money for her debut as a movie director. Ryan says she plans to begin shooting later this year. So far, the project hasn’t been named.

Meg Ryan (born Nov. 19, 1961, in Fairfield, Connecticut) has been featured in more than 30 movies – not infrequently directed by female filmmakers – since her debut in George Cukor’s Rich and Famous in 1981. Ryan’s notable film credits include:

In The Women remake – a critical and box office dud – Meg Ryan, Annette Bening, and Eva Mendes were cast in roles played by Norma Shearer, Rosalind Russell, and Joan Crawford in the 1939 movie version directed by Rich and Famous’ George Cukor.

Update: The embodiment of 1990s big-screen sweetness & light in popular fare like Nora Ephron’s Sleepless in Seattle and You’ve Got Mail, Meg Ryan plays pretty, wealthy, cuckolded Connecticut/New York clothing designer Mary Haines in Diane English’s 2008 The Women revamp, in which the female characters are not only socialites but also professionals.

Ryan, whose film career had been in the doldrums for some time, was further hindered by this feminist comedy flop. Following the 2009 bomb Serious Moonlight, she was gone until her – failed – 2015 comeback vehicle (and directorial debut) Ithaca, her last feature to date.

June Allyson, Dolores Gray, and Joan Collins starred in the 1956 musicalized remake, The Opposite Sex.

Martin Scorsese, for his part, was at Cannes for the premiere of the restored version of Luchino Visconti’s 1963 period drama The Leopard, starring Burt Lancaster, Alain Delon, and Claudia Cardinale. 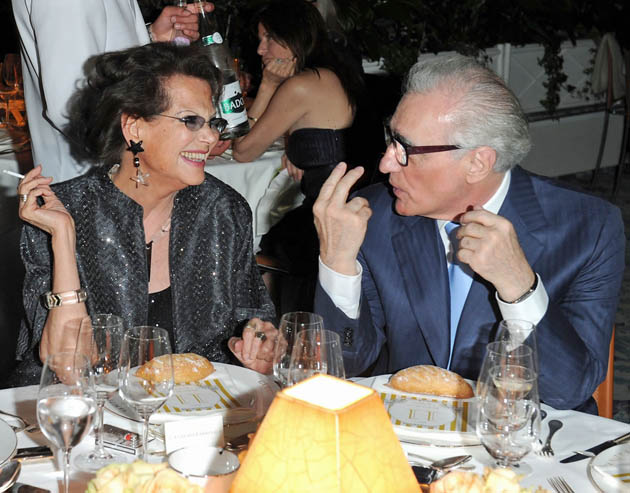 Veteran Claudia Cardinale, with cigarette in hand, and director Martin Scorsese, possibly naming The Leopard and Sandra as his two favorite Cardinale movies (notice his fingers), are seen above at the Vanity Fair and Gucci Party honoring Scorsese. 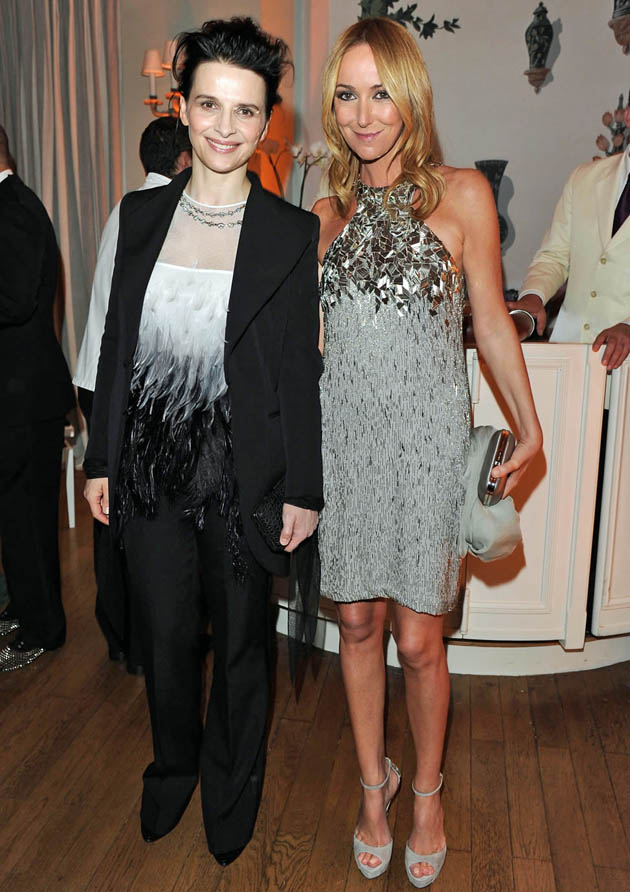 This year, Juliette Binoche is both the poster girl of the Cannes Film Festival and the star of Abbas Kiarostami’s Certified Copy, about the relationship between a middle-aged couple (William Shimell is the other half) while spending time in Tuscany.

Certified Copy has received mostly good notices at Cannes, and will likely get some sort of recognition on awards night. 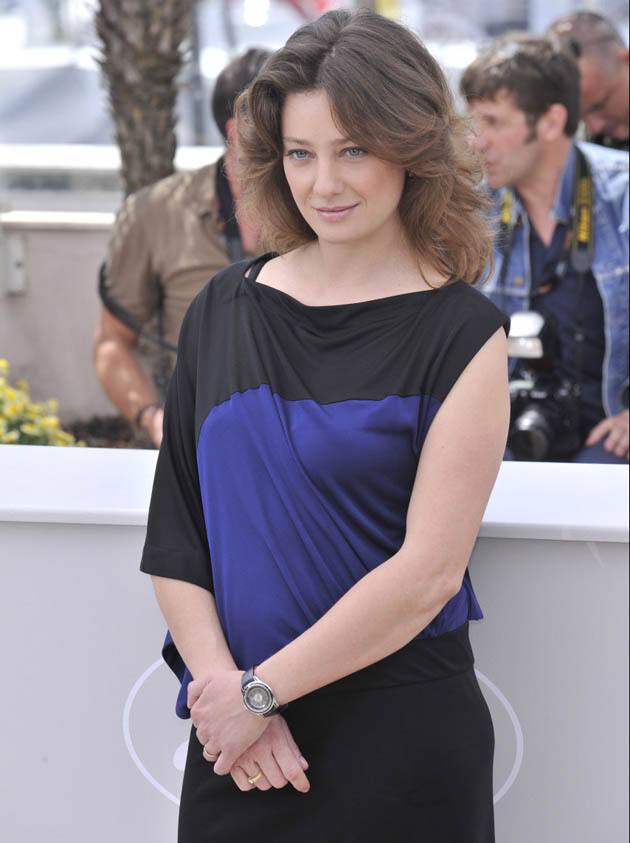 Giovanna Mezzogiorno attends the Jury Photocall at the Palais des Festivals during the 2010 Cannes Film Festival.

Giovanna Mezzogiorno has been featured in about 25 films since 1997. Besides Vincere, notable titles include: 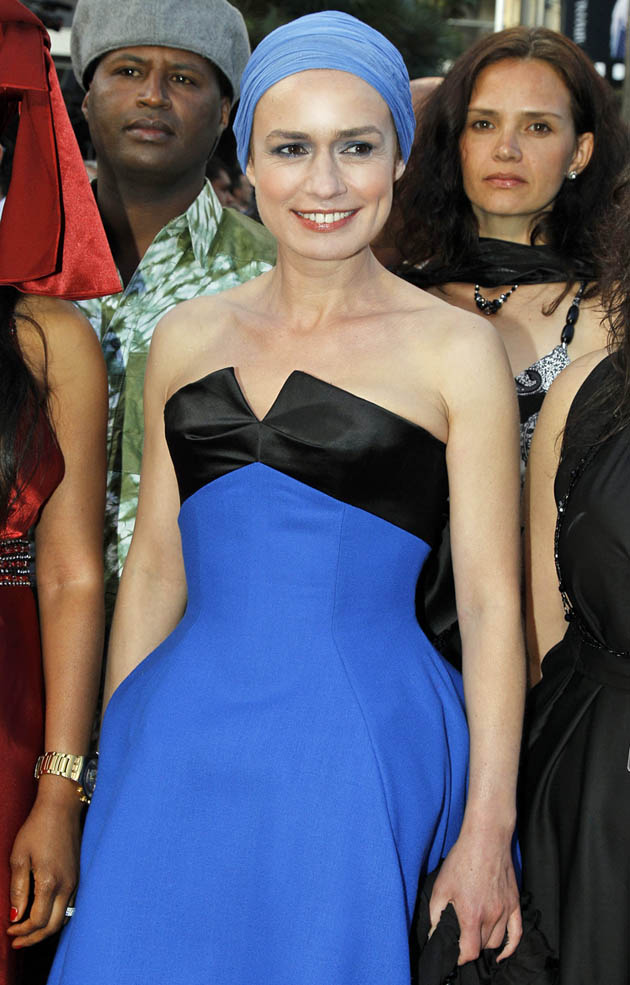 Wall Street: Money Never Sleeps is a sequel to Stone’s own Wall Street, which earned Michael Douglas a Best Actor Academy Award. Others in the cast of the 1987 socially conscious drama: Charlie Sheen and Daryl Hannah. The sequel received mixed notices at the festival.

Reviewers, however, were certainly more enthusiastic about Stone’s drama than about either Woody Allen’s You Will Meet a Tall Dark Stranger or Ridley Scott’s summer blockbuster wannabe Robin Hood, starring Russell Crowe and Cate Blanchett.

The film opens in North America on Sept. 24.

Sandrine Bonnaire has been featured in about 40 movies since the early 1980s. Notable films include: 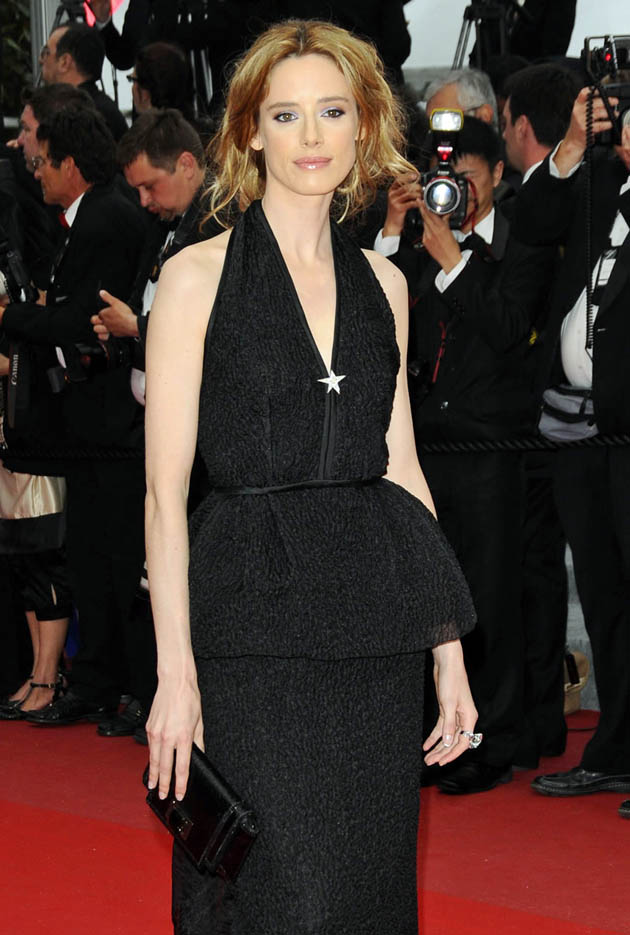 Pilar López de Ayala, the star of Manoel de Oliveira’s The Strange Case of Angelica / O Estranho Caso de Angélica, is pictured above holding a Swarovski vintage bag at the You Will Meet a Tall Dark Stranger premiere at the Palais des Festivals during the 2010 Cannes Film Festival.

Directed and written by Woody Allen, who has been releasing one movie or so a year since the late 1960s, You Will Meet a Tall Dark Stranger stars the following:

Like many recent Woody Allen films, You Will Meet a Tall Dark Stranger received mostly unenthusiastic reviews, and several downright negative ones as well.

Pilar López de Ayala has been featured in nearly 20 films since the late 1990s. Besides The Strange Case of Angelica, notable efforts include:

Alain Delon is such a beautiful man that even at the age of 75, with that mane of white hair and those blue eyes, he was extraordinary looking. In the last few years, of course, he is 81, he has not looked as good. I know it is very shallow of me but if only he would get those bags under his eyes fixed, it would make such a difference. Every year they are worse. It is more important that he is healthy and happy but I can’t help myself. Bravo to him for never having plastic surgery but it’s just a little tweak.