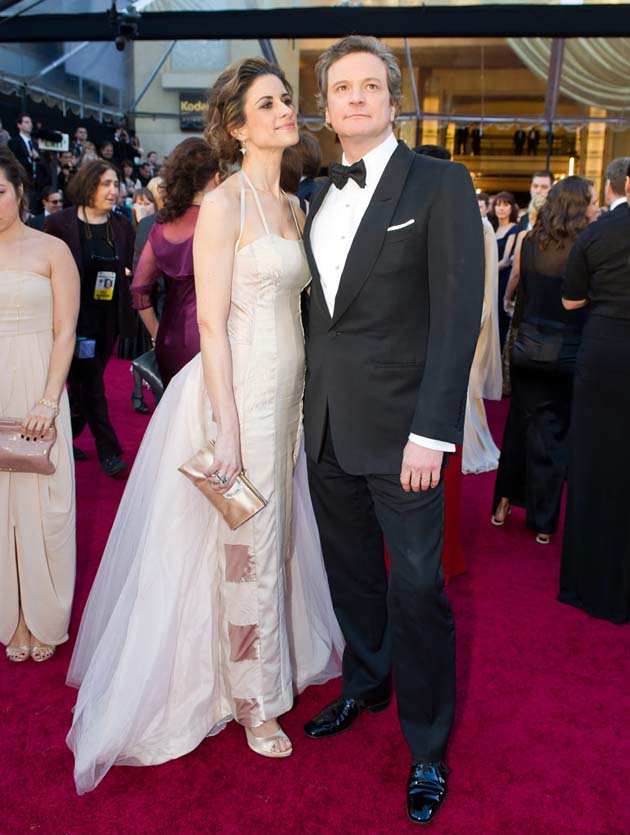 Colin Firth and wife Livia Giuggioli arrive at the 2011 Academy Awards on Feb. 27 at the Kodak Theatre in Hollywood.

For his performance as King George VI in Tom Hooper’s critical and box office hit The King’s Speech, Firth, as expected, took home the Best Actor Oscar. After receiving the statuette from the hands of Sandra Bullock, he remarked, “I have a feeling my career’s just peaked.”

Could be. Firth, who turned 50 last Sept. 10, has been featured in more than 40 movies. Chiefly notable among these are (updated in April 2015): 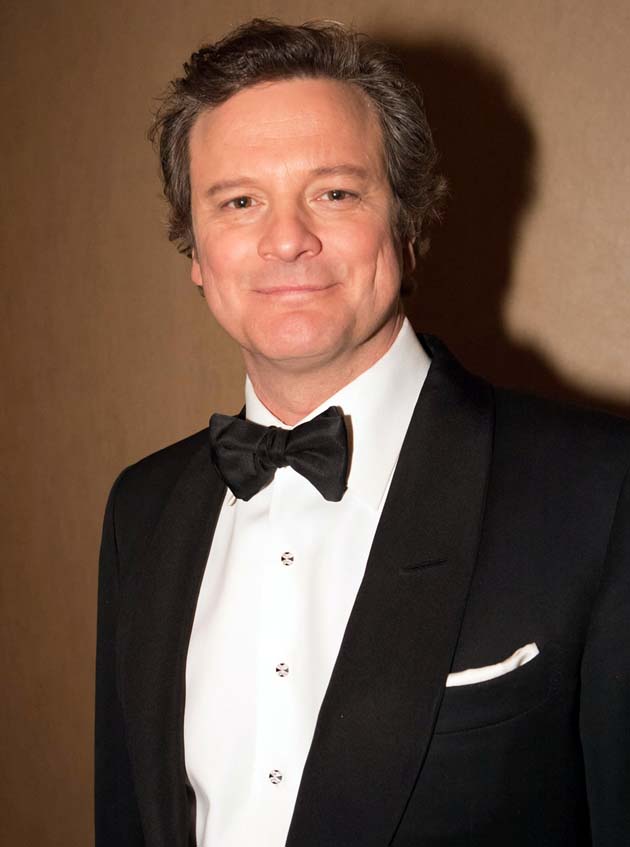 Pictured above is Best Actor winner Colin Firth backstage at the 2011 Academy Awards.

Firth’s Oscar nomination for The King’s Speech was his second. Last year, he was shortlisted for his portrayal of a grieving gay college professor in Tom Ford’s A Single Man. He lost to Jeff Bridges for Crazy Heart.

Coincidentally, Bridges was also in the running this year for Joel and Ethan Coen’s Western True Grit, which ended up not winning any awards despite its ten nominations. 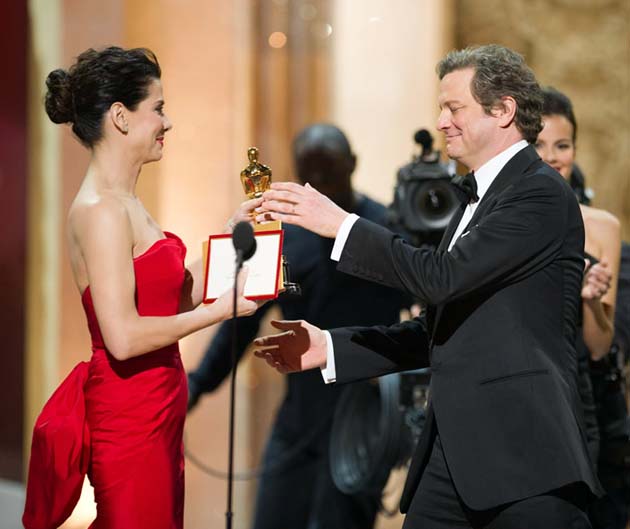 Colin Firth and Sandra Bullock at the Academy Awards ceremony: ‘You make me feel like dancing’ moment.

Colin Firth’s Academy Award acceptance speech included a reference to “stirrings” located “somewhere in the upper abdominals which are threatening to form themselves into dance moves.”

Whether or not that meant Firth was in the throes of becoming possessed by the spirit of Fred Astaire and/or Ginger Rogers – or perhaps Jessie Matthews (like Firth, she was British) – will remain an Oscar mystery for the ages. After all, Firth didn’t perform any tap dancing on stage, explaining that “joyous as [the stirrings] may be for me, it would be extremely problematic if they make it to my legs before I get off stage.”*

As the stirrings traveled through his body, he thanked the cast and crew of The King’s Speech (“Geoffrey, Helena, and Guy, whose virtuosity made it very, very difficult for me to be as bad as I was planning to be”), in addition to screenwriter David Seidler, “whose own struggles have given so many people the benefit of his very beautiful voice,” and director Tom Hooper “for the immense courage and clear-sightedness with which he interpreted [the struggles of the film’s main character].”

Besides thanking The King’s Speech producers Iain Canning, Emile Sherman, and Gareth Unwin, Colin Firth also had a word for The Weinstein Company’s Harvey Weinstein, “who first took me on 20 years ago when I was a mere child sensation” and for A Single Man director Tom Ford, “to whom I owe a very big piece of this.”

* While interviewed backstage at the Oscars, a reporter asked Firth, “You don’t want to let loose?”

No. I was struggling with the containment in that moment and I think I need some quality time alone. I don’t think this is the particular forum to display that. Anyone having seen Mamma Mia! will know what I’m talking about. 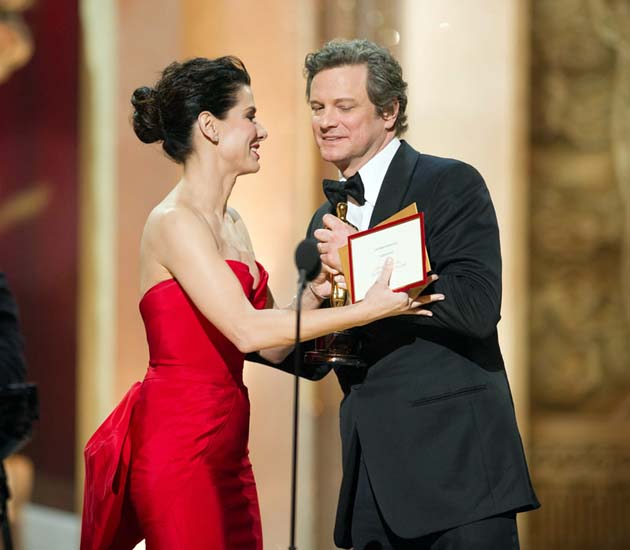 Topics worth mentioning – “journalists” asked several embarrassingly inane questions – included Tom Hooper’s direction, Firth’s belief that The King’s Speech doesn’t really have a message (even though it clearly does), and his discomfort with the PG-13-rated version of the film. Unfortunately, the at times quite outspoken Firth was reluctant to discuss the demise of the UK Film Council. See below.

Colin Firth on Tom Hooper’s direction and the fact that he had to perform a key dramatic scene right at the start of filming The King’s Speech:

… I think it was very good because I put both feet in and so did [Tom Hooper] and he committed to a style he wasn’t quite sure about yet. He still had a few options open, but after we completed that day which could have ended up being about 10 percent of our entire film, he realized he had committed to a cinematographic style.

And I had committed to my approach and to be squeezed down in the corner of a sofa, and Tom kept telling me to shrink myself physically because I’m much bigger than George VI. He was very slight and he had a famous small disposition.

Regarding the message (or lack thereof) in The King’s Speech:

… Quite obviously speech therapists and people who have difficulties with their speech of whatever kind, have responded to [The King’s Speech], and that is very powerful to me to be on the receiving end of that kind of feedback because what we do is very often – it’s justifiably judged as completely and utterly frivolous. …

But the fact is that it overlaps with something that has connected with or resonated with people who’ve, you know, feel they’ve been heard about something for the first time. … I don’t think it sent a message. I just think maybe it shines a light on something which badly needed it.

Regarding the PG-13 cut of The King’s Speech, which Colin Firth admits he hasn’t seen, he affirmed: “I don’t support it.”

When asked why not, his response was:

Because I think the film has its integrity as it stands. I think that scene [in which King George VI says the word “fuck” a few times] belongs where it is. I think it serves a purpose. I’m not someone who is casual about that kind of language I don’t relish.

I take my children to see football games, soccer. And I wouldn’t be able to, if I wanted to protect them from those kind of words at the expense of all else. …

… I don’t take that stuff lightly. But the context of this film could not be more edifying, more appropriate. It’s not vicious. It’s not to do insult [and] it’s not in any … context which might offend people, really.

It’s about a man trying to free himself through the use of forbidden words, and he’s so coy about it. I mean, I just can’t – I still haven’t met the person who would object to it. So I think the film should stand as it is.

Regarding the demise of the UK Film Council thanks to David Cameron’s Tory government:

Q. One of the reasons The King’s Speech actually got made in the first place is that it got a 1 million-pound grant from the UK Film Council. That Film Council has obviously just been scrapped by the incoming government. What do you think your success tonight and the success of the film says about that decision?

A. I don’t really want to get entangled in the political judgment on that. I tend to find that my rather insignificant opinions get more attention than they deserve, but I do think that on the face of it, that that was a short-sighted decision.

I do, however, think that the fact that the BFI seems to have taken up that role is very positive and I think that it was probably a sign that the government has recognized a need for a body like that … to find a way to get films financed with government cooperation. So I’m optimistic at the moment. 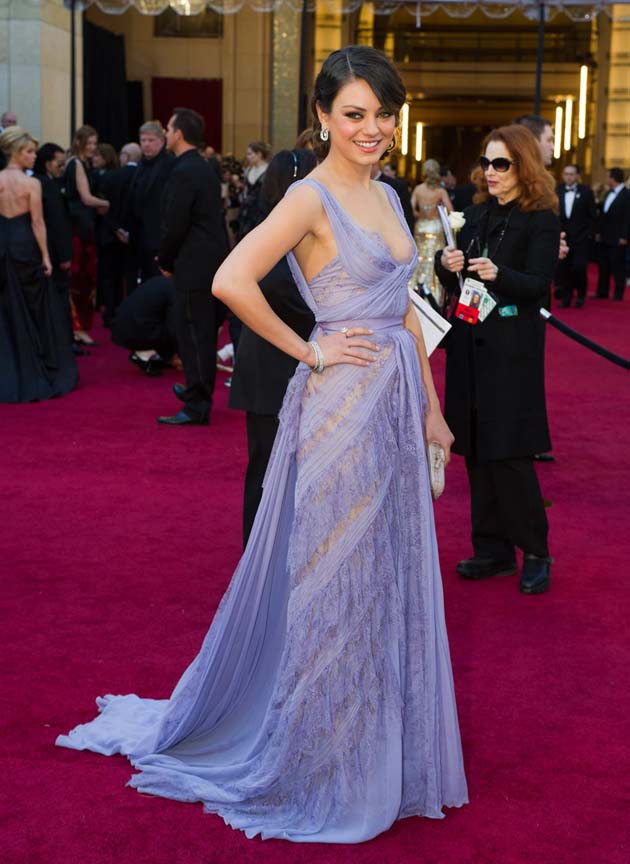 Even though she failed to be shortlisted for the Best Supporting Actress Academy Award for her performance as Natalie Portman’s fellow ballerina and (sort of) intimate acquaintance in Black Swan, Mila Kunis was in good spirits when she arrived at the 2011 Academy Awards, held on Feb. 27 at the Kodak Theatre at Hollywood & Highland in Los Angeles.

Kunis was a presenter along with her Friends with Benefits co-star Justin Timberlake, who kept making (unfunny) Banksy jokes. Timberlake’s fooling around was more effective when he imitated veteran Kirk Douglas teasing the Best Supporting Actress nominees. (The eventual winner was Melissa Leo for David O. Russell’s The Fighter.)

Besides Portman and Mila Kunis, the Black Swan cast includes the following: 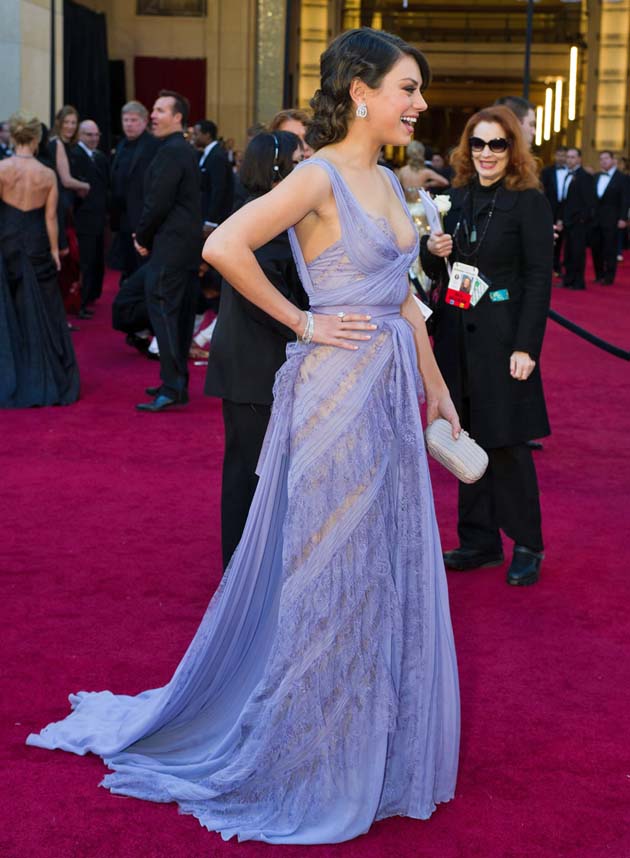 The Ukrainian-born, mostly Los Angeles-raised Mila Kunis has been featured in nearly 20 movies, mostly in supporting/minor roles. Her film credits include the following: 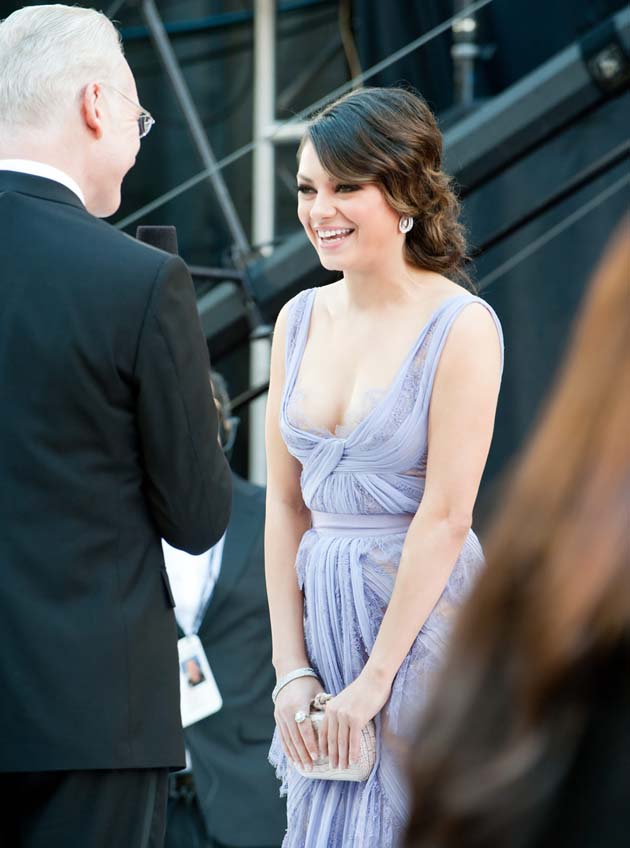 Mila Kunis in good humor at the Academy Awards.

Another image of Mila Kunis on the 2011 Academy Awards’ Red Carpet just outside the Kodak Theatre in Hollywood. 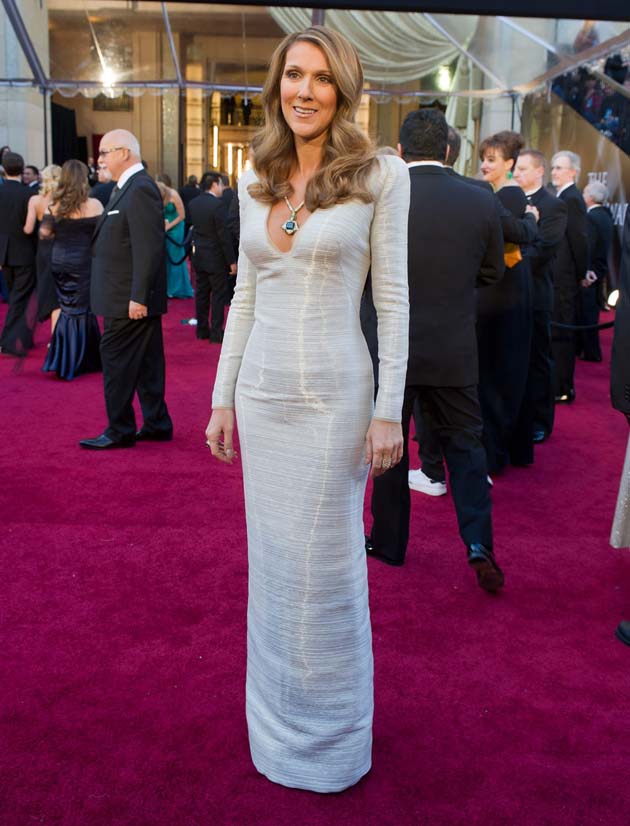 Singer Céline Dion arrives at the 2011 Academy Awards. The awards presentation ceremony was held on Feb. 27 at the Kodak Theatre in Hollywood.

Dion has one previous major connection to the movies: the Titanic ballad “My Heart Will Go On.” Additionally, Céline Dion’s voice has been heard in movies as diverse as At Play in the Fields of the Lord, Sleepless in Seattle, Asterix and the Vikings, Stuart Little 2, and Mona Lisa Smile.

This year, she sang “Smile” during the Oscarcast’s “In Memoriam” segment. 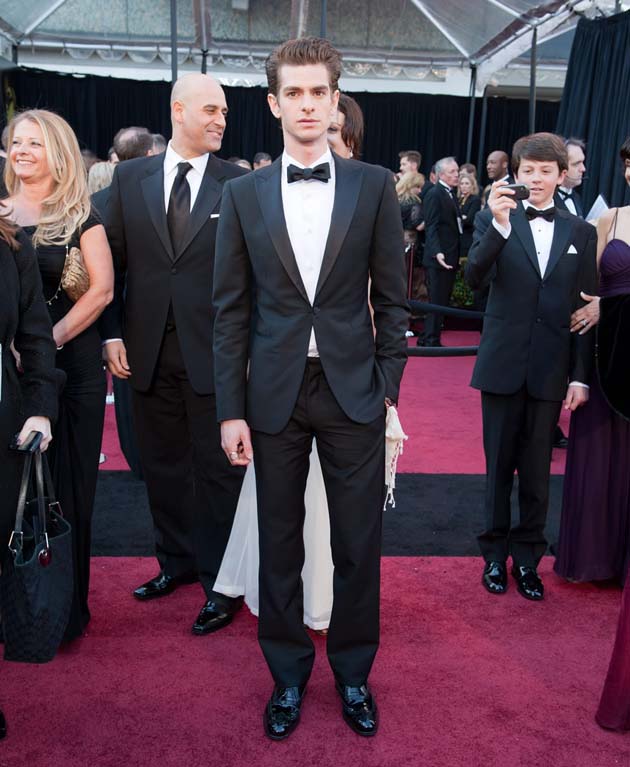 Andrew Garfield is seen above on the Academy Awards’ Red Carpet just outside the Kodak Theatre in Hollywood. Garfield had been touted as a potential Best Supporting Actor Oscar contender for his performance in David Fincher’s acclaimed drama and Best Picture nominee The Social Network, but he failed to be shortlisted. The year’s Best Supporting Actor winner was Christian Bale for David O. Russell’s The Fighter.

To date, Andrew Garfield has been featured in only a handful of movies. Titles include:

In 2010, Garfield was also featured in Mark Romanek’s Never Let Me Go, with Carey Mulligan and Keira Knightley. 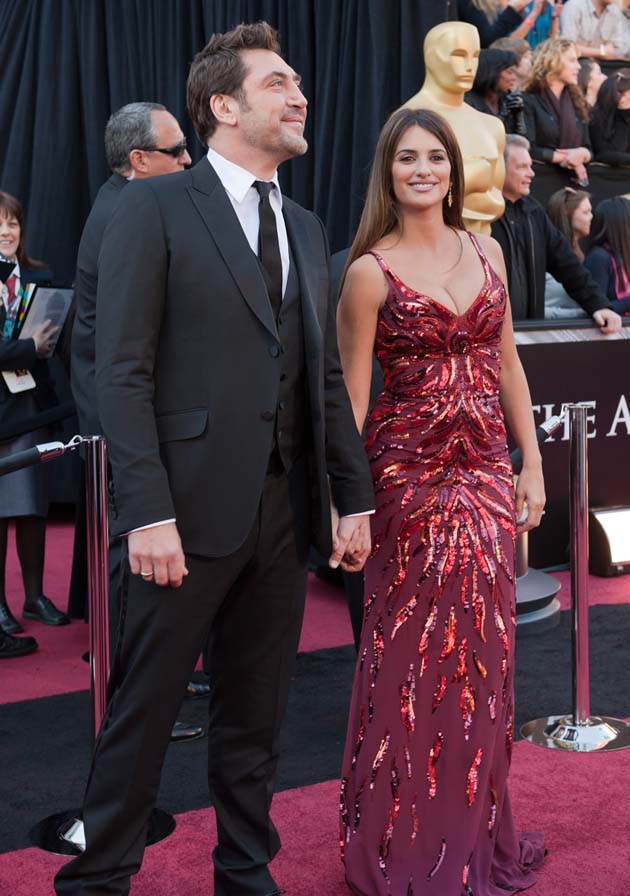 Penélope Cruz and Javier Bardem arrive at the 83rd Academy Awards held on Feb. 27, ’11, at the Kodak Theatre in Hollywood. Bardem – one of the Oscars’ rare non-English-language nominees in the acting categories – was up for Best Actor for his performance in Alejandro González Iñárritu’s Mexican-Spanish co-production Biutiful. As expected, the winner in that category was Colin Firth for Tom Hooper’s The King’s Speech.

Javier Bardem had been previously nominated as Best Actor for Julian Schnabel’s Before Night Falls (2000) and took home the Best Supporting Actor Oscar for Joel and Ethan Coen’s No Country for Old Men (2007).

Penélope Cruz also has three Oscar nominations, including one win, in her resumé: 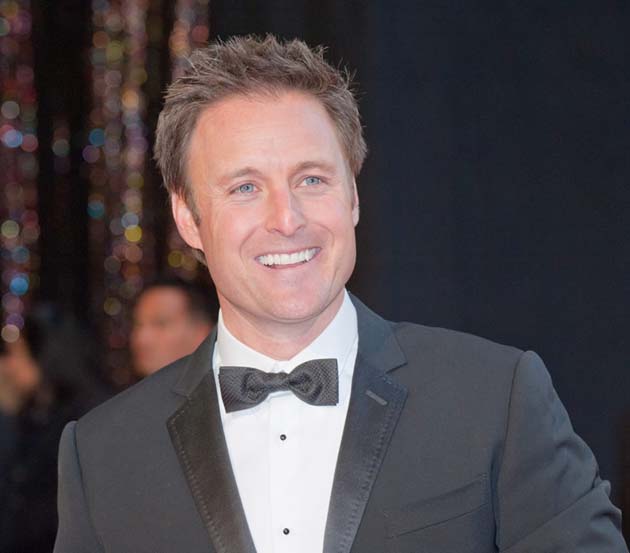 Natalie Portman was honored for her work as a mentally unbalanced ballerina in Darren Aronofsky’s psychological thriller Black Swan.

Even though James Franco’s performance as hiker/mountain climber Aron Ralston in Danny Boyle’s existential adventure drama 127 Hours received much better notices than his Oscar-hosting abilities, he failed to take home an Oscar statuette. As mentioned above, Colin Firth was the winner. 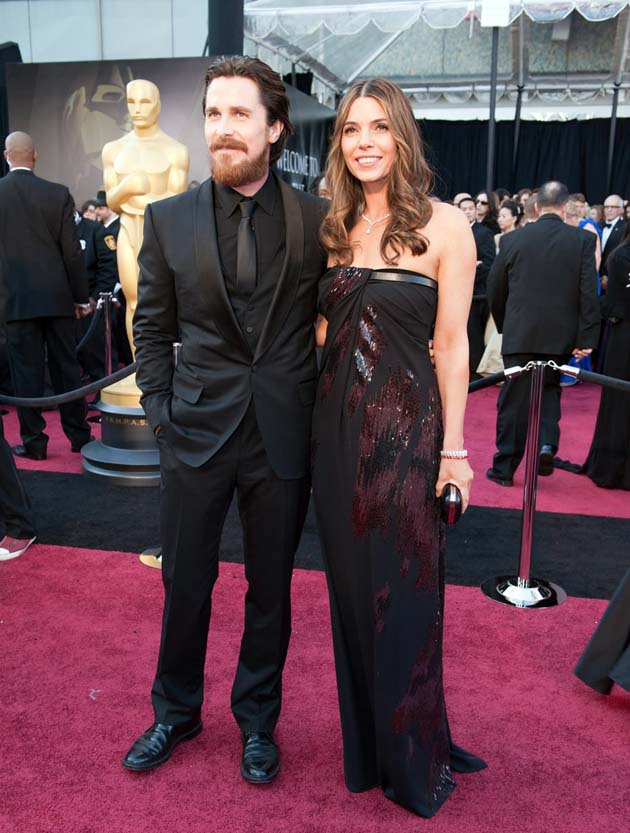 Christian Bale and wife Sibi Blazic at the Oscars.

Christian Bale and wife Sibi Blazic at the Academy Awards

Eventual Best Supporting Actor winner Christian Bale and wife Sibi Blazic Bale are seen above on the Red Carpet of the 83rd Academy Awards, held on Feb. 27, ’11, at the Kodak Theatre in Hollywood.

The Fighter was Christian Bale’s first Academy Award nomination. Among his other movie credits are:

As found on the IMDb, the Chicago-born Sibi Blazic did some stunt work in Christopher Nolan’s The Dark Knight.

Blazic is also credited as an “assistant” in four movies of the ’90s:

Christian Bale and wife Sibi Blazic were married in 2000. 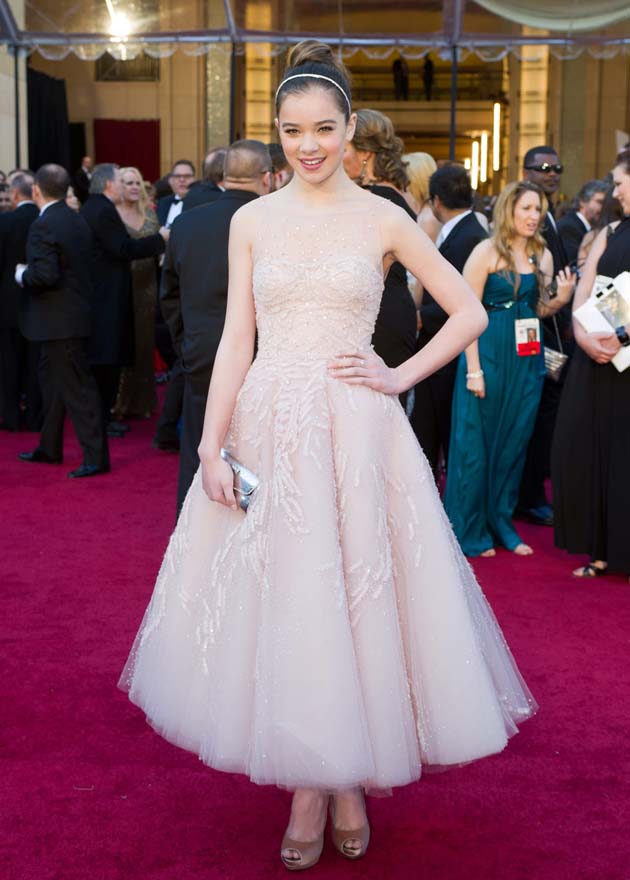 Hailee Steinfeld poses for the camera while on the 2011 Academy Awards’ Red Carpet outside the Kodak Theatre. Steinfeld was nominated for her role as an Avenging Teenager in Joel and Ethan Coen’s True Grit.*

Although the 15-year-old was shortlisted as a supporting player, her character is in fact True Grit‘s female lead. Also in the film’s cast: Best Actor nominee Jeff Bridges, Matt Damon, Josh Brolin, and Barry Pepper.

True Grit failed to win a single Oscar in spite of its ten nominations, including Best Director(s) and Best Picture. It’s now one of the top four biggest losers in Oscar history, along with the following:

However, the plot of the TV movie was different. It was sold as a sequel of sorts to the 1969 box office hit and its 1975 big-screen sequel, Rooster Cogburn, starring John Wayne and Katharine Hepburn.