Colonialism in Africa & Its Legacy: Something of Value + District 9 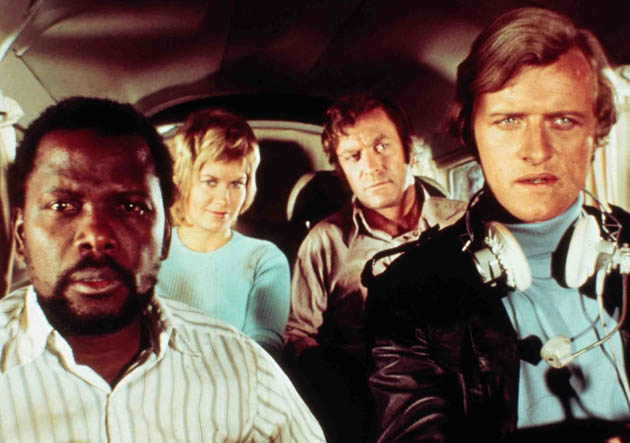 “Colonialism in Africa & Its Legacy: Something of Value & District 9” is a follow-up to “Apartheid movies: From Cry, the Beloved Country to Cry Freedom.”

Below is a quintet of apartheid-related films of the last four decades, all but one – the South African-set, U.S./Canada/New Zealand co-production District 9 – directed by and/or starring international “name” film talent.

In American director Ralph Nelson’s The Wilby Conspiracy (1975), Mandela and de Klerk actors Sidney Poitier (with whom Nelson had worked on Lilies of the Field) and Michael Caine (in his self-described “first foray into that very risky realm of ‘message’ pictures”) star as, respectively, an anti-apartheid South African activist and a British engineer on the run from South Africa’s secret police, headed by racist Nicol Williamson (Excalibur).

Message picture or no, the New York Times’ Vincent Canby was none too impressed, calling the Kenya-shot The Wilby Conspiracy “a sort of light hearted [The] Defiant Ones.”

Further down, Canby adds that Nelson’s thriller “does take itself as seriously as the plot demands but never too solemnly, since The Wilby Conspiracy is, at heart, a good old chase melodrama, decked out in modern dress and in liberated racial attitudes.”

A sequel to the juvenile blockbuster Lethal Weapon, Richard Donner’s Lethal Weapon 2 (1989) stars Mel Gibson and Danny Glover as two Los Angeles cops who, while pursuing currency smuggling and money laundering cases, become enmeshed with South Africa’s corrupt government. In the name of law and order, the righteous cops ultimately break the law and disregard orders so as to become merciless anti-apartheid vigilantes.

The word “apartheid” is nowhere to be found in Caryn James’ New York Times review of Donner’s actioner, but she does end her commentary in this apartheid-related dark note:

Because the South African villains have diplomatic immunity, the story is neatly set up for the moment when Riggs [Mel Gibson] and Murtaugh [Danny Glover] get to toss away their badges and turn into vigilantes. It is chilling to see these two comic good guys become Charles Bronson. The bloody finale of Lethal Weapon 2 … is brutal. It adds a dark, distasteful twist to an otherwise bright formula.

Jeffrey Boam received credit for the Lethal Weapon 2 screenplay, from a “story” by Shane Black (of this year’s hit Iron Man 3) and Warren Murphy.

District 9 with Sharlto Copley. A cross between science-fiction/fantasy and sociopolitical commentary, Neill Blomkamp’s Johannesburg-set action/horror thriller District 9 – an international co-production featuring (internationally) little-known South African performers – became a global sleeper hit upon its release in 2009. The title refers to a restricted area where house-fly-faced humanoid space aliens are detained – or segregated – not unlike South Africa’s black population during the apartheid era, one of the most corrosive legacies of European colonialism.

From the little-seen Bopha! to the sleeper blockbuster District 9

Directed by U.S. actor Morgan Freeman, Bopha! (1993) toplines Lethal Weapon franchise co-star Danny Glover as a rural South African cop at odds with his son. This little-seen effort ($212,000 gross in the U.S.) was based on a 1986 play by South African playwright/actor Percy Mtwa.

And finally, South African filmmaker Neill Blomkamp’s District 9 (2009) takes apartheid into the metaphoric realm of alternate realities. The film is set in 1982 Johannesburg (the director’s hometown), where the malnourished crew of an alien ship is detained in the titular area. But the apartheid-like segregation plan goes awry when one of aliens manages to escape.

Based on Blomkamp’s 2006 short film Alive in Joburg, which he adapted with Canadian screenwriter Terri Tatchell, District 9 features – for a change – a group of South African actors: Sharlto Copley, Jason Cope, Nathalie Boltt, and David James.

The legacy of European colonialism elsewhere in Sub-Saharan Africa

In addition to the apartheid-themed movies discussed above and in the preceding post, there have been countless international cinema productions dealing, directly or indirectly, with the legacy of European colonialism in Sub-Saharan Africa.

Unsurprisingly, approaches have differed throughout the decades. Older movies (e.g., Rhodes of Africa, Sanders of the River, The Four Feathers) – including some released well into the 1960s (e.g., Cy Endfield’s Zulu) – tend to present white Europeans as heroic, valorous beings, spreading Christian civilization and/or attempting to provide protection to the unwashed black masses, whether from other Africans (e.g., Basil Dearden’s Khartoum) or “enemy” Europeans (e.g., Hans Steinhoff’s anti-British Ohm Krüger).

Below, in brief, are three notable titles tackling the legacy of European colonialism in Sub-Saharan Africa in the second half of the last century. 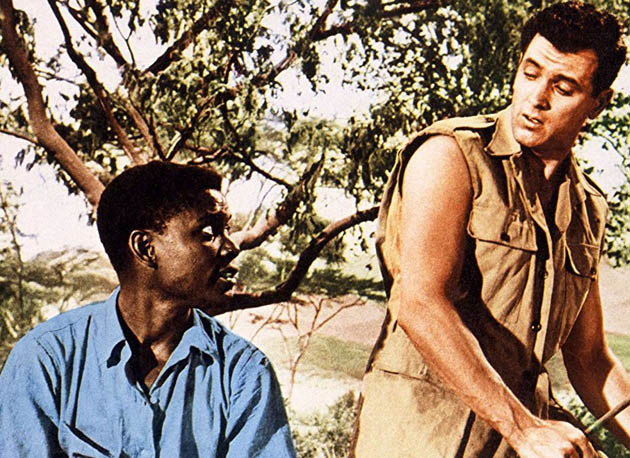 Something of Value with Rock Hudson and Sidney Poitier. Like several U.S.- and British-made, late 20th century apartheid movies, Richard Brooks’ 1957 drama Something of Value shows – from the point of view of a white character (Kenya farmer Rock Hudson) – the lasting, destructive legacy of European colonialism in Sub-Saharan Africa. Unlike Richard Attenborough’s Cry Freedom or Euzhan Palcy’s A Dry White Season, however, the main black character in Something of Value – played by Sidney Poitier – isn’t exactly a sympathetic figure: he’s the leader of the deadly Mau Mau rebels.

Something of Value: Rock Hudson vs. Sidney Poitier

Set in early 1950s Kenya at the time of the Mau Mau uprising, U.S. filmmaker Richard Brooks’ 1957 drama Something of Value is in some ways similar to the South Africa-set apartheid movies, as it addresses the all-pervasive, destructive effects of European colonial racism in overwhelmingly black Sub-Saharan Africa.

On a personal level, however, Something of Value radically departs from the approach taken by the apartheid-themed movies discussed elsewhere in this three-part post.

For even though its undisputed hero is a white man (American Rock Hudson) like those found in Cry Freedom (Kevin Kline) and A Dry White Season (Donald Sutherland), the main black character in Something of Value is a less obviously sympathetic figure – the hero’s childhood friend-turned-Mau Mau rebel (American Sidney Poitier once again cast as an African). Understandably, the “native,” part-savage black character, who ultimately turns against the star, suffers a less-than-pleasant fate at the film’s climax.

Also in the Something of Value cast are British actresses Dana Wynter as Hudson’s fiancée and Wendy Hiller as his sister. Brooks himself wrote the screenplay, based on U.S. author and big game hunter Robert C. Ruark’s novel.

However indirectly, European colonialism is also at the center of Northern Ireland-born Terry George’s 2004 real-life-inspired political drama Hotel Rwanda, which revolves around the tribal hatred – turned genocidal – between Rwanda’s Hutus and Tutsis, a divide-and-conquer legacy of 75 years of Belgian control of a sizable chunk of Central Africa.

Directed by John Ford, the 1953 remake, Mogambo, was set in “exotic” Africa. Among the wild animals roaming about were Clark Gable, Ava Gardner, Grace Kelly, and Donald Sinden.

Racial/sociopolitical issues and the legacy of European colonialism were the least of the film’s concerns.

The legacy of European colonialism: image of Sidney Poitier and Rock Hudson in Something of Value: Metro-Goldwyn-Mayer.

“The Legacy of European Colonialism in Sub-Saharan Africa: From Something of Value to District 9” last updated in July 2018.

The Ten Commandments: Most Important Religion Films of All Time