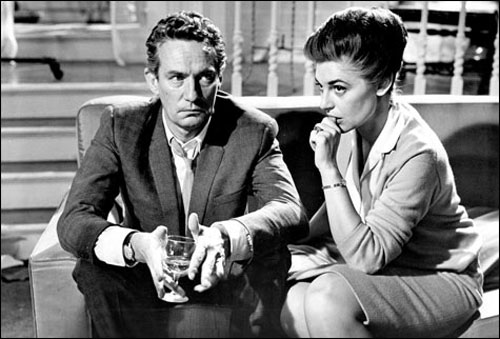 Columbia Classics: Peter Finch and Anne Bancroft in Jack Clayton’s British-made 1964 drama The Pumpkin Eater. Elsewhere, Bette Davis outdoes Joan Crawford in the slapping department in the 1956 drama Storm Center, in which Davis plays a librarian concerned about civil liberties – including her own.

Following the lead of Time Warner, Sony Pictures has started the distribution of on-demand DVDs of rare (or somewhat rare) classics and not-so-classics found in its library.

Columbia Classics has yet to offer Bette Davis in The Menace, Jean Arthur in The Most Precious Thing in Life, or Melvyn Douglas in The Lone Wolf Returns, but among their dozens of releases are a number of goodies.

Also, Terence Stamp delivering a remarkable performance as a mentally challenged man in The Mind of Mr. Soames (1970); Bette Davis and Kim Hunter in the anti-Red Scare paranoia Storm Center (1956); Rosalind Russell in the melo The Guilt of Janet Ames (1947); the B-mystery The Spiritualist (1944), with Turhan Bey and Lynn Bari; and dozens more.

Michael Redgrave in the “The Ventriloquist’s Dummy” segment in Dead of Night.

Turner Classic Movies’ horror/mystery/suspense Halloween marathon kicks off this evening with a showing of the 1945 British classic Dead of Night, which, 65 years later, remains one of the best efforts in the psychological-horror genre.

Also this evening, Alfred Hitchcock’s Rebecca, a sumptuous David O. Selznick production starring a flawless Joan Fontaine as “I” de Winter and a surprisingly restrained Laurence Olivier as Rebecca’s widower. (Vivien Leigh wanted to play “I,” but it’s a good thing that she didn’t. Other top contenders included Margaret Sullavan and Loretta Young.)

Judith Anderson nearly steals the show as the governess with lesbian tendencies, while Florence Bates is hilarious as an obnoxious dowager.

Rebecca may be less Hitchcock than Selznick, but in my invariably humble opinion this Best Picture Oscar winner is one of the director’s very best.

Robert Mulligan’s The Other has elements from Jack Clayton’s The Innocents and from several The Twilight Zone and Night Gallery episodes, but it’s not quite as good.

Joseph L. Mankiewicz’s Dragonwyck is a sort of Jane Eyre-like melodrama (I haven’t seen it, yet), starring Gene Tierney, then at the height of her popularity, and Vincent Price.

I haven’t felt that much pleasure watching a movie scene in a such a long time.

oh! how that little a*hole in training deserved some serious slapping and shaking… LOL