Comedy Actress Rediscovered: She Could Be Chaplin! 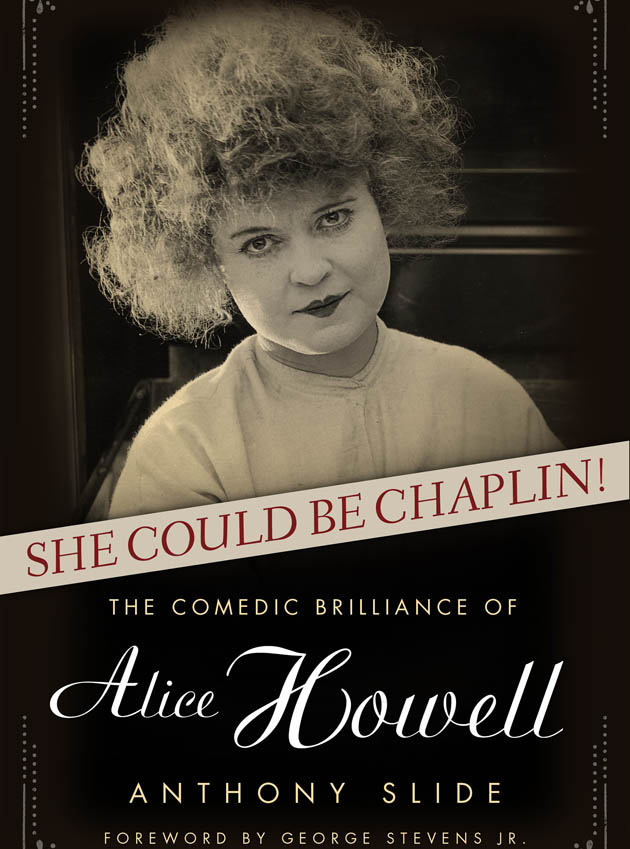 Early comedy actress Alice Howell is an obscure entity even for silent film aficionados. With luck, only a handful of them will be able to name one of her more than 100 movies, mostly shorts – among them Sin on the Sabbath, A Busted Honeymoon, How Stars Are Made – released between 1914 and 1920.

Yet Alice Howell holds (what should be) an important – or at the very least an interesting – place in film history. After all, she was one of the American cinema’s relatively few pioneering “funny actresses,” along with the likes of the better-known Flora Finch, Louise Fazenda, and, a top star in her day, Mabel Normand.[1]

Also of note, for nearly two decades Howell was the mother-in-law of two-time Best Director Oscar winner George Stevens (A Place in the Sun, 1951; Giant, 1956), who was married to minor 1920s actress Yvonne Howell (Flaming Flappers, Fashions for Women) from 1930 to 1947. Their son is American Film Institute founder and Honorary Oscar recipient George Stevens Jr.

Author and film historian Anthony Slide has agreed to do a brief Q&A about Alice Howell and his book She Could Be Chaplin!: The Comedic Brilliance of Alice Howell. See below.

I am often critical of film books on subjects which seem too obscure to be worthy of a book-length study, and so I understand questioning why I should want to write a book on Alice Howell.

The answer is relatively simple. I think she is a much underrated silent film comedienne and one of major importance in the continuing study of women in silent film. She was very much unique. An original. And perhaps with a little more effort on her part and a major producing entity behind her, she might have become as big a name as Mabel Normand.

Adding to my interest in getting this book published is that her grandson is George Stevens Jr., founder of the American Film Institute and the Kennedy Center Honors, and someone who was most supportive of me in my early years in the United States. It was George, many years ago, who suggested that I research his grandmother and provided funding for the project.

As time went by, and I got older, I wanted to see the research published. Hence this volume. I might add that I had never considered it a full-length book – there is simply not enough material available – but rather a substantial monograph. Happily, the University Press of Mississippi agreed to take on a book that is not really book-length. 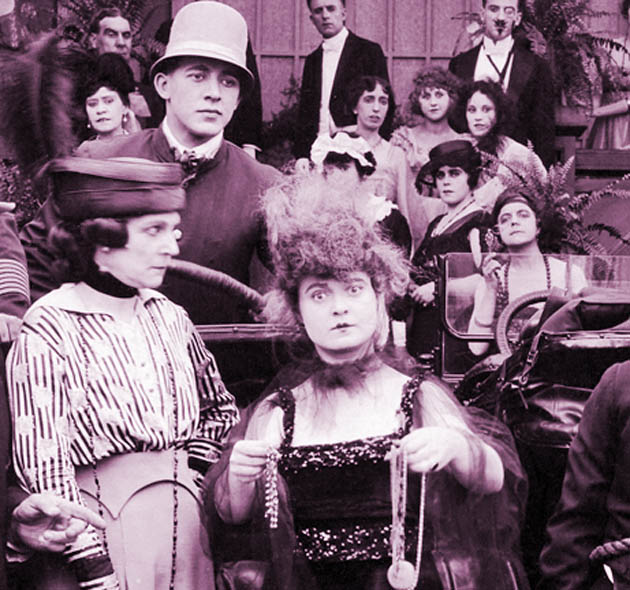 Silent comedy actress Alice Howell in one of her more than 100 movies, mostly shorts released between 1914 and 1920. Although never a film star, she was a notable female American cinema pioneer.

It is unfortunate, really, that Alice Howell left Mack Sennett in 1914 and went on to star for Henry “Pathé” Lehrman at L-Ko, hardly a premier company, whereas Louise Fazenda joined Mack Sennett a year later, in 1915, and worked with him through 1921. There surely can be no argument that Sennett understood screen comedy and nurtured his players – particularly if it is true that he could hold Fazenda over Normand as a threat if the latter did not do as she was told – helping to consolidate their fame and fortune.

As the author of a book on Alice Howell, I must promote her as a more prominent comedienne than Louise Fazenda, but I would never denigrate Fazenda, who made an easy transition to feature film work and into the talkies, and continued to get good roles. Perhaps her marriage to Warner Bros. executive Hal Wallis helped, but she could just as easily have succeeded based on her own talent.

Were there many – or any – differences regarding the types of comedy women and men were allowed to do? For instance, was it OK for women to be as “physical” as men in their comedy work?

It would be foolish to suggest that Alice Howell was in the same league as any of the male comedians you mention. Perhaps audiences were not ready for a male equivalent of Chaplin or Harold Lloyd, although Dorothy Devore comes pretty close to the latter with the 1924 feature Hold Your Breath. (By the way, does anyone know if a complete version of this feature exists?)

It was probably not considered appropriate for women to be as physical in their screen work as men. Certainly, you had silent serial stars who did their own stunts, but quite often it would be a stunt man in a wig doubling for a female star.

It is to her credit that Alice Howell could do a pratfall as well as any of her male counterparts, and, apparently, felt nothing unladylike in such an accomplishment. 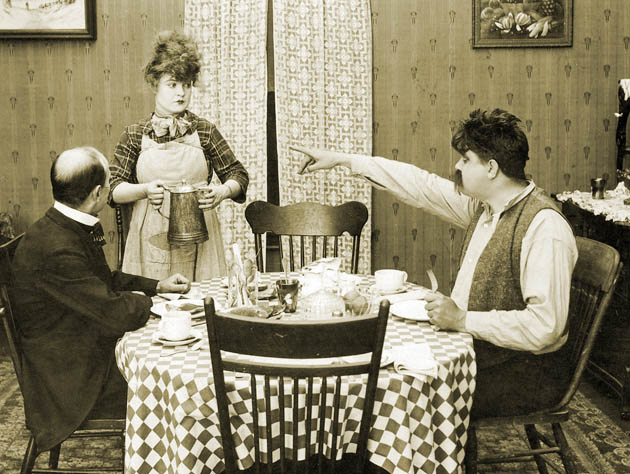 Funny actress Alice Howell was never as popular as comedy star Mabel Normand, but perhaps Howell could have become a bigger film name had she been more focused in a movie career than in real estate investments.

Do you agree with that assessment? If so, do you think that explains why Alice Howell is so utterly forgotten not only today but going as far back as the last seven or eight decades?

This is a difficult question to answer. I am sure if you look back over remarks I have made in the past 45 years (and I have been around a long time) I have suggested that the contribution of women pioneers has been ignored because film history was written by men. At the same time, the pendulum seems to have swung too far in the opposite direction, and we have women historians making claims for female film pioneers that are often incorrect.

For example, the unsubstantiated statement made by a number of so-called scholars and academics that 50 percent of all silent films were written by women. Untrue. Check the numbers.[2]

And I have to point out that when I first wrote about silent women directors in America back in 1978, I was the only one to consider the subject and the first seriously to research it.

Could forgotten comedy actress really have been Chaplin?

Perhaps I am guilty of a certain amount of hyperbole. The publisher and I were trying to come up with a good title for the book. We selected that title in part out of a belief that Chaplin’s name on the cover would sell the book. But equally because throughout her career Alice Howell was described as a female Chaplin.

Consistently film reviewers and writers compared her work to that of Chaplin. Personally, I don’t believe she was in any way influenced by Chaplin, but there is definitely a similarity during the early years of both their careers as far as costume selection and basic comedy techniques are concerned.

Of course, later Chaplin proved his genius with his use of pathos and the continued sophistication in his comedy, whereas Alice Howell always seemed to continue along the same path she and Henry “Pathé” Lehrman had chosen for her in 1915. 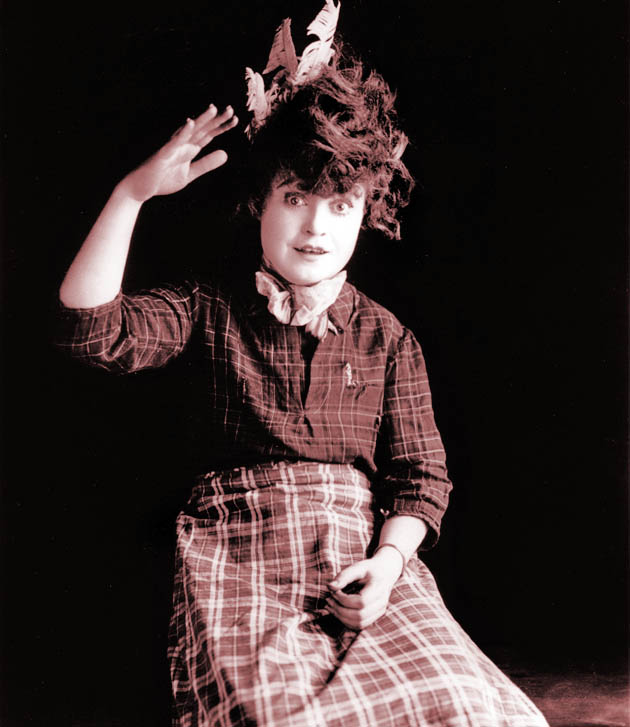 The problem really is that Alice Howell didn’t care that much about her screen career. She became a film actress and then a film star with one intent in mind, and that was to make money to invest in real estate.

As her daughter, Yvonne, pointed out, her mother was Irish-American and the Irish care about land. She wanted money to invest in land. And invest she did – very well. When she was not making films, she was handling her real estate investments and collecting rents. When she retired from the screen, she continued in that endeavor.

I have no idea if George Stevens asked her to appear in any of his films, but if he did, I suspect she would have responded in the negative. It would have interfered with her work as a real estate entrepreneur.

I think she is an original. She may not be an auteur in the recognized sense of the word, but she was a female film pioneer with a characterization unique to her.

On screen, she was a “slavey,” defined as a maid of all work usually in a boarding house. In England, she would have been called a skivvy – a word I prefer. She was the definitive screen slavey, a role not totally unique to her but one she made her own.

Personally, I like her most in One Wet Night [1924], a later film from the 1920s, in which she is not a slavey but a housewife and she is not wearing her usually comic make-up or costume. I know it is a strange choice, but based on the accessible films it is one that I personally prefer. 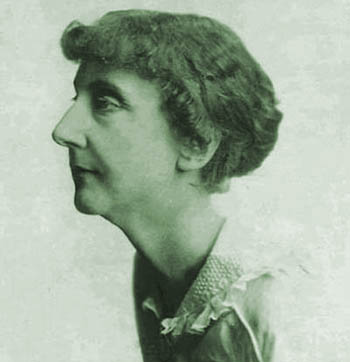 Comedy actress Flora Finch was already in her 40s when she made her (recorded) film debut.

[1] The London-born, bird-like Flora Finch, in her 40s at the time she began appearing in short films, was known for her pairings with popular 1910s comedian John Bunny – e.g., the 1912 entries Pandora’s Box, The Pseudo Sultan, The Awakening of Jones.

Following Bunny’s death in 1915, Finch continued working in minor roles and bit parts (the 1927 version of The Cat and the Canary, San Francisco, The Women) until shortly before her death at age 72 in January 1940.

Fazenda married Warner Bros. executive (and later producer) Hal B. Wallis (Little Caesar, Mystery of the Wax Museum, Casablanca) in 1927. She died following a stroke in 1962.

The American cinema’s single female comedy star of the silent era*, Mabel Normand was seen in more than 200 shorts and features from 1910 to 1927. Notable feature credits include:

According to Hollywood lore, Mabel Normand’s stardom was derailed by her involvement in the scandal surrounding the (still unsolved) murder of director William Desmond Taylor in 1921. She died of tuberculosis at age 37 in 1930.

[2] Note from the interviewer: According to Anthony Slide’s own research (regarding silent feature films), that figure – including screenplays co-written by men – is closer to 25 percent.