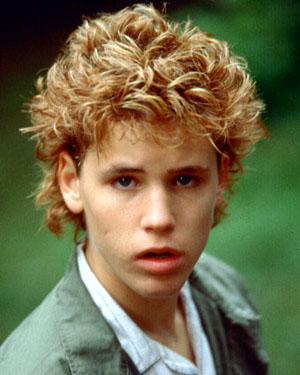 Corey Haim, the Lost Boys and Lucas actor who died Wednesday, had a fraudulent prescription at the time of his death, according to an Associated Press report. The report ads that the prescription was linked to a “major drug ring.”

No illegal drugs were discovered at the apartment of Haim’s mother, where the actor was saying. His mother has been battling cancer. Haim’s official cause of death was “pulmonary congestion.” The actor also suffered from an enlarged heart. Toxicology reports haven’t been released.

E! Online says that a fund has been set up to help Haim’s family pay for transporting his body to Toronto, where the Canadian-born actor will be buried.

Previous post: Corey Haim, best known for the 1980s movies The Lost Boys and License to Drive, has died from an apparent drug overdose. Haim, who had been staying with his mother in the Los Angeles suburb of North Hollywood was pronounced dead early Wednesday at Providence St. Joseph’s Medical Center in Burbank. He was 38.

The Canadian-born Haim (Dec. 21, 1971, in Toronto) had been struggling with drug addiction for years. In 2007, he attempted a comeback in an A&E reality show The Two Coreys (above), sharing the limelight with longtime friend and co-star Corey Feldman.

According to a CBC report, Haim took up acting at the insistence of his mother, who felt that it would help him overcome his shyness.

Haim’s first acting gig was in the CBC-TV series The Edison Twins in 1984. That same year, he had a featured role in Michael Apted’s Firstborn, playing opposite Teri Garr, Peter Weller, Sarah Jessica Parker, and Robert Downey Jr. Haim then played Sally Field’s son in Martin Ritt’s well-received Murphy’s Romance (1985) and a disabled boy in Daniel Attias’ werewolf thriller Silver Bullet (1985) before starring in another well-received film, David Seltzer’s growing-pains comedy-drama Lucas (1986), in which Haim played a fourteen-year-old in love with a girl (Kerri Green) who falls in love with his older buddy (Charlie Sheen).

Straight-to-video releases followed in the 1990s, among them Last Resort (1994), Dream a Little Dream 2 (1996), and Fever Lake (1996), until Haim’s career came to an abrupt halt in the early 2000s because of drug problems. At one point, Haim, who had been addicted to cocaine and Valium, actually suffered a drug-related stroke. 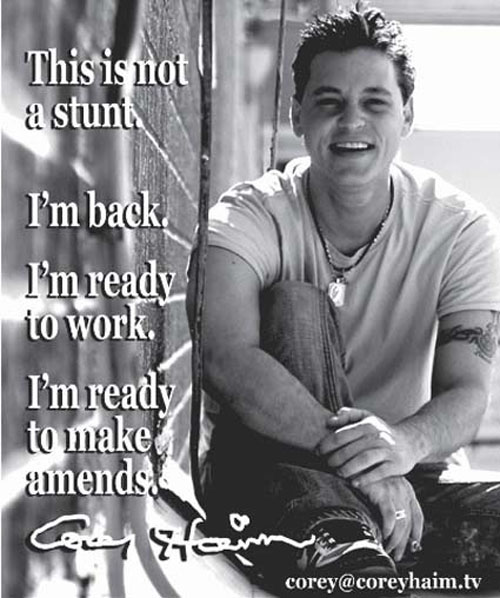 In early 2008, Haim placed an ad in the trades that read: “This is not a stunt. I’m back. I’m ready to make amends. I’m ready to work.” And back to work he did though his drug addiction would interfere with his career once again.

Following his reality-show stint and a drug relapse that strained his friendship with Feldman, Haim got busy. According to the IMDb, in the last couple of years he had about a dozen films in various production stages, including a direct-to-video sequel to The Lost Boys called Lost Boys: The Tribe. A third sequel was announced in late 2009.

Off screen, Haim was reportedly dating Victoria Beckham when she was starting out as one of the Spice Girls in the early ’90s. An engagement to Tiffany Shepis was announced in late 2008.

Corey Haim’s two last completed films were both thrillers: B.C. Furtney’s New Terminal Hotel, an exploration of the dark side of Hollywood in which Haim plays a “a nosy has-been rock star,” and Michael Masucci’s American Sunset.

Addendum: There were no illicit drugs found in Haim’s mother’s apartment. It seems that Haim accidentally overdosed on prescription drugs.

Sydney Pollack: The Way We Were + Out of Africa Oscar-Winning Filmmaker

Help HIS LEGACY LIVE ON..

FOR ANY BROTHERS,SISTERS, CUSINS,AUNTS,UNCLES
OR ANY OTHER FRIENDS FAMILY ..
THANK YOU YES YOU TOO COREY FELDMAN FOR STANDING BY YOUR FRIEND, TRYING TO HELP HIM THROUGH BEING THERE FOR HIM THROUGH THICK & THIN FOR HIM EVEN THOUGH WEYOU HAD A SHORT TIME WITH HIM AT LEAST YOU WERE ABLE TO SPEND TIME WITH HIM THAT YOU GOT BETTER WE GOT TOO KNOW HIM AT LEAST FOR THE TIME AVAILABLE..PLEASE TAKE TIME TO SPEND TIME WITH REST OF FAMILY SO WE CAN HELP HIS MEMIRY LIVE O

SEE YOU LATER COREY HAIM MISS & LOVE YOU LOVE JENNY WISHART FROM PORTLAND, OREGON..
HOPE YOU COREY’S MOM IS DOING OK..
CANCER IS NO LAUGHING MATER MY MOTHER HAD 3 TYPES SHE SERVIVED THEM
SHE GOT LUCKY NOT TO HAVE THE WORST ONES..
I PRAY YOUR CANCER IS GONE FOREVER, NOT JUST IN REMISSION.. YOU GAVE BIRTH TO A WOUNDERFUL SON.. YOU RAISED HIM THE BEST YOU KNEW HOW..YOU WANTED HIM TO HAVE EVERYTHING, YOU WANTED TO LOVE HIM,HOLD HIM HUG HIM EVERYDAY, I AM SORRY FOR YOUR LOSS, I WANTED MORE FOR COREY SO MUCH MORE, BUT MOST OF ALL I ONLY WANTED TO SEE & FEEL HIM HAPPY IN MY SPIRIT.. YOUR A GOOD MOTHER & YOUR STILL HIS MOTHER HE IS JUST IN SPIRIT FORM, HE LIKE MICHEAL JACKSON GONE TOO SOON..

MISS YOU COREY HAIM HAVE LOVED YOU FOREVER WANTED TO MARRY YOU 20 YEARS AGO & TRIED TO ACTUALLY GET AHOLD OF YOU FIND YOU MEET YOU IN PERSON..I WAS SINGLE & TRULY FELT I COULD MAKE YOU HAPPY IF I JUST AT LEAST COULD BE YOUR FRIEND NOT BECAUSE YOU WERE A STAR BUT BECAUSE I TRULY WANTED TO KNOW YOU PERSONALLY, WATCHED & HAVE MANY PICS MOVIES OVER THE YEARS ALL GREAT, WOULDN’T MISS ANY MOVIES,ALL OF YOUR FILMS ARE MY FAVORITE.. BUT WHEN I GOT TO SEE YOU ON BIOGRAPHYS & THE 2 COREYS ..MY HEART BROKE I REALLY WAS ACTIVELY LOOKING NOW YOUR PASSED TO A NEW LIFE , HOPE U GOT TOO KNOW GOD BEFORE U WENT BUT IF U DIDN’T I WILL TRY HELP U PASS ON TO HEAVEN IF THATS WHAT YOUR FAMILY WANTS NOW WHAT 37 YEARS OLD I CAN’T HELP BUT THINK WE COULD HAVE BEEN..LOVE JOREGONENNY WISHAREE YOU LATER MY LOVE FROM PORTLAND ,OREGON