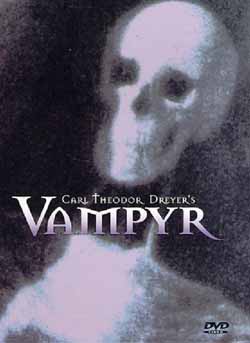 I haven’t seen Vampyr, yet, though if it’s a Carl Dreyer film it must be watched at least once. The Danish-born Dreyer isn’t the most accessible of filmmakers, but his films tend to be visually stunning. Indeed, Dreyer is a master when it comes to creating striking, unforgettable compositions. My chief problem with his work is that his films tend to overstay their welcome by a good half hour. Exception to this rule: Vredens dag / Day of Wrath, my favorite film of 1943.

Vampyr revolves around the many mysteries a traveler encounters at a sinister castle, among them the fact that the TCM synopsis says that (Baron) Nicolas Degunzburg plays Allan Grey, while the IMDb says that he’s played by Julian West. Solution to the mystery: They’re one and the same person. Less clear is why Allan Grey becomes David Grey in the English- and French-language titles for Vampyr.

Of interest … The unusual-looking Sybille Schmitz, who became an important star in Nazi Germany, has a secondary role in the film. Schmitz went on to star in numerous important productions, most notably the 1943 version of Titanic – which is considerably better than James Cameron’s 1997 mega-production. Schmitz’s later years, when she became dependent on drugs and couldn’t find any film work, served as inspiration for Rainer Werner Fassbinder’s 1982 drama Die Sehnsucht der Veronika Voss / Veronika Voss. She committed suicide in 1955.)

As for the two Chaney films, I’ve seen them both.

Whether or not one appreciates his work, just about everyone would most likely agree that Lon Chaney is one of the most fascinating performers of the silent era – or of any era, for that matter. That old saying, “Don’t step on that spider! It might be Lon Chaney” doesn’t quite tell the whole story. Personally, I’d say that “Don’t step on that two-headed, hunchbacked, cross-eyed, spiked centipede with sharp fangs and a human heart! It might be Lon Chaney” would be more appropriate.

Chaney created a whole array of bizarre characters that, even though they looked as if they belonged to another world in some warped dimension, actually possessed clearly recognizable characteristics – both good and totally, utterly, vilely rotten – that belied their humanness. In both The Unholy Three and in West of Zanzibar the good-bad Chaney can be seen in all his divinely evil glory.

In the former film, Chaney plays a ventriloquist who happens to be the leader of a crime ring that also includes con-men Harry Earles (of Freaks fame, posing as a baby) and future Oscar winner Victor McLaglen. All the while, Chaney poses as a sweet and innocent grandma, owner of a pet store. Matt Moore and Mae Busch (best – and unfairly – remembered for her appearance in Stan Laurel & Oliver Hardy comedies) are the two lovebirds.

In the latter film, Chaney is a sweaty invalid wasting away in a section of the East African jungle that even the devil has forsaken, all the while degrading in every possible way poor Mary Nolan, the daughter of the man who once betrayed him and left him paralyzed from the waist down. Needless to say, Chaney’s character is in for a big surprise at the end. Also in the cast are future Oscar winners Warner Baxter and Lionel Barrymore.

Neither The Unholy Three nor West of Zanzibar is any good, and Chaney himself isn’t very good in them. Paradoxically, both must be seen. Major flaws in their respective screenplays (both are adaptations) aren’t enough to make Chaney, who shamelessly hams it up, any less hypnotic. Additionally, the Mondo Bizarro proceedings, though absurdly over the top, are equally intriguing.

Now, whenever the talkie version of The Unholy Three (1930) pops up on TCM, make sure to check it out. It’s Chaney’s only talking film, and he’s surprisingly restrained in it. In fact, the remake, directed by Jack Conway, is much better than the silent version. Also in the cast are Lila Lee, Eliott Nugent, Ivan Linow, and Harry Earles, reprising his role as the midget/cigar-smoking baby.

The West of Zanzibar remake, Kongo (1932), starring Walter Huston, Lupe Velez, Conrad Nagel, and Virginia Bruce is one of those movies that are so bad, but so bad, you can’t stop watching them over and over again. The little-known William J. Cowen is to blame for the direction.

VAMPYR! The title alone is impressive. Nothing gets even close to this masterpiece. Visually stunning is an understatement! I felt anxious after I had to sleep alone in my dark bedroom that night I watched it. Master Dreyer never disappoints. I named one of my cats Vampyro. Great article and nice site!