Here’s something unusual: hand-silkscreened Cuban posters for Vittorio De Sica’s Bicycle Thieves (right), Costa-Gavras’ Z, Ernesto Daranas Serrano’s Fallen Gods, Stanley Kubrick’s A Clockwork Orange and The Shining, Tomás Gutiérrez Alea and Juan Carlos Tabío’s Oscar-nominated Strawberry and Chocolate, and about 125 other Cuban and international films will be on display in the Academy of Motion Picture Arts and Sciences’ new exhibition “Cuban Film Posters: From Havana to the World,” beginning Friday, May 13, in the Academy’s Grand Lobby Gallery. The exhibition will run through Sunday, Aug. 28. Admission is free.

Created by artists engaged by the Instituto Cubano de Arte e Industria Cinematograficos (ICAIC), the Cuban film institute formed after the revolution of 1959, the artworks have been donated to the Academy’s Margaret Herrick Library.

As per the Academy’s press release, “the ICAIC promotes the medium of film through a range of diverse activities, including film and television production. Each year the organization also presents throughout Cuba numerous screenings of locally produced and international films, and for each film a unique poster is created by a Cuban graphic artist. These posters are then widely distributed across the country, underscoring the important role that cinema and the visual arts play in contemporary Cuban life.” [Right: Strawberry and Chocolate poster.]

In conjunction with the “Cuban Film Posters” exhibition, the Academy and the Los Angeles Film Festival will present “A Celebration of Cuban Film” on Wednesday, June 22, at 7:30 p.m. at the Academy’s Samuel Goldwyn Theater in Beverly Hills.

The Academy’s Grand Lobby Gallery, located at 8949 Wilshire Boulevard in Beverly Hills, is open Tuesday through Friday, 10 a.m. to 5 p.m., and weekends, noon to 6 p.m. The gallery will be closed for the Memorial Day (May 28 and 29) and Independence Day (July 2 and 3) holiday weekends.

Tickets to “A Celebration of Cuban Film” will be on sale beginning on Wednesday, June 1. Tickets are $5 for the general public and $3 for Academy members and students with a valid ID. (Right: poster for Fallen Gods.)

The Samuel Goldwyn Theater is located at the 8949 Wilshire Boulevard in Beverly Hills. For more information call (310) 247-3600 or visit www.oscars.org.

Hand-silkscreened Cuban posters for Stanley Kubrick’s A Clockwork Orange and The Shining, in addition to 125 other Cuban and international films will be on display in the Academy of Motion Picture Arts and Sciences’ new exhibition “Cuban Film Posters: From Havana to the World,” beginning Friday, May 13, in the Academy’s Grand Lobby Gallery. The exhibition will run through Sunday, Aug. 28. Admission is free.

The Academy’s Grand Lobby Gallery is located at 8949 Wilshire Boulevard in Beverly Hills. It is open Tuesday through Friday, 10 a.m. to 5 p.m., and weekends, noon to 6 p.m. The gallery will be closed for the Memorial Day (May 28 and 29) and Independence Day (July 2 and 3) holiday weekends.

From Lillian Gish to Monty Python. From Judy Garland and Mickey Rooney to Harrison Ford and Rutger Hauer. From Audie Murphy in the Civil War to Elvis Presley in concert. All that – and more – is what’s in store at the Library of Congress’ Packard Campus in Culpeper, VA, in May 2011.

Highlights include Glenn Ford trying to tame dangerous savages, among them Sidney Poitier and Vic Morrow, in The Blackboard Jungle (1955), Richard Brooks’ well-intentioned and quite sensational look at an inner-city school; Harrison Ford dueling it out with Rutger Hauer in Ridley Scott’s Blade Runner (1982), set in a futuristic Los Angeles where the drab Santa Ana Winds never blow; and Victor Sjöström’s The Wind (1928), one of the most remarkable silent films ever made, starring Lillian Gish, Lars Hanson, and the Santa Ana Winds (or equally arid, asthma-inducing facsimile).

Also notable are Gregory La Cava’s So’s Your Old Man (1926), in which the great Alice Joyce – a top performer in the 1910s, and perhaps the only early female star to undergo a resurgence in the 1920s – supports W.C. Fields, and Paul Fejo’s Lonesome (1928), considered by many one of the greatest silents ever made (along with The Wind, I’m sure).

Lonesome is also notable in that the film’s leading lady, Barbara Kent, is still alive. Kent, in fact, is the very last surviving adult Hollywood performer of the silent era. She turned 104 last December 16.

All shows are free, but children twelve and under must be accompanied by an adult. The theater is at the Library of Congress Packard Campus for Audio Visual Conservation located at 19053 Mt. Pony Rd. in Culpeper, VA. Reservations are encouraged and can be made one week in advance (for Saturday shows the previous Friday.) Call the information line at (540) 827-1079 ext. 79994 or (202) 707-9994 Monday through Friday from 9:00 am to 4:00 p.m. Reservations are held until ten minutes before show time.

The theater lobby will open 45 minutes before show time. Most programs are preceded by an informative slide presentation about the film and music selected by the Recorded Sound Section of the Library of Congress. Short subjects will be presented before select programs. Titles are subject to change without notice. 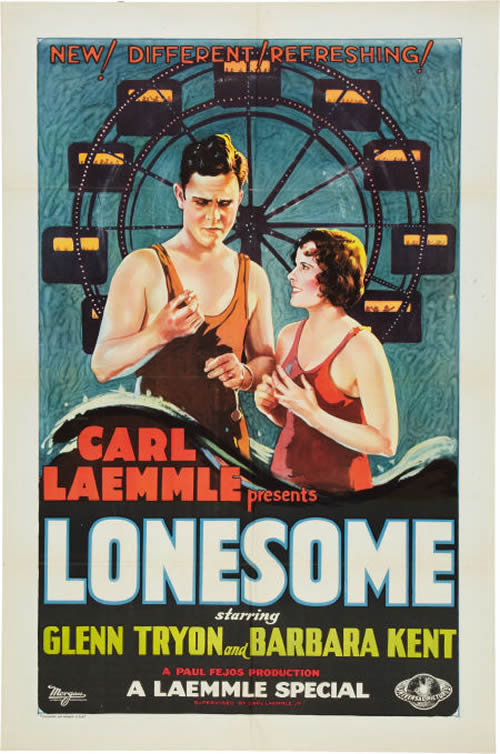 Musical accompaniment for “The Wind” and “So’s Your Old Man” will be performed live on the theater’s majestic (digital) Rodgers theatre organ by Ben Model.

Schedule and synopses from the Packard Campus press release:

Thursday, May 5, 7:30 p.m.
BABES IN ARMS (MGM, 1939)
Mickey Rooney and Judy Garland put on a show in this Oscar-nominated musical directed by Busby Berkeley.

Friday, May 6, 7:30 p.m.
BLADE RUNNER (Warner Bros., 1982)
In this Science Fiction thriller, an ex-cop comes out of retirement to hunt down androids who are being reproduced for the purpose of slavery. Directed by Ridley Scott and starring Harrison Ford, Rutger Hauer and Sean Young. Rated R. Selected for the National Film Registry in 1993.

Saturday, May 7, 2:00 p.m.
SLEEPING BEAUTY (Walt Disney-Buena Vista, 1959)
Walt Disney’s animated classic of the fairy tale about an evil witch who places a curse on an infant princess and the three good fairies who spirit her away to protect her. Directed by Clyde Geronimi with voices provided by Mary Costa, Bill Shirley and Eleanor Audley.

LONESOME (Universal, 1928)
Hungarian-born filmmaker and scientist Pál Fejös directed this romance about young lovers who become separated during the chaos of a thunderstorm at Coney Island. This film, notable for its early use of dialogue and two-color Technicolor, stars Barbara Kent and Glenn Tryon. Selected for the National Film Registry in 2010.

Saturday, May 21, 7:30 p.m.
ELVIS: THAT’S THE WAY IT IS (MGM, 1970)
Concert and backstage footage of The King at the height of his Vegas phase. Elvis Presley stars in this feature documentary directed by Denis Sanders.

Thursday, May 26, 7:30 p.m.
THE RED BADGE OF COURAGE (MGM, 1951)
Audie Murphy and Bill Mauldin star in John Huston’s adaptation of Stephen Crane’s story of a boy coming of age during the Civil War. Part of The Civil War @ 150, our ongoing series of film programs commemorating the War Between the States.

Photos: Courtesy of the Library of Congress.

Not So Amazing Tales from the Archives: Digital Era

Thank you for allowing us see a little piece of Cuba.
We want to see more..
very needed after 50 years of a nonsense blockade!!
Congratulations!!

Great exhibition. We are selling most of the Cuban posters shown at this exhibition. Check out our website http://www.cubafilm.nl