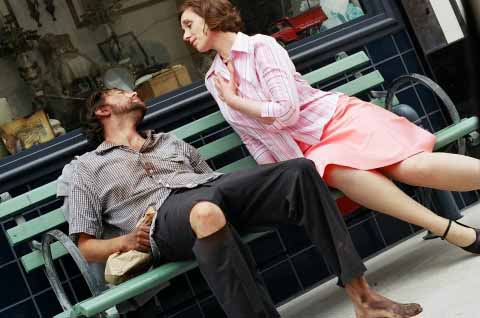 Molly Beck Ferguson sings for homeless man William Fiala, who also happens to be the co-director of Cubicle: The Musicle

I’ve known Tibor Szakaly for a couple of years. Each time I’d see him after French class at a language school in Beverly Hills, he would tell me about the making of his and William Fiala’s musical short Cubicle: The Musicle.

About a year later, Cubicle was screened for a group of Tibor’s and Fiala’s friends, in addition to assorted film professionals. I missed that first screening, but I did get to watch Cubicle on DVD. I found it a clever, enjoyable quasi-satirical take on old Hollywood and Broadway musicals, in which drab, mundane reality is transformed into a vibrant parallel universe where people sing and dance in the unlikeliest of places – without being forcibly transported to a mental institution – and, of course, find True Love before the final fadeout.

In Cubicle, Molly Beck Ferguson plays a singing-and-dancing temp whose biggest dream in life is to become a permanent employee. The ambitious young woman, however, spends her office hours belting out songs instead of sharpening pencils. Needless to say, she is fired from her temp assignment – but, surprise!, she eventually discovers that love (in the person of Stephen Simon) is just around the cubicle.

The Cubicle co-directors have kindly agreed to answer a few informal questions about the making of their all-singing, all-dancing short. See below.

Photos are courtesy of Tibor Szakaly and William Fiala ©.

“Cubicle: The Musicle.” Who came up with that idea? And how? Were there any Broadway or film musicals that inspired it?

Tibor: Cubicle is Bill [Fiala]’s idea and script. Bill had just finished dismembering a corpse from an unfortunate hit-and-run when he thought, “I would like to do a musical about temp workers!” We watched some musicals, my favorite being Pas sur la bouche [2003], a musical by Alain Resnais, and realized, we can’t afford this…

Fiala: But we could afford something 12 minutes long. So I called up Tibor, he brought his wood chipper, we disposed of the rest of the body. 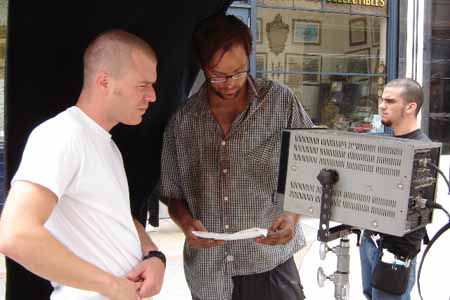 Could you tell us a little bit about your filmmaking backgrounds?

Tibor: I studied at Emerson College in Boston, worked at an animation studio, and moved to LA. I knew Bill from Boston, and we decided to make some films together.

Fiala: I too went to Emerson College as did our Lead Actress Molly.

What would you say was the biggest challenge in getting this musical short off the ground?

Tibor: The biggest challenge was finding the right composer and choreographer. Our composer, Charles Fernandez, was an amazing find. The music was so good, I would wake up in the middle of the night with the song in my head. [As for choreographer] Mark ‘Swany’ Swanhart, someone recommended him to Bill.

Fiala: Yes, I bitched and moaned about the lack of a choreographer and my friend said his friend knew one. One that actually worked with Baz Luhrmann on the L.A. stageing of La Bohème. We were lucky to have both Chuck and Swany. 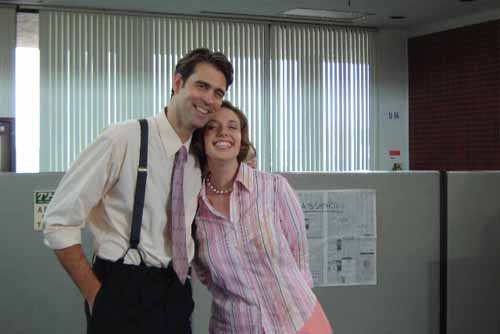 The voices we hear. Are those the actors singing? Where did you find your performers?

Tibor: Those are the voices of the leads. We recorded the leads in advance, then later rerecorded them. The chorus we just had some singers come in.

Fiala: It is funny about the singers. Originally, it was a male lead and we cast Molly first in the role of the love interest. And we brought in people to audition for the lead. But one of our possible composers suggested that we switch, and Tibor thought that was a good idea. I resisted, but eventually gave in before Tibor punched me again.

Tibor: I did pull my punches…

What is it like to make short films nowadays? What sort of exposure do you expect for “Cubicle: The Musicle”?

Tibor: Bill and I are lucky because we have connections and friends who help, making it easier to make a short. As for exposure, we are submitting it to festivals.

Fiala: I think that unless you like making short films it would be horrible. But we actually like it!

Tibor: The only drawback is [that] because so many people help us for free or very little money … it does take us as long as a feature … or even longer…

Where can we get to see “Cubicle: The Musicle”?

Tibor: Keep an eye out for those festivals … or ask your local congressman.

Fiala: We will be posting festival screenings on our website, which is almost active – 7engine7.com.

And finally, do you have any other film projects in the works?

Tibor: “Godzilla vs Gandhi.” Due to budget [constraints], it will be done with sock puppets – but with clean socks!

Fiala: The Godzilla sock will be that green color so we can key in a real big sock later.

Tibor: Unfortunately, we keep setting fire to the Godzilla sock. I guess soaking the sock in kerosene isn’t a good idea…