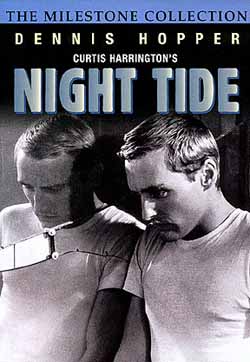 Curtis Harrington, best known as the director of numerous stylized horror films, died on Sunday evening, May 6, at his Hollywood Hills home. Harrington had never fully recovered from a stroke he suffered in 2005. He was 80.

Born in Los Angeles on Sept. 17, 1926, Harrington grew up in Beaumont, Calif. His first cinematic endeavors were amateur films he made while still a teenager. One of those, the 16mm Fragment of Seeking, acquired a certain reputation in the ensuing years.

He attended Occidental College and UCLA, and earned a film studies degree from the University of Southern California in 1947. While spending time in Paris, he wrote a monograph on Josef von Sternberg – best remembered for his highly stylized vehicles for Marlene Dietrich – which was published by the British Film Institute.

Shortly thereafter, Harrington became associated with the experimental American cinema of the time, working in various capacities with the likes of Kenneth Anger – whom Harrington would later refer to as “bad news” – in the shorts Puce Moment (1949) and Inauguration of the Pleasure Dome (1954).

It was around that time that he became acquainted with James Whale, the director of several Universal horror films of the 1930s, including Frankenstein and Bride of Frankenstein. Harrington, in fact, has been credited for helping to rescue what may well be Whale’s best film, the Gothic horror-comedy The Old Dark House.

Harrington took a more mainstream route in the mid-1950s, when he started working as an assistant for producer Jerry Wald at 20th Century Fox. During a sabbatical in 1960, he directed his first feature film, Night Tide (released in 1961), which gave Dennis Hopper his first leading role – after Hopper’s film career had stalled and before Easy Rider temporarily jumpstarted it.

“I asked Dennis to be in [Night Tide] because he was very much a part of the avant-garde scene in Southern California, and he told me he’d really admired my short films,” Harrington told the Sarasota Herald-Tribune in 1998.

In the film, Hopper believes that a carnival mermaid (Linda Lawson) is the real thing – one with a murderous bent. The unusual effort was recognized in some critical circles, with the New York Times calling Night Tide “an eerily poetic mood piece.”

In the 1960s, Harrington became one of the protégés of Roger Corman, the producer and director known as “King of the Bs.” The results of that collaboration were Voyage to the Prehistoric Planet (1965), which Harrington also wrote, and Queen of Blood (1966), both with a long-past-his-prime Basil Rathbone.

Someone somewhere must have admired those films, for Harrington’s next entry was the considerably more prestigious Games (1967), starring Academy Award winner and French icon Simone Signoret as a mysterious woman who intrudes upon the lives of kinky couple James Caan and Katharine Ross.

Despite positive notices, Harrington didn’t direct any more movies until the made-for-TV How Awful About Allan, which was broadcast in 1970. In the film, Anthony Perkins plays a mentally disturbed man (what else?) who may – or may not – be hearing voices from the Beyond.

That was followed by the 1971 Baby Jane-esque melodrama What’s the Matter with Helen?, about two dance teachers eking out a living in 1930s Hollywood. Though no masterpiece, the film offered Debbie Reynolds what may well have been the best dramatic role of her career. (Shelley Winters, on the other hand, was allowed to gobble up the scenery.)

That same year, Shelley Winterss’ psycho mother in the British-made Whoever Slew Auntie Roo? starts looking for a replacement for her dead daughter, but ends up doing her bit for population control by murdering children wherever she goes.

In The Killing Kind (1973), Harrington – with the help of screenwriter George Edwards (who provided the story for Games) – once again focuses on psychopaths, with John Savage as Terry Lambert, a man who, according to the film’s tagline, “loved soft, furry, little animals. He loved his mother. He loved pretty girls…ALL DEAD!”

Harrington once told me that Ann Sothern – who plays Terry Lambert’s beloved mom – was one of two performers he didn’t like working with, remarking that the veteran actress did her best to upstage her more inexperienced co-star. (The other performer in Harrington’s black list was Eleanor Parker, whom he found hard to handle while working as an associate producer on the dreadful 1961 melodrama Return to Peyton Place.)

Ruby (1977), Harrington’s last feature film of the 1970s – co-written by George Edwards – was a rehash of some the themes found in the much more successful Carrie (1976), what with psychics, malefic forces, horrible deaths, and Piper Laurie.

Harrington’s other TV movies tended to be equally sensational. In Killer Bees (1974), Kate Jackson and Edward Albert Jr., are at odds with matriarch Gloria Swanson and zillions of mean-spirited bees, while in Devil Dog: The Hound of Hell (1978), Harrington offers a German shepherd possessed by none other than Satan. Needless to say, death and dismemberment follow.

Somewhat less horror and mayhem could be found in the episodes Harrington directed for several TV series, including Charlie’s Angels, Baretta, and Dynasty.

After a long hiatus, Harrington returned with the little-seen Usher (2002), a 38-minute version of Edgar Allan Poe’s Fall of the House of Usher, a tale he had already adapted in his very first amateur short nearly six decades earlier. (Perhaps appropriately, Time magazine had once called him “Poe with a megaphone.”)

In Usher, Harrington also appears as an actor, playing two roles – siblings Roderick and Madeline Usher. Referring to the film as stylistically “old fashioned,” film historian Anthony Slide stated that it “doesn’t come across as camp at all.”

Usher has been screened at several festivals and had a brief commercial run in Manhattan in 2005. “If Usher is stilted,” wrote Jeannette Catsoulis in the New York Times, “it is also quite touching, and if Mr. Harrington’s acting is less than natural, it’s completely in line with the standards of the genre. Vincent Price was no Olivier either.”

Throughout his career, Harrington always made a point of casting film veterans in his productions. In addition to the aforementioned Basil Rathbone, Debbie Reynolds, Shelley Winters, Gloria Swanson, Ann Sothern, and Piper Laurie, other old-timers who found themselves – for better or for worse – listed in the credits of Harrington’s films were Gavin Muir (in Night Tide); Faith Domergue (in Voyage to the Prehistoric Planet); Estelle Winwood and Marjorie Bennett (in Games); Julie Harris (in How Awful About Allan); Agnes Moorehead (in What’s the Matter with Helen?); Ralph Richardson, Rosalie Crutchley, and Hugh Griffith (in Whoever Slew Auntie Roo?); Ruth Roman and Luana Anders (in The Killing Kind); and Gale Sondergaard, Keye Luke, David Hedison, John Carradine, and Stuart Whitman (in the made-for-TV The Cat Creature, 1973).

Although Harrington’s films usually followed a certain thematic pattern, visually and stylistically they were quite dissimilar. Unlike other directors who dabbled in the psychological horror genre – say, Dario Argento or Brian DePalma – Harrington never quite developed his own unique, instantly recognizable cinematic style.

His taste in morbid plots and psychopathic characters, however, remained consistent throughout the decades.

“I have a very macabre turn of mind and there’s no way that can be explained,” Harrington once told the magazine Filmmaker. “It’s just a leaning I’ve had since childhood, and I have it to this day.”

You obviously have not seen “Whoever Slew Auntie Roo?”

The title character killed no one.
Her daughter died falling off the bannisters, and Roo was killed by the children she kidnapped with the hope of keeping them.
The kids thought they were going to be murdered but it was a misunderstanding.

I sure hope that “The Cat Creature” and other equally little-known Harrington titles will see the light of day on TCM and/or on DVD.

Wonderful filmmaker who never bores. One of my favorites, the television feature “CAT CREATURE” deserves a dvd release-for myself I’d love to find an excellent copy- perhapes TCM will screen it or at least Cinemax or Encore.