Cyd Charisse: Singin’ in the Rain + The Band Wagon Actress-Dancer 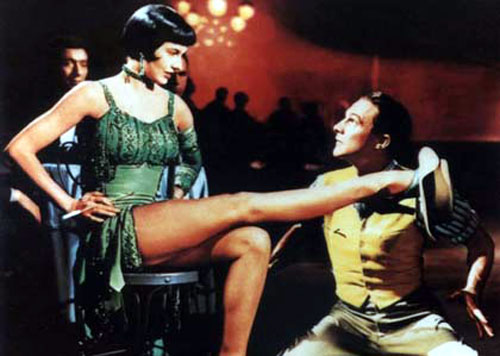 Cyd Charisse, the long-legged dancer of about a dozen MGM musicals, died today at the Cedars-Sinai Medical Center in Los Angeles. Charisse, who was 86 (or 87, depending on the source), had suffered an apparent heart attack yesterday.

When most people think of Hollywood’s greatest dancers, Fred Astaire and Gene Kelly are the two names that come to mind. I’m not most people.

When I think of cinema’s greatest dancers, Ann Miller, Eleanor Powell, and Cyd Charisse come to mind. As far as I’m concerned, those three were as accomplished as – if not more accomplished than – their male counterparts, and even more importantly, I always found them more exciting to watch. They had great legs, great smiles, and great charm, and each excelled in different dance styles: Miller was exuberant, Powell was acrobatic, and Charisse, who had been trained as a ballerina in the Russian tradition, was both classy and sexy.

Charisse and Miller, for instance, make Ricardo Montalban all but disappear while doing a fiery Mexican dance in the Kathryn Grayson-Frank Sinatra vehicle The Kissing Bandit (1948). All by herself, Charisse makes Gene Kelly totally disappear when she bares her legs in Singin’ in the Rain, and she – more than partner Fred Astaire – helps to make the long “Dancing in the Dark” ballet in The Band Wagon (1953) my favorite dance number of the studio era.

Cyd Charisse was born Tula Ellice Finklea on March 8, 1922 (or 1921), in Amarillo, Texas. After developing a mild case of polio, she began taking ballet lessons at the age of 6. As a teenager, she was enrolled in ballet classes in Hollywood, and later joined the Ballet Russe dance company.

In 1939, she eloped with one of her dance teachers, Nico Charisse. Their marriage ended in divorce in 1947, and the following year Charisse married Alice Faye’s former husband Tony Martin. (“Cyd” is a variation of her nickname, “Sid”).

In 1946, she signed with MGM, where she became a popular player in the studio’s glossy Technicolor musicals. In addition to the aforementioned The Kissing Bandit, Singin’ in the Rain, and The Band Wagon, Charisse danced opposite Gene Kelly in Brigadoon (1954) and It’s Always Fair Weather (1955); and opposite Fred Astaire in Rouben Mamoulian’s Silk Stockings (1957), a Ninotchka remake with Charisse in Greta Garbo’s original role of the Soviet envoy.

“If I had to give up either acting or dancing,” Charisse declared in a December 1952 interview with the Saturday Evening Post, “I’d choose to keep dancing.” A smart decision, considering that her acting was at best (barely) passable.

In her early films, she played a couple of “exotic” types in undemanding roles – Fiesta (1947), as Ricardo Montalban’s fiancee, and the Esther Williams vehicle On an Island with You (1948), as a Polynesian. Later in her career, she went dramatic in Joseph Pevney’s Twilight for the Gods (1958), opposite Rock Hudson, and Nicholas Ray’s Party Girl (1958), opposite Robert Taylor, but audiences and critics were unimpressed.

Both her stardom and her MGM contract ended at that time. Apart from sporadic film appearances in the 1960s – e.g., Five Golden Hours (1961), playing a baroness; Vincente Minnelli’s Two Weeks in Another Town (1962); the Matt Helm flick The Silencers (1967), starring Dean Martin – Charisse’s show-business career was reduced to cabaret shows with Tony Martin.

In the ensuing decades she had guest spots in a number of TV series, including Hawaii Five-0, The Fall Guy, Frasier, and, inevitably, The Love Boat and Murder She Wrote.

She also performed onstage, in Charlie’s Girls in London in the 1980s and in Grand Hotel – as the ballerina (another Garbo role) – on her Broadway debut in 1992.

The first time I ever saw Cyd Charisse was in a Janet Jackson video for her song “Alright” in which Cyd Charisse, The Nicholas Brothers, and Cab Calloway had some wonderful cameo appearances. Years later when I started watching musicals I was truly awed by Cyd in Brigadoon. The “Heather on the Hill” number was beautiful (although utterly setbound) and Cyd Charisse was marvelous. Cyd was as close as the cinema ever came to having Maria Tallchief.