One of the best-looking and most underrated actors of the studio era, Dana Andrews was a first-rate film noir/crime thriller star. Oftentimes dismissed as no more than a “dependable” or “reliable” leading man, in truth Andrews brought to life complex characters that never quite fit into the mold of Hollywood’s standardized heroes – or rather, antiheroes.

Unlike the cynical, tough-talking, and (albeit at times self-delusionally) self-confident characters played by the likes of Alan Ladd, Edward G. Robinson, James Cagney, Humphrey Bogart, and, however lazily, Robert Mitchum, Andrews created portrayals of tortured men at odds with their social standing, their sense of ethics, and even their romantic yearnings.

Not infrequently, there was only a very fine line separating his (anti)heroes from most movie villains. At times, there was no line at all.

Something else that made Dana Andrews unusual: unlike Hollywood’s more sociopathic antiheroes, his characters would often find themselves ravaged by guilt, fear, and self-doubt. One such is found in Otto Preminger’s far-fetched but entertaining psychological crime drama Where the Sidewalk Ends, in which Andrews plays a law-and-order-obsessed New York City cop who also happens to be a guilt-ridden, fear-consumed killer and all-around lawbreaker.

Even in something like Walter Lang’s – shockingly enjoyable – all singing, all romancing, all corn-fed, Technicolor musical State Fair, is Andrews’ somewhat jaded Des Moines journalist ever positive he is the right guy for bright-eyed Iowan farm girl Jeanne Crain?

On Jan. 21, Turner Classic Movies is presenting four crime dramas starring Andrews: the 20th Century Fox releases Fallen Angel (1945) and Boomerang! (1947), and the RKO releases While the City Sleeps (1956) and Beyond a Reasonable Doubt (1956).

Never a top box office draw, Dana Andrews (born Carver Dana Andrews on Jan. 1, 1909, in Covington County, Mississippi) moved to Los Angeles – with Hollywood in mind – in 1931. He would remain a struggling actor for the rest of the decade, appearing in his first movie at age 31 in 1940. It would take another four years for him to reach stardom; the film that did it was Otto Preminger’s 1944 noir mystery Laura, costarring Gene Tierney as the title character.

In Laura, Andrews plays the cigarette-chewing police detective who, underneath his tough façade, is terrified that he may have fallen madly in love with a dead woman. Worse yet, once Laura returns from the dead (in truth, from her wifi-less country house), suspicion arises that she is the cold-blooded murderer the police have been looking for. What’s a poor, lovestruck cop to do? 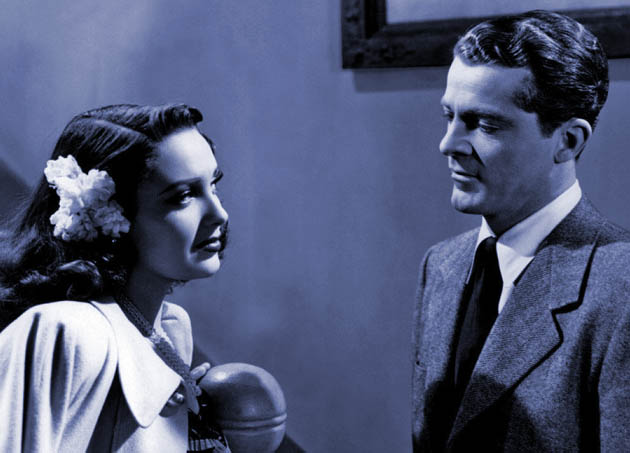 The year after Laura, Andrews romanced Jeanne Crain in State Fair; roamed the Italian countryside looking for a bridge to blow up in Lewis Milestone’s well-regarded World War II drama A Walk in the Sun; and found himself a suspect in the murder of waitress Linda Darnell in Fallen Angel, which reunited the actor with Laura director Otto Preminger, cinematographer Joseph LaShelle, and composer David Raksin.

Hardly as well remembered as its Preminger-Andrews predecessor, Fallen Angel stars top-billed Alice Faye[1] as a woman who marries Dana Andrews’ scheming drifter: he wants the pretty blonde’s money so he can woo and wow Linda Darnell’s sultry brunette.

Fallen Angel features shades of the previous year’s Double Indemnity and of the following year’s The Postman Always Rings Twice, with Andrews in a sort of male version of the Barbara Stanwyck and Lana Turner roles – except for the fact that it’s not the wife who gets bumped off, but the prospective mistress.

Boomerang! is notable as the other 1947 movie directed by Elia Kazan: the better-remembered one – the anti-Semitism drama Gentleman’s Agreement, starring Gregory Peck and Dorothy McGuire – ended up winning that year’s Best Picture Academy Award, in addition to earning Kazan the Best Director Oscar statuette.

Based on the true story of a Bridgeport, Connecticut, priest shot dead, Boomerang! – filmed on location in another Connecticut town, Stamford – follows in semi-documentary style (with narration by actor Reed Hadley) that most precious of creatures: a district attorney (Dana Andrews, here on the side of Righteousness) who, professional expediency or no, wants to make sure he will be prosecuting the actual murderer – and not the likely innocent man (Arthur Kennedy) the (inept, abusive, corrupt) police have thrown into his hands.

‘While the City Sleeps’

Fritz Lang, whose thriller/film noir credits range from the German-made M and The Testament of Dr. Mabuse to Man Hunt, The Woman in the Window, and Scarlet Street, directed two 1956 releases starring Dana Andrews: While the City Sleeps and Beyond a Reasonable Doubt.

Not a remake of the 1928 Lon Chaney silent thriller of the same name, While the City Sleeps was adapted by Casey Robinson (Kings Row, Now Voyager) from the novel The Bloody Spur by Charles Einstein – who happens to be the half-brother of actor Albert Einstein (better known as Albert Brooks).

Despite spending most of While the City Sleeps either drunk or on his way there, Andrews’ TV celeb journo – a remarkably effective performance – also spends most of the film racked by guilt. After all, in order to help to catch “The Lipstick Killer” he unceremoniously endangers the life of the young woman he loves (Sally Forrest). 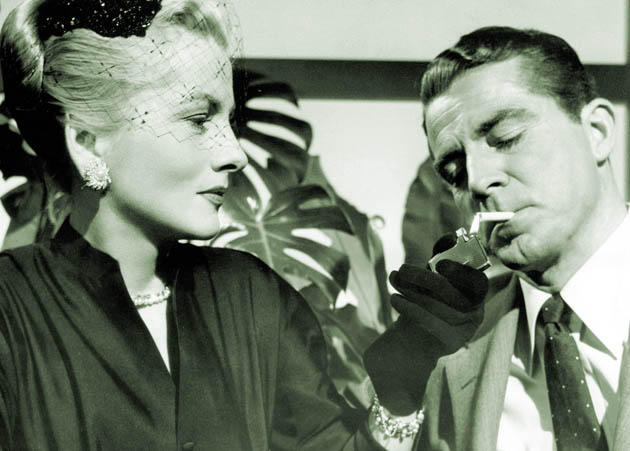 ‘Beyond a Reasonable Doubt’

In Beyond a Reasonable Doubt, veteran Sidney Blackmer (The Count of Monte Cristo, In Old Chicago) is a newspaper publisher out to prove that the concept of “circumstantial evidence” is misused in the U.S. justice system. Son-in-law Andrews is thus convinced to allow himself to be – circumstantially – framed for a murder. Needless to say, things don’t go quite as expected.

Dana Andrews died of pneumonia at age 83 on Dec 17, 1992, at the Los Alamitos Medical Center in Orange County, California. He had been suffering from Alzheimer’s disease for several years.

[1] Fallen Angel is notable not only for its Laura connections but also because it marked the end of Alice Faye’s stardom. A 20th Century Fox contract player since the mid-1930s, Faye was one of the studio’s biggest box office attractions.

Prior to Fallen Angel, she had clashed with Fox mogul Darryl F. Zanuck after demanding to star in only one movie per year. Otto Preminger’s crime drama was her 1945 vehicle, as Faye had insisted on being cast in it (instead of the previously announced Ida Lupino and Anne Baxter)* as a break away from sing-songy Technicolor fluff like That Night in Rio, Hello Frisco Hello, and The Gang’s All Here.

She is also supposed to have been responsible for Dana Andrews getting cast as her leading man.

Angered by Zanuck’s decision to leave on the cutting-room floor some of her key dramatic scenes and her singing rendition of the song “Slowly,” Faye quit Fox at that time despite owing the studio two more movies. She would remain away from the screen for 17 years, returning in a supporting role in José Ferrer’s ineffectual 1962 remake of State Fair at her old alma mater. (Since the mid-1950s working as an independent producer, Zanuck coincidentally returned to his old Fox post that same year.)

Apart from a cameo in Michael Winner’s all-star Won Ton Ton: The Dog Who Saved Hollywood, Alice Faye would have only two other movie roles, both in little-seen 1978 releases: Michael Hyatt’s Every Girl Should Have One (along with fellow old-timers Zsa Zsa Gabor and Robert Alda) and Don Chaffey’s The Magic of Lassie (along with fellow old-timers Mickey Rooney, James Stewart, and Mike Mazurki).

* Joan Fontaine had also been announced as a possibility for one of the two female leads.