Singer and sometime actor David Bowie, one of the iconic figures of the English-language music scene of the second half of the 20th century, died of cancer yesterday, Jan. 10. Bowie (born David Robert Jones in the London suburb of Brixton) had turned 69 on Jan. 8. His son, filmmaker Duncan Jones (Moon), has confirmed Bowie’s death on Twitter.

Bowie was seen in only a couple of dozen movies during his four-decade show business career. Listed below are four of his most notable film roles.

The Man Who Fell to Earth: The return of Ziggy Stardust

Directed by Nicolas Roeg (Walkabout, Don’t Look Now) from a screenplay by Paul Mayersberg (based on a novel by Walter Tevis), The Man Who Fell to Earth (1976) stars Bowie in the title role: a humanoid extra-terrestrial who “falls” to Earth in order to ship water to his drought-stricken planet. It’s surely no coincidence that at the time Bowie was best known for the 1972 album The Rise and Fall of Ziggy Stardust and the Spiders from Mars, with Ziggy Stardust as the singer’s androgynous alter ego.

Although a cult movie classic today, upon its release U.S. film reviewer Roger Ebert wasn’t particularly impressed with The Man Who Fell to Earth, writing, “Here’s a film so preposterous and posturing, so filled with gaps of logic and continuity, that if it weren’t so solemn there’d be the temptation to laugh aloud. And yet, at the same time, this is a film filled with interesting ideas – it’s like a bunch of tentative sketches for a more assured film that was never made.”

Also in The Man Who Fell to Earth cast: Rip Torn, Candy Clark, and Buck Henry.

Just a Gigolo: 32 Elvis movies in one

Set in post-World War I Berlin, Just a Gigolo (1978) was a peculiar critical and box office bomb that seemingly tried – and failed – to replicate the success of Bob Fosse’s Cabaret. Bowie starred as Paul Ambrosius von Przygodski, an ex-military man who, perhaps inspired by Guy de Maupassant’s Bel Ami, decides to become the companion of lonely, wealthy women for a living.

Actor-turned-director David Hemmings (Blow-up) handled an eclectic cast that included not only himself but also Sydne Rome; veterans Kim Novak, Curd Jürgens, and Maria Schell; and, in her final film role, Marlene Dietrich.

I love Hemmings. He’s a terrific fella, and I fell for that. He’s wonderful and a great talker (laughs). Listen – you were disappointed, and you weren’t even in it. Imagine how we felt. Really, it was such a shame. I can only say that David and I are still great friends and we know what we did. We’ll never work together again. Friendship was saved, if nothing else.

Fortunately it’s been so long now that I don’t feel so uptight when I talk about it, but the first year or so after I’d made the thing I was furious, mainly with myself. I mean, oh God, I really should have known better. Every real, legitimate actor that I’ve ever met has told me never to even approach a film unless you know the script is good. If the script isn’t any good, then there’s no way a film is going to be good.

In that same interview, Bowie refers to Just a Gigolo as “my 32 Elvis Presley movies contained in one.”

In Tony Scott’s The Hunger (1983), adapted by Ivan Davis and Michael Thomas from Whitley Strieber’s novel, Bowie and Catherine Deneuve play two hip, stylish vampires out to remain as hip and stylish – and as youthful – as vampirily possible. In other words, they kill people indiscriminately to suck on their blood.

Everything is going well until the male vampire starts suffering from insomnia, eventually going the way of Margo in Frank Capra’s Lost Horizon. In desperation, he tries to get help from an attractive American gerontologist, Susan Sarandon, but she ends up seducing and being seduced by Deneuve. Sultry lesbian sex ensues, which doesn’t help the fast-aging vampire any.

Bowie, who took on the role so as to work with Sarandon (“pure dynamite”), told Rolling Stone, “I must say, there’s nothing that looks like it on the market. But I’m a bit worried that it’s just perversely bloody at some points. I’m not sure I can take any of that anymore.”

Deservedly so, as The Hunger is a cinematic rarity: expertly made, slick without being superficial, effortlessly cool. 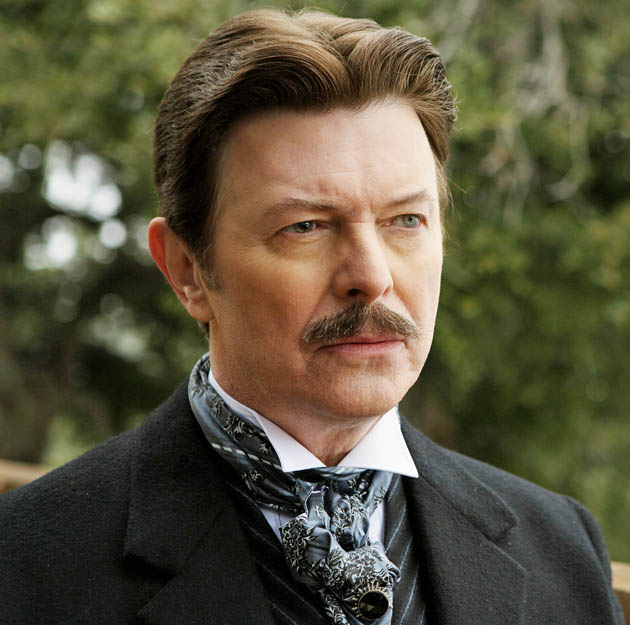 The Prestige: Unrecognizable David Bowie – as Nikola Tesla – is highlight of gimmicky movie

All but unrecognizable at age 59, David Bowie was a flawless Nikola Tesla – the visionary inventor – in Christopher Nolan’s otherwise gimmicky The Prestige (2006), based on a 1995 novel by Christopher Priest, and starring Hugh Jackman and Christian Bale as immortal – or rather, as seemingly immortal – magicians/tricksters.

Bowie’s few scenes as Tesla made the goings-on in this over-produced early 21st-century release feel like something genuinely set in the late 19th century. Not only a remarkable feat, but an astonishing one as well, considering that Bowie’s show-biz persona always seemed to be (way, way) ahead of its time.

Other notable David Bowie films include the following:

David Bowie was last seen on the big screen – in a cameo as himself – in Todd Graff’s Bandslam (2009), a teen musical featuring Vanessa Hudgens.

Songs in 450 movies and TV productions, ‘The Elephant Man’

As found on the IMDb, David Bowie’s songs were heard in more than 450 movies and television productions, ranging from D.A. Pennebaker’s documentary Ziggy Stardust and the Spiders from Mars (1973) and Uli Edel’s 1981 German drug addiction drama Christiane F. (in which Bowie makes a cameo appearance as himself) to the Julia Roberts hit Pretty Woman (1990), Roland Emmerich’s 1998 Godzilla reboot, and the TV series Friends, Buffy the Vampire Slayer, and Ugly Betty.

‘No’ to the knighthood

Also worth noting, David Bowie – unlike former rebels Mick Jagger, Elton John, and Paul McCartney – turned down a knighthood in 2003, declaring, “I would never have any intention of accepting anything like that. I seriously don’t know what it’s for. It’s not what I spent my life working for.”

And last but certainly not least, one can’t ignore David Bowie openly proclaiming, “I’m gay, and always have been, even when I was David Jones” – back in Jan. 22, 1972, issue of the British pop/rock music weekly newspaper Melody Maker.

Putting things a bit in context: Gay sex had been legalized in the United Kingdom a mere five years earlier, and at that time remained illegal in places like Saudi Arabia and California. (Still illegal in the former and, gay marriage or no, it can still get you in trouble with the “authorities” in the former and in countless other U.S. states.)

Later on, Bowie would label himself “bisexual,” remaining one of the rare male show business superstars to openly deviate from the heterosexist “public persona” norm.

David Bowie quote re: “raging queens or transvestites or martians” found in the 2001 edition of Leslie Halliwell and John Walker’s Halliwell’s Who’s Who in the Movies.

Image of David Bowie as Nikola Tesla in The Prestige: Warner Bros.