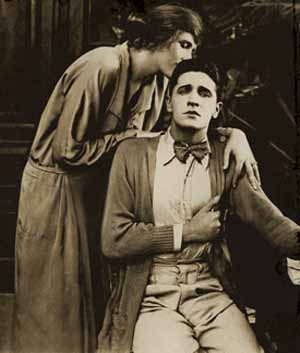 Between Oct. 25–28, Aberystwyth’s National Library of Wales and the Aberystwyth Arts Centre will host the newly created film festival Fflics – Wales Screen Classics. Fflics will screen about 30 silent and sound films from the “nitrate era” – the 1890s to the early 1950s – created by or featuring Welsh talent, or depicting different facets of Welsh life.

Say what you will about How Green Was Valley – the film that beat the revered Citizen Kane at that year’s best picture Oscar race – but Arthur Miller’s cinematography is nothing short of superb.

Though better known for his stage work than for his movies, Cardiff-born Ivor Novello actually starred in quite a few motion pictures in the 1920s and early 1930s. (The Fflics website calls him “Britain’s biggest male box office star” of the ’20s.) Two little-seen Novello films will be shown at Fflics: Louis Mercanton’s French-made “tale of illicit romance and tragedy,” L’Appel du sang / Call of the Blood (above, 1919), which marked the actor’s film debut, and Graham Cutts’ The Rat (1925), which is based on a play by Constance Collier – and which sounds quite a bit like Alfred Hitchcock’s To Catch a Thief. Mae Marsh, the heroine of numerous D.W. Griffith films, co-stars. (Marsh and Novello had previously worked together in Griffith’s The White Rose in 1923.)

Among other festival highlights is a screening of British pioneer Maurice Elvey’s long-thought lost The Life Story of David Lloyd George (1918), with live musical accompaniment by Neil Brand, hailed as “one of the world’s great silent movie pianists.”

According to Berry, this controversial portrayal of David Lloyd George (played by Norman Page, above), Britain’s (Welsh) prime minister during World War I, “must rank as among the most ambitious and accomplished British films of the silent years. It certainly boasts the most bizarre and ill-fated history[:] vanished for 76 years [it was confiscated for political reasons] and was re-discovered by the Wales Film and TV Archive in 1994 and later dubbed by film historian Kevin Brownlow ‘the find of the century.’” This epic’s running time is a long 152 minutes.

Another important screening is that of Proud Valley (1940). Directed by the independent-minded Pen Tennyson, who campaigned for the nationalization of the British film industry, and starring Paul Robeson, Proud Valley deals with labor relations and – tangentially – with the issue of racism in the Welsh mines.

The closing night film is Michael Powell and Emeric Pressburger’s wartime drama The Life and Death of Colonel Blimp (1943), one of the few Powell/Pressburger films I haven’t seen, and which stars Welsh actor Roger Livesey as said Colonel. Livesey is hardly one of my favorite performers – Berry appropriately describes him as “fruity-voiced and nasal” – and the same goes for co-star Anton Walbrook. Leading lady Deborah Kerr, however, is one of the very best.

Another good thing going for Colonel Blimp: Winston Churchill tried to “quash it or veto its export lest it affect the morale of soldiers and would-be recruits.” It’s always a good sign whenever politicians – or any special interest group – try to ban or censor a work of art or any creative endeavor, especially when the work in question is considered detrimental to either a people’s morals or a people’s morale.

Unfortunately, I can’t make it to Wales in the next couple of weeks, but I’ll try to catch The Life and Death of Colonel Blimp on DVD. And here’s hoping that The Life Story of David Lloyd George will hit these shores sometime soon.

Highly recommended: Paul Turner’s beautiful 1992 anti-war drama Hedd Wyn (above), written by Alan Llwyd, and starring a flawless Huw Garmon in the title role. Nominated for a best-foreign language film Academy Award, Hedd Wyn is, in my invariably humble opinion, one of the best movies of the 1990s.

Note: I’d like to thank Broadcastellan‘s Harry Heuser for the heads up about Fflics.

Let me know what you think of those films. If you do post your reviews on your site, please send me the link.

And I’m glad to hear that “David Lloyd George” will be coming out on DVD.

Robeson had strong ties to Wales (there’s even a Paul Robeson Wales Trust), as I learned when I moved here. He appreciated the openness of the Welsh and their bonding with each other as well as others in choral singing (a Welsh/English book on the subject is Let Paul Robeson Sing!).

Thanks for mentioning the festival. I got tickets for five of the screenings, including Valley, The Rat, and The Life Story of David Lloyd George. Not sure how I will fare watching movies at 10 AM, though.

Neil Brand, who is a friend of ours, told us that he is scoring the DVD release of David Lloyd George; I’ll quiz him on the fate of the film stateside. Paul Shallcross will also play to Caligari at the Abertoir horror film festival running at the same time in the same little town.

James,
Thanks for the “Proud Valley” comment. I’ve rephrased the text a bit.

Fascinating. I wish I could see the Ivor Novello films. “The Proud Valley” is one of Robson’s finest British films, although the film really doesn’t deal with racism. Actually, aside from one comment from a minor character early in the film, Robson’s race is really not mentioned. That was the really fascinating aspect of the film is that Robson was just allowed to be a character in the story without race being the pivotal driving force of the drama. Even more interesting was how Robson became a sort of surrogate husband/father figure for the wife and children of his white best friend when he is killed in a mine accident. And again, the racial aspect of this situation wasn’t even brought up.

As for Roger Livessy, I can’t remember if I’ve seen him elsewhere, but I thought he was a real charmer in “I Know Where I’m Going”.