Dawn of the Planet of the Apes Trailer: GMO Apes vs. ‘Conservatives’ + Theo James Shows ‘It’ All

‘Dawn of the Planet of the Apes’ trailer: Pitting GMO apes against GMO-eating apes

For whereas GMO-eating apes used to wage war against one another because of their different tribal affiliations, favorite god(s), football teams, etc., they’ve now banded together to face off against another The Other: those hairier, more formidable, and more evolved GMO apes.

Check out the Dawn of the Planet of the Apes trailer below.

“I want you to know, it’s not just about power,” we hear Dreyfus (Gary Oldman) declare in the Dawn of the Planet of the Apes trailer. “It’s about giving us the hope to rebuild, to recreate the world we lost.”

Now, is that man insane? Why on earth would anyone want to recreate this world? So GMO-eating apes can once again watch their favorite reality TV shows, post pictures on Facebook, and get drunk at sports bars?

Really, how could anyone in their right mind not root for Caesar and his fellow GMO apes?

True, they might end up not being much better than the less hairy, less intelligent, less evolved GMO-eating apes, but they surely could be no worse.

‘Dawn of the Planet of the Apes’ cast

Directed by Matt Reeves (Cloverfield, Let Me In), Dawn of the Planet of the Apes features the following:

The Dawn of the Planet of the Apes trailer was released nearly seven months prior to the film’s domestic opening. The 20th Century Fox release comes out in the United States and Canada next July 11.

Shortly after that, Dawn of the Planet of the Apes will debut in about a dozen countries, including Russia, The Netherlands, Belgium, Greece, Singapore, and the U.K.

Directed by Rupert Wyatt, the first movie in this reboot of the old Planet of the Apes series, the box office hit Rise of the Planet of the Apes, starred James Franco, Freida Pinto, John Lithgow, and Andy Serkis.

‘Planet of the Apes’ movies

There would be four increasingly less popular sequels:

Tim Burton remade Planet of the Apes in 2001, with Mark Wahlberg, Tim Roth, and Helena Bonham Carter in the leads.

Similarities to ‘Battle for the Planet of the Apes’

Filmmakers John Huston (The Maltese Falcon, The Treasure of the Sierra Madre, The African Queen) and, in a minor role, John Landis (An American Werewolf in London). 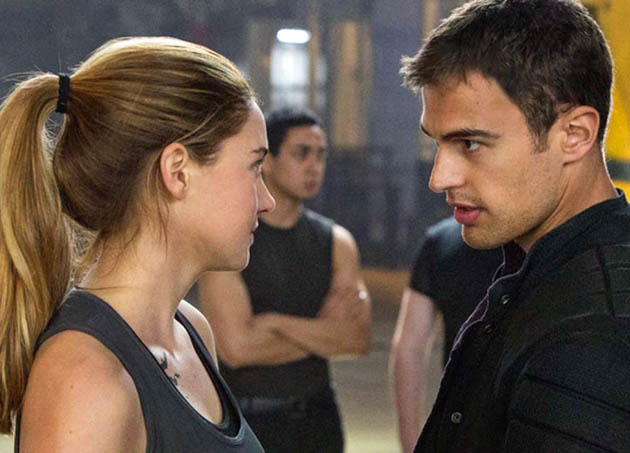 Divergent movie with Theo James and Shailene Woodley. The clip below indicates that Neil Burger’s film version of Veronica Roth’s novel Divergent is supposed to become the Twilight Saga of the mid-2010s – or so the Summit/Lionsgate combo hopes. Besides a pretty American actress (Shailene Woodley) playing the central character and a good-looking English actor (Theo James) as her romantic interest, it seems that Divergent, like New Moon and Eclipse before it, will have pop tunes giving it a soap opera feel.

“Do you want to see it?” Theo James’ Tobias Eaton (a.k.a. Four) asks Shailene Woodley’s Beatrice Prior (a.k.a. Tris) before removing one of his garments in this new Divergent movie clip. “That’s amazing!” she tells him.

No, for better or for worse, it’s not what you’re thinking.

The “it” in question is an enormous tattoo that covers nearly all of Theo James’ back. Which goes to show that Shailene Woodley’s character is rather easily amazed.

All the while, Ellie Goulding’s “Dead in the Water” plays in the background – or rather, the song is heard in the foreground, as it’s about as loud as the dialogue exchange between James and Woodley.

See and hear the Divergent movie clip/music video below.

Divergent movie clip with Theo James, Shailene Woodley, and Ellie Goulding’s “Dead in the Water.” Like Dawn of the Planet of the Apes, Divergent is set in a futuristic, none too cozy American city, Chicago, where the young Beatrice Prior, a.k.a. Tris, eventually comes out as a “divergent” woman – i.e., she doesn’t fit into any of the pre-set social castes representing specific human traits. Later on, Tris uncovers a nefarious plot to upend her society’s deceptively functional system. Theo James plays a Dauntless caste trainer, Tobias Eaton, a.k.a. “Four,” who becomes attached to Tris.

Chances are you wouldn’t be able to tell just by watching the soap opera clip above, but Divergent is being sold as a “thrilling action-adventure film set in a future where people are divided into distinct factions based on their personalities.”

Summit Entertainment and Lionsgate Pictures will be releasing Divergent, based on Veronica Roth’s bestselling book series, next March 21.

The film’s target audience is clearly the same people who turned the Twilight movie franchise, based on Stephenie Meyer’s bestselling book series, into a cultural phenomenon a mere five years ago. Of course, with the addition of those who were 8 or 9 years old back when Catherine Hardwicke’s first Twi-entry came out.

So, besides all the futuristic action-adventure thrills, Divergent will offer romance and passionate kisses; a good-looking young hero played by a British actor (Theo James instead of Robert Pattinson); a pretty, brown-haired, young heroine played by an American actress (Shailene Woodley instead of Kristen Stewart); and overly conspicuous pop songs.

Directed by Neil Burger – of the Bradley Cooper thriller Limitless and the well-received Edward Norton mystery-drama The Illusionist – the Divergent movie was adapted by Evan Daugherty and Vanessa Taylor. 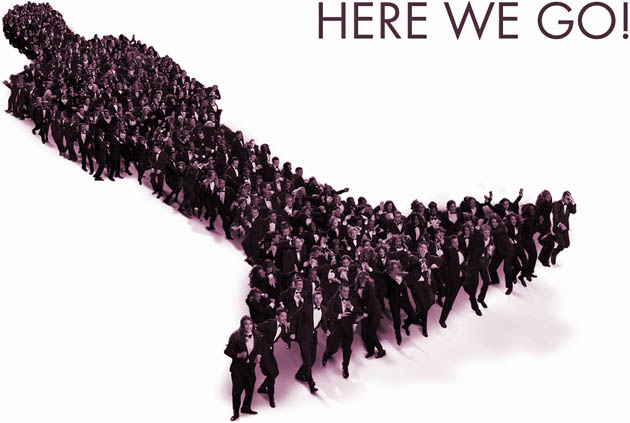 Oscar trailer “Here We Go!” In order to remind everyone that Oscar 2014 is just around the corner, talk show hostess and sometime actress Ellen DeGeneres (the sitcom Ellen, the feature The Love Letter) walks and 250 tuxedo-clad dancers dance to the sound of Fitz and the Tantrum’s “The Walker.” A lively promo for the generally DOA Oscar show.

Moving on from the Dawn of the Planet of the Apes trailer and Divergent clip to the 2014 Oscar trailer “Here We Go!” featuring talk show hostess Ellen DeGeneres and 250 tuxedo-clad, nimble-limbed dancers moving their bodies to the sound of Fitz and the Tantrum’s “The Walker.”

The trailer was directed by Paul Feig, among whose credits are the hit comedies Bridesmaids, starring Kristen Wiig and Melissa McCarthy, and The Heat, with McCarthy and Sandra Bullock.

Below are Ellen DeGeneres as The Walker (conveniently wearing sneakers) and 250 enthusiastic dancers in the 2014 Oscar trailer “Here We Go!” in addition to interviews with DeGeneres and Paul Feig, and a behind-the-scenes clip.

Oscar trailer: Behind the scenes.

The 2014 Oscar nominations will be announced on Jan. 16. Among the likely contenders in the film, acting, directing, and/or screenwriting categories are the following:

Image of Andy Serkis’ Caesar in the Dawn of the Planet of the Apes trailer: 20th Century Fox.

“Dawn of the Planet of the Apes Trailer: GMO Apes vs. ‘Conservatives’ + Theo James Shows ‘It’ All in Divergent Clip” last updated in July 2018.

Looks good im rooting for Ceaser and his Apes humans have screwed up the planet give it to the Apes.