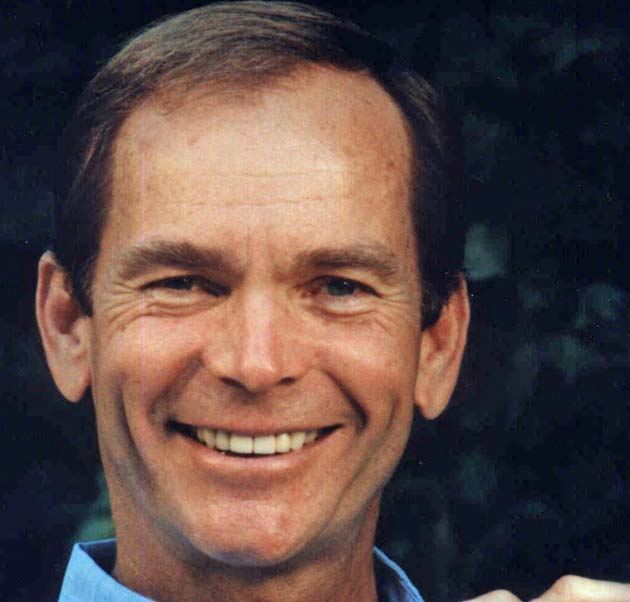 Dean Jones: Actor who went from ‘The Love Bug’ and ‘That Darn Cat!’ to Christian movies dead at 84

Dean Jones, best known for playing befuddled heroes in 1960s Walt Disney movies such as That Darn Cat! and The Love Bug, died of complications from Parkinson’s disease on Sept. 1 in Los Angeles. Jones (born on Jan. 25, 1931, in Decatur, Alabama) was 84.

Dean Jones began his Hollywood career in the mid-1950s, when he was featured in bit parts – at times uncredited – in a handful of films at Metro-Goldwyn-Mayer. In a 2009 interview for Christianity Today, Jones recalled playing his first scene (in These Wilder Years) with veteran James Cagney, who told him, “Walk to your mark and remember your lines” – supposedly a lesson the tyro performer would take to heart.

At MGM, bit player Jones would also be featured in Robert Wise’s Somebody Up There Likes Me (1956), starring Paul Newman and Pier Angeli; David Miller’s The Women remake, The Opposite Sex (1956), starring June Allyson and Joan Collins; and Richard Thorpe’s Elvis Presley star vehicle Jailhouse Rock (1957).

At the end of the decade, Jones found himself stuck in bit parts that required him to merely walk to his mark and remember his lines (if any). At that time, a move to New York helped to jump-start his stalled acting career.

With Jane Fonda on Broadway

Under the direction of Joshua Logan (Picnic, Sayonara), he made his Broadway debut in Daniel Taradash’s short-lived 1960 play There Was a Little Girl, with Jane Fonda. Later that year, under Joseph Anthony’s direction, he would star opposite Gig Young, Sandra Church, and Nan Martin in Lawrence Roman’s comedy Under the Yum-Yum Tree. The show ran from Nov. 1960 to April 1961.

Taking a long break away from Broadway (more on Jones’ stage work further below), at around that time he landed the title role in the sitcom Ensign O’Toole (1962-63), co-starring veteran Jack Albertson. 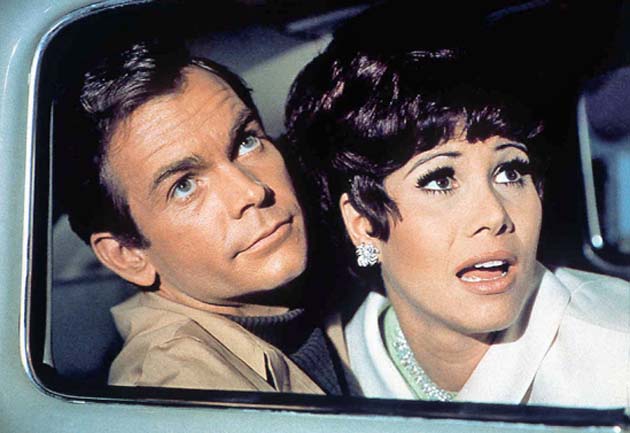 Two years later, Dean Jones become embroiled with a mad murderer in William Conrad’s creepy Two on a Guillotine, with Connie Stevens and Cesar Romero, and began his association with Walt Disney by way of Robert Stevenson’s That Darn Cat! (1965), opposite teen star Hayley Mills and Dorothy Provine.

For better or for worse, in his mostly quite popular Disney “family” films Jones would be typecast as somewhat bland, somewhat befuddled “all-American” types – characters that generally were more kinetic and less artificial versions of the James Stewart roles of the late 1930s and early 1940s.

Of these, the best remembered is probably The Love Bug, about a Volkswagen beetle with more brainpower than most humans. The box office hit ($51.26 million)* led to several sequels – Jones was seen only in Herbie Goes to Monte Carlo – and one made-for-television reboot in 1997. Directed by Ant-Man‘s Peyton Reed, the TV movie featured Bruce Campbell, John Hannah, and Alexandra Wentworth, with Jones cast in a small role as an older version of his 1968 character.

Additionally, Lindsay Lohan starred in the 2005 big-screen reboot Herbie: Fully Loaded, which turned out to be a respectable international hit.

Dean Jones was inducted into the Disney Legends Hall of Fame in 1995.

* It’s unclear how many times The Love Bug was rereleased. Box Office Mojo estimates that the Disney blockbuster grossed approx. $304 million in 2015 dollars.

From 1965 to 1977, Dean Jones worked almost exclusive for the Walt Disney Studios. His one major film foray away from Disney was Robert Ellis Miller’s silly 1966 film version of the Broadway hit comedy Any Wednesday, co-starring Jason Robards and Jane Fonda.

During that period, Jones also starred in Antonio Margheriti’s largely forgotten Italian-made comedy-fantasy Mr. Superinvisible / L’inafferrabile invincibile Mr. Invisibile (1970) and, if the IMDb is correct, was seen in a cameo – as a police officer – in Steven Spielberg’s The Sugarland Express (1974), starring Goldie Hawn, Michael Sacks, and William Atherton.

Following the end of his association with the Walt Disney Studios, Dean Jones’ movie career came to an abrupt halt after the release of Born Again, a 1978 religious drama starring The Love Bug and The Ugly Dachshund actor as Charles Colson, Special Counsel to disgraced U.S. President Richard Nixon from 1969 to 1973. While spending seven months in prison as a result of the Watergate conspiracy scandal, Colson converted to Evangelical Christianity.

Based on Colson’s autobiography, Born Again – targeting Fundamentalist Christian moviegoers decades before Son of God and War Room – was directed by Irving Rapper (of the Bette Davis’ star vehicles Now Voyager and The Corn Is Green), and featured Anne Francis as Colson’s wife, plus veterans Dana Andrews and George Brent in supporting roles.

In real life, Jones, who had developed a serious alcohol problem, himself became a radicalized Evangelical Christian in the 1970s, reportedly following a drunk-driving accident that almost took his life.

He would later assert that he would agree to appear only in films that wouldn’t “blaspheme God,” and more recently wrote a column for a Christian website, wondering whether Walt Disney had found Christ before his death, “Why Hollywood Makes Dirty Movies,” and about the problems resulting from the separation between Church and State, asking, “Would the polarized anger and strife we are experiencing today be possible if our Congress were publishing Bibles, our Supreme Court taking Communion, our Senators calling for public thankfulness to God?”

He also suggested that college students should become “faithfully intoxicated with the Holy Spirit” instead of resorting to booze.

In the late 1990s, after appearing in a Washington, D.C., production of Show Boat, he founded the Christian Rescue Committee, whose aim was to provide assistance to “persecuted Christians.”

Apart from a filmed, Dan Curtis-directed performance of his one-man show St. John in Exile (1986), in which he played Jesus’ last surviving apostle as he reminisces about his life, Jones would stay away from the big screen until the early ’90s. 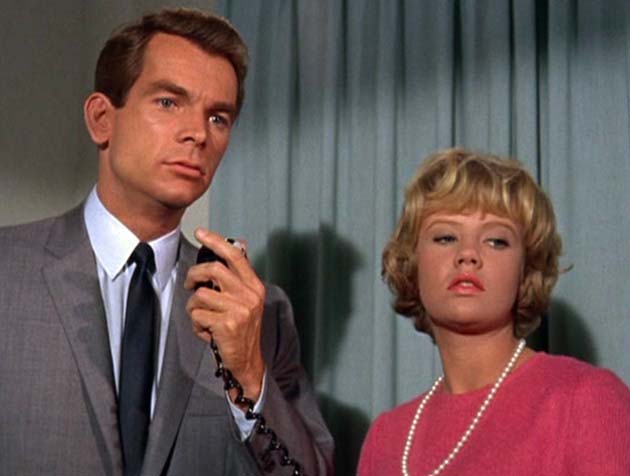 ‘Beethoven’ and ‘That Darn Cat’ remake

A handful of other features would follow in the ensuing years, including Brian Levant’s Beethoven (1992), a Disney-esque comedy starring a huge, slobbering St. Bernard, Charles Grodin, and Bonnie Hunt; and Philip Noyce’s un-Disney-esque Clear and Present Danger (1994), with Harrison Ford, Anne Archer, and Willem Dafoe.

More recently, as found on the IMDb Dean Jones was “rumored” as a cast member of a project titled Beyond the River Bridge, which was first announced back in 2009.

Back on Broadway: ‘Company’ stage debacle and recording posterity

Following Under the Yum-Yum Tree, nearly a decade would pass before Dean Jones returned to Broadway. He landed the key role of Robert (or Bobby) in the Harold Prince-produced, Stephen Sondheim musical Company – but quit the show not long after opening night because of private turmoil, as he was in the process of getting divorced. He was replaced by Larry Kert (Tony in the original Broadway production of West Side Story), who would go on to receive a Tony nomination for Best Actor in a Musical.

Company, which also featured Barbara Barrie, Elaine Stritch, and George Coe, ran April 1970-Jan. 1972. Curiously, although (mostly) not seen on the Broadway stage, Jones’ voice is the one heard on the recording of the show.

Jones would be back on Broadway in the Christian musical Into the Light, which bombed – six performances – at the Neil Simon Theatre in Oct. 1986, and in a special two-performance revival of Company in April 1993, with Patti LuPone as the host. (Larry Kert had died in June 1991.)

Dean Jones’ autobiography, Under Running Laughter, in which he discusses his conversion to Evangelical Christianity, came out in 1982.

In his 2009 Christianity Today interview, Jones had complained that “film and television have been partially responsible for the disconnect between our nation and our God.” Not surprisingly, his last film had a Christian theme: Joy Chapman and Owen Smith’s little-seen, straight-to-DVD adventure drama Mandie and the Secret Tunnel (2009), with Lexi Johnson.

Dean Jones’ Evangelical Christian views and quote re: separation of Church and State via Claudia Springer’s James Dean Transfigured: The Many Faces of Rebel Iconography.

Top 100 Horror Movies of All Time: From Psycho to Edith Scob