Adapted by Jamie Linden (We Are Marshall) from Nicholas Sparks’ novel about the long-distance love affair between a young couple kept apart by terrorists, wars, and tears, Dear John scored $10,913 per theater at 2,969 locations.

‘Titanic’ vs. ‘Avatar’: Most weekends at top of domestic box office chart

Avatar is down 25 percent compared to the previous weekend, which may be partly explained by the Super Bowl having been held on Sunday. James Cameron’s environmentally conscious sci-fi adventure has generally lost between 10 and 20 percent of its business each week.

Twelve years ago, Cameron’s eventual Best Picture Oscar winner Titanic, toplining Leonardo DiCaprio and Kate Winslet as a young couple kept apart by class, iceberg, and frigid waters, remained at the top of the domestic chart for a total of 15 weekends.

‘Avatar’ back on top?

How well Dear John will keep up remains to be seen. In other words: inveterate Avatarites shouldn’t despair, as the 3D sci-fier may recoup its top position in the near future.

Or it may not. Next weekend offers Benicio Del Toro and Anthony Hopkins in Joe Johnston’s The Wolfman; Garry Marshall’s Valentine’s Day, featuring an all-star cast that includes Julia Roberts, Taylor Lautner, and Bradley Cooper; and Chris Columbus’ fantasy adventure Percy Jackson & the Olympians: The Lightning Thief, with Logan Lerman.

Thursday, Feb. 12, update: Although dethroned over the weekend, Avatar has maintained the domestic box office lead since Monday, Feb. 8. Also of note, on Tuesday, Feb. 9, Avatar earned $1.85 million, marking the first time since its release 55 days earlier that it earned less than $2 million on a day.

According to estimates provided by Box Office Mojo, new entry From Paris with Love was no Dear John, bringing in a mere $8.1 million in third place over the weekend.

Directed by Martin Campbell and starring Mel Gibson, Edge of Darkness pulled in $7 million at no. 4 – a steep 59 percent drop from the previous weekend. The $80 million revenge thriller also featuring Ray Winstone and Danny Huston has earned a very disappointing $29 million after ten days.

The Kristen Bell-Josh Duhamel romantic comedy When in Rome was no. 6 this past weekend, with $5.5 million; that’s a hefty 55 percent drop from a week ago. Total to date: A quite modest $20.8 million.

At no. 7, The Book of Eli raked in $4.8 million (down 46 percent). The post-apocalyptic drama featuring Denzel Washington has reached $82.1 million to date.

Breaking into the Top Ten, Scott Cooper’s Crazy Heart, which Fox Searchlight expanded to 819 theaters following Jeff Bridges’ Best Actor Academy Award nomination, was the no. 8 movie on the domestic box office chart. Crazy Heart took in $3.6 million for a good $4,457 per theater and a total of $11.1 million. Maggie Gyllenhaal costars.

Rounding out the Top Twelve were:

Gone from the Top Twelve:

The 2010 Oscar nominations announcement coupled with an increase in number of screens have helped – smaller – movies as diverse as:

Curiously, Up in the Air is playing at 117 more screens than last weekend. Even so, the comedy-drama featuring three Oscar nominees in the acting categories (George Clooney, Vera Farmiga, Anna Kendrick) was down 17 percent – a relatively small drop, but a drop all the same.

As for “the rest,” the Oscars seem to have made little – if any – difference to the weekend box office performance of multiple nominee Avatar (up for Best Picture/Best Director), The Young Victoria (with Emily Blunt in the title role), The Princess and the Frog, Sherlock Holmes, The Lovely Bones, and Nine.

Of these, only the last two titles had nominees in the acting categories, both in supporting roles: Stanley Tucci and Penélope Cruz, respectively.

‘Dear John’ with Channing Tatum and Amanda Seyfried: Love in times of terrorism.

Feb. 5, ’10: After seven weekends, Avatar‘s reign at the domestic box office may finally be over: an estimated $6.2 million on Friday vs. $13.8 million for Lasse Hallström’s tearjerker Dear John on Day One.

Avatar had a small but not insignificant 17 percent drop from the previous Friday; even if the film rallies on Saturday – as it surely will – James Cameron’s 3D sci-fi adventure should finish the weekend with at most $23-27 million. Outstanding for a movie on its eighth weekend – but it’ll land Avatar in the second slot all the same.

Twelve years ago, Titanic remained on top for a total of 15 weekends.

On Day One, the John Travolta-Jonathan Rhys Meyers thriller From Paris with Love earned a lowly $3 million. Following in fourth place was Mel Gibson’s revenge thriller Edge of Darkness, with $2.31 million, a steep 59 percent drop from the previous Friday. Total to date: $24.4 million.

At no. 5, the Kristen Bell-Josh Duhamel romantic comedy When in Rome earned 2 million, a 54 percent drop from last week. Total to date: a paltry $17.39 million.

On Friday, the only “biggie” (on the box office chart) that has clearly benefited from the Oscar nominations hype was Crazy Heart, which earned nods for Jeff Bridges, supporting actress Maggie Gyllenhaal, and T Bone Burnett and Ryan Bingham’s song “The Weary Kind.”

The other Oscar nominees among the chart’s top 15 movies – Avatar, The Blind Side, Up in the Air, The Lovely Bones, Sherlock Holmes – all earned less than last Friday. 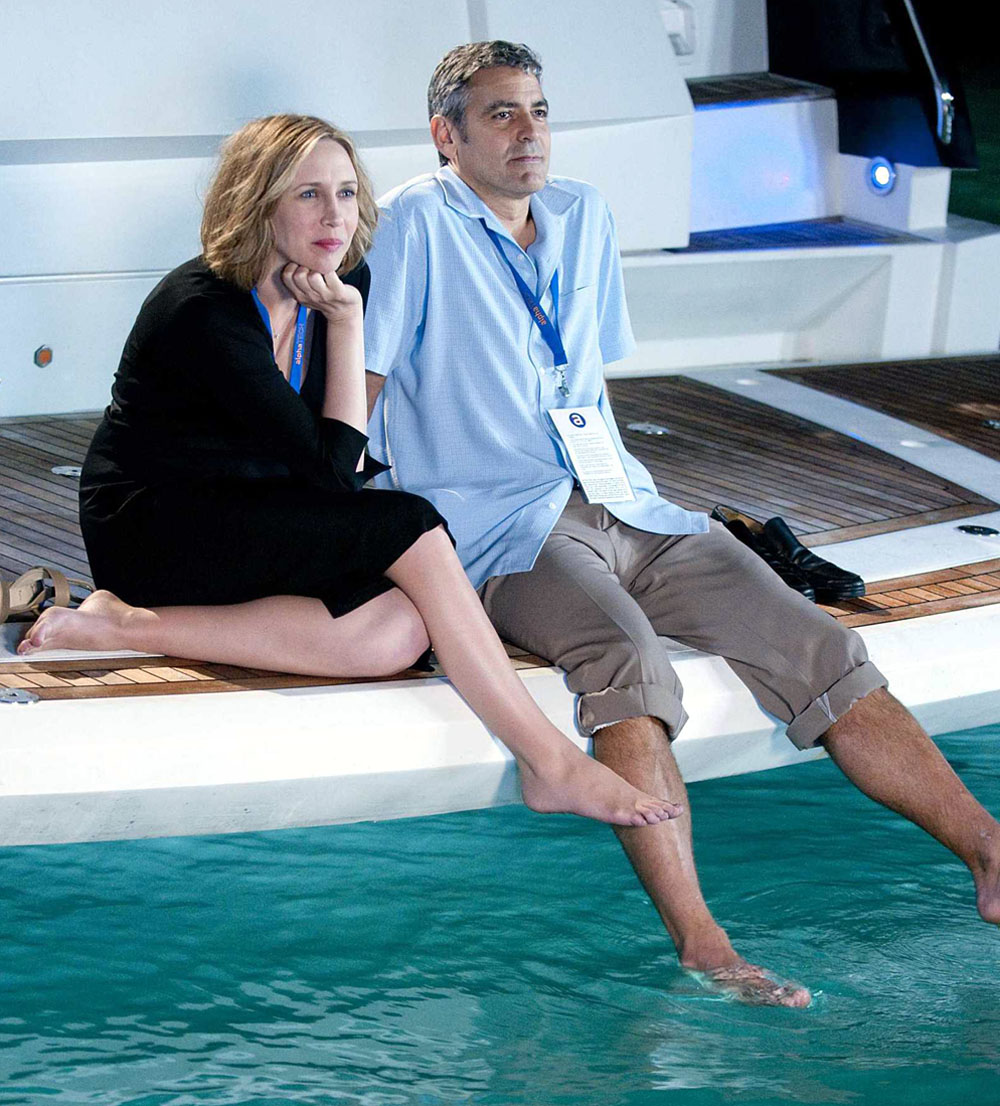 On Tuesday, James Cameron’s Avatar once again topped the North American box office chart, with $2.688 million, a minuscule 0.4 percent drop from the day before, according to figures provided by Boxofficemojo.com. The Academy Award nominations announced early that day apparently didn’t have much of an effect on the film’s grosses, unless the attendance drop was going to be much steeper. However, that hasn’t been the case in the last several weeks.

At a distant second, Mel Gibson’s revenge thriller Edge of Darkness gained 5 percent, with $1.384 million and a $452 per screen average. The film’s total to date is $19.9 million. The Josh Duhamel-Kristen Bell romantic comedy When in Rome, came in third place with $872K, an 11.2 percent increase, and $355 per screen. Total: $14 million.

Did the Oscar nominations help out? Sure they did – a little. Movies already on their way out of the top ten had the most gain. Although It’s Complicated was totally shut out, Meryl Streep is in the running for Julie & Julia, which is no longer playing. The Oscar publicity surrounding Streep’s name most likely was responsible for Nancy Meyers’ comedy selling more tickets. Up in the Air and The Blind Side were both nominated for best picture, while George Clooney, Sandra Bullock, and Jeff Bridges are all in the running as well.

It should be noted that several movies at the bottom of the box office chart (The Men Who Stare at Goats, Law Abiding Citizen, That Evening Sun, The Road) posted increases on Tuesday, even though they had nothing whatsoever to do with the Oscars.

Overall, the domestic box office increased by a mere 2.4 percent from the day before – and showed an 11.8 percent drop from the previous Tuesday.

Colin Firth in A Single Man

Avatar had one of the smallest drops, 1.5 percent, down to $2.647 million for a total of $603.7 million after 48 days. James Cameron’s sci-fier was followed by Mel Gibson’s revenge thriller Edge of Darkness, which lost 19.9 percent from the previous day, with grosses of $1.1 million. At #3, the Josh Duhamel-Kristen Bell romantic comedy When in Rome, earned 706K, a 19 percent drop.

On Monday (Feb 2), Avatar earned $2.7 million at the North American box office, falling below the $900 per screen mark ($879 to be exact), according to Box Office Mojo. That represents a relatively small 14.3 percent drop from the previous Monday. After 46 days out, Avatar‘s domestic total is $598.4 million.

Once Tuesday figures are tallied, Avatar will have passed James Cameron’s own Titanic at the domestic box office (not accounting for inflation or higher 3D/IMAX ticket prices). The Leonardo DiCaprio-Kate Winslet romantic melodrama grossed $600.4 million in the U.S. and Canada in 1998.

This past weekend, Avatar broke the $2 billion mark in worldwide earnings. The low value of the American dollar and higher ticket prices have helped its overseas revenues significantly.

James Cameron’s Avatar led the pack at the domestic box office on Monday, with $2.7 million, as per Box Office Mojo.

Mel Gibson’s comeback vehicle Edge of Darkness came at a distant second, with $1.31 million and a $430 per screen average. The revenge thriller opened with $17.1 million, several million dollars below what some had been predicting. Directed by Martin Campbell, Edge of Darkness is Gibson’s first film since M. Night Shyamalan’s 2002 horror/sci-fi Signs.

The Josh Duhamel-Kristen Bell romantic comedy When in Rome, came in third place with $779K and $317 per screen. Denzel Washington’s The Book of Eli was #4 with $744,000, followed by the supernatural adventure Legion with $625K.

‘The Hunger Games’ Movie: One of Biggest Debuts Ever? + Trailing ‘The...

Well even without any Oscar’s nominations, The men who stare at goats has two of its main character nominated for best actor.