Dan Erdman 12 years ago
Death in the Garden with Simone Signoret and Georges Marchal.

I hadn’t even heard of Death in the Garden before its recent DVD release on the Microcinema label. It ranks as among the least-known of Luis Buñuel’s films, probably because it’s the least obviously Buñuelian.

Aside from some fairly incidental bits of surrealist imagery – a freshly killed snake devoured by ants; Simone Signoret dressed in an evening gown and diamonds in the steaming jungle – and religious criticism in the form of a muddle-headed priest character, this is the sort of well-made, atmospheric adventure film that could have come from any number of directors from that era.

Buñuel’s reputation as a rascal and prankster often overshadows his mastery of classical filmmaking, and this somewhat more conventional – but never less than exciting – movie should serve to deepen our understanding of this most essential of directors.

Co-written by Buñuel, Luis Alcoriza, and Raymond Queneau from a novel by José-André Lacour, the plot is as follows:

A rural outpost in an unidentified Latin American country erupts into rioting and strife when the crooked local government moves to confiscate diamond mines from their downtrodden prospectors. The escalating conflict drags most of the town into the maelstrom, including cynical drifter Shark (Georges Marchal), world-weary prostitute Djin (Signoret), aging miner Castin (Charles Vanel) and his deaf-mute daughter (Michèle Girardon), and the aforementioned priest, Father Lizardi (Michel Piccoli).

When the situation degenerates into open street battles, the government mistakenly accuses Shark and Castin of acting as the ringleaders of the militia. They flee into the jungle, with Djin and the priest tagging along.

All of the political intrigue, civic unrest and the very plot itself are forgotten at this point, as the movie suddenly shifts gears to focus on their party’s desperate struggle to survive in the wilderness. 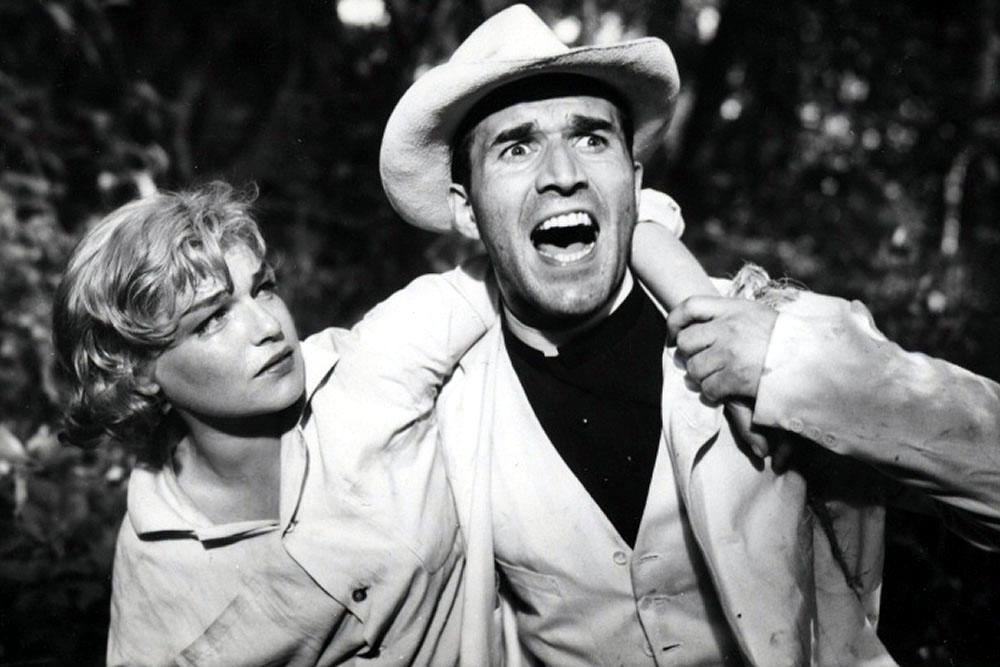 The sudden change of locale and focus of the story feels jarring in a way that’s more perplexing than challenging; the climax is rather abrupt as well, seemingly coming out of nowhere. The change in the story’s tone is particularly weird given how tightly plotted and motivated the action of the first half of the movie is. I suppose such a sudden switch fits in with the film’s theme of the brutal randomness of life away from civilization, though that may be a charitable reading.

But this is a very minor criticism. While it’s not as grand or rich as his better-known work, Death in the Garden is still a fine addition to the Buñuel canon.

Microcinema’s DVD release boasts a fine, sharp image that admirably captures minor pictorial details. The color seems to be a bit faded, but that appears to have been a limitation of the source print.

The two audio tracks – one in French, one in Spanish – fare less well; the former sounds somewhat flat and muffled, the latter seems as though every part was dubbed by the same voice actor. A third track features commentary by Ernesto R. Acevedo-Munoz. Interviews with Piccoli and Buñuel scholar Victor Fuentes round out this worthy release.