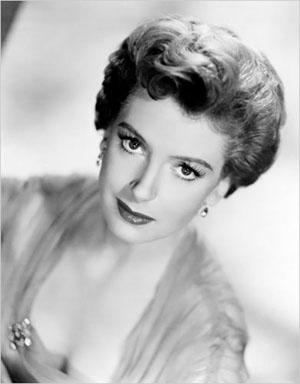 Deborah Kerr day Turner Classic Movies’ “Summer Under the Stars” series will feature two TCM premieres: The Day Will Dawn / The Avengers, a British-made 1942 spy drama, and Leo McCarey’s An Affair to Remember (1957), one of Kerr’s best-known films.

I haven’t seen The Day Will Dawn, but An Affair to Remember is an effective romantic comedy-drama, with both Kerr and Cary Grant in top form as the couple who fail to meet as near to heaven as possible, but who go on loving one another, anyways.

As I’ve said before in this blog, Deborah Kerr is one of my favorite dozen or so actors. Her performances, however cool and composed on the surface, always carry within them the seeds of unbridled, un-moral, undignified passions – which are probably illegal in most countries. And few performers have been able to say as much with a mere quiver of the lips or a lowering of the eyelids.

Perhaps because she’d played the role about a million times on Broadway or perhaps because Robert Anderson’s daring play was somewhat toned down (by Anderson himself) for the screen, Kerr’s acting feels disappointingly mechanical in Vincente Minnelli’s 1956 version of Tea and Sympathy. That’s too bad, as her concerned housemaster’s wife who saves a nice young man (John Kerr, no relation, above) from a couple of fates worse than death – homosexuality and virginity – could have been one of the actress’ greatest screen roles. Unfortunately, everything else about Minnelli’s good-looking film feels mechanical as well.

On the other hand, Kerr steals the show in (what amounts to) two supporting parts: as the adulterous captain’s wife in Fred Zinnemann’s From Here to Eternity (1953, above, with Burt Lancaster) and as Spencer Tracy’s neglected-turned-alcoholic wife in George Cukor’s Edward My Son (1949). Both films are excellent whenever Kerr is on screen, but when she’s not they abruptly turn into conventional melos. (Though Donna Reed holds her own in From Here to Eternity as well.)

I haven’t seen The End of the Affair, and although I’m not expecting it to be nearly as good as Neil Jordan’s 1999 version, I’m still curious to find out how Kerr handles another adulterous character, this time cheating on husband Peter Cushing with lover Van Johnson (above). The same goes for I See a Dark Stranger, in which she plays an Irish lass who hates England so much she becomes a Nazi spy.

I’d have liked Julius Caesar better had Kerr been cast as Mark Antony instead of Marlon Brando. And I’d have liked Rear Window and Vertigo much better had Kerr landed the James Stewart roles. Perhaps one of these days I’ll be able to watch those versions in a more enlightened parallel universe.

And when will TCM unearth Love on the Dole and The Naked Edge? I’d also take The Gypsy Moths and The Assam Garden.

I wish TCM would rerun all of Deborah Kerr’s shows again. I’ve watched “From Here to Eternity”, “The Life & Time of Colonel Blimp”, “An Affair to Remember”, & “Black Narcissus” on DVD recently and have enjoyed them immensely. I’d very much like to have watched all the movies listed above. In addition I wish they would also, include “Love on the Dole”, “Dream Wife”, “Vacation From Marriage”, “Separate Tables”, “Proud & Profane”, “When Winter Comes”. I can’t seem to find it on DVD. Also has anyone seen “Three Roads to Rome”? It was an old BBC classic that never got shown in America.

You’re in for a treat if you haven’t seen “I See a Dark Stranger” it’s a wonderful dark comedy with a wonderful performance by Kerr.

I disagree about “Tea and Sympathy.”
I think that Deborah Kerr and John Kerr do an excellent job. I also think that Vincente Minnelli’s direction is simply flawless.
I haven’t watched the play, so I don’t know if it’s very different from the film, but Robert Anderson’s adaptation of his own work is very powerful and moving.