John Gilbert late silent adventure Desert Nights asks a question for the ages: Is there honor among thieves?

The Metro-Goldwyn-Mayer release Desert Nights arrived in theaters at the tail end of the silent era. By 1929, audiences wanted lots of singing and dancing – talkies! And they might have been impatient to hear John Gilbert’s speaking voice. I can’t tell whether sound would have improved it or not, but Desert Nights has a lot of title cards filled with dialogue.

Directed by the prolific William Nigh,[1] the film tells the story of diamond thieves who get stranded in the Sahara and almost die of thirst. (At first, Desert Nights was appropriately titled Thirst.)

Cinematographer James Wong Howe perfectly captures the hot, dry, burning sands of the African desert (which in reality was likely the Mojave in Hollywood’s backyard). We see the parched lips of each character trying to quench their thirst with a few canteen rations of fresh water while being tormented by the reservoirs of salt water they find.

Drinking from the stagnant ponds would only increase their thirst or kill them. They even have to tie their oxen to a bush to prevent them from drinking it.

But more than a story of survival, Desert Nights questions whether there is honor among thieves. In fact, the three main characters turn out to be nothing like what they appeared to be at the beginning of the film.

John Gilbert plays a tough-guy diamond worker in Africa. He comes under the influence of a couple of smugglers (Ernest Torrence and Mary Nolan), posing as father and daughter. Far from being a father, Torrence is a cold-blooded killer who would do anything in the illegal diamond trade. Nolan, for her part, is a floozie disguised as an ingenue. The guys even nickname her “Baby.”

All the characters are sordid; they are cheaters with little virtue – or so it seems. But that is why I took an interest in them; their unpredictability.

The adventure of three crooks lost in the desert without food or water impels forward the screenplay, written by various hands including Lenore J. Coffee and Willis Goldbeck. The best scenes are the ones that show the characters’ deceit and dishonesty.

I can’t quite attribute anything special to director William Nigh, unless to credit him with a sense of realism in the desert. The depiction of the unbearably hot sun and the vultures that fly overhead, waiting for the living to become the dead, are all effective.

Desert Nights has its share of Pre-Code moments, too. The dialogue is both tough and unapologetic, while we get to see John Gilbert carrying Nolan to a tent and closing the flap. In addition to a teasing shot of Nolan’s naked back while she bathes. 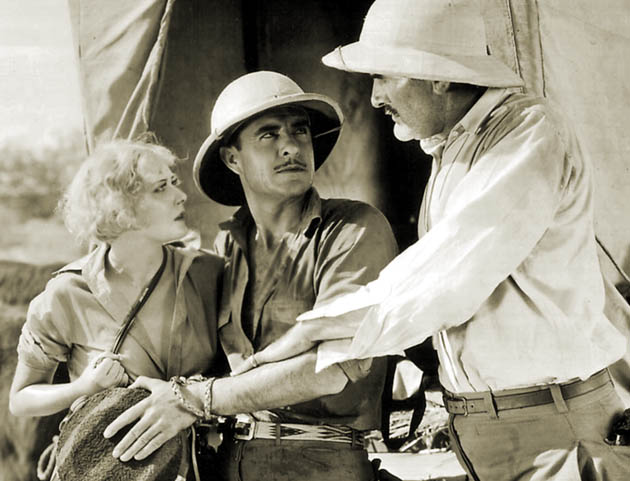 Film historians have said that MGM delayed John Gilbert’s talkie debut even though he had no problems appearing in The Hollywood Revue of 1929 – spouting Shakespeare! It has been reported that the studio was unsure of his voice.

Volumes have been written about all the myths, legends, and half-truths concerning studio head Louis B. Mayer’s attempts to ruin Gilbert’s career. But those details are left to speculators. All that aside, this was Gilbert’s last silent film. Shortly afterwards, his downward spiral would begin.

Besides John Gilbert and Mary Nolan, an unsurprisingly good performance is given by Ernest Torrence, one of my favorite villains. No one can portray a seething, unctuous, loathsome character quite like him, although reports of his real life – as opposed to his reel life – indicate he was a kind English gentleman. But like Boris Karloff after him, Torrence’s frightening face always belies that fact on screen.

Summing up, Desert Nights is an enjoyable adventure, even though the ending was a letdown. Sure I liked the “things are not as they seem” component, but the tone could have been more surprising; something more unpredictable such as what’s found in the film’s earlier scenes.

In fact, I felt betrayed, for the ending was reminiscent of the sort of “It was all a bad dream” fairy tale.

Even so, Desert Nights is a good little film that clocks in at just around an hour.

William Nigh: At his peak at MGM

Nigh was at his peak during his tenure at Metro-Goldwyn-Mayer in the second half of the 1920s. Besides Desert Nights, among his MGM credits were Mr. Wu (1927), with Lon Chaney, Louise Dresser, and Renée Adorée; Across to Singapore (1928), with Ramon Novarro, Joan Crawford, and Desert Nights villain Ernest Torrence; and Thunder (1929), with Lon Chaney, Phyllis Haver, and James Murray.

The vast majority of Nigh’s nearly 80 talkies were B fare, e.g., The Sea Ghost (1931), with former silent era star Laura La Plante; She Gets Her Man (1935), with ZaSu Pitts and Helen Twelvetrees; and The Strange Case of Doctor Rx (1942), with Patric Knowles, Lionel Atwill, and Anne Gwynne.

Lon Chaney Movies: The Man of a Thousand Faces

Henry King Movies: From Tol’able David to Tender Is the Night

Just saw Desert Nights on TCM for a second time. Will never pass up a John Gilbert film. Torrence and Nolan just added to the enjoyment of this film. Characterization was well done. Overall, a lot of fun. I’ve seen some Gilbert talkies and thought he was pretty good in those as well.

I just watched DESERT NIGHTS prior to reading your altfg.com review, Danny, which the website lists as having been posted nine months earlier (which would therefore date it to sometime during September 2017).

Since that time, has any information come to you regarding WHY the ending seems so disturbingly abrupt?

In any case, here’s my suggested explanation:

What survives (in both the TCM and Warner Home Video libraries) is an approximately six-reel version of what was premiered in 1929 as a seven-reel feature.

Contemporary reviews indicate that the screen drama originally climaxed with a violent, disorienting sandstorm, only after which the principal characters are “re-united,” the villain arrested and the former seductress “paroled” into the romantic custody of the hero.

At some point, perhaps decades later, preservation of the film was undertaken DESPITE the preservationists’ discovery that the sandstorm footage had been excised from the surviving nitrate source material (to use as first-generation stock footage elsewhere) and NEVER replaced!

Then, perhaps, members of the preservation team made the snap decision to RE-EDIT the film’s conclusion by deleting ALL sandstorm-related, narrative material and thus wrap up the story in the hasty/desultory/unsatisfactory/anti-climactic manner in which we now see it conclude.

And even if the sandstorm footage COULD be discovered in some subsequent production and duped for re-insertion into DESERT NIGHTS, the narrative shots of the characters (from the original feature) interacting with the storm would still be lost to history anyway.