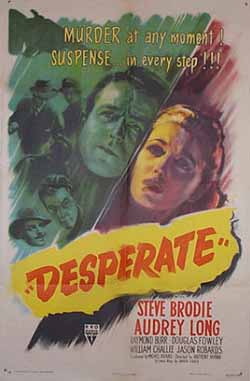 In Anthony Mann’s action-packed B film noir Desperate, the lights don’t have to go out for danger to strike. When a clean-cut delivery man (Steve Brodie) gets accidentally involved in a burglary, the dark forces will pursue our hero day and night, whether through city streets or in the wide open spaces of the Minnesota countryside. In this world of lurking danger and paranoia, no one – well, except dowdy aunts – are to be trusted.

What prevents Desperate from being a truly remarkable thriller is Harry Essex’s inane screenplay (from a story by Mann and Dorothy Atlas). Even film noirs need scripts that make at least a modicum of sense – those stories may be set in a shadowy netherworld, but that forbidding landscape still belongs to planet Earth. Essex’s Desperate screenplay is filled with clichés (Urban = Evil; Rural = Good) and myriad plot contrivances.

In fact, the Desperate characters act so stupidly that they seem to be begging for the worst to happen. Steve, for instance, drives away from the robbery scene with a gangster lying next to him – and with a loaded gun lying next to the gangster. Guess what happens… Later, it’s a dumb gangster who allows Steve to flee. Then it’s Steve’s turn to refuse to go to the police when the cops – one would think – would have provided his wife (Audrey Long) with better protection than her Aunt Klara (Ilka Grüning).

Adding insult to injury, the poor auntie has to face the gangsters herself, for after being found out Steve and his wife flee without even waiving the old lady good-bye. Such situations are so silly as to be either laughable or irritating – sometimes both. And those are not the sorts of reactions one would expect (or desire) while watching a tough gangster flick. (Also, it’s funny to hear a gangster say something like “You bloodsucker,” instead of “You cocksucker.” Even murderous thugs had to watch their language in those Production Code days.)

Yet, Desperate has much to recommend it. Displaying a combination of toughness and vulnerability, second-rank leading man Steve Brodie is highly effective as the man on the run. Also, director Anthony Mann, editor Marston Fay, and cinematographer George E. Diskant (less renowned than Mann’s frequent film noir collaborator John Alton, but equally effective) bring the right mood to the menacing proceedings. (In the film’s most admired sequence, Steve gets a well-deserved beating under a swinging ceiling lamp. A striking-looking scene, no doubt, but one that calls too much attention to the filmmakers’ style, becoming more than a little obvious after the first couple of punches.) But best of all, this is a thriller that manages to tell its silly story in 73 tight minutes.

Even though it’s his wedding anniversary, delivery man Steve Randall (Steve Brodie) accepts a late-night job because he needs the money. Once at the warehouse, he discovers that he has been tricked by mobster Walt Radak (Raymond Burr), who is planning to use Steve’s truck for a heist. When Steve realizes he’s been conned, he foils the burglary attempt – but a police officer gets killed during the ensuing shoot-out.

Making matters worse, Radak’s little brother is caught by the police and will most likely be sent to the electric chair. Radak demands that Steve take the rap, but despite a nasty beating he refuses to do as told. Shortly thereafter, much luck and a gangster’s incredible stupidity allow Steve to flee.

Steve’s wife, Anne (Audrey Long) pleads for him to go to the police, but he refuses, fearing they won’t believe his story. First of all, he wants to make sure she’s safe from Radak, who has vowed to hurt her in retaliation for Steve’s actions.

The couple end up in a farm in Minnesota, where they stay with Anne’s Aunt Klara (Ilka Grüning). However, not much later the gangsters find their whereabouts. Steve flees again, and eventually dispatches Anne to California.

The final confrontation between Steve and Radak will take place at the stroke of midnight – the exact moment when Radak’s brother is set to fry in the chair.