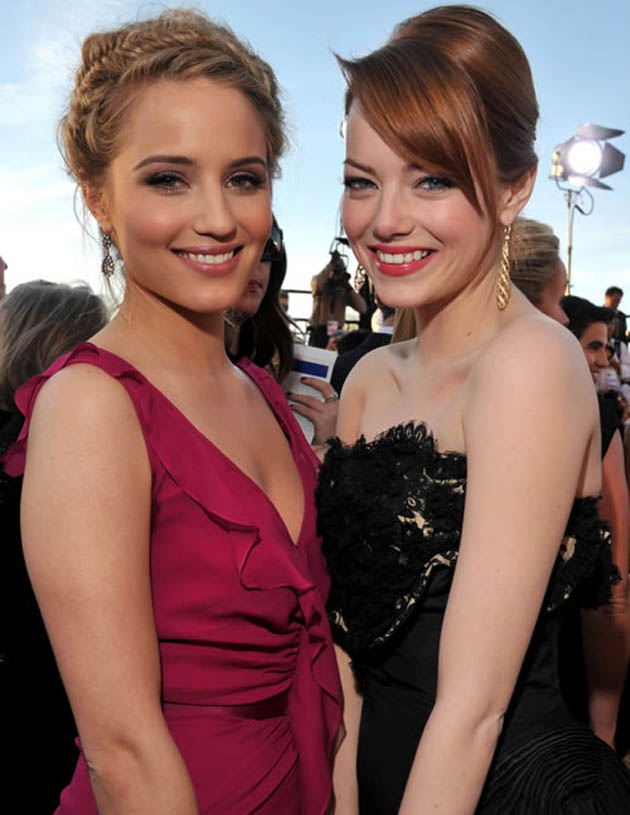 Glee actress Dianna Agron and The Help actress Emma Stone are pictured above on the Red Carpet of the 2012 Screen Actors Guild Awards. The ceremony was held at the Shrine Auditorium on Jan. 29 in Los Angeles.

Dianna Agron was a SAG Award nominee as a member of the television comedy/musical series Glee ensemble. The long list of Agron’s fellow Glee nominees consisted of:

Emma Stone was a SAG Award nominee for being a member of another ensemble – in her case, in the motion picture categories. Stone’s fellow players in Tate Taylor’s The Help were:

The Help was a somewhat surprising Best Cast SAG Award winner. Many had been expecting Michel Hazanavicius’ The Artist to take home the Actor statuette, especially after the film’s star, Jean Dujardin, won the Best Actor SAG Award instead of Hollywood fave George Clooney for Alexander Payne’s The Descendants.

Besides The Help and The Artist, the other movies nominated for Best Cast were The Descendants, Woody Allen’s Midnight in Paris, and Paul Feig’s Bridesmaids. 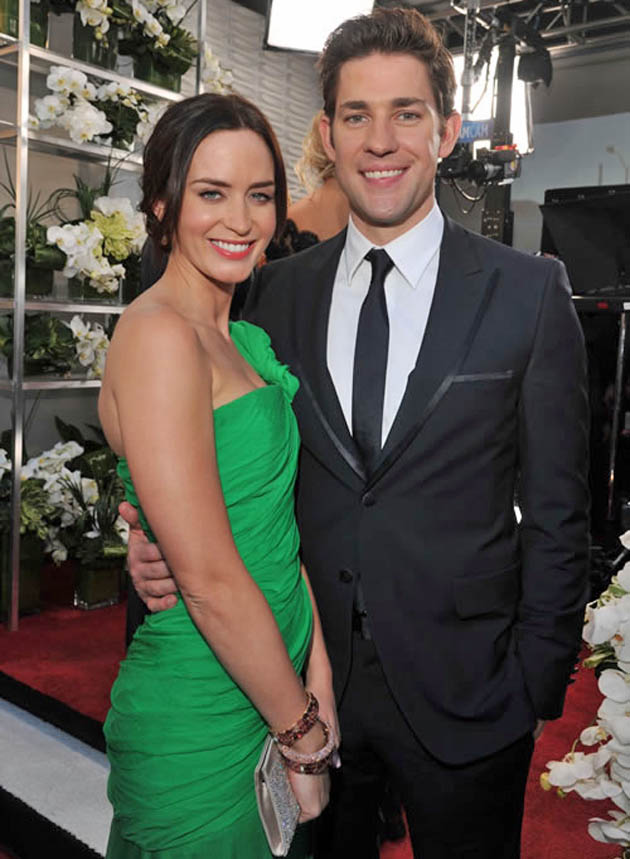 John Krasinski and Emily Blunt are pictured above on the 2012 Screen Actors Guild Awards’ Red Carpet. The SAG Awards ceremony was held on Jan. 29 at the historic Shrine Auditorium in Los Angeles.

This year, John Krasinski received his sixth SAG Award nomination for being part of the ensemble of the popular television comedy series The Office. Krasinski and his fellow cast members have won two SAG Awards (2007, 2008). This year’s nominees included:

Among John Krasinski’s film appearances are those in the George Clooney-directed Leatherheads, co-starring Clooney and Renée Zellweger, and Nancy Meyers’ It’s Complicated, with Meryl Streep, Steve Martin, and Alec Baldwin. 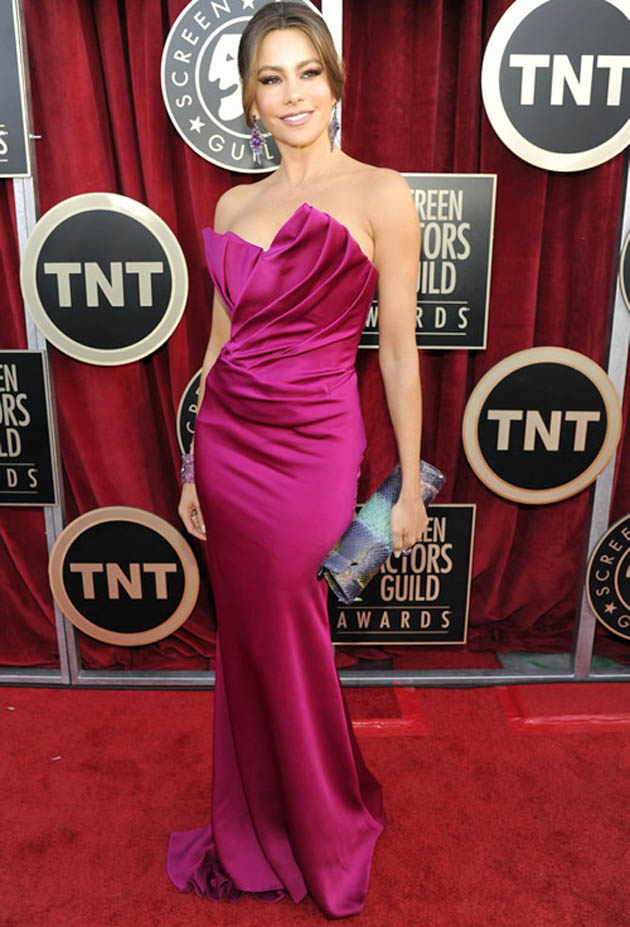 Sofia Vergara is pictured above on the 2012 Screen Actors Guild Awards’ Red Carpet just outside the Shrine Auditorium. For her performance as Modern Family’s Gloria Delgado-Pritchett, Vergara was nominated for a SAG Award for Best Actress in a Comedy Series. Her fellow nominees were Tina Fey for 30 Rock, Edie Falco for Nurse Jackie, Fellow Modern Family actress Julie Bowen, and eventual winner Betty White for Hot in Cleveland.

She’ll also be seen in the upcoming The Three Stooges, with Glee‘s Jane Lynch, Sean Hayes, Larry David, Craig Bierko, and others. 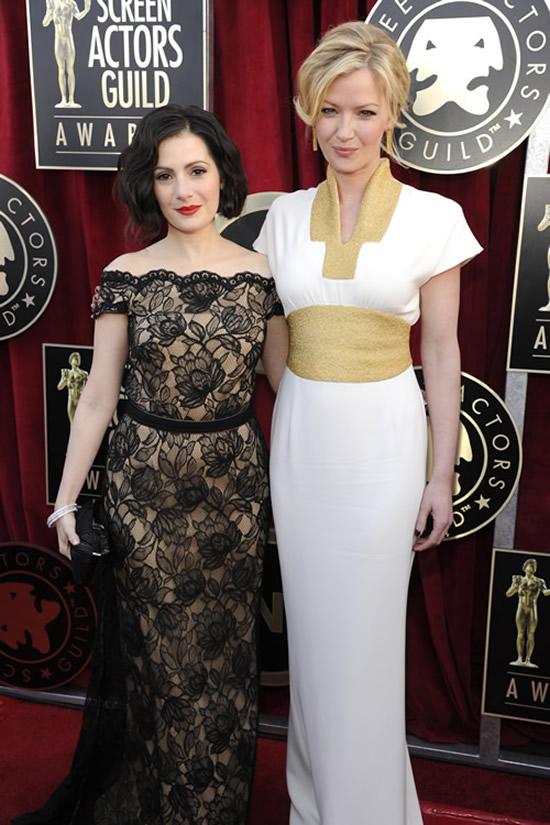 Aleksa Palladino (Find Me Guilty, Before the Devil Knows You’re Dead) and Gretchen Mol (3:10 to Yuma, Puccini for Beginners), both SAG Award winners as cast members of the television series Boardwalk Empire, on the red carpet at the 18th Screen Actors Guild Awards. The SAG Awards ceremony was broadcast on TNT/TBS from the Shrine Auditorium on January 29 in Los Angeles, California. (Photo by Kevin Mazur/WireImage.)

The Boardwalk Empire competitors were the ensembles of the following television drama series:

Looking – quite literally – statuesque in a tight-fitting red dress, Michelle Williams is pictured above on the Red Carpet of the 2012 Screen Actors Guild Awards, held at the Shrine Auditorium on Jan. 29, in Los Angeles.

Williams was nominated for as Best Actress in a Motion Picture for her performance as Marilyn Monroe in Simon Curtis’ My Week with Marilyn, co-starring BAFTA Orange Rising Star nominee Eddie Redmayne and Kenneth Branagh as Laurence Olivier.

My Week with Marilyn is set during the making of Olivier’s The Prince and the Showgirl (1957). The cast also includes Julia Ormond as Vivien Leigh (Olivier’s wife at the time), Judi Dench as actress Sybil Thorndike, Dominic Cooper, Pip Torrens, Dougray Scott, Geraldine Somerville, and Harry Potter and the Deathly Hallows: Part 2 actress Emma Watson.

My Week with Marilyn has also earned Michelle Williams a Best Actress Academy Award nomination. She had been previously shortlisted for two Oscars: 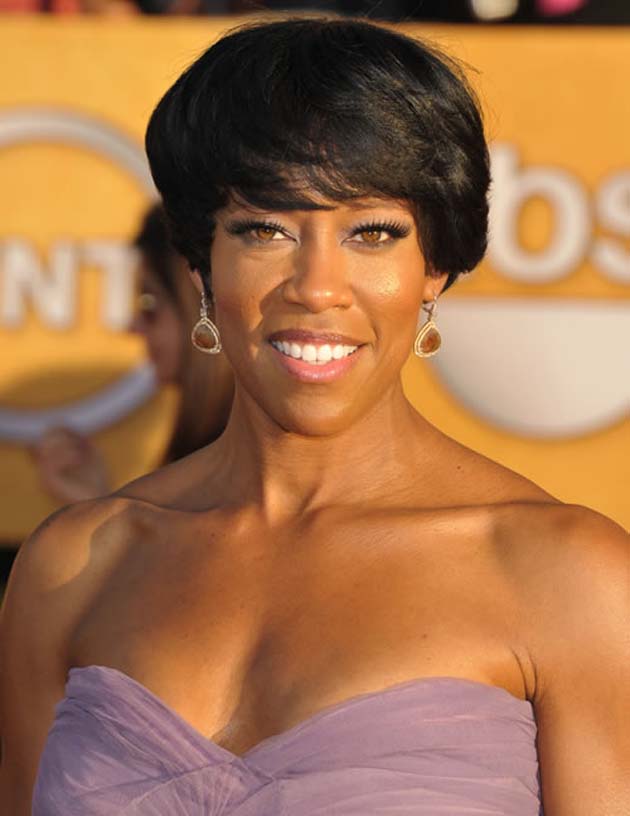 Actress Regina King arrives at the 2012 SAG Awards outside the Shrine Auditorium. This year, King acted as a hostess of sorts at the ceremony.

She is probably best known for her role as Detective Lydia Adams in the television series Southland.

Additionally, Regina King was one of the voice actors in The Ant Bully (2006), along with Meryl Streep, Julia Roberts, Paul Giamatti, and Nicolas Cage. 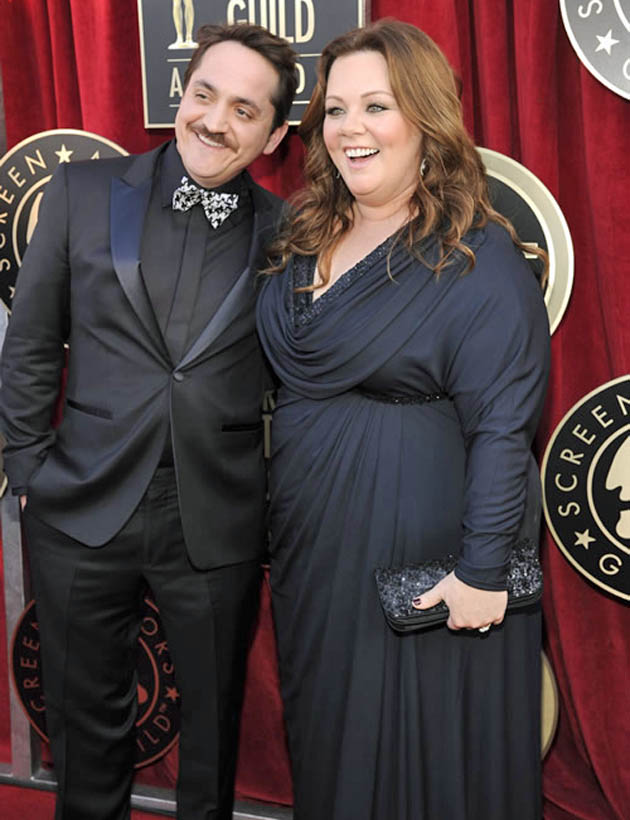 Octavia Spencer was the expected winner.

Melissa McCarthy was also one of the Bridesmaids cast members nominated in the SAG Awards’ Best Cast category. The others were:

Seth Gordon’s Identity Theft, in which McCarthy is to play opposite Jason Bateman, is currently in pre-production.